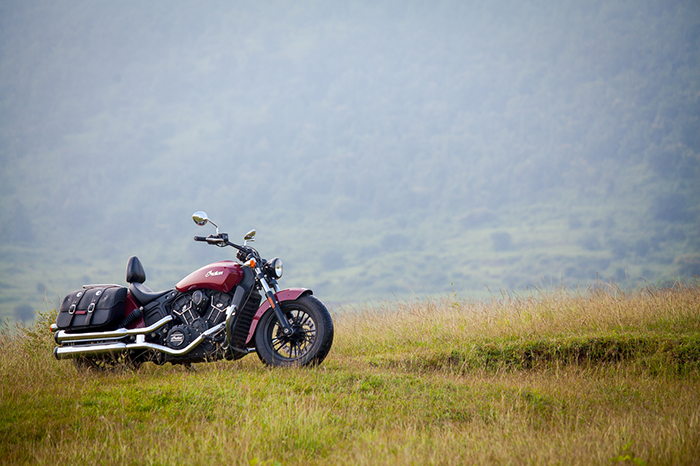 Excess is an American obsession. That they thought it wise to market a V16-powered Cadillac in the heat of the Great Depression should tell you much about it. You can gauge it by the average size of a serving of Coca-Cola, too. Or, more recently, by the undisguised extent of Donald Trump’s questionable wisdom. Size matters a great deal to the Americans, which should explain why their motorcycles, just like their hamburgers, are humongous without exception.

In the times of an unforgiving economic climate, however, downsizing has escaped none. Not even them Yanks. The globally pressing need to make everything leaner and more efficient has engulfed the motorcycling world, too. And the most recent victim of this phenomenon is Indian. No, I mean Indian, the iconic American motorcycle brand. This is a good time to introduce you to the Scout Sixty — the newest, smallest Indian on sale anywhere in the world right now. Those of you turning your nose away at this point, hold on — this isn’t exactly bad news. It isn’t bad news at all, as a matter of fact.

The Scout Sixty, to give you a brief insight, is more or less the proper Scout having shed eight inches of cubic capacity (the American measure for displacement; that should explain the cheeky sub-header and the ‘Sixty’ nameplate, although it should have been Sixty-One, for the sake of accuracy), a gear and some amount of chrome and kit. Why? Well, it’s all in the name of affordability although the implications of this leaning-down exercise have extended to its performance as well — thankfully, in a rather likeable way. Before we get to the meat of the motorcycle, however, let’s spare it a moment of appreciation for its irresistibly gorgeous design, shall we?

Parked in the backdrop of a picture-postcard-perfect sunrise, the Sixty looks every bit the stereotypical American cruiser it set out to become. Its lines flow without interruption, save for those by the jet-black accents and a tinge of tasteful chrome. The swept-back handlebar is now all black and a neat sissy bar with an ergonomically spot-on backrest separates the solo seat from the rest of its ample derrière. A chromed luggage rack is mounted on the rear fender — a thoughtful addition for the religious weekend riders amongst you. While it has skimped on a fair bit of chrome, the black finish that replaces it doesn’t look half bad, either. I quite like the stealthy appearance of it all, perhaps a bit more than I do chrome, to be honest. It’s subjective, of course, but it’s a job well done anyway.

With all the visual indicators of its newfound affordability out of the way, it’s now time to get to the meat of the transformation — the engine. Within the aluminium frame rests a 999cc, liquid-cooled V-twin motor — 200cc short of the Scout’s powerplant — although there’s no visible difference in how it fills up the neatly laid-out engine bay. There is, in fact, no real difference in how the 999cc motor sounds or feels in comparison to the Scout’s, either. That this is intentional (and remarkable) goes without saying since Indian’s fan base banks heavily on the quality and feel of its motorcycles. And they won’t be disappointed one bit.

Understandably, a trimmer was run over the engine’s output figures as well, bringing the power down to 77 bhp and snipping 0.9 kgm of torque while at it, bringing the tally down to 9 kgm. Not unimpressive figures when viewed in isolation; they’re still a lot healthier than most of its rivals’ numbers. What this revision has brought about in the real world, however, is a motorcycle that’s just as well suited to the highway as any other with an Indian badge. It has the same breezy, effortless character as the bigger Scout’s and, I suspect, if I didn’t know it was a smaller motor, I probably wouldn’t have found out right away. Not until I arrived at the higher reaches of its performance envelope, at least, but more on that in just a bit.

I’ll confess I could only manage a sub-200-km ride in the limited time I spent with the Sixty, but I owe it credit for making me comfortable with its mannerisms from the moment I thumbed the starter. The engine note is busier than you’d expect from a bog-standard V-twin and it reflects in the way it gathers steam as well. It’s relaxed but not lethargic; a nice, eager motor that can’t wait to get out on the highway. Gearshifts are butter-smooth, all the way up to fifth, which brings us to the only potential party-pooper in this exercise — the lack of a sixth cog. It was perhaps a necessary exclusion (to maintain status quo amongst Indian subscribers) and, thanks to the merits of the beautiful motor, doesn’t serve as much of a spoiler. Not unless you like 1000-km rides every weekend.

Because of the overall flexibility of the motor and the more or less spot-on gear ratios, the Sixty feels delightful as a highway hauler and, naturally, not out of place for a spot of boulevard bruising, either. I did find the low-speed rideability in fifth gear slightly disappointing (under 50 kph is a strict no-no) although it more than makes up for how gracefully it lightens up when you show it a set of fast twisties. It may not be fast enough for some of the more evolved highway riders amongst you, but none of you will ever accuse it of feeling agricultural — because it just isn’t. Quite unexpectedly, I rather enjoyed myself even on our regular handling course (which usually involves getting down on one’s knee sliders a lot), hitting apex after apex in an interrupted flow, with the cool morning breeze amplifying the soothing arms-wide-open riding experience. Sweet.

A lot of the Sixty’s likeable personality can also be attributed to its rather excellent cycle parts and setup, all of which take you beyond the restrictive horizons of cruisers as have been established in the past. It really makes a good rider out of you since there are virtually no losses in handling (or braking) that are otherwise standard on a motorcycle of this format. The way it leans over with absolute poise is addictive and you’ll be scraping pegs in no time. I did find the ultra-low-speed manoeuvrability slightly tricky, probably owing to the 1562-mm wheelbase — roughly 30 mm longer than the nearest comparable Harley-Davidson — but that, too, may only be a matter of getting used to. The Sixty is, without a doubt, the handling benchmark in its class and it’s something you just can’t help but appreciate.

Is there anything at all that’s not so likeable about it, then? Well, yes – the price tag. At ` 11.99 lakh (ex-showroom, Delhi), the Sixty is cheaper than the Scout by under a lakh of rupees, which is not that substantial a saving, especially from an EMI perspective. That it lacks ABS, chrome and a sixth gear may also put you off it, not only in comparison with the Scout, but also its fellow American rivals. Comparisons aside, however, the Sixty lacks nothing in terms of value or performance and that justifies its existence, regardless of what your bank loan executive tries to convince you with. It’s undeniably smaller, but not one bit less desirable, and that seals the deal for it. After all, it’s not the size of the buns but the flavour of the patty that makes a hamburger worthwhile, isn’t it?