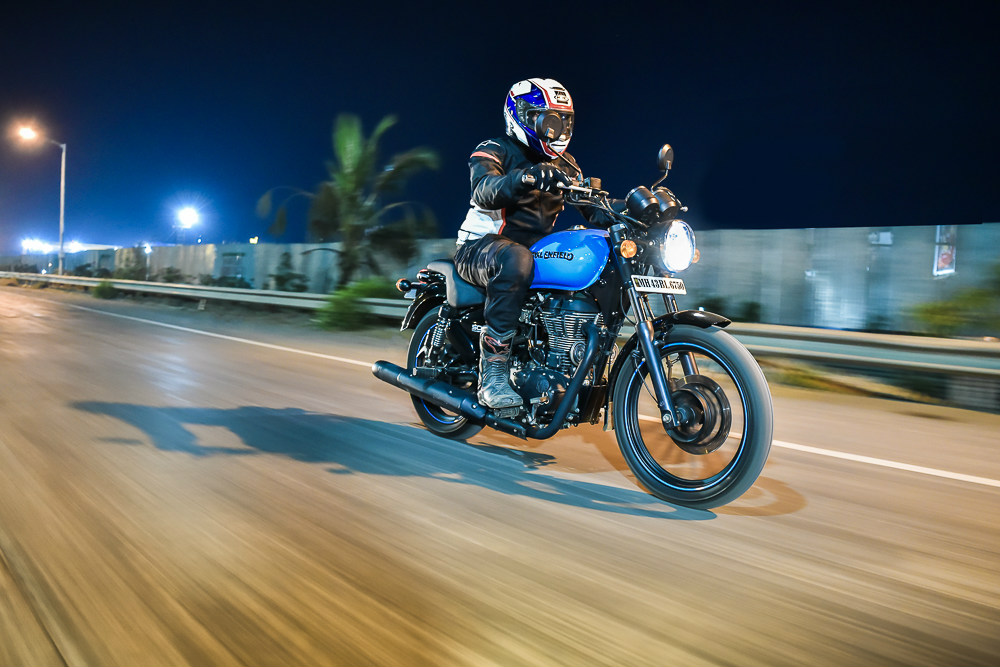 No matter how much criticism Royal Enfield gathers, it is the current undisputed king of the manufacturer hill. Whether you hurl a few curses towards obsolete technology, or moan about reliability issues, Royal Enfield is still selling more motorcycles than you can keep up with. And ‘keeping up with’ is the absolute key concept here. A lot has changed in this current crop of REs, and you’ve got a lot less to complain about. Or you could just try a little harder, you know, because just appreciating a motorcycle for what it is, is something we privileged lot tend to let slide so easily. 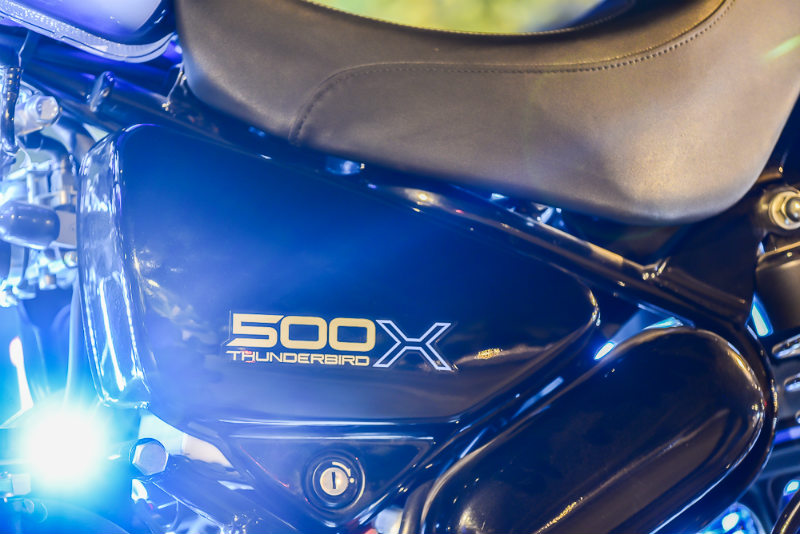 Enter the new Thunderbird 500X, a descendant of the Thunderbird 500 that’s got some new paint slapped on, a new seat, a new handlebar, and a set of alloy wheels. So what makes it so special then, if at all? Well, it would have to be the rather tasteful approach RE has taken in converting an already successful motorcycle into something more modern, youthful and urban friendly. While still keeping the retro feel around, of course. Rather tricky business, don’t you think? The devil is, as always, in the details. Or maybe Triumph’s Street Twin had a bit of a say in the matter. Either way, it appears RE is going to make the Triumph-Bajaj approach in 2020 a rather tricky one. 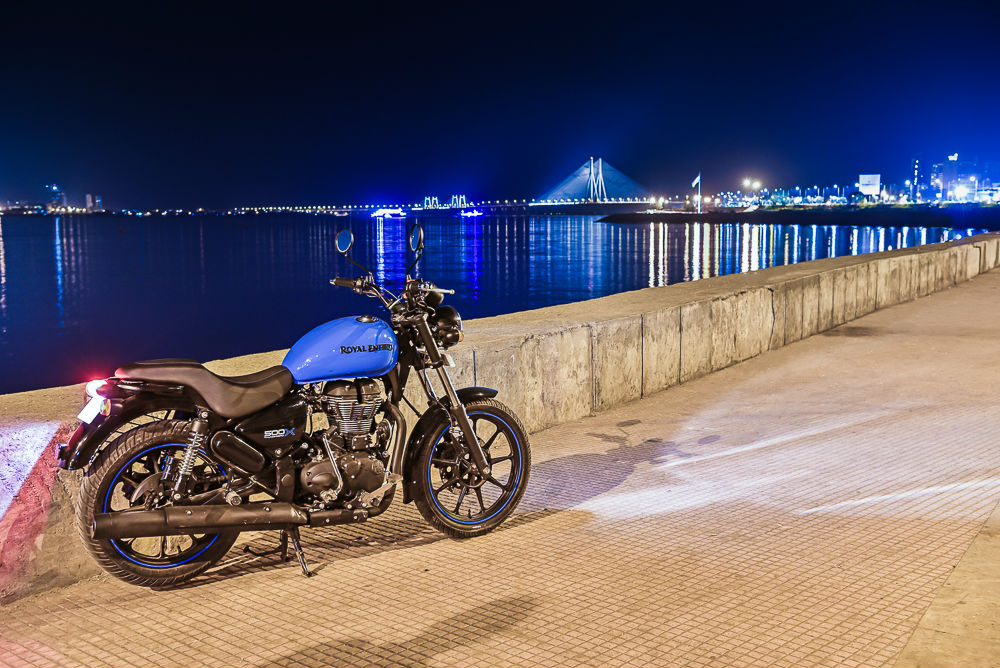 First off, although the silhouette has remained more or less the same, the shortened rear fender and removal of the pillion backrest give the 500X a more compact overall feel and stance. The new orange and blue paint scheme options the 500Xs come in are just lovely to look at, and as always, paint quality is excellent. There’s just a bit of exposed wiring around the fuel-injector area that’s a tad untidy. And based on the amount of Thunderbird 500 owners that opt for aftermarket alloy wheels, Royal Enfield has taken this step for them and added in the 9-spoke alloys. Again, looks are a subjective matter, and I personally think blacked out spoke wheels would have looked equally as good, if not better.

Of course, there’s also been a slight change in seating position. With the new handlebars, you tend to have a slightly more aggressive forward lean, which is great for making it a more involving ride. But unfortunately, the foot-pegs remain in the same forward biased position they were on the older Thunderbird 500. While it isn’t really a hindrance per se, it just makes the seating position a little awkward, which should get more pronounced with the decrease in rider heights. Tilting the handlebar a little closer to the rider should correct this, but it will also take away from the slight aggressiveness of the seating posture. 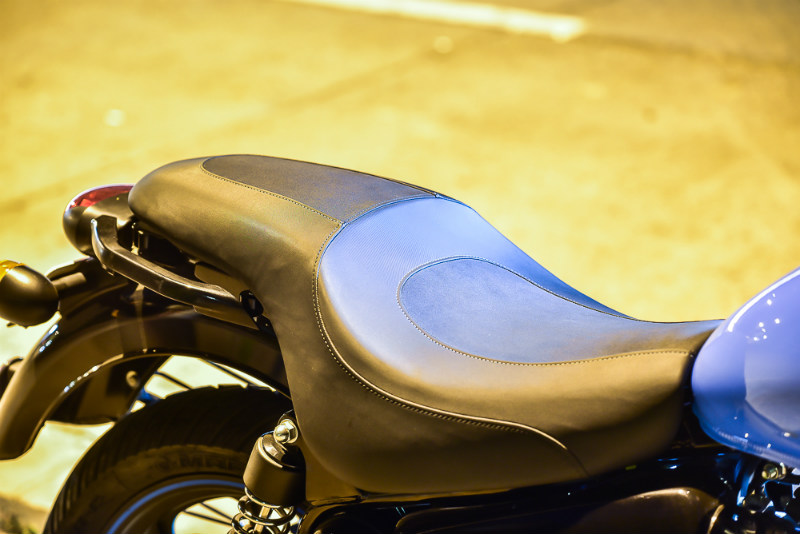 While the rider’s seat is wide, has decent thigh support and sufficient room to move around, the pillion seat has gotten rather diminutive in the pursuit of aesthetics. The new split grab rails are tucked away nicely under the seat. However, since the 500X has the same sub-frame as the regular Thunderbird, it should have the same mounting points for the grab rail; ergo the backrest from the Thunderbird can replace the grab rail and make the motorcycle more pillion friendly if the necessity arises.

Since the engine and other cycle parts remain the same as the regular Thunderbird, the 500X retains the friendly overall ride experience. But, as I’ve said before, the devil is in the details, and a lot has improved from the older generation Thunderbird. For starters, the ride quality, while always good over bad roads, has improved in overall stability. The 500X really encourages you to push deep into corners, with the weight of the bike actually working to its advantage here. The best part is you don’t really feel the weight of the bike when flicking about between corners. This is due to its low center of gravity, which sort of cancels out the vagueness associated with a 19-inch front wheel. 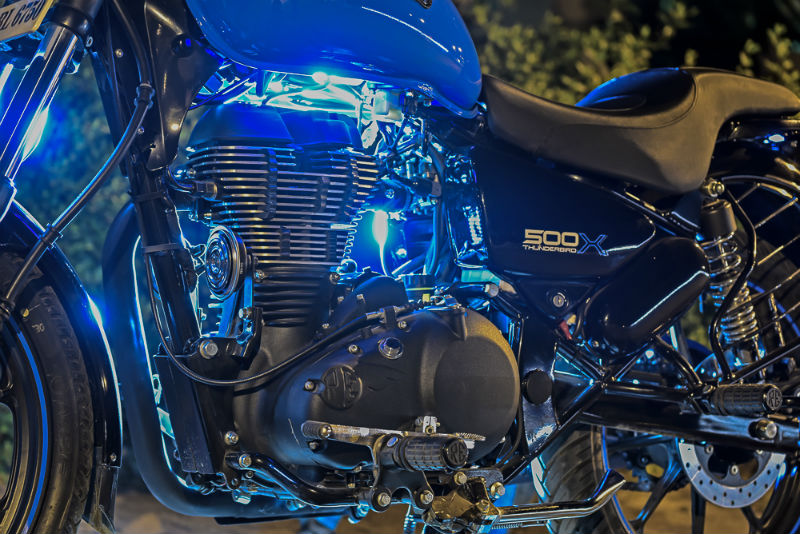 And the 500cc Unit Construction Engine has improved vastly over the first versions of this engine; fueling and power delivery have gotten a lot smoother. While newer riders may still fault the bike for vibrations, these aren’t bad vibrations in any way; what else would you expect from a big-bore, long stroke single cylinder engine? Even the gearbox has seen massive improvements. The shifts feel precise and solid, and gone are the false neutrals that used to plague Royal Enfield motorcycles. 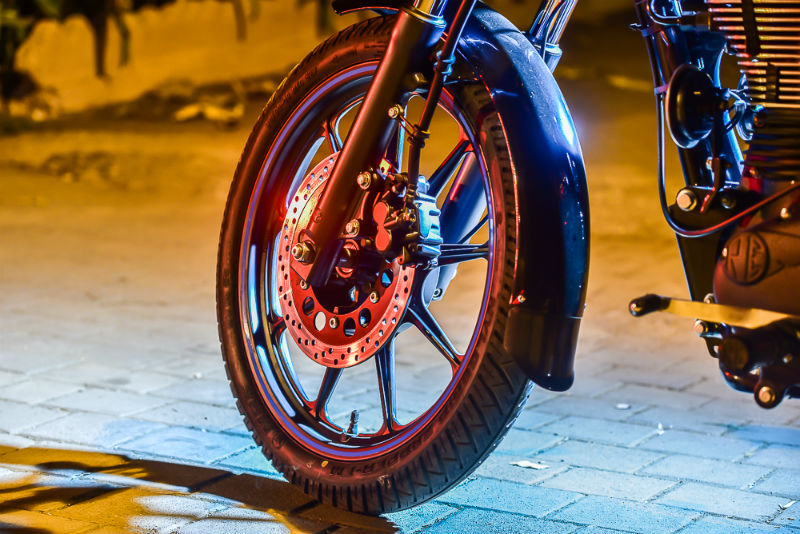 If you’re keen on an everyday motorcycle that sails over bad roads, has got the neo-retro image nailed down, and isn’t shy to touring the countryside, the Thunderbird 500X is a pretty neat package. For the amount of flak that Royal Enfield gets for producing outdated motorcycles, I must say I’ve walked away from this experience rather pleasantly surprised, and you will too. Especially if you’ve ridden some of the older Royal Enfields. And for a price increase of Rs 8,000 over the regular Thunderbird 500, this increase is quite justified; considering you now also get alloy wheels and tubeless tyres. Sure, it may cost a bit more than your regular budget cruisers like the Bajaj Avengers, Suzuki Intruder 150 and UM Renegades, but there’s no replacing the soothing feel of a torquey big single.