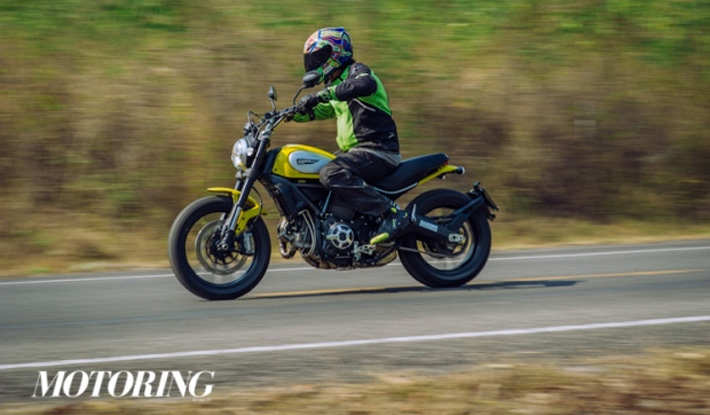 ‘Youth is wasted on the young.’ Only the ones with creaky bones and slowed reflexes will agree. Actually, it probably was one such individual that came up with that compellingly resigned phrase. I’d like to counter that with another phrase – motorcycles keep you young. And every once in a while, there comes along a two-wheeled fountain of youth that turns back the years once again, more than any current motorcycle can. The Ducati Scrambler is one of them. And, no, I’m not old enough to be saying this, at all. It’s just that it’s apparent even to a 31-year old me. A long gaze at the Scrambler is proof enough that time is increasingly marching on into the past these days. Perhaps we think that the present isn’t good enough and the future seems increasingly bleak, which is why we yearn for the good old days. Many things in these digital times seem to borrow a sense of legacy from a few decades ago – look at the Instagram logo. Things that were natural 40 years ago are now ‘cool’, and everyone’s trying to cash in on it. Though when it comes to motorcycles, that’s not a bad thing at all. And that’s why the Scrambler is a natural at being cool.

This motorcycle is far from being an example of mass-producing history to make a profit. This bike has got The Look. Simple lines fuse with spot-on proportions on this motorcycle. And it’s not all about looking old, either. The Scrambler’s got one wheel in the past and the other firmly in the future. The LED lights encircling the headlamp, for instance, might be a modern touch, but their X-shape is inspired by the taped headlamps of old racing bikes. Its lines might evoke the ‘60s era, but its quality and finish is very much modern. All in all, it’s unlike the Ducatis we’re used to. It borrows from the past to make the future. Its styling is near-perfect form, much like the naked statues of the ancient Italian masters. And the exhaust’s sound is like the chopped-off private parts seen today on said statues. Wind noise is pretty much all you can hear after second gear. It’s something I expected, yes, but not something I wanted on a bike like this. The Scrambler grunts eagerly to do your bidding, but I’d rather hear it roar through a pair of those optional Termignoni pipes. Now that my biggest complaint is out of the way, let me describe in one word what the Scrambler feels like to ride – complete. For what it is – a 75-bhp V-twin with a carpet-bomb approach to its audience – the Scrambler is amazingly fulfilling to ride.

Acceleration from the Monster 795-sourced motor is great enough to be fun without being scary. From its closed position, the throttle is a bit jerky, and quite a few vibrations make their presence felt through the ‘bar and the ‘pegs post-6000 rpm. The front brake lever has a more grabby initial bite than I expect. And the aggressive upright position makes my shoulders miserable if I keep it above 130 kph long enough. It’s almost as if there is an edge to the bike deliberately left in to remind you that it’s still a Ducati. But, boy, do I love riding this bike. On our ride, the photographers declare a 40-kph limit for all the action shots you see here. That isn’t the most dynamic of speeds to shoot at unless you’re off the road or riding off a cliff (which is most hardcore off-roading, I suppose). My point is, the bike goes much better than you can tell from the photos here. The Scrambler is a compact motorcycle with a riding position that allows you to move around as much as your limbs’ free play will allow. You can sit bolt upright or go into a flat-track crouch, depending on whether anyone’s watching or not. The tall and wide ‘bar gives you enough leverage to twist the front fork into knots, while the seat is perfect for commutes and short blasts. You’ll have to stop every 200 km on the highway to rest your backside, though.

No matter what Ducati says about relaxing and enjoying the Scrambler at moderate speeds, this is a motorcycle that likes to go fast – especially through corners. A look at the dual-purpose Pirelli MT 60 RS tyres might raise a doubtful eyebrow or two at first. However, the first set of corners will settle those eyebrows right back down and replace them with a greedy grin on your face. These tyres are quite impressive – they look the part and stick even better. Ride quality is firm but comfortable, though the rear monoshock seems better dialled in than the 41-mm front fork. Nothing to break your back, though. And, of course, the 186-kg Scrambler takes to the twisty stuff like a natural – it is a Ducati, after all. The corners come and go faster and faster with every passing minute. This bike is agile and surefooted on the move, giving you the confidence to dive-bomb every corner given half an apex. The front brake is more than enough to haul speeds back to sane levels, backed up by a sorted ABS. Ducati makes no great claims about frame geometry or chassis flex with this bike. It’s just a simple motorcycle that delivers so much more than you expect in a manner that is easy to handle. It’s an eye-opening honesty that makes me wonder why Ducati is trying so hard with all the marketing/branding shamanistic rituals.

Few motorcycles have seen themselves hyped to the lifestyle-moon and back like the Scrambler has. For me, it goes against the easy-going, friendly nature of the motorcycle. Should you fall for Ducati’s ultra-hyped marketing gimmicks? If you like stuff like that, sure, nothing wrong with it. However, I still cannot help but feel that it’s all part of Ducati’s refusal to admit that this is their new entry-level motorcycle. Rather than call it ‘entry level’, they say ‘land of joy’. Okay, then. Also, the team that made the Scrambler is a bunch of young guys that wear those tight, skinny pants that people wear these days. While I don’t care much for the tight pants, that sense of youth has definitely made it into this motorcycle.

The Scrambler costs the equivalent of Rs 5.87 lakh in Italy, though India-bound Scramblers will come from Ducati’s plant in Thailand. The prices haven’t been disclosed yet, but I think a Rs 6.2 lakh ex-showroom tag is fair. However, the unfair fact of Indian-motorcycling life called ‘import duties’ will probably make it a bit more than that. But look at it this way – after you’ve spent enough time with it, you can end up feeling ten years younger. Perhaps even twenty, if you’re old enough. I just wish Ducati wouldn’t try so hard to sell it with an all-out nuclear-marketing assault. Everyone’s going to love this bike. Age no bar.