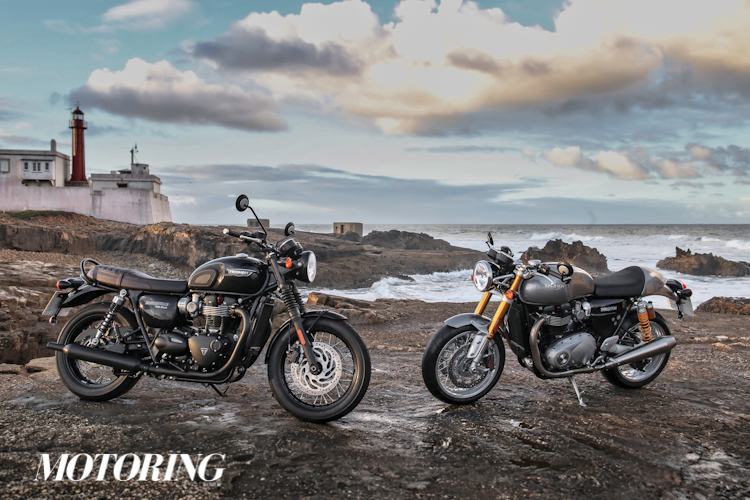 You know how there are certain bikes which cause irrational envy amongst friends? Or, like in my case, friends who are luckily colleagues? Let me give you some context: Kartik was supposed to go for this ride, but seniority brings in a lot more work so he grudgingly had to pass it on. Ruman was up next, but IBW and other rides delayed his paperwork which had Raunak jumping at the opportunity. Unfortunately for him, visa applications for Portugal from Mumbai are processed in Goa and there wasn’t enough time, so it fell upon me to go and ride the Triumph T120. And the Thruxton R. Around the gorgeous little town of Cascais, Portugal. Get the irrational envy bit now, don’t you?

Rational or irrational, the new Bonneville range seems designed to cause envy. A modern touch to its classic retro looks ensures that. Every element on the bike is a testimony to the fact that classic and modern can co-exist. Sounds like an oxymoron, but the guys at Triumph have managed to do it. The round headlamp comes with DRLs, the analogue twin pods are backlit and have two small digital screens, the carburettor cover houses twin throttle bodies with digital fuel injection and there’s a USB port to charge your phone, too. See what I meant by classic and modern co-existing?

The T120 Black is what we rode first, which technically is the T120 but with more of the colour than a Goth festival. And with the luxurious brown seat, it looks quite cool, too. The T120 features a 1200cc parallel twin that makes 79 bhp and 10.5 kgm. All of the latter is available from as low as 3100 rpm courtesy the new ‘High Torque Engine’ which debuts in the new Bonneville range. The difference this makes while riding is immediately noticeable at low speeds;  city riding is actually effortless. So much so that I  rarely had to shift down  to third gear for most of  the ride around Cascais.

The new engine is liquid cooled, quite essential for hot countries like ours, and it scores 10/10 for refinement. Unless you slow down to 10 kph in fifth gear, there are hardly any vibes or complaints from the motor. Ditto the ergonomics; the riding position is extremely comfortable and spot on. Unlike my more enthusiastic and fitter colleagues, I prefer a comfortable bike which doesn’t leave me sore after 30 minutes. We rode the T120 for a couple of hours and I could have gone the entire day without a break — it’s actually that comfortable.
The suspension is also set up for a comfortable ride, with a conventional fork up front and twin dual-rate shocks at the back. Again, I am not one who’d attack corners and complain about the bike being soft so I loved the way the suspension felt: soft in a positive way, as it gobbled up everything thrown at it, including cobbled roads and some mildly broken roads, too. That’s a big plus for our road conditions, I feel.

The T120 is also loaded with electronics which include ride-by-wire, traction control and two riding modes — Road and Rain. The good news is that both modes get full power; it’s only throttle response which is modulated. And there is a genuine difference between both. I started in Rain but was more than happy to ride most of the time in Road.

Talking about more happiness, next up was the gorgeous Thruxton R. If the T120 is true to its roots, the Thruxton R is true to the concept of the café racer. You know, the times when café racers were stripped down versions of street bikes — lighter, more powerful and oh-so-good-looking! The clip-on handlebars, aluminium bar-end mirrors, the Monza-style filler cap, brushed metal crank covers, gold bits on the engine, brushed-stainless-steel twin exhausts and a body-coloured seat cowl. The Thruxton R wins it hands down on the looks.

The looks kind of raise the bar even before you start riding — and the ride takes the bar even higher. The Thruxton R features the ‘High Power Engine’, with 96 bhp and 11.2 kgm taking performance to a higher plane of existence. About 10 kgm of all that torque is available from as low as 2100 rpm removing any doubts about how the bike behaves at low speeds.
The Thruxton R comes with three riding modes — Rain, Road and Sport. Like the T120, all modes get full power and it’s just the throttle response that differs. The Triumph guys told us to choose modes carefully on the Thruxton R and they were right. The difference between Rain and Sport is like me punching you and Mike Tyson punching you. Sport could literally knock you out, while Rain has enough to keep you awake.

For all practical purposes and decent fun, Road is the mode to choose; 160 kph comes up in a flash and the bike is happy to go faster. However, the cross winds on the motorways near Cascais were a bit much to handle at higher speeds so I chose to cruise rather than push the bike. The upswept exhausts with reverse-megaphone end cans deliver an exhaust note which is great company.
Once we turned off the motorway onto the twisties, the balance and handling of the Thruxton R was impressive. The suspension, fully adjustable on both ends, comprises of the 43-mm upside down Showa fork and a pair of Ohlins at the back and is set up well enough keep the bike sorted. The custom Pirelli Diablo Rosso Corsa tyres (120/70 ZR17 front and 160/60 ZR17 rear) are a perfect fit, too, and gave more than enough confidence to a lazy rider like myself.

The real ride for me on the Thruxton R began when we were heading back around sunset. A small miscommunication separated me from the group and I was left to speed through back roads on my own (all within legal limits, of course). A couple of miles later and quite far from the original destination, I realised the obvious — I was lost. With no connectivity or a physical map, but a lovely bike, I rode on to find my way to Cascais. The first five people I asked for directions did not speak English but looked appreciatively at the Thruxton R, while I tried to distract them with my pleas for help. No luck.

Next up was a rider on a Honda VFR who spoke English, but wanted to talk only about the Thruxton R. After he stopped gushing, he gave me directions to the hotel and wished me luck. All that time on the Thruxton R, over expressways and through towns, made me realise how capable and comfortable the bike really is. It is happy to smoke others or putter around, all without a wince. The riding position and suspension, both more committed than the T120, are not uncomfortable. It’s an honest bike, making its intent clear through its looks and delivering on its intent through it specs and performance. No masks here; what you see is what you get, which is something to treasure in the current world.
Talking about treasures, the T120 is priced at Rs 8.7 lakh (ex-showroom, Delhi), though the T120 Black is not coming to India. Prices for the more desirable Thruxton R haven’t been announced yet, but we expect it to be around Rs 10.5-11 lakh, ex showroom. It may seem like a lot of money for the power figures on the spec sheet, but it’s worth every rupee if you value character and heritage. So, do you?