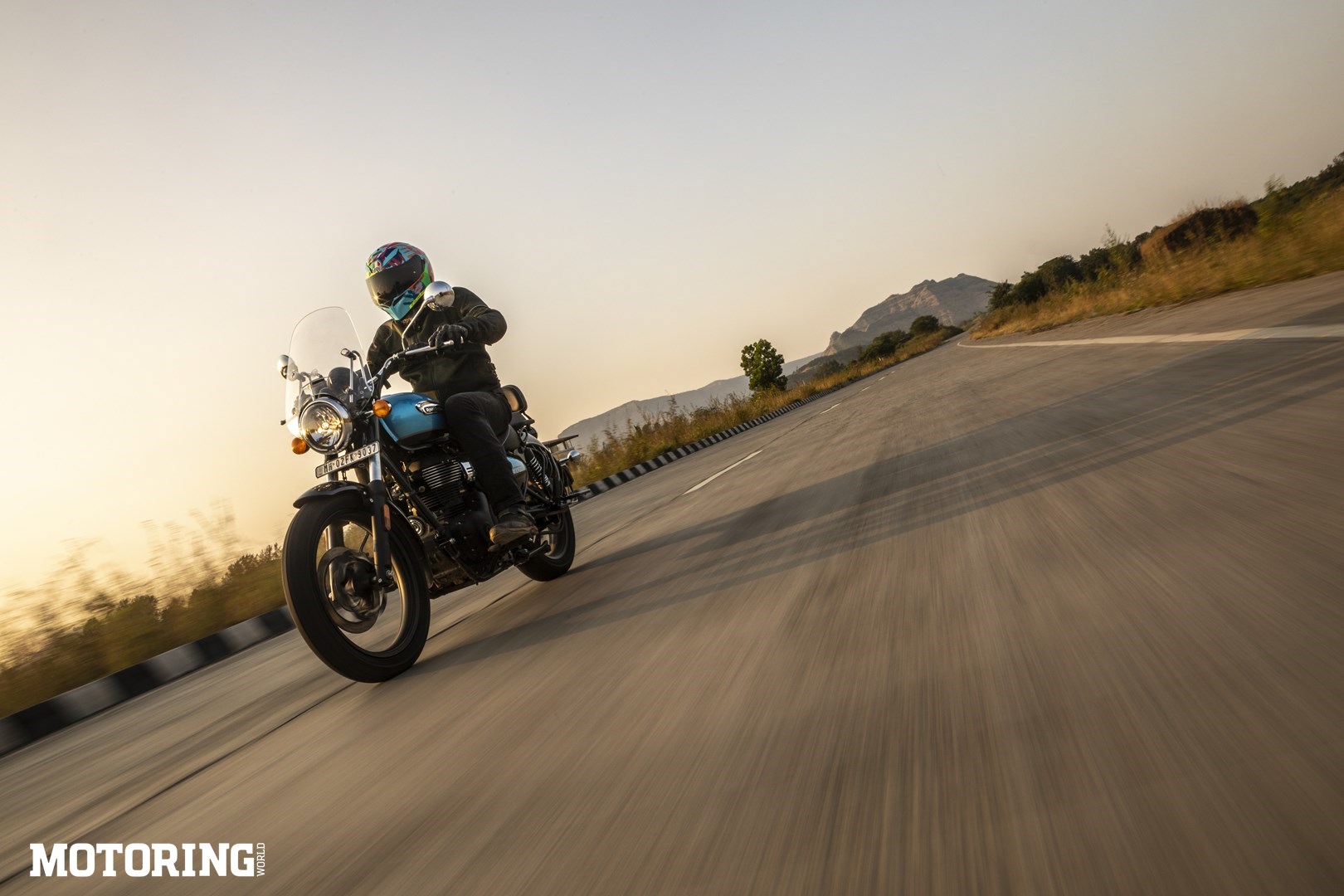 It’s been a long time coming and the Royal Enfield Meteor 350 is finally here. Your first assumption might be that it’s just the Thunderbird with a new name, but that’s not quite the case. You see, the Meteor 350 is the Thunderbird’s successor, and RE went back to the drawing board with this one and built it from the ground up. And given the worldwide praise the manufacturer’s got for its 650 twins, it sure gives us something to look forward to with its reinvention of the 350. The Meteor 350 marks the inception of a new generation of RE motorcycles, sharing its platform with future single-cylinder models. But first things first — how good is the all-new Meteor 350?

Is it a looker?
While looks are a subjective matter, the Meteor 350 is not a bad-looking motorcycle at all. The one here has a dual-tone livery made up of metallic blue and black with grey pinstripes which looks gorgeous and is eye-catching. There’s a circular headlamp with a bezel-type LED DRL flanked by amber turn signals, and a large windscreen (additional accessory) above with a slit to allow cool air to pass for the rider. The split seats are wide, and are shaped and finished well with white piping; stylish and comfortable to sit on. The blacked-out engine, retro tail-lamp, multi-spoke wheels and sufficient quantity of chromed bits give the Meteor a balanced appeal of a retro motorcycle with a dash of modernness. The only eyesore here, in my opinion, is the rear mudguard which looks unnecessarily bulky, taking away from the overall proportions of the motorcycle.

What’s great about it?
Lots, I tell you. Starting with the build quality, it is up by several notches and is as visible as it is tactile. The clutch and brake levers are chunky, while the dial-type switches for the ignition and toggling the headlamp beam look and feel made for a long life. The same goes for the instrument console which doesn’t have a tachometer but displays all other necessary information including time, gear selected, and fuel level. The bigger unit is accompanied by a small pod that provides turn-by-turn navigation updates via a smartphone app, too. However, the main talking point is the all-new single-cylinder 349cc mill.

In comparison to the outgoing engine, the new one is a lot more refined and slightly more responsive, too. Peak power output, at 20.2 bhp, is only marginally up from the older one, but that doesn’t matter because the ones who will ride this motorcycle will be more interested in smooth and linear performance from a healthy chunk of torque which this engine manages well at 2.75 kgm. I was comfortable cruising at 40 kph in the city in top gear, riding a refined wave of torque while making my way through traffic. Out on the highway, given the beans, the motor felt more eager to build speed at the higher end of the rev band. However, since the motorcycle had run less than 100 km and I didn’t want to abuse it, it still managed to enter the triple digits without much drama. For most of the time, though, I was cruising at 80-90 kph which I genuinely enjoyed, and that’s also what most people will want to do with it. 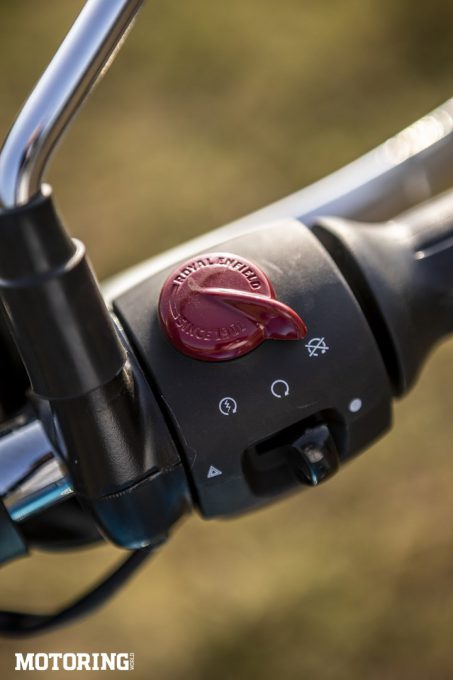 Speaking of riding, the Meteor 350 doesn’t demand a lot. It has a wide handlebar that feels right for cruising out on the highway as well as making your way through traffic in the city. The seat height, at 765 mm, is comfortable and apt for flat-footing, and riding the Meteor 350 around corners doesn’t feel like a task as the weight has been balanced well. From slow-speed turns to attacking fast sweepers, the Meteor sticks to the intended line with poise. And when the time comes to drop the anchors, there’s a strong bite from the brakes with adequate progression. 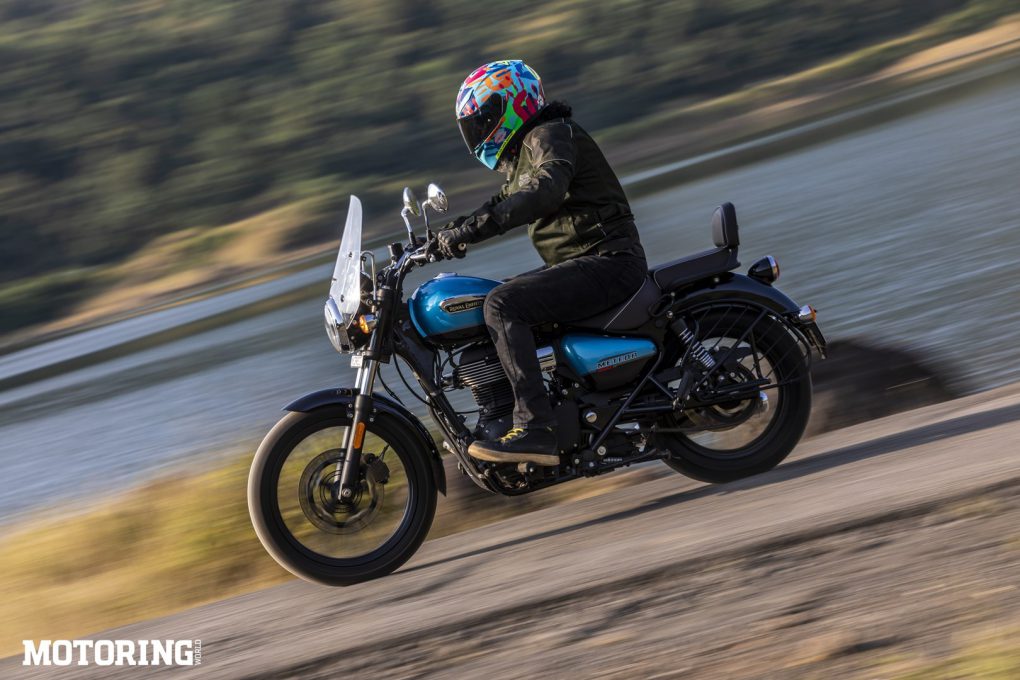 What’s not so great about it?
Now, no motorcycle is flawless and neither is the Meteor 350. But thankfully, there was only one thing that bothered me — the footpegs and the reach for the foot controls. While the location of the forward-set ’pegs is an issue, what also bothered me was that they are flat and not inclined towards the rider. This made reaching the foot levers hard to reach without a good stretch of the ankle. However, I believe that with some adjustments, this issue should get better. 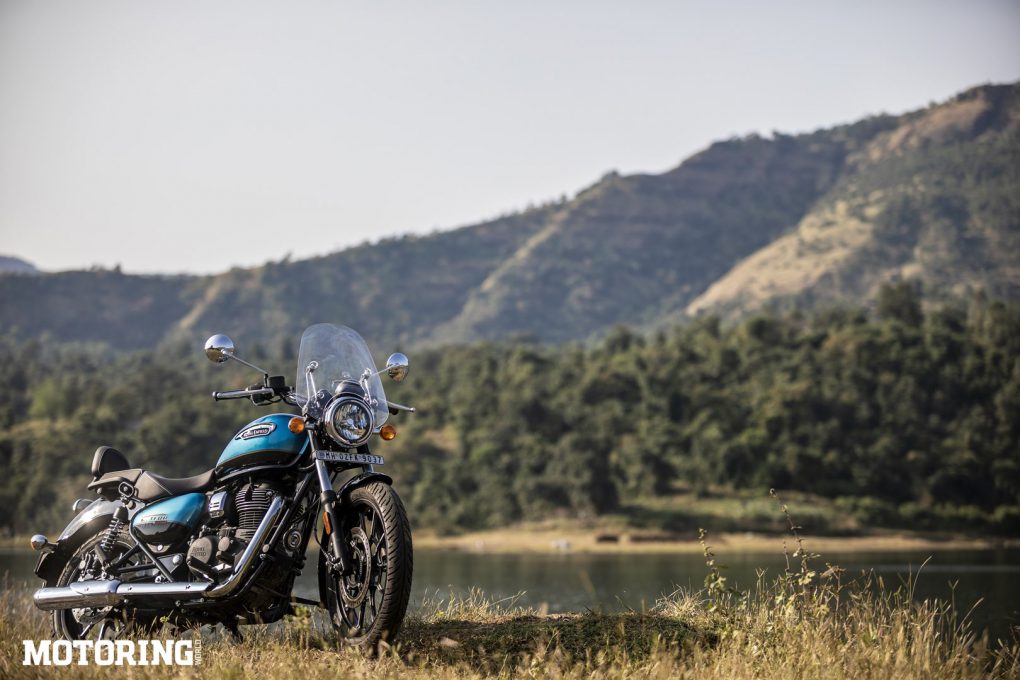 And the last word is?
The Meteor 350 might be the T’bird’s replacement, but it’s the all-new 350cc motor that has got to live up to a lot of expectations ahead. It will be the baseline for the manufacturer’s later models and the direction for the company’s future. While I have a strong feeling for the new-age Royal Enfield, and am impressed by its refinement and poise, only time will tell how well buyers accept this new platform and motor. I, for one, feel that they’re going to love it.