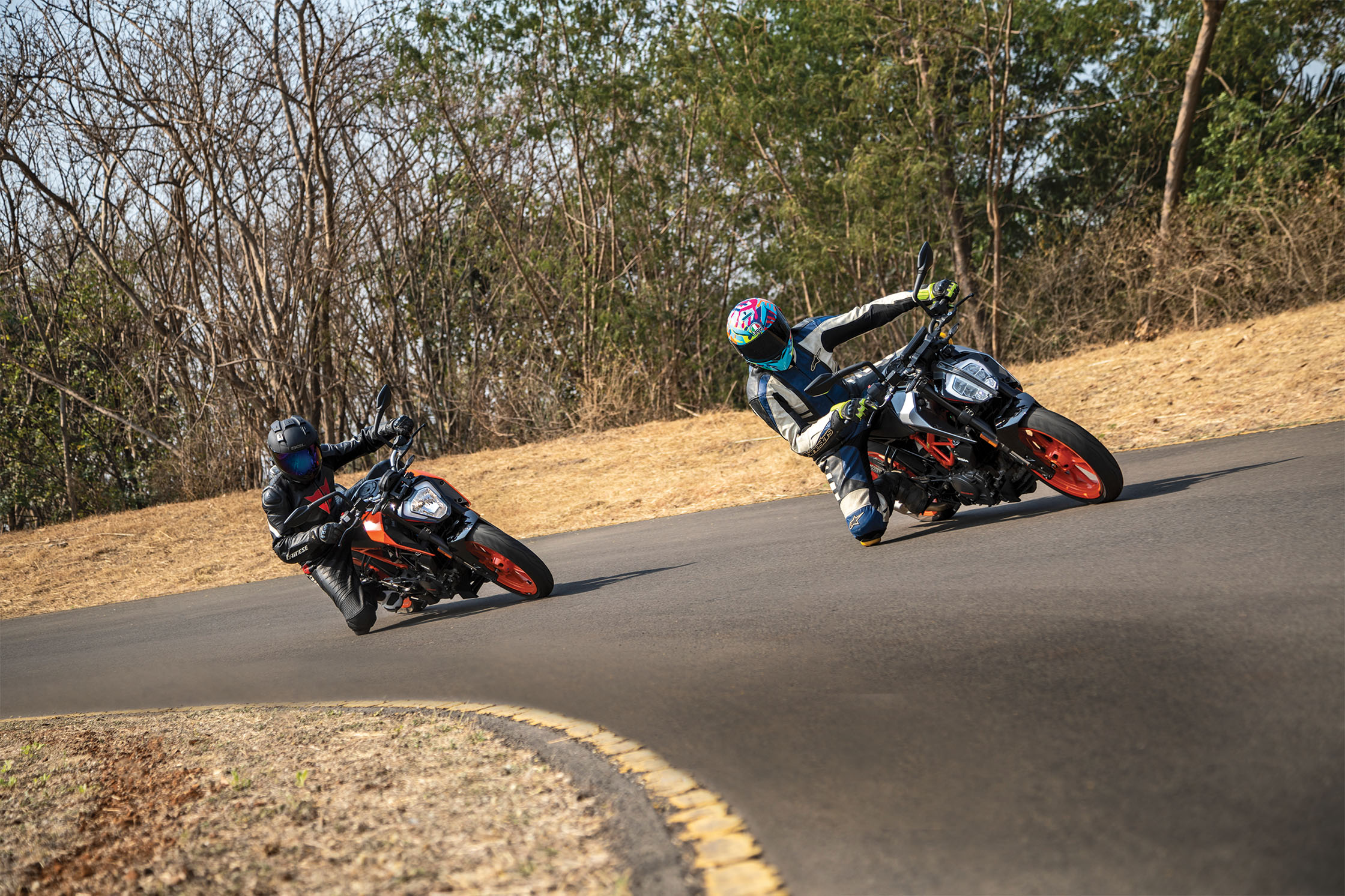 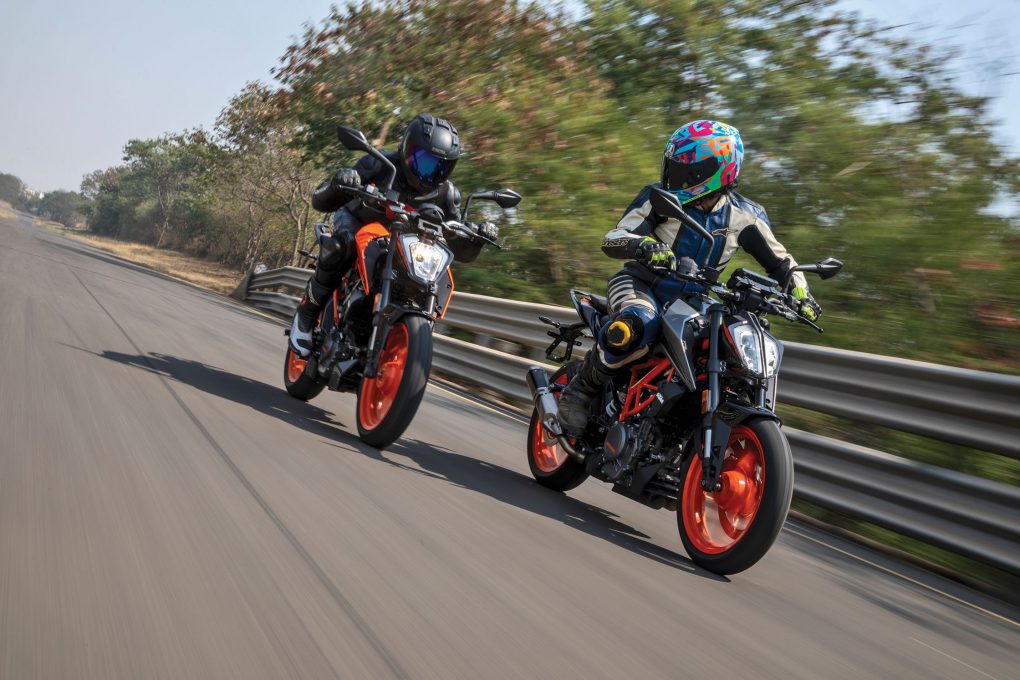 As much as we love motorcycles, they are merciless towards one another. Whether it’s the sales charts or lap times, there is always going to be a definite winner or loser. And, as it goes with every pair of siblings ever, this violence is all the more earnest when it shares a gene pool. The 200 Duke was the first KTM in India, launched in 2012, and the 390 Duke followed in 2013. These are the machines that cemented KTM’s reputation as the maker of some of the most vigorous motorcycles India has ever seen. And while the 200 Duke is still the largest-selling KTM in India, its popularity never helped when it came to showing big brother up on tarmac. Now, with the BSVI 200 and 390 Dukes, has that margin reduced? Long story short, nope.

Yes, the 200 Duke now gets the emperor’s old clothes, leaving only the 125 Duke wearing the original small-Duke outfit. And you might even wonder where that leaves the 250 Duke, now that the new 200 duplicates its likeness at a lesser cost, but that’s why I began this story the way I did. In any case, this seems to be a part of KTM’s strategy, periodically launching and alternatingly updating models to keep them relevant. In any case, this leaves us with a 200 Duke that now looks like the 250 and more like the 390, and as you can tell that’s no bad thing at all. That’s because, on the showroom floor, anyone can repeatedly hear the line, ‘It looks the same, so why spend more money?’ 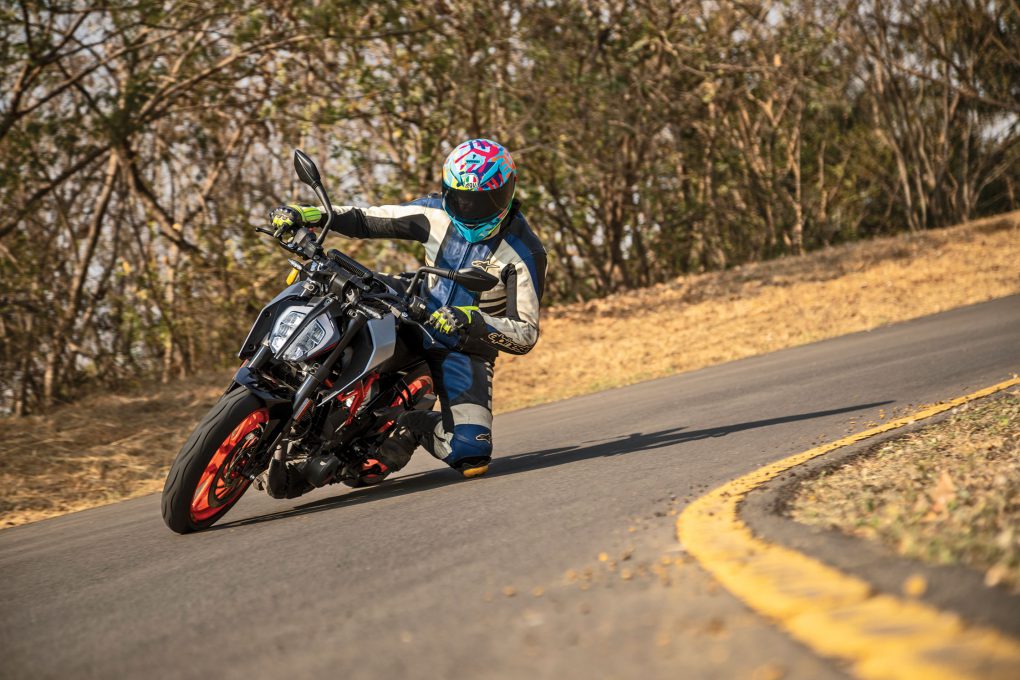 The 200 Duke’s new-old appearance is something that you’re already familiar with, so I won’t bother rehashing my words from the 250 Duke story. But I have to mention the new colours that now drape the KTM range including the RCs — they all look smashing. The 390, especially, in that silver-grey shade looks stunning. Power outputs for both remain the same, but the bigger Duke loses 24 mm of ground clearance thanks to the exhaust header pipe now being routed from under the engine, gains 4 kg, and also gets the niggly quickshifter first seen on the 390 Adventure. But it’s the 200 Duke that has changed a lot; it’s longer, wider, taller, with 20 mm less ground clearance, and weighs  11 kg more than the older version. Doesn’t sound too good, does it?  Not to worry. 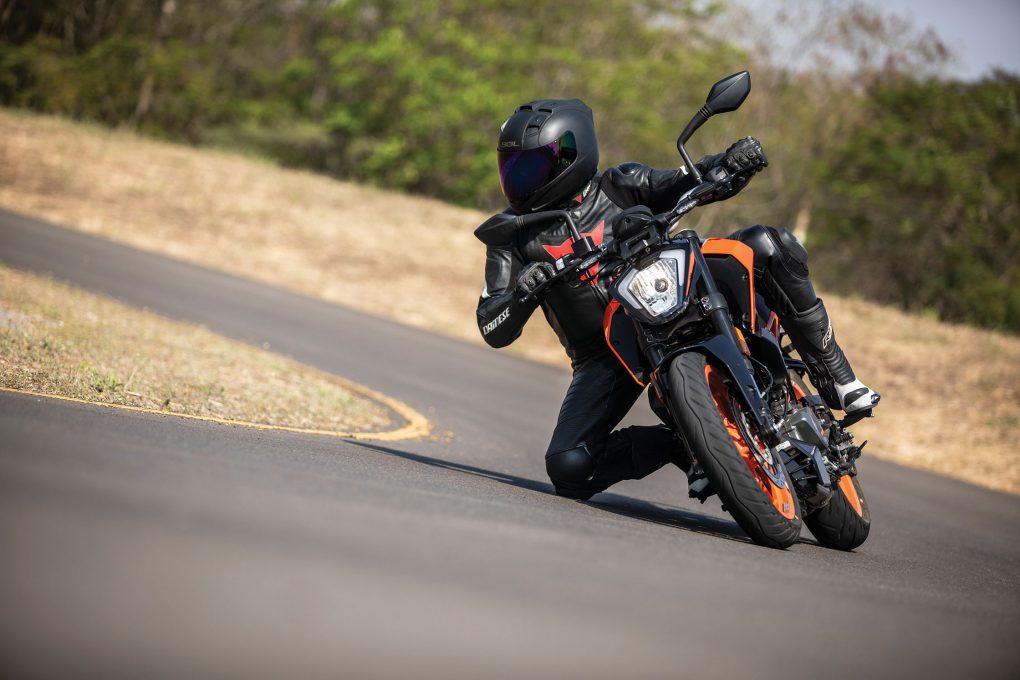 The importance of comfort on a motorcycle cannot be overstated. So while the 200 Duke may have put on some holiday weight, it is now a much easier bike to ride faster (and longer, too, with its tank that holds three more litres of fuel). The riding position is now similar to the bigger Dukes; it’s comfortable and sporty, but with a lot more room to move around on the bike — none of that wedged-into-place feeling as on the older Dukes. This makes the 200 Duke far easier to control than before, which also means that that engine can be treated with far more abandon than before.

The 200 Duke doesn’t get the open-cartridge front fork legs of the 250/390, so handling, even if it’s more stable now, is still a rather lively affair. It was all the more apparent once I got off the 390 and onto the 200, and in the first fast corner, I nearly steered myself off the track. The 200 Duke nose is still as sharp as ever, and it remains eager to dive into corners, enough to make the 390 seem almost drowsy, even. But then it’s never a good idea to poke the big guy too much, is it?
Even if the 390 Duke makes up a fraction of its mind, it leaves the 200 behind in a most comical manner. It’s as if only the 390’s world suddenly hits fast forward, while an invisible hand holds the 200 back. With my un-aerodynamic shape on each, the 200 Duke hit a top speed of 131 kph, while the 390 Duke showed 151 kph, before each ran out of road. But the 390 was already more than halfway around the test track by then, threatening to humiliate little brother by lapping it. The 200’s enhanced dynamic capabilities cannot overcome the sheer might of the 390 Duke. At least on the track; the street may be a different story.

And it will be a different story, too, as I fully expect both Dukes to scrape their undersides way more often now, thanks to the reduced ground clearance, though I hope I’m wrong. Also, the 390’s quickshifter is either too sensitive, cutting ignition at the whisper of a touch, or it doesn’t work at all, so I ended up ignoring it for the most part. I’d much rather not have it at all and save the money instead. But that’s really it for the complaints. Because once the fun begins with the Dukes, it does not end.

We spent more time than ever going around corners at ever-increasing lean angles, faster and faster, confident that the Dukes had our backs. In the middle of corners, both the 200 and the 390 show their common DNA, destroying knee sliders into the sunset. The 390 does it with more finesse, sure, thanks to its better suspension and tyres, but the 200 is right there, being the annoying smaller sibling who latches on to the bigger one. And cries its heart out into its redline once the elder Duke decides to get away. The smaller Duke might’ve gotten here first and will remain the more popular of the two, but the 390 still remains a portal into a different world of speed, a far grittier one in which it goes chasing giants. So even if the 200 Duke’s grown up a bit, big brother will always noogie it at will.