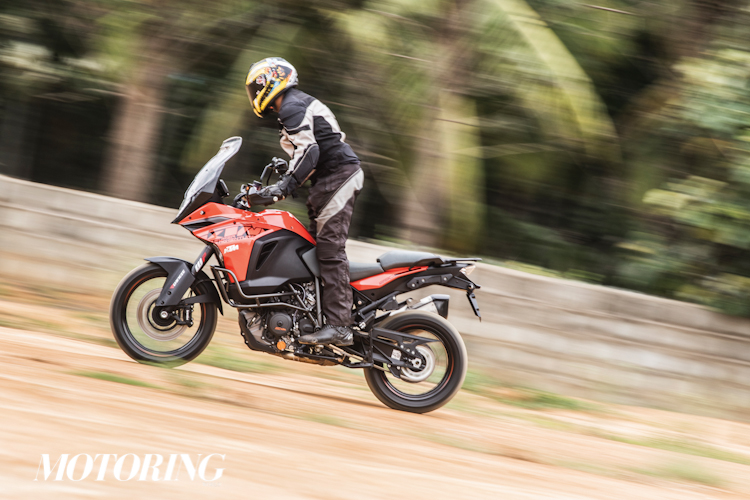 It’s on days like these that I wish I’d lugged my passport around in my back pocket. I think I could easily live down the guilt of having stolen the motorcycle you see here, never mind the slight inconvenience of trying not to be spotted on something this large and this orange. I’d bribe my way past the nearest international border and thereafter, live a life fuelled by taking up odd jobs in exchange for food and beer, perhaps finally settling in an agreeable part of southern France. I would weave baskets, mend shoes, wait tables and contract terrible diseases all the while knowing that the next morning, I’d have a few hundred miles to ride. Shouldn’t have mentioned that bit about France, though. Now they’ll know where to  find me.

Today is not that day, unfortunately. Instead, I’ve been handed over the key, only for a few hours, to what is one of the most serious dual-sport adventure motorcycles in the world — the KTM 1290 Super Adventure. This is KTM’s largest on/off-road motorcycle in every sense of the word and as I walk up to it, I realise it’s as tall as I am. Not the friendliest of introductions, I’ll confess. It shares its engine, suitably tuned, with the rather fearsome 1290 Super Duke R and gone into its making is over six decades of experience in building some of the finest, most fun-to-ride motorcycles the world has ever witnessed.

This thought amplifies within my helmet as I approach a right-angled corner, a bit faster than would be legally permissible. Here’s a motorcycle that makes the Triumph Tiger look small and can go around the world on a whim and here, now, is a rider less than half its girth pretending it’s a 390 Duke. It’s all happening too fast, but I can see it in ultra slow motion. I brake very, very hard, leg out in anticipation to catch a slide if it goes all wrong, the Adventure tips in as if it were a supermoto. The tail (the bike’s, that is) does a wiggle, the wide handlebar’s ample leverage allows for easy counter-steer and without anything of a fuss, we’re already powering out of the exit, the front going visibly light under acceleration.

I didn’t expect this kind of agility from a motorcycle with a rally fairing so vast, it can serve as a refugee camp. The BMW R 1200 GS, an all-time favourite, certainly didn’t feel this lively when Kartik and I rode it about four years ago. I remember it with clarity, especially thanks to the expression of fear on the face of a hapless BMW representative who watched from a distance as I nearly dropped it onto one of its cylinder heads. The Super Adventure is as big, if not bigger, but it has that wild edge thanks to the KTM badge on its flanks. You could give KTM any format of motorcycle — from a learner-class street-biased single to a Paris-Dakar-winning big twin — and you can rest assured, it will always provide a very high degree of fun. Hey, ever thought of making a Diavel-style muscle bike someday, KTM?

The Super Adventure’s true purpose, however, isn’t to provide cheap thrills to a naive supermoto fanboy. It’s one of those motorcycles on which you can circumnavigate the planet in a T-shirt and jeans. It’s big for a reason — to accommodate a 30-litre fuel tank, all your worldly belongings and your favourite family member — and it’s made of very serious stuff. The engine, a 1301cc 75-degree V-twin uses a twin-spark-plug layout which helps iron out fuelling and throttle response inconsistencies associated with older KTMs. It runs four valves per cylinder and all of three oil pumps, making the engine capable of dealing with intense stress levels over extended periods of time. The 6-speed transmission is slick but not numb as on the BMW GS and the gear ratios are understandably well spaced out for those long commutes to the source of the river Nile.

What gives you even less to worry about are its output figures — 158 bhp and 14.2 kgm. That is a lot of grunt for any format of motorcycle and certainly more than adequate in the rough stuff, even after considering its 229-kg kerb weight (fuel not included). With four riding modes, from the sane ‘Street’ to ‘Rain’, ‘Sport’ and ‘Off-road’, to put it in order of aggression, disengageable ABS and traction control, you can probably become the first person to go around the world without a single spill. That’s a bit optimistic, I understand, but it certainly won’t be the bike’s fault. Not when you remember it’s got a really long-travel 43 mm upside-down fork and an easily setup gas-charged monoshock, apart from the 19/17-inch front and rear  wheel combination.

Sounds brilliant? Wait till you see how it all works! Astride its 860-mm-tall seat (can be raised to 875 mm at best; optional heating feature, too), a Mahindra Scorpio I shoot past looks small. The engine’s in a comfortable spot of its powerband, just around 6000 rpm and the rate of acceleration is simply phenomenal, magnified by the bike’s overall dimensions. I guess it’s a bit like what those car guys experience in a Mercedes-Benz G63 AMG. There’s no escaping its size, but the animosity you’d associate with it certainly dissipates in no time. That’s what’s brilliant about it because, as a rider, it makes you feel good. Nobody expects a motorcycle that looks like this to be friendly and athletic. But once you’ve warmed up to it, you can do exactly the kind of stuff that makes videos go viral on YouTube and your friends, thereafter, will turn into fans.

You can hold it in third or fourth gear all day long if you like, or hammer through the gearbox like your pants are on fire and the Super Adventure will do both with distinct expertise. Off the road, things get even more impressive because it is just so controllable (even on street-spec tyres), no matter what flash of inventive stupidity envelops you. The throttle is most intuitive, the brakes return excellent feedback and the spot-on riding ergonomics mean more often than not, you’ll be able to save the day when things go a bit too slideways. It’s extremely aggressive, the Adventure, but it’s not hostile. As far as ego massages go, then, the Super Adventure is clearly one that will guarantee you a happy ending (ahem!). It’s simply a fantastic motorcycle, more so for its willingness to surprise than its near-invincible go-anywhere ability.

Do you really need a near-300 kph motorcycle that does the same job as an aircraft, only much slower and costs as much as a suburban Mumbai apartment? Probably not. But unlike air travel, which is the most hateful of human inventions, seeing the world from behind the visor of the Super Adventure will change the way you look at life itself. It’s never really about needs, but always about chasing dreams. It may get tiresome, being bitten by insects you’ve never heard of and waiting tables at an Indian restaurant in Coventry, but the thousands of miles you will have traversed will define who you will be for the rest of your life. Needless to say, my passport’s permanently in my riding jacket hereafter.