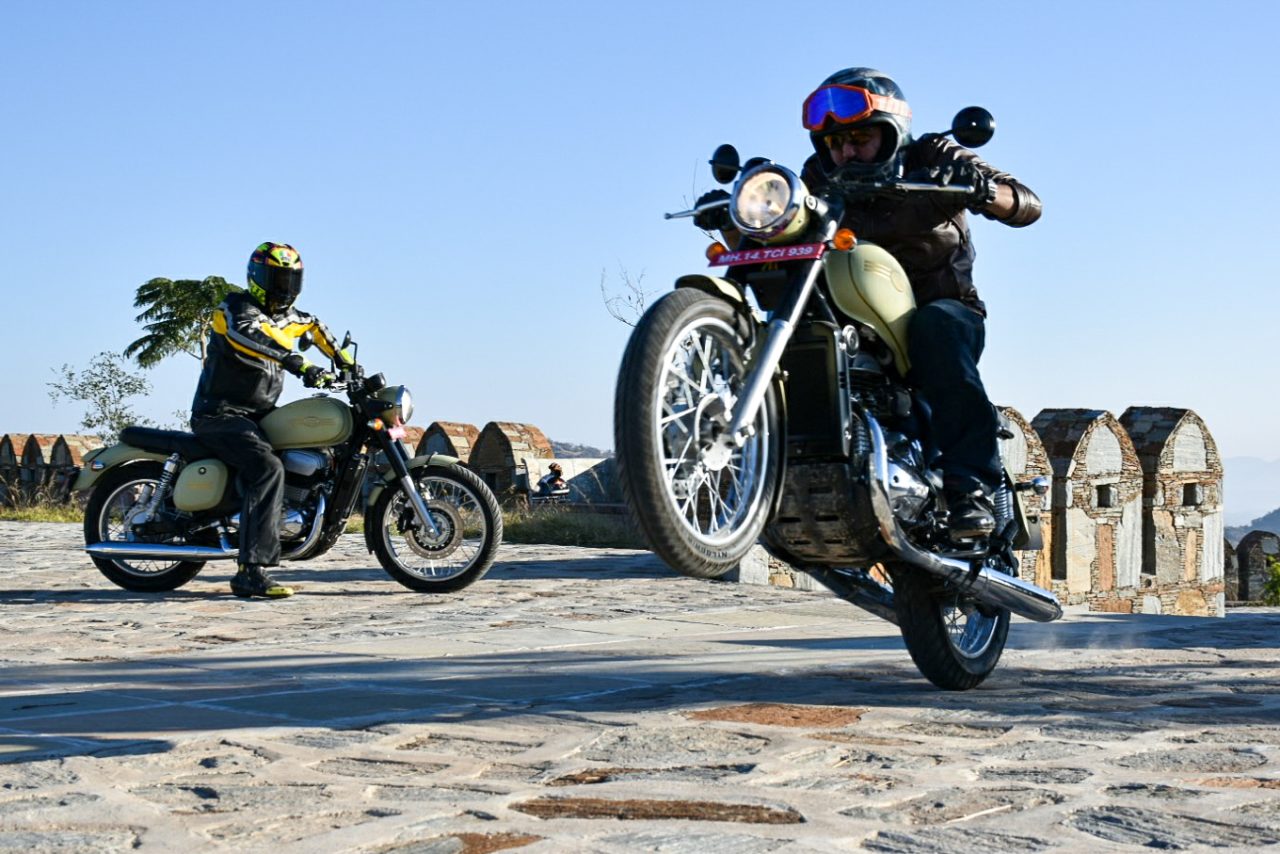 I’ve spent too much time around Jawas and Yezdis for my own good. The numerous scars on my limbs caused by old metal bear solemn witness to that fact. And each one of them has been worth it because those bikes are just too beautiful and soulful to not have in my life. And that same magnetism is what the new Jawa reborn under Classic Legends aims for in a world that is vastly different than the one in which the last Jawa and Yezdi rolled off their assembly lines in Mysore. You wouldn’t guess that by looking at the new Jawa, though. 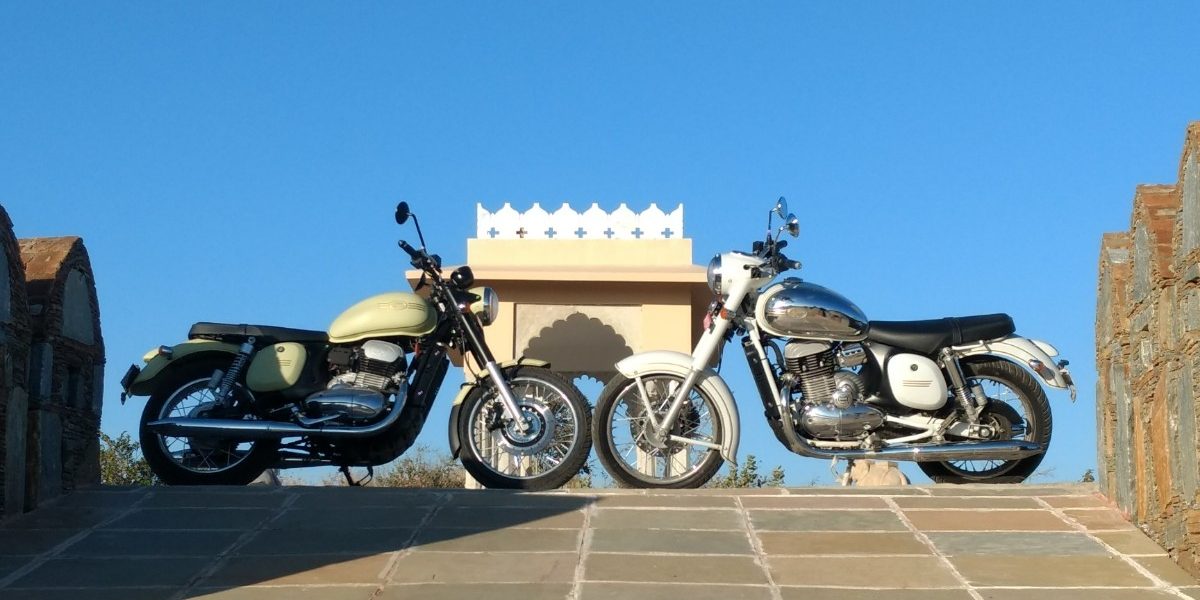 The Forty-Two is the more modern-looking one of the two with its colour choices, offset speedometer, flatter handlebar and a simple round headlamp. It looks pretty good, actually, but in most opinions at the ride, it can’t hold a candle to the classic Jawa. That bike is simply gorgeous, no matter which colour it wears with its chrome. And it’s so visually faithful to its two-stroke ancestor, I could cry. 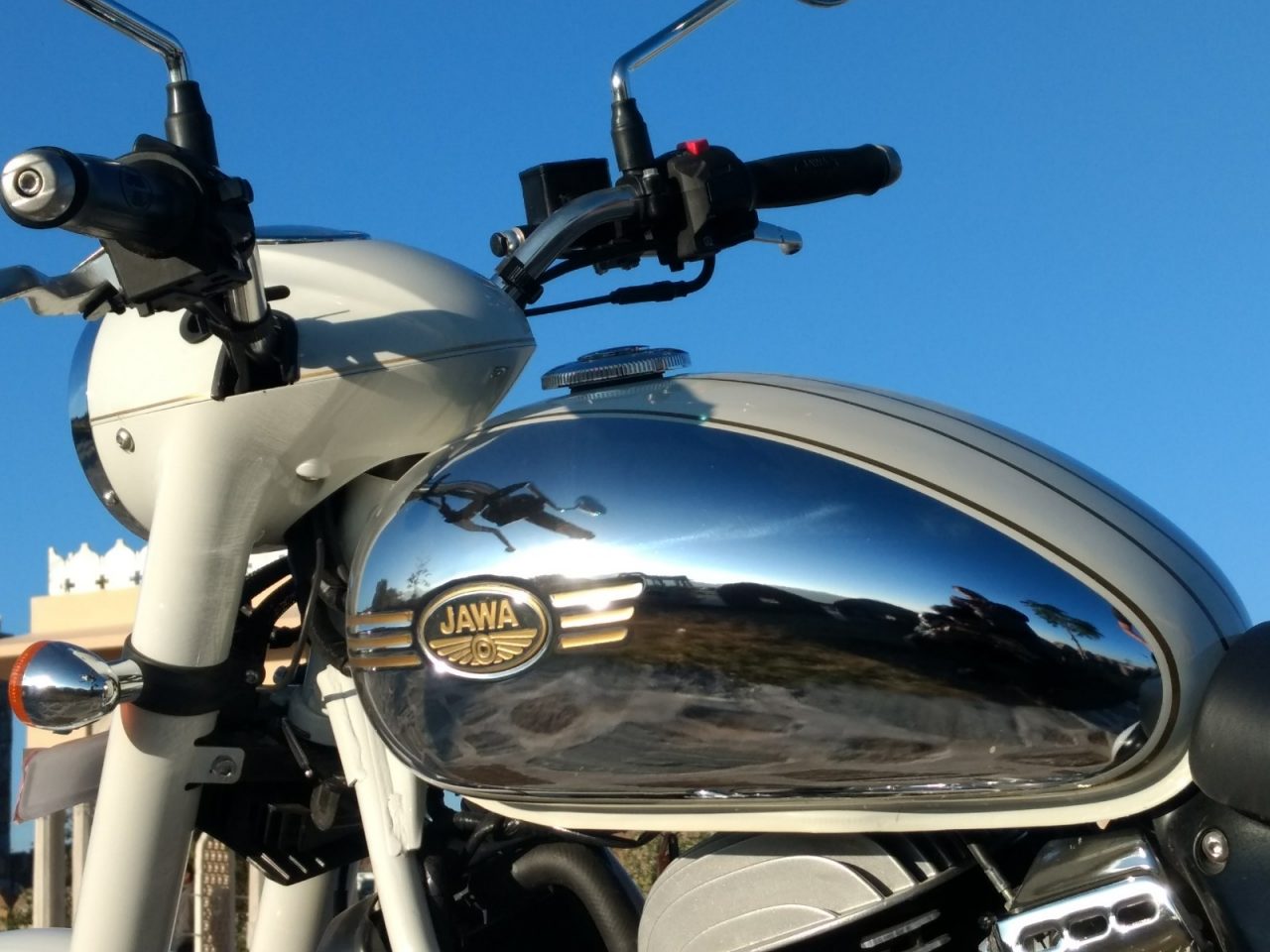 That headlamp nacelle sits high and proud ahead of the beautiful chromed tank, backed up by panels and fenders that echo shapes of the distant past, right down to that lovely tail-lamp. And, of course, there are those lovely twin exhaust pipes, although a part of the header pipes at the front is actually a shroud to hide the fact that both pipes head into a common catalytic converter underneath the motor. Nonetheless, it’s nostalgia sitting pretty on two wheels. And that’s where it ends for the references to the past. 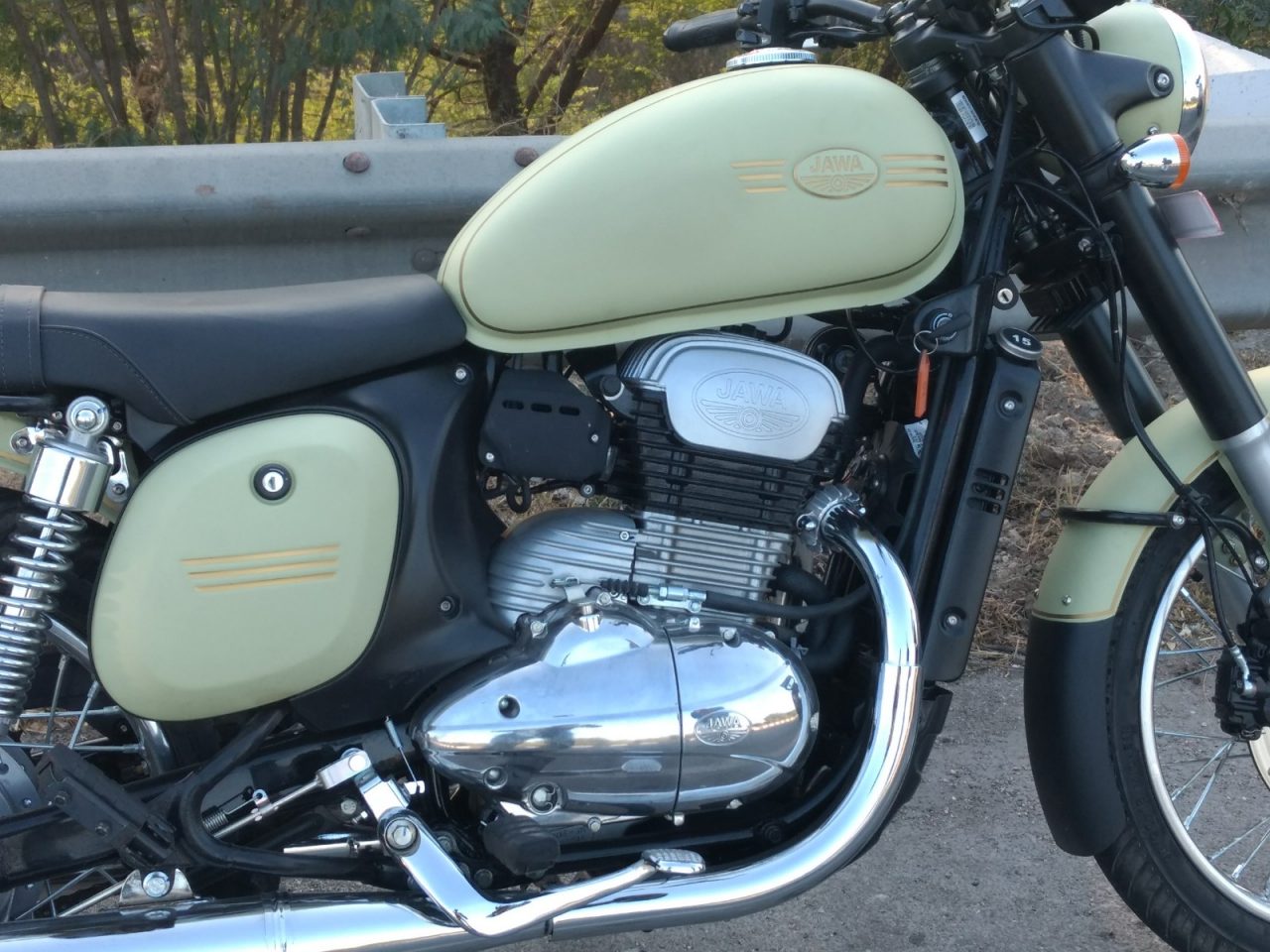 You see, the name is legendary, the looks are a hit, but a four-stroke motor was never going to recreate the smoky aura of a two-stroke, and we all knew that. So the 293cc liquid-cooled motor based on the Mahindra Mojo’s engine had the huge responsibility of convincing people that it belongs in this motorcycle. And I’d say that it does an excellent job of it. Okay, perhaps it doesn’t have the aural quality that one would expect from a motorcycle/s like this; despite Jawa’s tuning of the stock exhaust sound, I feel the bikes don’t quite have the right sound to match their appearance. But the exhausts do come with baffles which can be adjusted in five different positions to make the sound more interesting. Also, the 6-speed gearbox seems a bit too busy for a bike like this; five well-spaced cogs would’ve sufficed, I think. But that’s about the only nits I can pick when it comes to the motor. 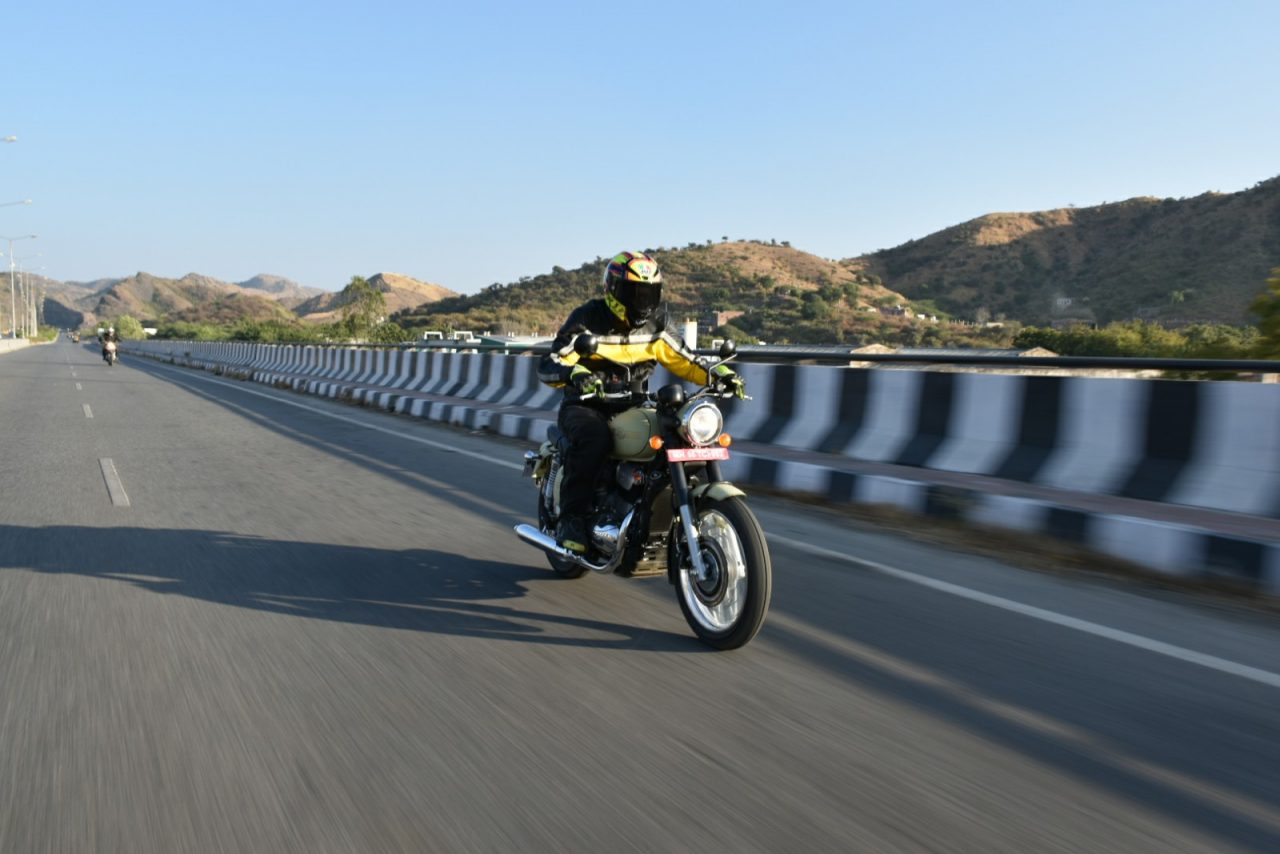 On the road, the Jawas offer you 27 bhp to play with, but you’re much better off surfing the smooth edge of the 2.85-kgm wave of torque. The Jawas are very clearly tuned for bottom-end and mid-range performance, and this makes them very flexible bikes to ride in the city or on a twisty road. Top-end performance is satisfactory, too, with many riders at the ride managing to crack the 140-kph mark on the speedometer. I didn’t feel the need to go past 120 kph, though, because the bike feels smooth and best below that. Also, when revved hard, the Jawas do throw some vibes at you, especially through the footpegs, so it’s best not to pretend that these are race replicas. What they’re best for is flowing along with the road and scenery, maintaining a brisk and constant pace. However, there is a difference between the two bikes. 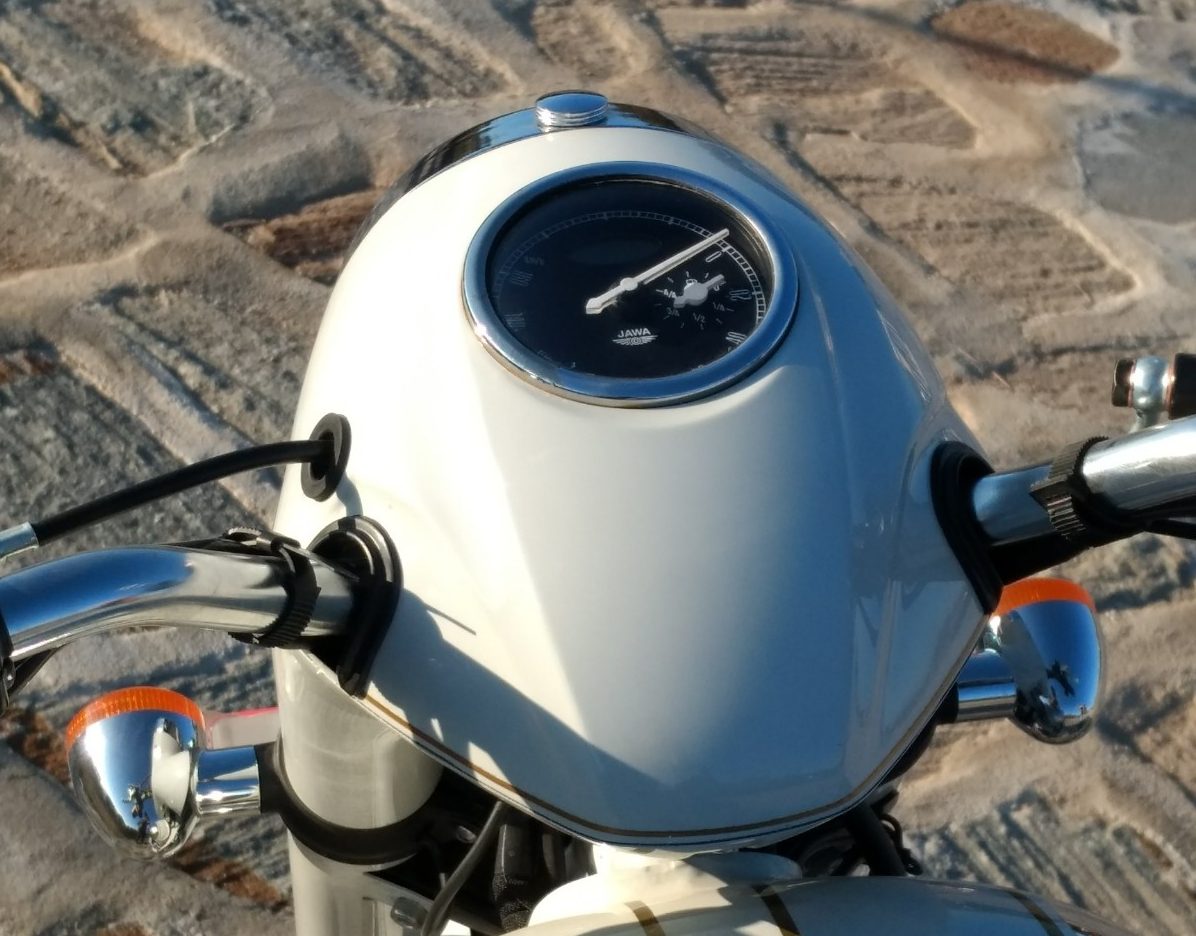 The different handlebars and the different view of the top of the motorcycles’ headlamps from the respective seats makes for different feels, too. On the Jawa, the handlebar is taller and closer to the rider’s reach, and it’s a very comfortable place to be in. Sure, many riders complained that the seats on both bikes are a bit too hard, but I didn’t mind them all that much because I prefer seats that are on the firmer side. On the Forty-Two, the handlebar is flatter and wider which makes it decidedly sportier than the Jawa. And, entirely unexpectedly, I preferred the Forty-Two’s riding position to the Jawa’s. And it terms of riding experience, the Forty-Two does have a slight edge over the Jawa, even though it may all be down to just increased leverage through the wider handlebar. Because when it comes to handling, both bikes are pretty much evenly matched. 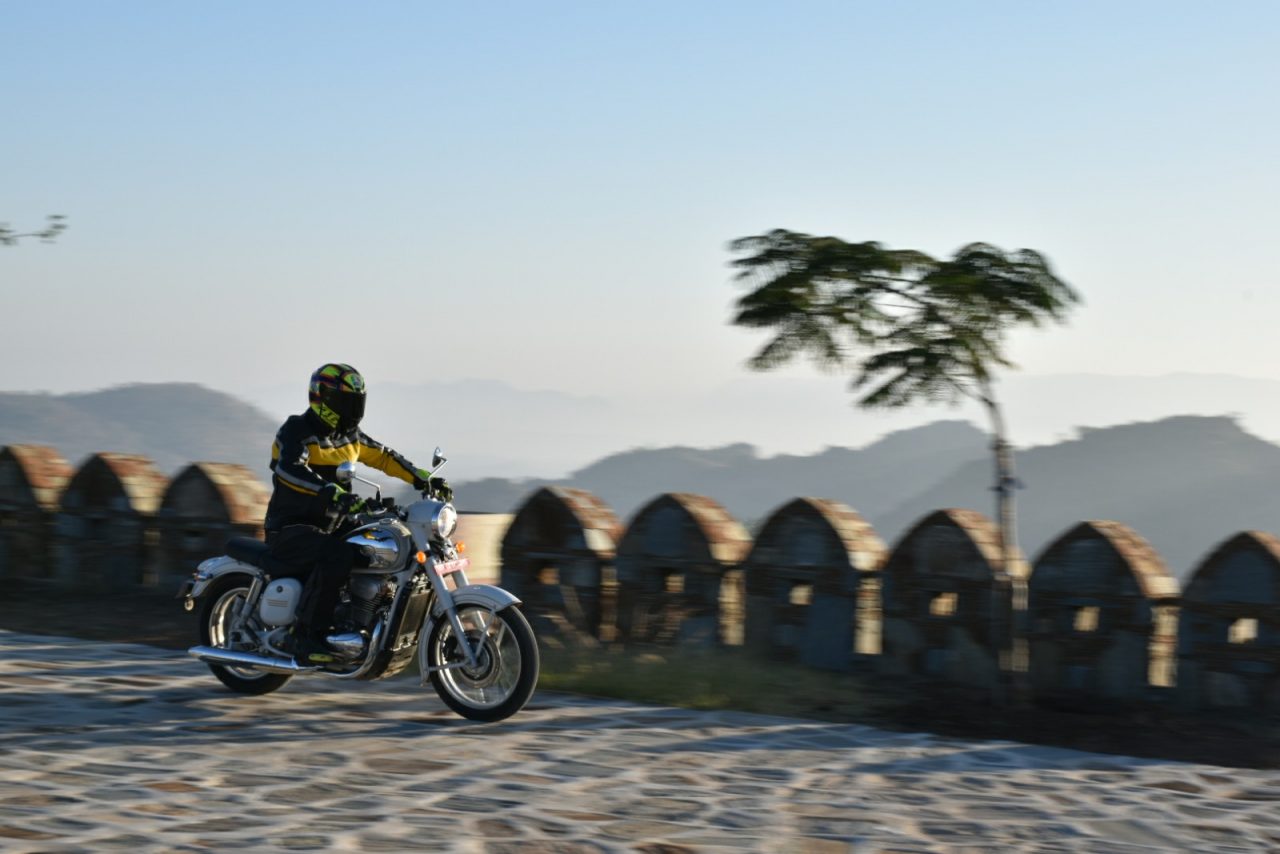 The suspension setup on both bikes is identical, and ride quality on both is good. We rode quite a bit over rough roads and the Jawas handled it all rather well. I have to highlight how ‘one piece’ the bikes felt everywhere, be it highways or back roads. It’s a good sign for the bikes’ longevity, too. The front brake comes with ABS, while the rear is a drum; that might strike many as odd, but I don’t think it’s a big deal. The brakes are strong and reliably bring the Jawas to a halt without any drama. Also, for the naysayers,  Jawa will inevitably have to offer a rear disc with ABS as well, so don’t start whining just yet. 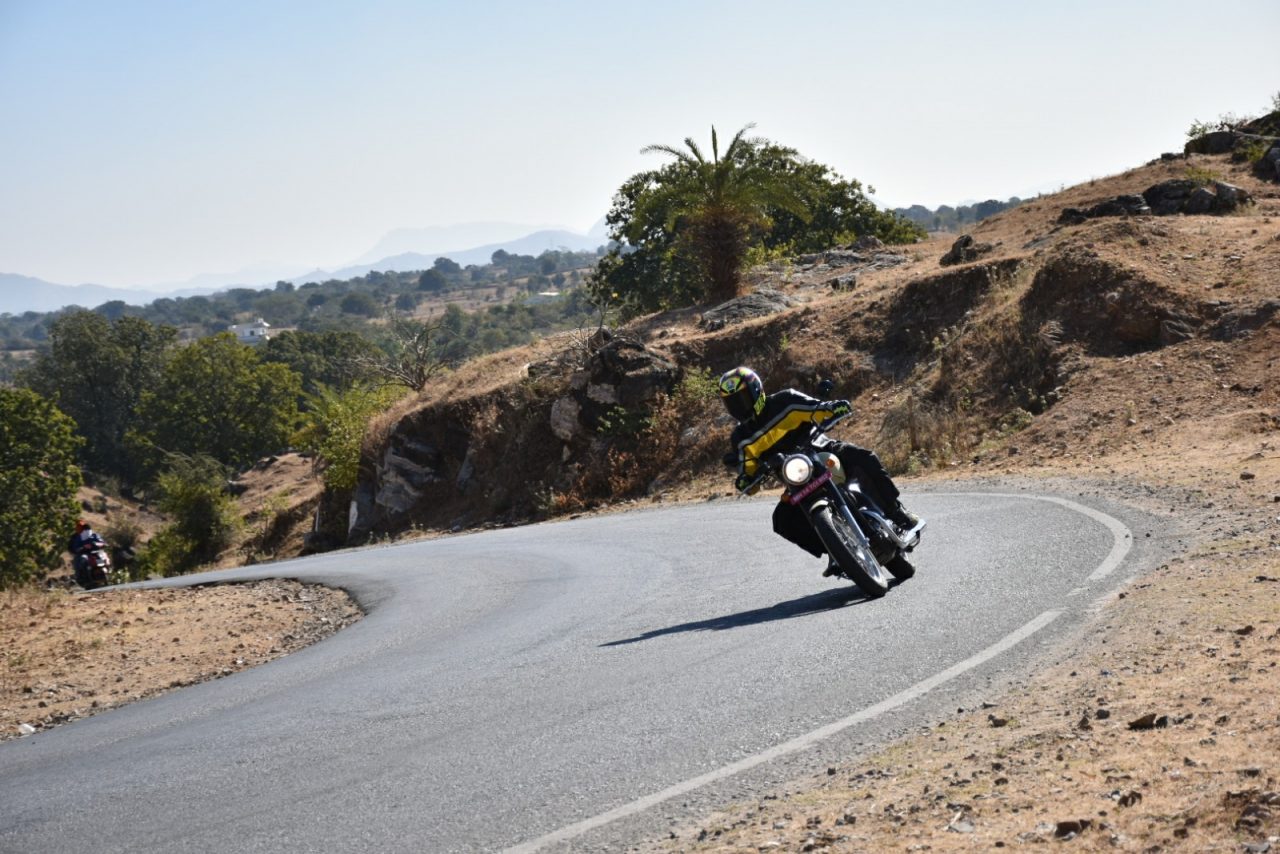 Stability at high speeds and in corners was good, too, though the front ends on both bikes don’t offer much feedback, instead asking you to simply trust them and go for it. On one occasion, the front of the Forty-Two did wash out momentarily into a downhill left-hander, but it was probably because I overshot the entry and hauled on the brakes. Whatever the case, I did come away with the feeling that you need to be sure of what you’re doing on this motorcycle/s and make no sudden corrections. Like I said earlier, these aren’t race replicas. 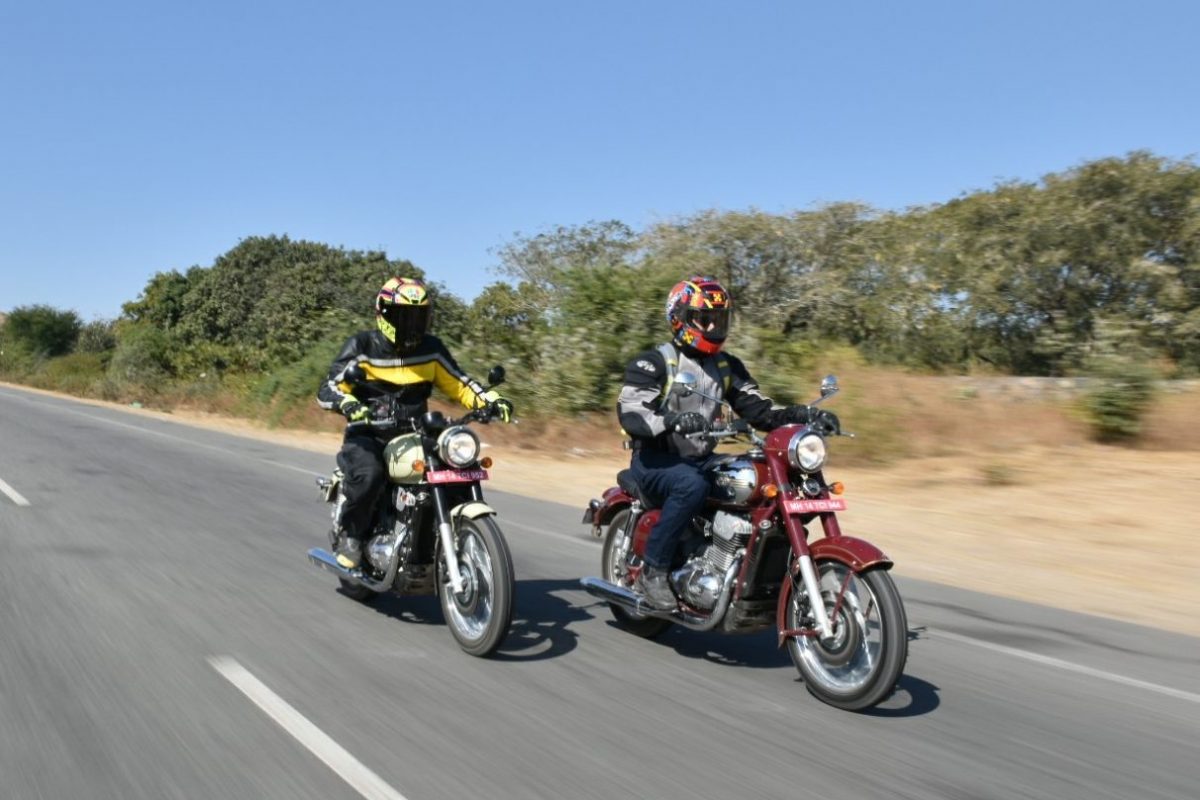 However, ride them not to conquer roads but to be a part of the surroundings, and you appreciate what these bikes are built for. Both the Jawas feel capable and curious about the world. Yes, they aren’t perfect, but they have enough character to make you disregard their minor shortcomings. And that’s the way it goes with motorcycles that chase your heart rather than outright numbers. They get under your skin and you don’t even know it. And hey, no scars this time around! 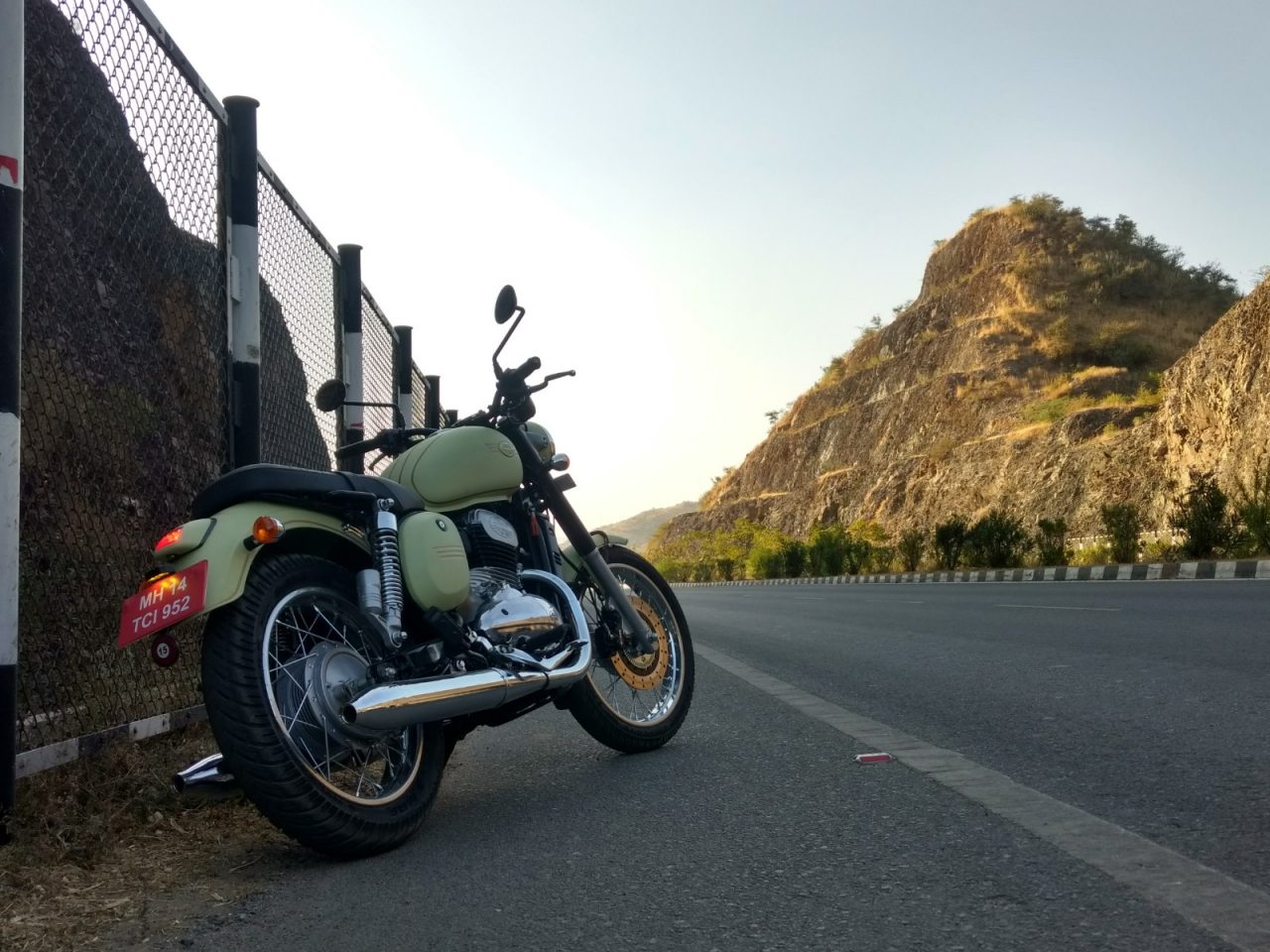