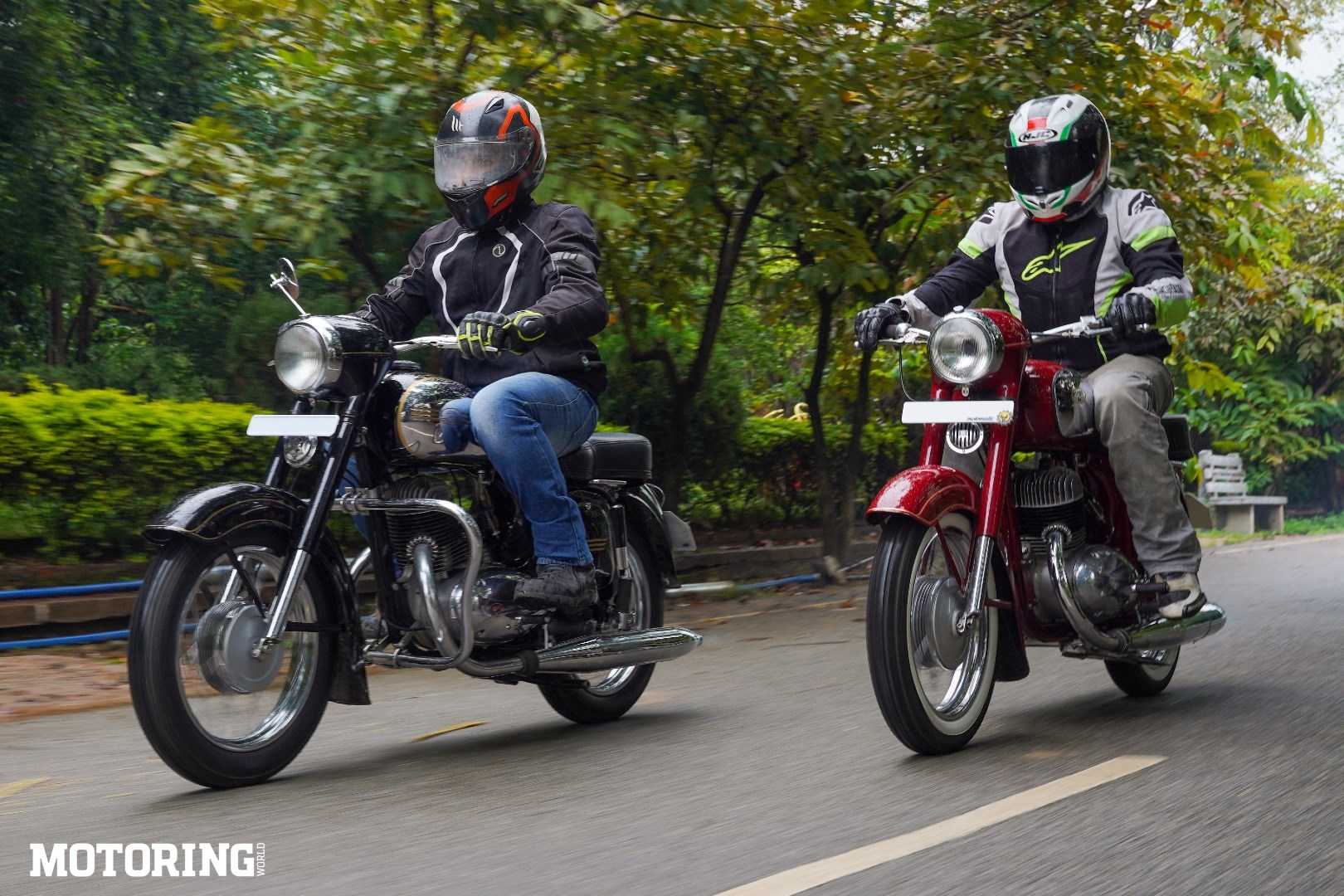 There are two things I realised while writing this story. The first was that motorcycles are excellent teachers, and old ones are especially good at teaching you about history. Every time you dig deep into the past of a machine’s origin, you’ll discover a trove of information that stays longer in your mind than anything you learned at school. The second thing was that old motorcycles teach you about patience. In today’s world, humans beings are evolving to a state where we almost want to get ahead of time itself. Life has become so fast-paced that we’ve forgotten what it’s like to live in the slow lane. 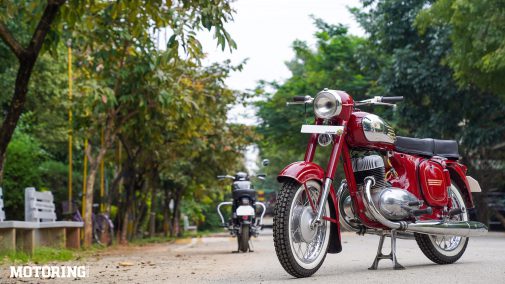 In the case of siblings such as these bikes, their DNA might be similar, but it can never be identical. This is why the two motorcycles here belong to the same gene pool, but have undergone a restructuring that has led to both having completely different character traits.

Back in the day, when Jawas were sold in India, the brand was known for its reliability, engineering, ease of maintenance, economy and ruggedness. The Royal Enfield Bullet was the only other motorcycle of any note on the streets back then. The Jawas offered something that the Bullet lacked — the fun factor. The Jawa was the performance bike of India in its day, and was the preferred choice of many young bikers. That said, the first one here is a Jawa 250 Typ 353, which sold briskly, with its ‘ding’ engine note soon to be heard across the nation. The second one is a Jawa 350 Typ 360, rare and limited in number since it was an import from Jawa’s home in Czechoslovakia.

Jawa as a brand has its roots deeply sown in competing at trials events. Given its focus on off-roading, the bikes that rolled off the production line were built to last and could be ridden on B-roads (or sometimes no roads) without any complaints. In the design aspect, any chassis that wore the Jawa badge was formed for square-section pipes instead of round ones, simply because it would take all the bashing the bikes would undergo during competition. Jawa proved this by being the winner at the International Six Days Trial, the oldest off-road event in the FIM calendar. Furthermore, if you look at both the bikes closely, you notice that they share a lot of cycle parts. After WWII, the entire world was striving to get back on its feet and start afresh. Jawa, being an East European company, was severely hit by the casualties of war, and to keep costs in check, the concept of one platform/chassis with different engine configurations was implemented.

A majority of the cycle parts on the two motorcycles here are thus the same, such as the telescopic front fork, twin-shock absorber at the rear, brakes, wheels and other components. This benefited owners, who could maintain their motorcycles without having to shell out too much. The most prominent and obvious difference between the two bikes is in the powertrain department. The 250 features a single-cylinder motor that puts out around 13 bhp. The 350, on the other hand, was formed by joining two 175cc engine blocks. The right block was mirrored for the left, to make enough clearance for the left-hand side exhaust pipe. Together, the motor had a combined displacement of 343cc, with a power output of 18 bhp. Both engines were mated to a 4-speed gearbox, and the kick starter on the left, in characteristic Jawa fashion, was also the shifter. 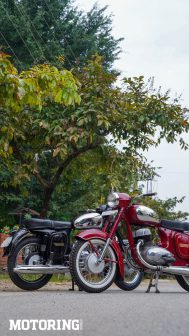 The 250 was one of the smoothest Jawas that I have ridden to date. Being restored from the ground up, every component has been carefully worked on, ensuring the bike’s originality has been maintained. The motorcycle rides on 16-inch wheels shod with block-pattern tyres. On the go, with the throttle opened to 50 per cent, I found myself shifting to the top cog in no time. Despite the gloomy weather with spells of rain, the engine ran smoothly, without any complaints at all. While the Jawa 250 is rated by the company to achieve a pinnacle velocity of 115 kph, I got to about 60 kph and stayed there for quite some time before I ran out of road. Had I twisted the throttle further, I am sure it would have easily breached the 100-kph mark without any trouble. 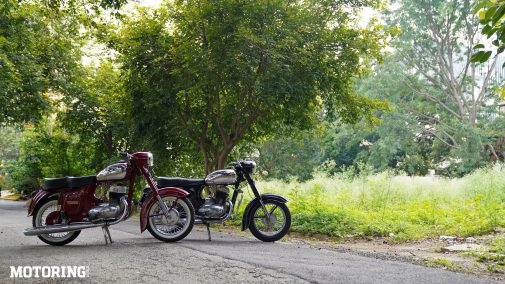 Up next was the 350. Here, the engine note goes from the typical ‘ding’ to something that can be closely associated with that of an RD350. Once fired up, the rhythm of the two cylinders in 180-degree action is music to the ears, to use a cliche. A quick blip of the throttle and the engine jumped up in excitement with the revs. This one, too, has been carefully and tastefully restored to its former glory, gleaming in bright red and chrome highlights, complete with whitewall tyres. I slotted the bike in first gear, and with a little slip to the clutch, I was having my first go on a 350cc twin Jawa. 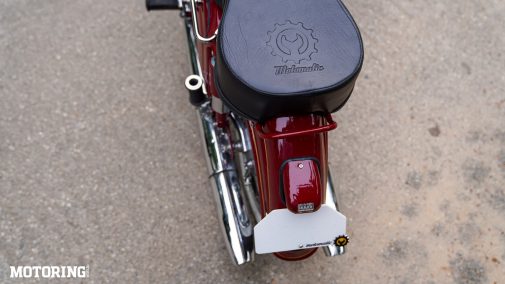 The experience was so fun-filled that I just didn’t feel like stopping. The effortless rush of acceleration from the time you open the throttle comes with a feel-good vibe that makes the ride all the more enjoyable. The 350 isn’t meant for outright speed, but it does have enough oomph to make your eyes widen with a good twist of the right wrist. I didn’t look at the instrumentation to see what speed I was doing, but I am sure it was in the ballpark of 75-80 kph; it felt more than that to the soul. 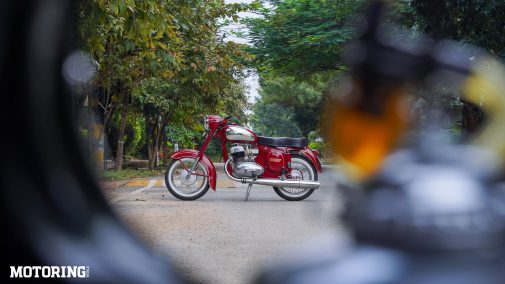 I rode both bikes back-to-back till the point the sky became heavy with dark clouds. These bikes were someone else’s pride and glory, which is why it made sense to quickly have them parked back inside, safe from the rain.

The Jawa 250 Typ 353 and the 350 Typ 360 were some of the finest examples that Jawa used to offer its buyers. In comparison to the other motorcycles that were available back then, very few offer the kind of charm and character that these exude. The clickety-clack sound of the mechanicals, the irresistible scent of 2T smoke combined with the smell of hot oil and the elegant styling — they all combine to make for a truly heart-warming experience. No matter what your actual destination might be, riding either of these Jawas takes you to a happy place every single time.

If you’d like to get your motorcycle restored, get in touch with Karan Lokhande at Motomatic R&D on Instagram. And let us know after it’s done!