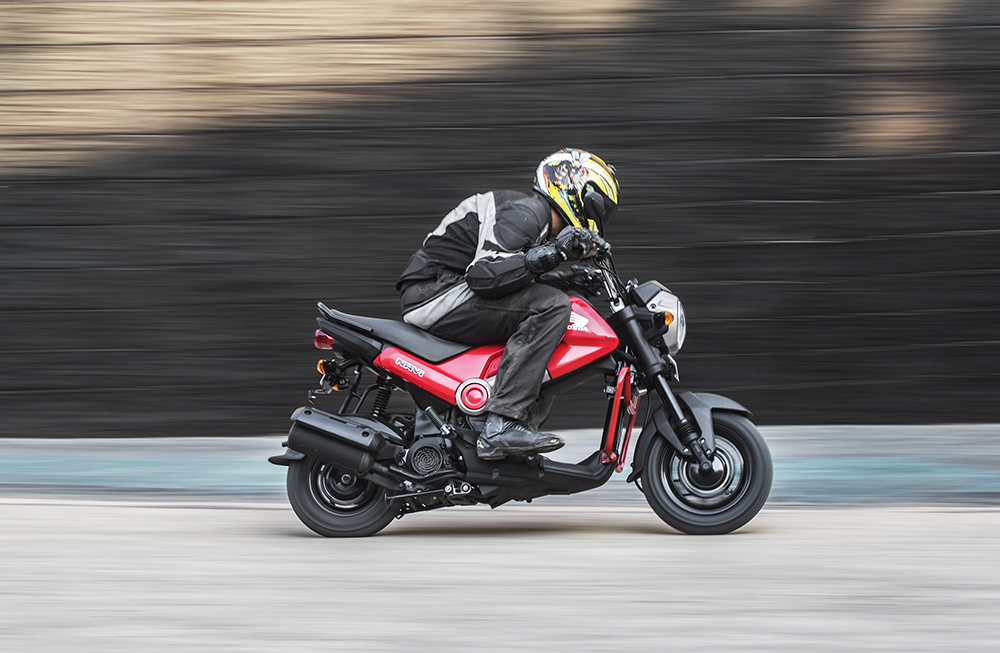 Growing up with my cousin Rahul wasn’t a lot of fun. This was mainly because he was everything I wasn’t – clever, extremely passionate about cricket and with an enviable collection of gadgets. If he broke something in the household during playtime, I’d get blamed for it and he’d utilise the time I spent getting roughed up or being grounded, on his Nintendo or by taking off on his TVS Scooty. In the years that followed, I learned to ride a geared motorcycle – he never did – and life was never the same again. I became the bully, the envied and the astronomically cooler of the two of us.

All those years of carefully building up the rugged, care-a-damn image have now come to naught, thanks to this, the Honda Navi. It’s a motorcycle that isn’t one, for people who find using a clutch and a gearbox too cumbersome (Ha! Bet a Nintendo couldn’t have taught you that!), but it’s not exactly a scooter, either. You can’t really call it a step-thru since it has a proper (howsoever small) fuel tank on the spine of its chassis and that leaves defining its class of vehicle purely to your imagination. I’ll call it a motoscooter for now because Honda already uses that term to describe the Dio and also because it’ll stop my cousin from claiming he can ride a motorcycle. Sorry about sounding all grown up, bro!

WHY NOT AN ACTIVA?

Good question. Assuming what you really need is an urban runabout, any present-day variomatic scooter is good enough for the job. They can all seat two, have floorboards for your veggies and a little ‘boot’ for your helmet, provided you first saw it into half. None of these scooters, however, are cool. Some of them are cooler than the others, but proper cheeky cool? None. The Navi is different. It’s covered in a layer of all shapes and sizes of plastic, looks like a modern-day Rajdoot GTS 175 and while it imitates a motorcycle in its layout, it is, give or take a few underpinnings, a Honda Activa. And yet, visually alone, it is everything the Activa isn’t – fun-looking and simplistic yet very contemporary. It’s like a knock-knock joke on two wheels.

…AND THE DREAM NEO?

Basic, bare bones and to the point, the Dream Neo is the textbook 110 cc commuter. The Navi isn’t, but it does just about everything the Neo does. How? Mounted over that puny 10-inch rear wheel of the Navi is a 109.1cc motor (borrowed from the Activa, what else?!) that produces 7.8 bhp at 7000 rpm, but since the Navi makes do without much bodywork, it weighs just 101 kg. That makes it impressively quick on its feet, enough to get you out of all sorts of trouble – just like my cousin. At urban operating speeds, that’s to say everything under 60 kph, it has more than enough grunt to keep pace with traffic, dare I say, better than even the Activa itself! Even beyond 60 kph and until about 85 kph, it’s absolutely at home with only the motor getting a bit vocal at top speed – all of this without changing gears! Do you really still want a boring commuter motorcycle?

ISN’T IT TOO SMALL?

No, you’ve been tricked. Sure, the Navi does look tiny but dimensionally, it is the same as – sorry to bring it up yet again – the Activa. It is, in fact, taller and longer than Honda’s bestseller and the seat height, at 765 mm, is the same, too. The only prominent difference, understandably so, is in the Navi’s overall (and seat) width. It’s also the latter that makes riding with a pillion rather intimate – something I did not fancy in the company of our competent resident photographer. However, even with Kartik breathing down the back of my neck (I never wanted to say that in this lifetime), the Navi felt peppy and stable, with only the suspension being more prone to bottoming out over bumps I didn’t see because I was distracted.

MUST BE SCARY AROUND CORNERS, NO?

You got that one wrong, too! The Navi actually feels more stable and offers more control than a conventional scooter thanks to its layout and ergonomics. Firstly, it has a 12-inch front wheel, which is an important safety feature since the Navi already feels too nimble. The larger wheel calms its agility down a bit and also makes it a lot more stable over long, sweeping curves. Secondly, because of the riding geometry, you can use your feet to weigh down the ‘pegs’ rather than let them float ahead aimlessly on the floorboard. Another good incorporation to the Navi’s underbone chassis is the conventional telescopic fork (although it looks like a USD fork because of its proportions) which lends helps not only the ride quality but also braking, which happens through a 130-mm drum at either end. That said, there’s no denying that the Navi is extremely flickable and, as a result of this, very enjoyable!

There is none. The Navi is as practical as urban runabouts can get and there are only a couple of niggles, all owing to keeping its costs down. Firstly, the meter console looks very dated as compared to the rest of the design and it doesn’t come with a fuel gauge either, which is bothersome since it only has a 3.8-litre fuel tank. While Honda justifies this by citing fuel-filling patterns being money-oriented rather than litre-oriented in the country, I doubt it would have added significantly to its price tag. Next is the lack of an ignition slot-mounted handlebar lock (it goes on the front-end of the chassis instead), which is an inconvenience, especially in the dark. Neither of these issues is major enough, to be honest, but to have them in place would have been nice, no?

Why not? The Navi is very much a conventional commuter, but just in a much cooler format. It’s like replacing your dull formal shoes for a pair of red canvas ones. It does everything you need a commuter to do, just not in the same age-old boring way. It’s fun to ride and not to forget, with Honda offering a load of add-ons (from some bare metal bits to supermoto-style bodywork and even an adventure-touring version!) you’ll never get bored of it. The Navi, then, is practical, stylish and a little bit gimmicky, but it’s a fantastic way to liven up your chaotic commute. At Rs 42,824 (ex-showroom, Mumbai), it’s more affordable than a scooter and that includes the price of cool as well! Looks like my cousin is going to get back to being hateful again, then.