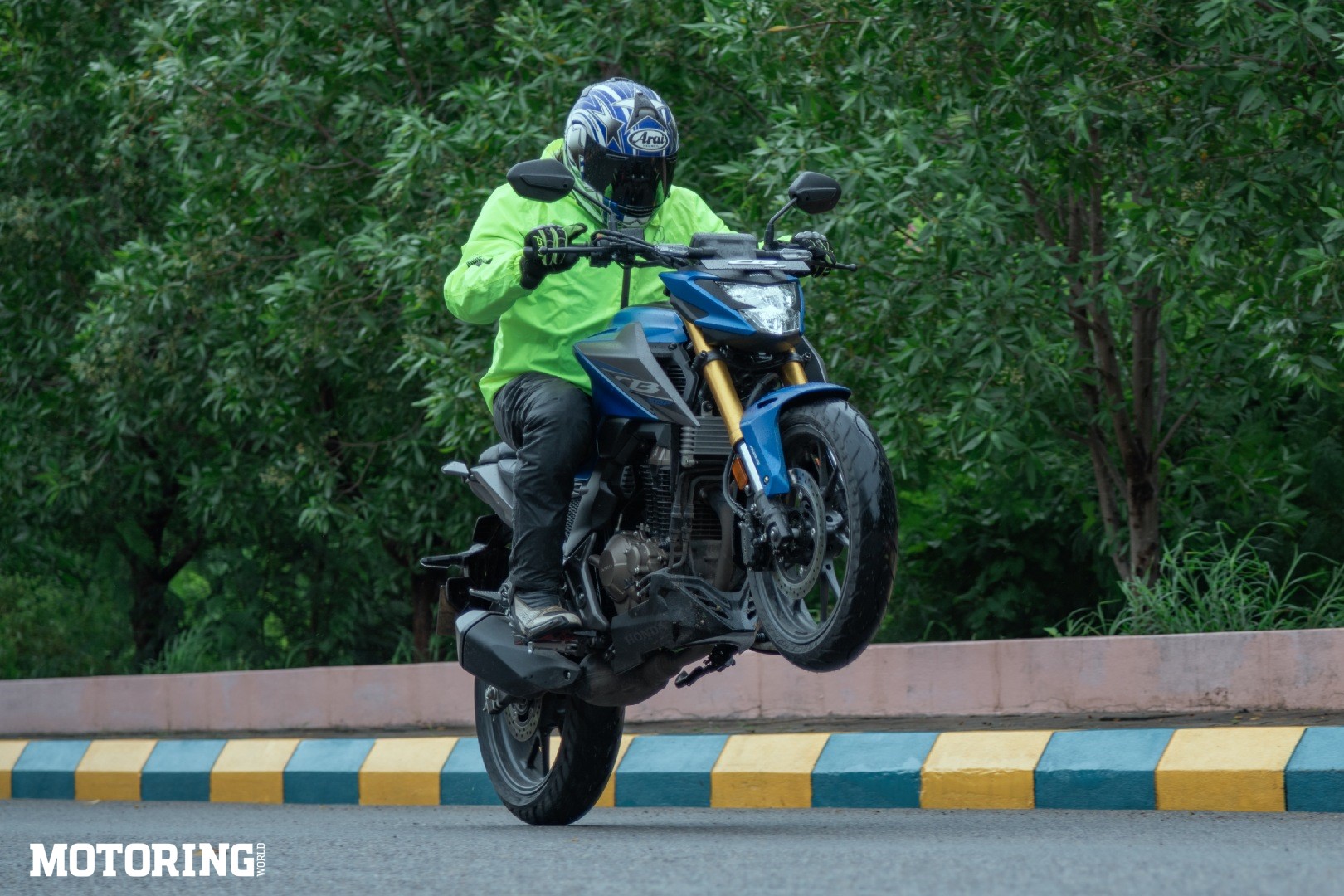 Making motorcycles is a tough business, and making good motorcycles is even more so. But at the same time, no motorcycle is a bad motorcycle. It is also the responsibility of the manufacturers to understand the need correctly, and develop a machine that slots itself in that targeted space and market in the most favourable manner. That said, Honda 2Wheeler India had been playing around by sending out teasers of a new machine, which fueled weeks of speculation on what it might be. While some thought it would be a powerful maxi-scooter, others were betting their money on a dual-purpose offering. It turned out to be neither of the two, as Honda felt there’s a growing market in the streetfighter segment in the international market, and hence, decided to bring in a derivative of it. To find out more about it, Honda had invited us to Ramoji Film City in Hyderabad to get our hands on an all-new bike. 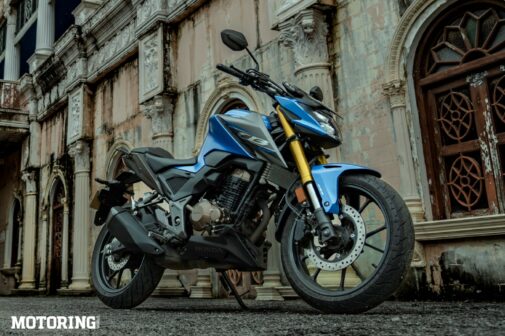 WAIT, WHAT’S THIS?
This is the CB300F. And if you were wondering if it’s based on the CB300R, or shares some of its underpinnings with the Hness CB350’s powertrain, you’d be wrong. Honda has built this motorcycle from the ground up — the chassis, powertrain, and other components are all-new. In terms of inspiration, the CB300F gets it from the internationally-sold CB500F, which holds a popular demand in the do-it-all naked street bike segment. Yes, it does remind one of the Hornet 2.0, but the similarity is because of the same design language used. Otherwise, both motorcycles are quite different from one another. 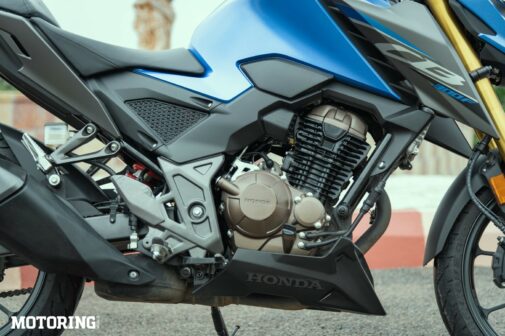 Unlike the CB300R, which gets a liquid-cooled motor, the CB300F features an air- and oil-cooled one with a slightly higher 293cc displacement. Honda India says the motor has been co-developed with the engineers at Honda Japan, and the bike has been rigorously tested on Indian roads. The all-new engine unit features a four-valve head with a single overhead cam, is rated to produce 23.8 bhp at 7500 rpm and 2.31 kgm of torque at 5500 rpm, and comes mated to a slick 6-speed gearbox. While the numbers aren’t that appealing, Honda seems to have taken a conservative approach here, again. 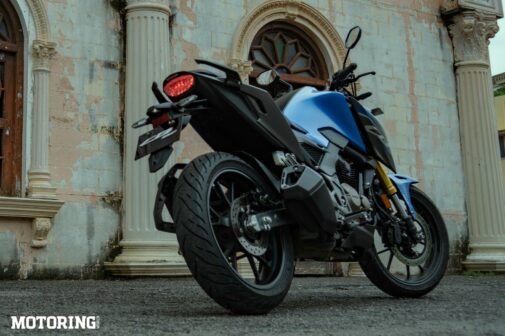 But, it isn’t quite the case in the looks department. The motorcycle is nothing but edgy, with sculpted lines running all along the motorcycle’s length. The aggressive tank extensions along with the gold USDs and full-LED headlamp, give the CB300F a formidable stance that’s quite appealing. Other interesting bits include the belly pan below the engine, split-seat, and the stubby exhaust muffler. 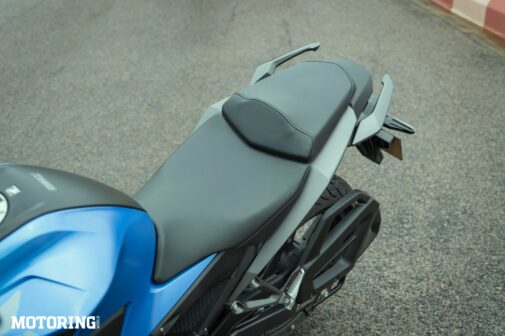 Despite the aggressive streetfighter looks, the CB300F is rather a relaxed and comfortable motorcycle in terms of riding ergonomics. It’s an upright, naked motorcycle designed to ape the other CBs, with a strong focus on practicality, and everyday usability. 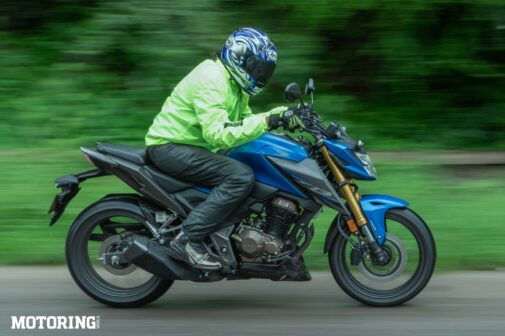 CAN I RIDE IT TO WORK?
Yes, without a worry. The CB300F is a very comfortable, large-ish motorcycle that’s in no way cramped or unmanageable. Fans of naked street bikes will appreciate the upright riding stance, and from the conventional handlebar to the slightly rear-set footpegs, it feels just right. Even the split-seat design is spacious and accommodating, with the correct amount of cushioning for a comfortable long journey. The pillion seat, too, is just about comfortable enough, and is very easy to get mounted on. 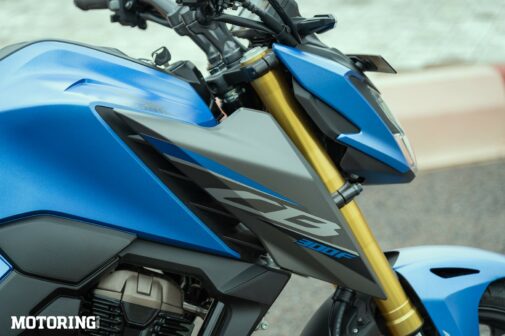 On the suspension front, the CB300F gets an upside-down fork and a monoshock at the rear, both of which offer an exceptionally pliant ride, which is, thankfully, not so soft as to take away from its agility. If you are upscaling from the 150cc class motorcycle, you will definitely admire the CB300F, as it seems very much like an upgrade in terms of feel and quality. 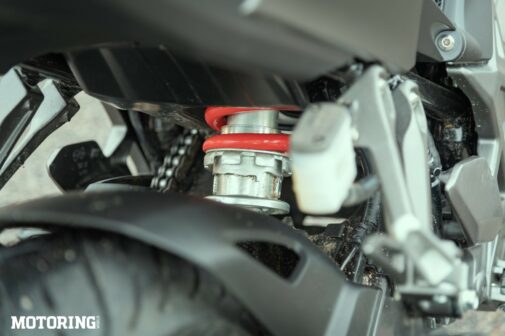 AND ON THE RACETRACK?
I wasn’t looking to have this box ticked, and it does feel like the CB300F is not the best tool for riding all-out. The bike is built around a split-twin downtube frame that’s designed mainly for in-city riding. On straights and smooth flowing corners, the CB300F feels like a hot knife through butter, one that is capable of carving its way through traffic. The suspension setup further compliments it by keeping out the rough stuff. 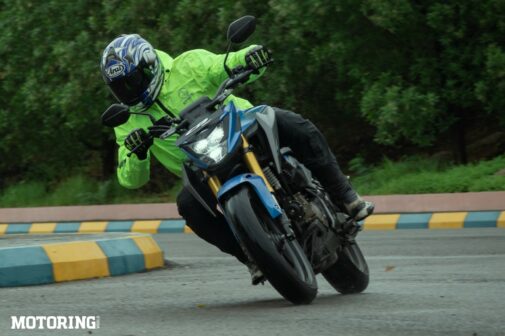 The CB300F packs a disc brake at either end which, paired with this sort of suspension, digs in its anchors admirably. Although, I should mention that the front disc could have been done with more feel at the lever. Next are the MRF Zapper tyres that offer decent levels of grip, and significant levels of confidence, even in wet road conditions. However, the dynamics of the motorcycle feel challenged when pushed hard. When I tipped the bike into a moderately sharp corner, I could feel a slight flex in the chassis that made me want to roll off the throttle, and sit back up on the bike to keep things limited to the two contact patches. 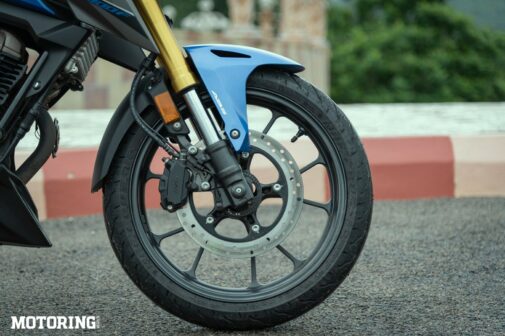 Apart from that, coming to the CB300F’s motor, there was a bit of a roughness felt, especially after accelerating beyond the 6000-rpm mark. There is a buzz from the motor that creeps in, which can be felt at the handlebars, pegs, and the seat. While it is not very intrusive, it does occupy mental space, mainly because Honda’s have always been known for their refinement. 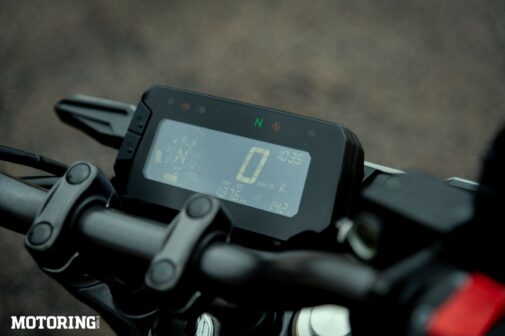 Also, a good chunk of the torque produced is at the lower-end of the rev band, and the compression ratio is more relaxed, which hints at a more commuter-ish performance, which it is. Power comes in a linear fashion, with no moments that will catch you by surprise. The good bit of this setup, then? When it comes to tractability, the CB300F is really good. Slot the bike in the fourth or fifth, or even the sixth gear, and one can ride around town effortlessly. Overall, in terms of fun factor, the powertrain and the dynamics aren’t the best suited for spirited riding as marketed by the brand. 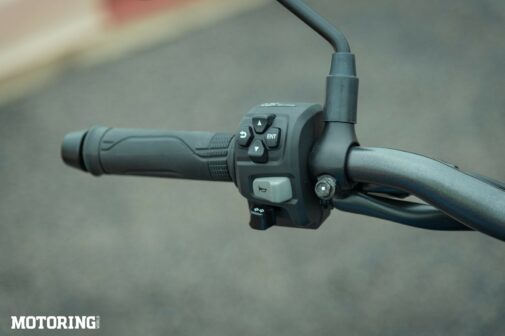 WHAT ABOUT WEEKENDS, THEN?
Remember the CB Unicorn 160? Now imagine that with about 10 bhp more, and some weight to lug around — that’s what the CB300F feels like on open roads, and my apologies for having made you wait for so long to get to this. The CB300F’s motor isn’t the most refined, but does feel meaty under acceleration. Its design will probably go against making it look the quickest of the lot, but that doesn’t make it entirely slow. In terms of top speed that I could manage considering the roads, I managed to breach the 100-kph mark, and clocked 108 kph before lifting off the throttle for a corner that was coming up. 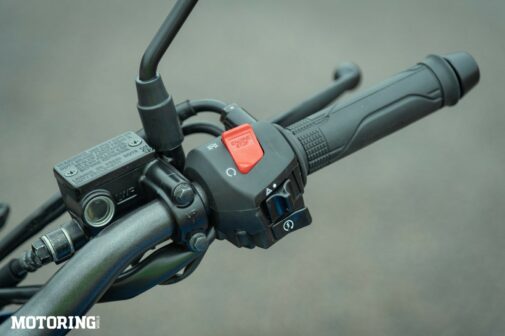 What makes riding the CB300F quite enjoyable is that it feels subtly agile and composed, rather than frantic and aggressive, which is great if you’re not a fan of the latter. It’s not the most rev-happy bike, but the gearing is spot on for the average fun factor that is probably enough for everyday riding as much as for weekend getaways. 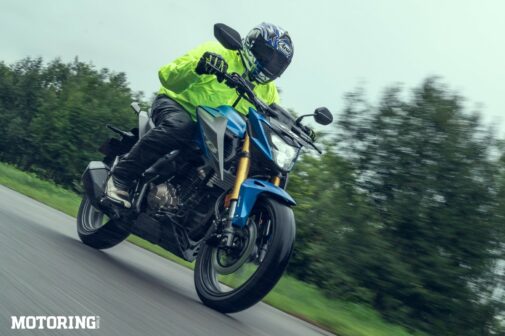 SOUNDS GOOD, BUT…
I know what you’re thinking — the competition and the asking price, right? Honda is asking for two lakh, and a little over it, for the CB300F, which in my opinion feels quite overpriced for the kind of performance and equipment offered. And it feels so all the more when comparing it with rivals in the segment. For a slightly larger budget, one has the BMW G 310 R, which is a fantastic street bike in all possible aspects. And even if budget is a concern, for around the same price as the Honda, there are motorcycles like the Suzuki Gixxer 250 and the KTM 200 Duke, which offer a better ride experience, and value overall.

Now, although I’ll leave the specifics of the comparison story for later, the CB300F feels like a missed opportunity for Honda in the 300cc segment. Instead of a high-class commuter, it would have been nicer to see an adventure-focused motorcycle, partly based on the CB series, or if playing it safe was the criteria, yet another variant of the H’ness CB350 in the form of a roadster. That said, I hope Honda 2Wheeler will be less conservative, think beyond the commuter mindset, and come up with motorcycles in the future that are as fun and fast to ride as their names and looks.