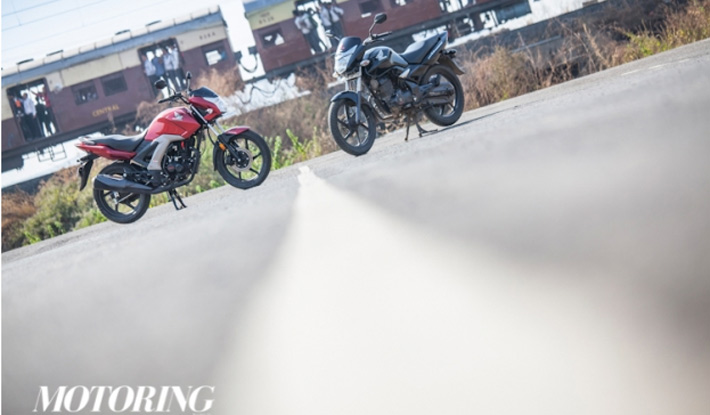 Whoever said, ‘Never look a gift horse in the mouth,’ must’ve been referring to the Honda Unicorn. That could very well have been the product brief for the motorcycle, for all I know. It was Honda’s first bike in India, and year after year since it first reared its plain Jane head in 2005, it’s soldiered on without a complaint, being flogged from one paint-job upgrade to another. Until now, that is. As it enters its tenth year in India, it gets a new stablemate, the CB Unicorn 160. That’s right, a Unicorn with a bigger horn. Not that you can tell that at first glance, though.

Honda aims to position this new Unicorn between the old one and the CB Trigger. I admit I’m no marketing/branding/other-inane-branch-of-humanity expert, but how can a mid-level motorcycle be more powerful than a perceived flagship? Or does Honda expect the Trigger to quietly fade away? Anyway, it’s a good thing the CB Unicorn 160 rises above all the brochure-talk to prove itself as a competent motorcycle.

As is universal knowledge, Honda is not in the business of offending folks with its motorcycles. Or setting aesthetic examples for others to follow, for that matter. The old Unicorn is designed to establish an inoffensive harmony with the maximum number of eyeballs that fall on it. And the new one is a more rakish example of that school of thought.

The old Unicorn’s handsome-but-staid lines looked fresh for about five minutes after it was launched. The addition of alloy wheels and all-black cycle parts made it more attractive, sure, but that lasted for just a few seconds, too. I expect a similar attention-getting trajectory for the CB Unicorn 160. It’s not trying to make anyone drool all over it. It’s the kind of bike you can take home to your parents without any fears of disapproval.

The H-shaped tail-light is my favourite part of the motorcycle. It’s meant to symbolise Honda’s recently launched ‘Honda is Honda’ campaign in India. Like anyone’s ever going to say ‘Honda is Suzuki’, ‘Honda is Yamaha’ or the winged badge’s worst fear, ‘Honda is Hero’. Everything else is taken from the ‘How To Design A 150cc Bike For India’ textbook. You can still see hints of the old Unicorn’s silhouette in the new bike every now and then, but mostly you’ll be trying to figure out if you like it or not. Until you ride it, that is.

There’s no escaping the fact that despite having no exceptional cycle gear, the old Unicorn is an extremely sorted motorcycle. It does whatever is asked of it with the composure of a Zen monk. I still haven’t figured out how Honda’s managed to do this. And you know what? The new one is even better. And it’s a lot of fun, too.

The moment you sit on the bike, your feet reach out for the ‘pegs a few inches behind their actual position. Don’t know why, but almost everyone who’s ridden the bike says that the footpegs are off by a mile and then some. I won’t go so far as to say that it detracts from the riding experience, but it certainly is an irritant. I don’t remember too many people complaining similarly on the older bike. And to be fair, the new bike quells all complaints the moment you dump the clutch for the first time.

Everyone who’s ridden the CB Unicorn is in unanimous agreement about two things — the footpegs are stupid, yes, but more importantly, it’s a wheelie hooligan par excellence. If the old bike is a great wheelie-bike, the new one is even better. It’s stupidly easy to hoist the front wheel and keep it there for as long as you can. It’s easily the best 150 for the aerially inclined among us, and if wheelies are all that matter to you, stop reading right now, break the piggy bank and make a dash for the nearest Honda showroom.

For those who are still reading, I’m having trouble seeing the new Unicorn as anything but a wheelie-machine. It’s come to a point where its excellent handling and great ride quality don’t even matter. But I’ll distract myself just enough to tell you that the CB Unicorn 160 is a great urban-transportation tool. The turning radius is ridiculous — any more and you’d find yourself face-to-face with the headlight. This, as you can guess, is extremely handy in traffic. And the bike is beautifully balanced, so you can pull off all the moves you want brimming with confidence. And yes, the handling is backed up by a great motor, too.

Besides being more powerful, the CB Unicorn’s motor is a step up in refinement, too. Did you ever think that was possible? Well, the new counterbalancer in the motor says it is. Power comes in one long, happy surge all the way to the redline on the digital meter. Sure, it doesn’t feel as fast as the Gixxer at the top end, but it’s fast enough. Besides, I’m sure the overall gearing is on the shorter side of things, given how it wheelies and whirs around town in top gear at 30 kph without complaining.

Another thing worth mentioning is the optional Combined Braking System. It works by partially applying the front brake when the rear brake is used. I’m not entirely convinced about this, since it’s a bit strange when the front suspension dives a bit even when you use just the rear brake. Just a matter of getting used to, I’m sure, if you decide to go for this option. I prefer it when each wheel is left to its own devices, though.

That said, one thing the CB Unicorn 160 needs is better quality rubber. With the bike’s enthusiastic and able nature, it’s not long before you start to push hard and then you realise that the tyres aren’t really up for it closer to the limit. There is always a bit of uncertainty at full lean, though the chassis and suspension communicates all goings-on quite effectively. This bike can certainly benefit from the confidence of better shoes to kick corners’ backsides with. (Hey, I hope the wheelie guys reached their respective Honda showrooms okay…)

Yes, the CB Unicorn 160 isn’t the Suzuki Gixxer/Yamaha FZ rival we were all expecting. And yes, this bike deserves more style and attitude. However, despite these opinions, the bike immediately stands out as one of the best air-cooled 150s (okay, it’s a 160) in India. It’s a great commuter and the best-value wheelie-bike in India, for sure. Now to figure out how to get those footpegs sorted…