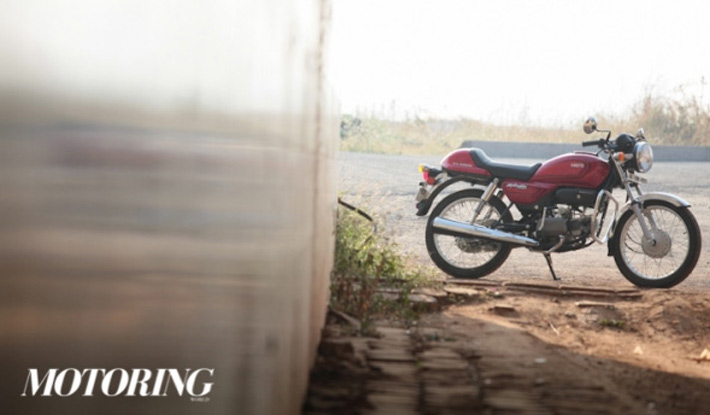 My head shakes in disbelief, a gesture replicated by your head too, I’m sure. The largest-selling motorcycle in the world is now a café racer. Who would’ve thought in 1984, when the CD 100 won the hearts and wallets of Indians, that one of its descendants (reincarnations?) would be a café racer? Well, I did think of that once, and almost bought a CD 100, too, but better sense prevailed and I bought a two-stroke Yamaha RX135 instead. Phew. But here’s my misguided ambition come to life before my very eyes as the Splendor Pro Classic. So is this cup hot or cold? Well, it’s hot to begin with.

I am convinced beyond all doubt – tracing the outline of a café racer to any motorcycle makes it look good. Two of my own bikes find themselves turned into coffee machines, so there must be something to it, at least when it comes to me. And the Splendor Pro Classic does a good job of impressing people, too. It attracts way more attention than a 100cc commuter should. Every single individual you come across everywhere you go moves in for a closer look at the bike.

The bike does look old-school handsome, but the ‘old school’ part is no surprise – it is, after all, an old motorcycle, in essence. You’ve got round lights all around, an ‘Ace style’ handlebar, a period-looking seat unit complete with a gentle bum-stop, spoked wheels with drum brakes and chromed mudguards – that sounds right out of a 1960s’ motorcycle catalogue, doesn’t it? And it’s glad to see how these simple design elements make for timeless beauty, a beauty that still attracts people who don’t know the first thing about café racers. That said, the seat and tail are the only two things that I find people staring at. Everyone admires it from every angle, and then goes, ‘ What, only for one person?’ For the last time, yes! And it’s not a sin!

A motorcycle should be ridden alone, in my opinion. Perhaps it might just get fellow Indians used to the idea that a motorcycle can be a single seater as opposed to the people-carrier it usually is. However, depriving people of carrying dead weight around might drive more than a few prospective buyers towards the pillion-ated versions of the Splendor. Perhaps Hero could make a two-seater version just by adding the pillion footpeg subframe to the bike and seeing which pillion is brave enough to get on? That’d ruin the clean lines of the rear and dilute the purpose of the bike, but… Hero’s already kind of done the latter itself.

A café racer, typically, is a minimalistic motorcycle stripped of its frills and with a keen focus on handling and power. It also does not have the footpegs of a commuter. The Splendor Pro Classic is a classic case of noble intentions, but lukewarm results. The ‘no frills’ bit is a given on this bike – only electric start and a side-stand-down indicator. There’s a feel-good moment when you swing a leg over that shapely seat, reach down to the ‘bars and feel next to no weight between your legs.

That lasts exactly until the moment your foot futilely reaches for the ‘peg somewhere near the rear shock absorbers, the insult to which is added the injury of placing your feet in the standard commuter position. For a six-foot guy like me, it’s far from comfortable. I move up and down that seat, but can’t find a sweet spot to perch on. Plus Hero’s persisted with the heel-and-toe gearshift lever, which makes ergonomic matters worse. I’ll say this once: a café racer needs rear-set footpegs. And toe-shifter only. Please.

Moving on, I really can’t say anything about the 97.2cc air-cooled ‘sloper’ single that you and your family’s last and next generation doesn’t already know. It’s been around for a long time, and I’m sure even it is bewildered by the fact that someone built a café racer around it. It makes 8.25 bhp@8000 rpm and 0.82 kgm@5000 rpm, both quantities delivered in a smooth manner that’s never wet any pants nor ever will.

Suffice it to say, if you’re planning a race between cafés timed to songs on the jukebox, make sure it’s a really, really long song, preferably an entire album. And then play it on loop a few times. Anything past 60 kph is asking too much of the little motor. It is, after all, more about ‘kpl’ than ‘kph’. In first gear, as many Indians have found our over the years, this motor wheelies with surprising ease. However, you also have a hard time outrunning all the dogs that your rev-and-dump-clutch attracted. And after all these years, even they know where to find your ankles on a Splendor. Another case for rear-sets, then.

The motor’s fine for running along in the city, and that’s quite alright – cafe racers are not really about outright power, in any case. It’s handling that we need to zoom – in this case, potter – around traffic between a hot cup and a cold one. The Splendor Pro Classic handles just fine, its light weight and tiny dimensions quite at home squeezing through any gaps you can find. The tyres, though, feel like they will last decades – but at the cost of grip. They make it difficult to trust the bike, so you attack corners with a white flag firmly in hand.

And that period-looking front drum brake is a few years behind in performing its function, too (Even the ‘Brakes’ section of its spec sheet on Hero’s website is blank as I write this). You can throw it around, yes, but only at much lower speeds than café racers deem respectable. Doing the tonne? Well, you’ll do more than a few tonnes of miles on a full tank of petrol, if that counts. And that’s never a bad thing… unless people start expecting café racers to be fuel-efficient motorcycles. That’s what Hero does best, after all.

So why does Hero need to do this at all? Well, why not? And where else are you going to get a factory-made café racer (even if that is almost a dishonour to café racers, traditionally a homemade breed) for Rs 50,833 (ex-showroom, Mumbai)? If the Splendor Pro Classic gets the masses excited about this lovely type of motorcycle, and makes them wonder what a bigger shot of caffeinated excitement feels like, we just might more bikes like the ones we want.