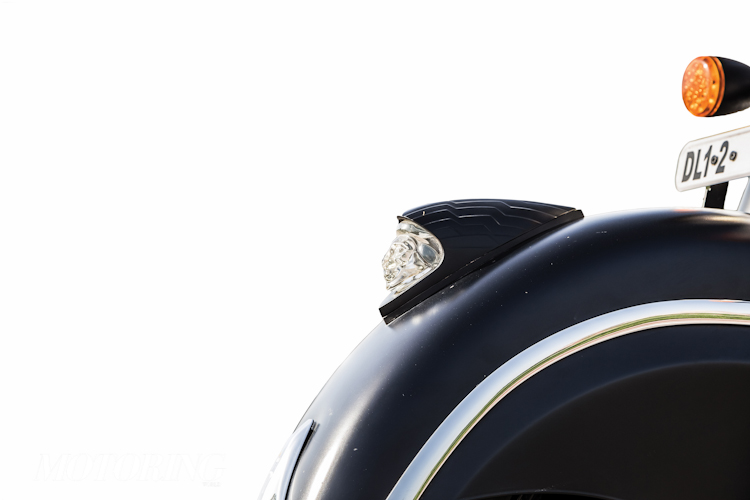 There was a quaint silence, broken only by the tour guide’s well-rehearsed monologue. The Japanese tourists huddled around him, pointing their compact Sonys (or is it Sonies?) towards various portions of India Gate. It was my first time here, too, but my mind couldn’t go past one pressing question — why is India Gate named like a scam? I mean, it’s not even grammatically correct. That, and the small matter of having parked in its shadow a motorcycle that says ‘Indian’ on its fuel tank. And it’s not even Indian. Weird, all this  naming business is.

I went into this road test with an ‘it’s only a paint job’ mindset, but the Indian Chief Dark Horse changed that quickly. Wow, it’s huge and — bigger wow — it’s one hell of a nice motorcycle. Okay, so it genuinely isn’t anything more than a paint job over the standard Chief Classic, but it’s a cosmetic makeover done just right. It’s a curvy, flowing sort of design which intimidates purely through its sheer expanse and, of course, the matte-black paint (Thunder Black Smoke, in the brochure) which is what gives it the Dark Horse title. Oh, and you can look long and hard, but you won’t actually find the words ‘Dark Horse’ written anywhere on this motorcycle. Weird. Plain weird.

Quite honestly, though, they could have called it just about anything (…short of White Bird, maybe) and it wouldn’t have made one bit of a difference. I can’t take hanging around for Harshit to finish his shots any longer and beg him to let me go for a spin. He gives me the go ahead. Kill switch disengaged, I thumb the starter and even before we settle into idling revs, I feel a sense of potency coming through the throttle twist grip. This being the first Indian I’m about to ride; I’ve no idea what to expect, so I let fate take its own course.

Good lord, this is a fast motorcycle! Not that this sort of behaviour is expected from a bike like this, but take it more as a warning than anything else. Even the mightiest of Harleys, V-Rod aside, don’t feel as quick, and while you may never feel the need to ride at triple-digit speeds, knowing you can is probably worth something. I slow down and shift up a few gears, nevertheless, only to be greeted by huge reserves of torque lending the Dark Horse, at the expense of using a cliché, locomotive linearity. Cruisers aren’t my favourite format of motorcycles, but there is a charm to riding on an empty road at low speeds with a big twin between your legs, arms wide open.

Peripheral vision paints a pretty picture, too, as I gaze momentarily at the tank-mounted analogue speedometer. The small digital readout within the pod keeps me informed of things such as the ambient temperature and battery voltage, but it is of no real relevance to what is turning out to be quite an enjoyable ride. Indians are beautiful motorcycles, there is no doubt about that, but even on a motorcycle with cosmetic appeal as its very premise there is hardly any attempt at flash. Everything feels good to the touch, built with a sense of exceptionally good quality. It could have skipped its makers, but it hasn’t — full marks  for that.

While this is a very large and very heavy motorcycle, as is the right way to describe something that weighs over 360 kg, it hardly makes a great deal of it in motion. The riding ergonomics are simply perfect, the vibes mostly kept away save for effect and if cruisers are meant to make really long rides feel effortless, the Dark Horse has my vote in that aspect. What’s more important to a motorcycle of this sort is presence and that, too, it delivers confidently. As traffic builds up steam along important intersections in the capital city, more and more heads turn in my direction. Questions are carelessly thrown around, but that’s something you just can’t escape in our country, right? There’s one from a curious gentleman in a Hyundai Santro: ‘Is it a Harley-Davidson?’ Sigh!

Fortunately, the Dark Horse’s 1811cc V-twin has more than enough grunt to pull away very quickly from unpleasant environments. And that’s exactly what I choose to do. We escape city limits briefly and as the ambient noise drops down drastically, I can hear the very core of the Dark Horse. It’s a slow, steady beat that’s not lethargic but not too busy either. With clear skies, an almost arrow-straight road ahead and time on my hands, I begin to really enjoy the Dark Horse for what it is — an old-school cruiser that’s simply beautiful. The functionality of cruisers is beyond me, I’ll confess, but if there is one thing that’s common to all the greatest cruisers, it’s an ability to soothe the nerves of the rider through its very pulse. That, the Dark Horse does in the most  enjoyable manner.

Should you consider buying one, if you’re in the market for this sort of motorcycle? I can’t think of one reason why you shouldn’t. Apart from factors such as exclusivity and style, all taken care of by Indian, what I like about the Dark Horse is that it’s a genuinely nice motorcycle to ride. And while I’m not the biggest fan of matte-black paint either, I think the Dark Horse looks great and it definitely won a lot of admirers of all genders and age groups, parked under the shadow of the India Gate. Which reminds me — maybe they should have named it the Gateway of India.  Oh, wait…