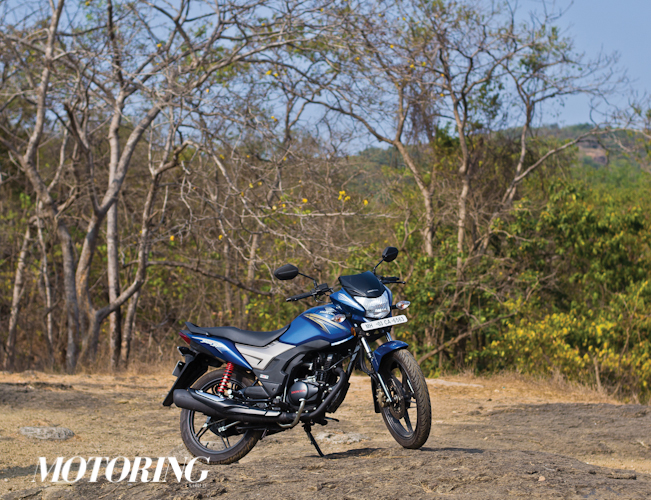 The Honda CB Shine SP is a very interesting 125cc commuter, because it loves getting up and giving its rider an unimpeded view of the sky. I’m joking, of course. That’s not why it’s interesting. It’s very interesting because it gets up and stays there for as long as you will it to.

Aside from the fact that it wheelies rather well, the CB Shine SP has more than its fair share of good points. The rather neutral design elements may make you fit in rather well in Switzerland, but over here it won’t get you a second look, that’s for sure. That’s not to say that it’s a bad design; it’s just not something that will stand out. The bike’s finished well, has a decent and functional meter layout that has analogue and digital elements, and the multi-spoke alloys look neat enough.

As for propulsion, the CB Shine SP gets a 125cc air-cooled, single cylinder engine that produces 10.4 bhp at 7500 rpm and 1 kgm at 5500 rpm. The power is transferred via a 5-speed gearbox that’s decently smooth for the most part, unless you start hammering it up and down like some sort of crazy commuter on our roads. Or, rather, just any commuter on our roads. Same thing.

Twist that throttle and the Shine SP gets off to a sprightly start. Progress right up to 80 kph is linear, after which you’ll be struggling to pile on the revs. The point is that in fifth gear, the Shine is more than happy to keep speeds of 60-80 kph, which is the purpose of a bike like this one. It’s a nice refined ride for the most part, with only large cracks in the road or big speedbreakers catching the bike out thanks to its less-than-generous MRF tyres. Speaking of which, the bike we tested also got Honda’s CBS (Combined Braking System), which works well enough, but I would have preferred just that little bit more of a bite from the  front disc.

The CB Shine SP does its job very well. Keep it in its element, and it’ll chug along effortlessly all day. It’s comfortable, refined, you can spec a disc at the front, and it wheelies really easily, too. Should you buy one? Absolutely. It’s a no-nonsense workhorse from Honda, and it will keep you happy for years to come. For the price (Rs 64,400 for the top-spec CBS variant tested here. Base and front disc variants cost  Rs 59,900 and Rs 62,400, respectively), it’s a very nice value buy. Just don’t overcook those wheelies.