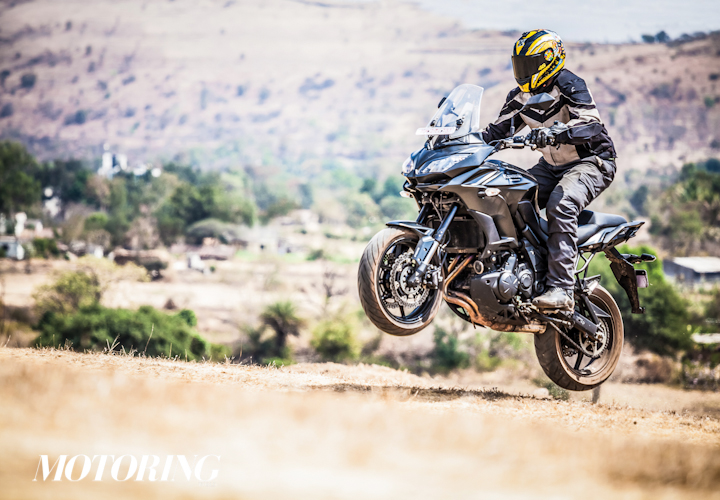 Scroll down to the end of this story. See that little ‘Motodata’ column there? I hate filling up that empty grid. It’s a metric necessity slapped on out of compulsion and quite an irritant, in my opinion. It’s like having Salma Hayek tattoo her vital statistics on her cheeks. And I really hate tattoos.

Sometimes, though, that specification box has a story to tell. The smallest of numbers, the slightest of variations in equipment can, at times, make a whole lot of difference to how a motorcycle behaves. It’s a deciding factor, in a sense, and it is motorcycles like the Kawasaki Versys 650 that justify the existence of that tell-all intrusion in these pages. If you thought the Versys 650 was just an ER-6n with an outdoor jacket on, you weren’t too off the mark. But that doesn’t paint the complete picture at all.

The Versys 650, you see, is a perfect case study on an increasingly dominant aspect of motorcycling — setup. I’d be lying if I told you I’d seen it coming for years, but the world over, setup is getting its due prominence over factors such as power, torque and electronics. Perhaps it’s because setup is the most analogue of all factors, the most direct, most communicative element in the riding sphere. A lot of it is ‘feel’ based and it cannot be camouflaged, even to the best of a manufacturer’s attempts, under a layer of electronic rider assists. Setup is raw and mechanical. And in the case of the Versys 650, it is just right.

You see, the Versys is actually down on power from the ER-6n, which I must refer to for the sake of perspective. While the 649cc parallel-twin motor is common to both, the Versys’ motor produces 68.3 bhp at 8500 rpm as opposed to 71 bhp from the latter. It is also 12 kg heavier than the ER, weighing in at 216 kg which is a definite disadvantage. Torque output is the same — 6.5 kgm at 7000 rpm — but you’d think by now that the Versys is noticeably slower in comparison. It’s not. It’s probably the other way around. Or it at least feels so.

The most distinctive additions to the Versys package, the sport-touring bodywork aside, are the suspension bits. A new 41-mm inverted fork with easily adjustable rebound damping and preload is the newest of these bits and while the offset rear monoshock is a carry-over, a new swingarm (unlike the Ninja/ER’s tubular unit) is a welcome addition to the rear as well. This, coupled with a 1-degree increase in rake (26 degrees now) and the resultant 108 mm of trail are definitive indicators of the crucial setup changes that make up the Versys’ anatomy.

Great news, but how does this translate to the Versys’ performance? Oh, I can’t wait to tell you, but let’s get to the engine’s performance first. Fire it up and you hear an exhaust note that’s unmistakeably that of a parallel twin, with generous portions of Kawasaki-grade refinement thrown in for good measure. It’s quick to build up revs with no sign of sloth and the higher it revs, the closer it gets to sounding like its bigger, more brutal Ninja cousins. Snick the slick gearbox into first, dump the clutch and — from your 825-mm perch — you will witness acceleration you probably wouldn’t expect. It’s really quick on its feet, the Versys, and if you’re equally adept with shifting gears, you’ll be on the wrong side of 200 kph in virtually no time. All right, so you’re not here to rival superbikes and that’s no problem for the Versys, either. Want to take it slow and easy at 60 kph in sixth gear all day? As you please!

The parallel-twin motor feels unstressed at any given point of its powerband and, much to my delight, is brilliantly tractable in any gear. Adding to this is the superb throttle, which does a clinical but not unexciting job of the rider’s throttle inputs, giving you a sense that you’re a far more composed rider than you actually are. Okay, that proved true for me, at least. Bear with the ridiculousness of my suggestion for a moment, but the Versys really is an excellent machine to learn how to go fast on, just because it offers precisely what the idea of perfect motorcycle response should be. That you can pull endless wheelies on it is an added bonus, right?

It’s a great motor — no two ways about it — but it’s the handling and suspension that make the Versys truly special. To demonstrate how, let me just say that the Versys not only kept up with, but nearly threatened an established superbike with almost thrice the power output, going up the twisties that lead to Lavasa, the vibrant township set far away from Pune. I’m talking about hard, hell-for-leather riding here, mind you, and the Versys didn’t once lose composure while at it. While the workings of the suspension aren’t obvious on the go, it imparts a continuous flow of feedback and confidence which, in turn, ensure your speeds go up from ‘decent’ to ‘nasty’ in about three and a half seconds. Don’t you just love the sound of that?

The Versys isn’t meant to be a superbike-chaser, of course. This is apparent in its riding ergos since you do sit very tall and substantially off the ground. However, thanks to the brilliant ergonomics and aforementioned handling characteristics, grip included, any rider with half-decent riding experience will find pushing the Versys to his/her and its limit a walk in the park. This extends to its off-road performance, too. Again, the Versys was never expected to be even half as good as it currently is, but because of some very insightful engineering and that delicious motor, it does a fantastic job of kicking up dust. You can stand on the pegs and treat it like an enduro machine and it responds in a manner that will bring up memories of the long-gone BMW F650 Funduro. And that’s the biggest, happiest compliment I can think of for the Versys.

So, is there a catch? None in sight, I’m happy to report. The Versys 650 is just one of those surprises the motorcycle gods spring upon us and if you’re looking at a big-bike purchase minus the associated headaches, you’ll do well to splurge on it. It’s a brilliantly designed motorcycle (so good, that I forgot to say a word about the way it looks) that works to perfection on pretty much any terrain you can think of and here’s a motorcycle that’ll get you riding more, better and faster. Care to know the price? Well, that Motodata column exists for a reason!