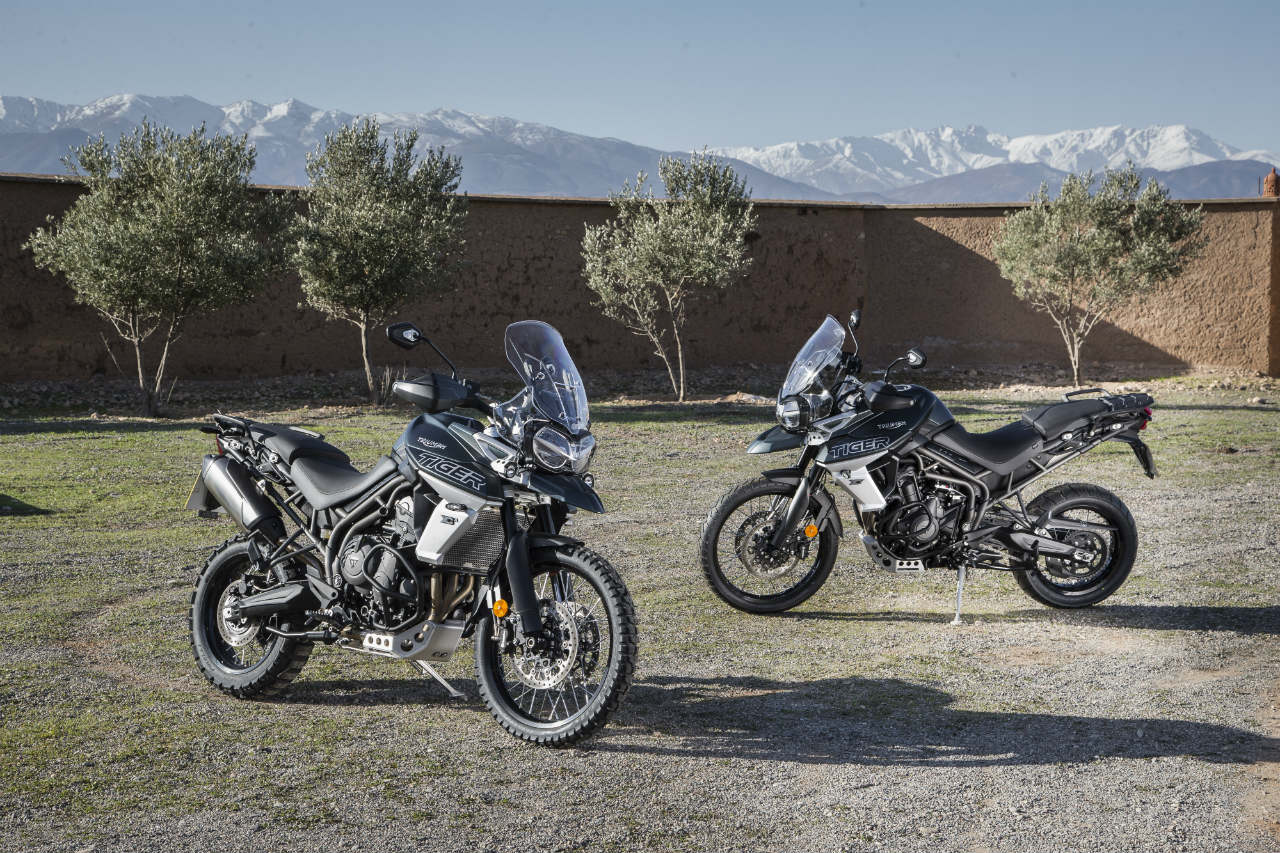 “If you wear a short sleeved shirt around this time of the year, we know you are a tourist”, said our guide, as we trundled cluelessly through the cobble-stoned alleyways in the medina (old city) of Marrakech. Of course our little group was as wrapped up in multiple layers of winter clothing as the locals were. The reason being that summer time around this part of the North-West African continent sees the mercury hover between the forty and fifty degree Celsius mark; a temperature the locals seem to be more comfortable with. We, however, were in Morocco bang in the middle of winter. As crisp and cold as the air was, we didn’t seem to be bothered much by it. A sense of lingering purpose and excitement for the unknown loomed over us as we spent the night in the shadow of the Atlas mountains. Visible from all over the city, the Atlas mountains are a magnificent, snow-clad range that lay about seventy clicks east of the city. We were here in Marrakech to test the updated Triumph tigers for 2018, and we were about to head up into those very mountains to do that. 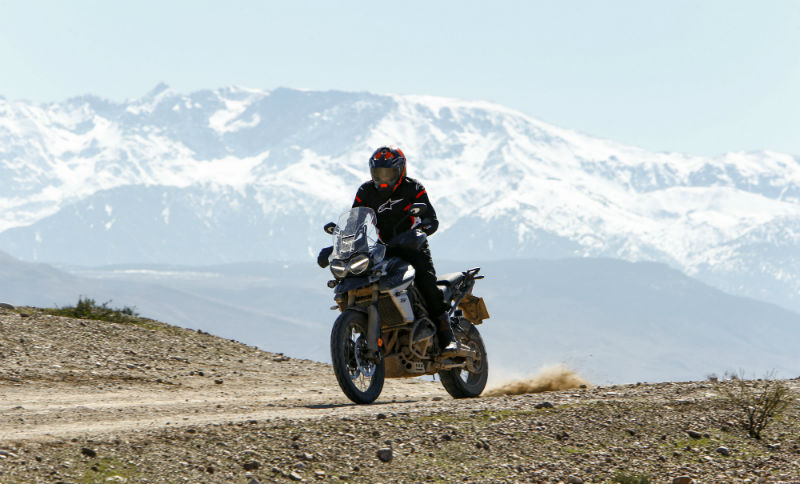 Now if you haven’t already heard of Triumph’s Tiger range, you’ve obviously been living under a rock. The monicker has been alive since 1936, even before Triumph’s Bonneville range, but the genre of motorcycle has morphed significantly as the years have gone by. This current formula is one that first broke the surface in 2010, and it has been a formidable predator ever since. Triumph had managed to create an absolutely inviting, succinctly potent and very fun package when it decided to plonk a triple-cylinder motor in an adventure touring motorcycle. While one had an 800cc mill and the other a 1200, 2018 happens to be quite a fortuitous year for the Tiger, and both motorcycles have seen increasingly significant updates. The engineers at Triumph claim the Tiger 800 has seen over 200 minor changes all over the motorcycle. Of course that’s also taking into consideration that the new Tiger 800 has seven variants with varying levels of upgrades, including a shortened height version for our vertically challenged compadres. We were only here to test the range-topping XRt (road-biased) and XCa (off-road biased) models. 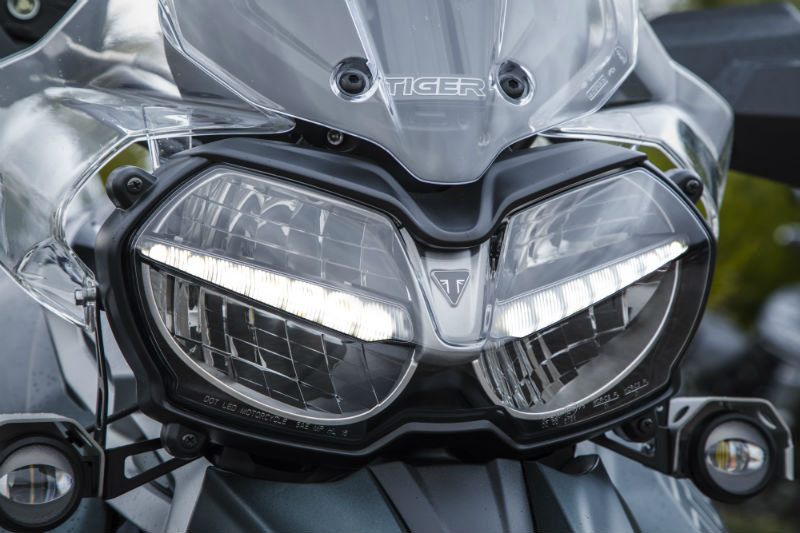 At a fleeting glance, you’d be hard pressed to notice much change in the silhouette of the new motorcycle from the old one. But once you take a closer look, you’ll soon absorb all the subtle changes that have taken place mostly at the front of the motorcycle. First off, the bikes now appear slimmer and more compact than the older models. Triumph has managed this by flattening the surfaces on the tank and front fairing and giving it an edgier overall shape. Then there’s the lovely new DRLs that sit within the headlights and give the Tiger family a strong new identity. The taller, larger windscreen on both motorcycles now has a system that’s much easier to operate for adjustability. You simply push the top of the windscreen forward and slide it into one of five slots that would suit the given scenario; quite easy to operate when you’re on the move as well. Flanking the windscreen are new aero deflectors that add a noticeable amount of protection from wind-blast around the chest area. Sitting pretty behind the windscreen is an all new 5-inch, full colour TFT screen that automatically adjusts the contrast theme based on the amount of ambient light. While this screen and its themes debuted on the Street Triple RS and then the Tiger 1200, it’s now made its way to all the Tiger 800 models except for the base XR variant. Thankfully, the screen is also tilt-adjustable, which makes life a lot easier for riders of varying heights to eliminate reflective sheen, and have a crystal clear view of the speedometer. 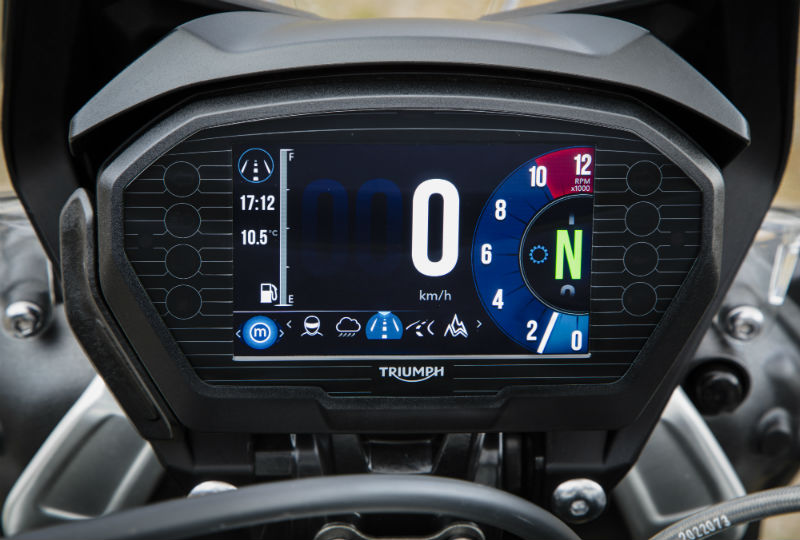 Other useful new features are the illuminated switchgear and the handlebar’s now moved 10mm closer the rider for a more comfortable seating posture. And speaking of seating, the XRt and XCa models also get heated rider and pillion seats to keep your derriere nice and toasty when the mercury drops; aside from the heated handlebar grips that are also available on the other models. While these were welcome features in the frigid riding conditions of the Moroccan mountains, I’d say they’d be quite redundant in our tropical Indian mainland weather. Unless of course the daredevil in you awakens and you choose to do some winter riding in the Himalayas.

Another big update the new Tiger 800s get is riding modes. While the older bikes simply had Road and Rain modes, you’ll now get Sport, Off-road, Off-road Pro and a custom Rider mode in addition to that. While Sport mode allows the engine to rev more freely and aggressively, Off-road mode gives you ABS at the front while the rear switches off, and you get off-road traction control which allows for fifty percent more slip from the rear wheel than the speed of the front wheel. While it certainly is a good safety net to have, the more experienced among us will find the off-road traction control a little too intrusive. Although, the traction control does kick in a lot more smoothly now and isn’t as abrupt and jerky as it was on the older bike. If you really know what you’re doing, Off-road Pro mode switches off all electronic nannies, and allows you to experience the full, unfettered potential of this beast. Or, if like me, you still want to be a little cautious off-road, you can opt for Rider mode and keep the off-road ABS on and allow traction control to stay off. When you’re on the move you can toggle between the three road modes, but you will need to come to a complete standstill and shut throttle if you want to get into one of the off-road modes. 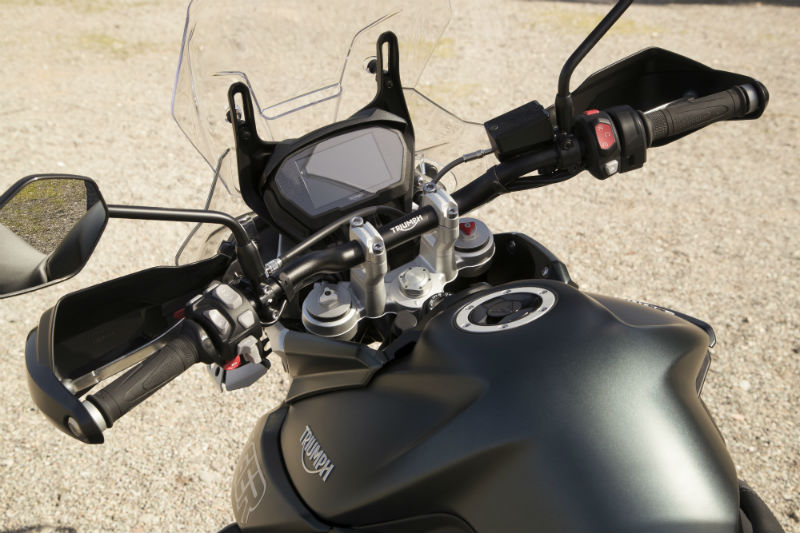 The familiar triple-cylinder motor remains fundamentally the same as before, and that’s a good thing. There are of course a few tweaks that sweeten it even further. Most importantly, the engine gets a new crankshaft and clutch. While engine feel retains the smoothness and linearity of the older motor, it revs up a lot more freely now. Of course one of the updates also includes a revised, twelve percent shorter first gear, which is a welcome change for urban riding, or when you hit the dirt. Not only do you get stronger acceleration, the tractability of the engine has increased even further; you no longer need to slip the clutch when crawling through slower off-road sections. The exhaust has been revised too. Aside from being more compact and shedding a bit of weight, the new internal piping has allowed that triple-pot growl to get an even throatier note. Gone is the high pitched whistle that was there on the older bike. The road-biased XRt gets fully adjustable front suspension by Showa, while the lower XR models will continue with a non-adjustable setup. The XC models still get the fully adjustable WP suspension. But there’s also the addition of Brembo brakes, which replace the Nissin units on the middle and top-spec bikes.

Once you get moving, you’ll find the riding experience to be a very familiar one. The Tiger 800’s tubular steel trellis offers excellent feel and feedback. The bikes tend to feel composed no matter what you throw at it. Fitted with the shorter but wider cast-aluminium 19-inch front wheel, the Tiger 800 XRt feels planted when you gas it. Turning into corners is effortless; steering response is quick enough yet very neutral. It did however feel a bit stiff over the bumpy Moroccan back roads. And thanks to its shorter stature, scraping pegs around corners is quite a common occurrence. The taller Tiger 800 XCa bypasses this syndrome; you’d have to dip really deep into the corner for the pegs to scrape on this one. It also handles bad roads a lot better; it simply glides over imperfections and undulations in the road surface. The XCa feels just as solid but needs a little more effort to turn in the corners thanks to its spoked, 21-inch front wheel. Despite this, feedback through the handlebar is still very good. In stock form, the XR range is shod with Metzeler Tourance tyres and the XC range gets Bridgestone Battle Wing rubber. Both tyres work decently well across different types of road surfaces and should also suffice for a bit of trail riding. For the more serious stuff, you can opt for the Pirelli Scorpion Rally tyres for the XCa. While road grip is only slightly compromised, you’ll have an absolute ball with these tyres off road.

Our second day of exploring the Moroccan landscape involved a decent amount of off road. Wide open expanses of desert meant the XCa was in its absolute element. Hard packed mud, loose gravel and a tiny bit of sandy, dried up river bed, encompassed the perfect setting to see how off-road worthy the bike really was. And truth be told, it did impress, immensely. It absorbed everything we threw at it with complete authority. Despite a few bumpy sections and a long stretch that saw the throttle being held wide open all the way to fourth gear, the chassis did not get even slightly unsettled. I on the other hand, may have skipped a heartbeat or two when I looked down and saw the speedometer cross the 150kph mark, still climbing. It’s in this sort of barren expanse that you can truly experience what 800cc of displacement really translates to. And at low speed, the tractability of the engine meant you rarely ever needed to go below second gear, even at an absolute crawl. Of course our Indian off road landscape is a tad more technical. And at low speed, you’ll definitely feel the heft of this motorcycle a lot more. 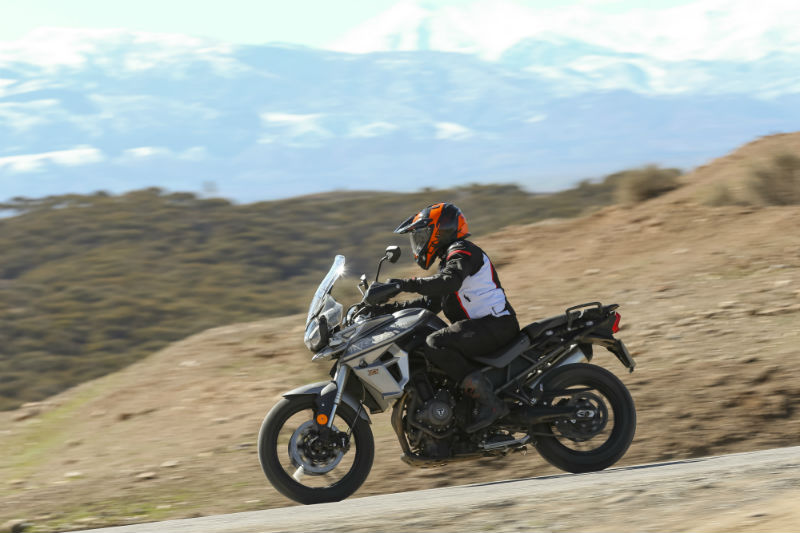 But, whichever way you look at it, the new Tiger 800s are definitely an improvement over the older models. Considering how friendly and approachable the old models were, it’s hard to imagine that formula getting better than it already was. Triumph have managed to pull that off while retaining all the bits we loved about the old bike. If I were a reckless optimist, I’d say Triumph has come pretty close to making the perfect overall motorcycle. But I’m not, so I won’t say that. But I will say that Triumph has given us some absolutely fantastic machines in the past, and that trend has certainly not stopped with the new 2018 Tiger 800. The bikes should launch in India sometime around the middle of the year. And given that BMW have recently launched the very capable F750 GS and F850 GS in India, it’d be interesting to see how well this new British engineering and grit stacks up against the German’s.