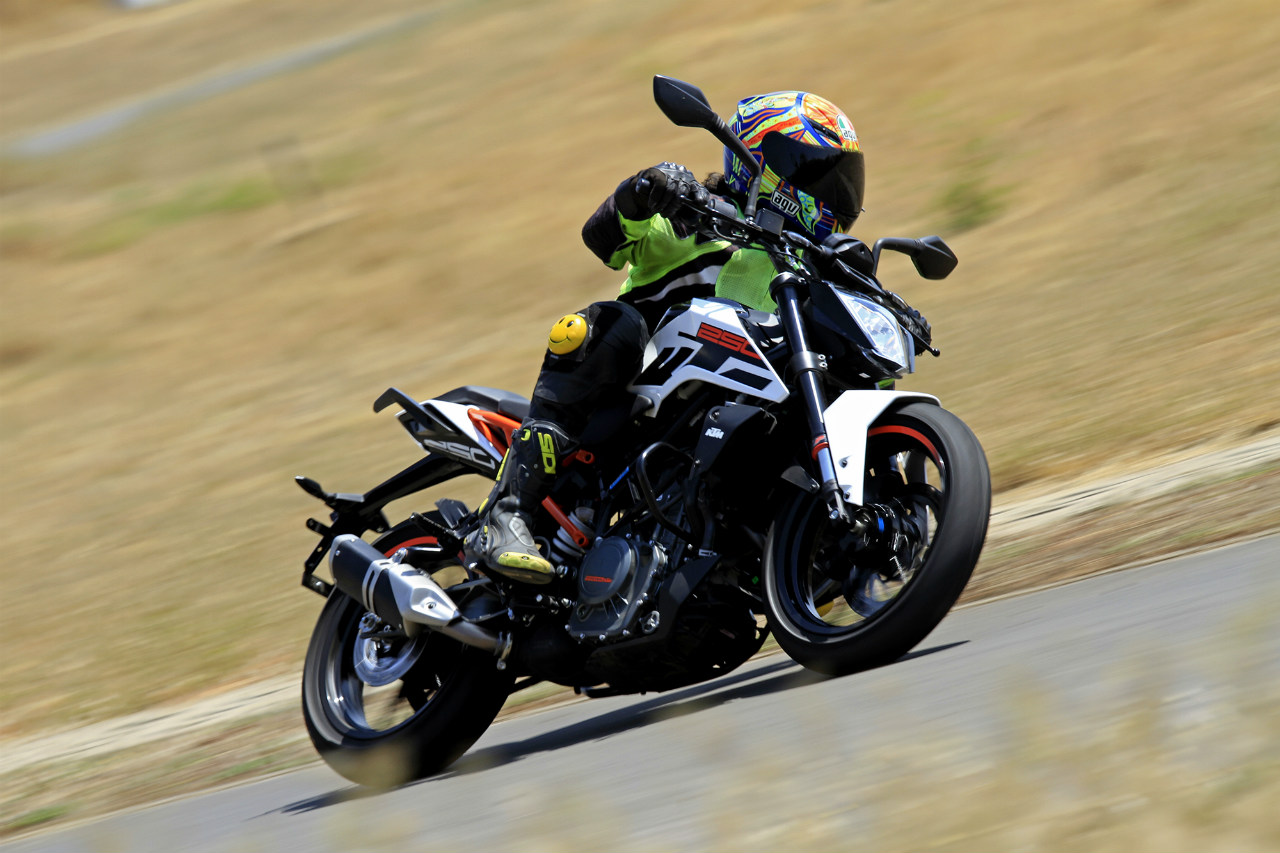 In a world obsessed with perceptions, going soft is frowned upon. In its more rudimentary meaning, going soft indicates a loss of strength resulting in a diminished ability to carry out an assigned function. What we fail to see, however, is that it can also mean becoming more friendly and inclusive. That’s what the KTM 250 Duke is all about.

Leading up to its launch, rumours flew thick and fast of a new third sibling in the Duke family in India. And like most people, I found myself wondering if a 250 Duke would make sense between the 200 and the 390 which are two proven quantities of motorcycling fun. If anything, I thought it was to be a 390 lookalike for those who didn’t want to buy the real deal. A few hours spent riding the 250 Duke at Bajaj’s test track at Chakan proved how wrong I was.

The 250 Duke, like the new 390, now glares at the world with a face inspired by the 1290 Super Duke R, the flagship naked monster that KTM scares the world silly with. And as is the rule with all modern KTMs, the 250 is going to get more than its fair share of appreciative stares. Even if it is all new,  the bodywork is a typical example of aesthetic audacity from Mattighofen. These smaller Dukes carry a visual aggression not found in motorcycles that are twice or even thrice as bigger.

The new steel fuel tank (13.5 litres) is now flanked by new extensions that announce this new bike’s displacement. The new rear subframe adds a bit of bare-bones delight, exposed until it disappears into that neat-looking tail. And there’s also a side-mounted exhaust providing some return to aesthetic convention on KTM’s part. The meter console is the same as the Duke 200’s which is no bad thing, and overall fit and finish is what we expect from KTM – neat and solid.

The 250 Duke’s trellis frame carries a 250cc motor that’s based on the 390’s all-conquering one. In the newest of Dukes, it makes 29.6 bhp at 9000 rpm and 2.4 kgm at 7500 rpm, numbers that are fun to get along with on a daily basis. However, don’t go expecting a nature similar to the other two Dukes. The 250 isn’t a cat on a hot tin roof, but more of a feline that’s playfully chasing a laser-pointer dot around on a carpet.

Perhaps it’s because this is the first of the new Dukes I’ve ridden, perhaps the new 390 feels like this, too, but the 250’s feel was very different to what I was expecting. The motor is strong, as you’d expect from a 30-bhp motorcycle, but it’s more grown-up in its behaviour than its siblings.

The 250 Duke pulls satisfyingly towards its redline in each of its gears, reaching 120 kph fairly quickly and going on to hit an indicated 142 kph on the Chakan track’s main straight. However, the going gets tough after 130 kph; I’d expect real-world top speeds to remain around that number. Also, the 250 Duke’s sixth gear seems to be an overdrive ratio, providing little or no addition to speed. Should be good on the highway, though.

DYNAMICS: WHAT THIS BIKE IS ALL ABOUT

The 250 Duke is a compact motorcycle, but it has a more spacious riding position than the Duke 200, and that sets you up for a fun time in corners. The new open-cartridge front fork and the revised monoshock at the rear make the most of that 1357-mm wheelbase; the 250 Duke is a motorcycle that you can throw around in the most impolite of ways. And it will always behave itself because that’s what it likes the most.

The MRF tyres are work very well on this bike and provide all the grip you need on a perfectly laid out track. Whether it’s fast sweepers or tight hairpins, the 250 Duke’s composure remains similar to that of a saint albeit one that encourages you to get up to as much two-wheeled shenanigans as possible. I can’t comment on the ride quality because there were no real bumps to ride over, but braking and accelerating hard into and out of corners did suggest that the suspension has let go of its earlier uncompromising nature. That should certainly be good news for the real world where people have backbones to worry about.

I was a bit doubtful about the fact that the 250 Duke comes with the brakes from the 200 Duke. But that 300-mm disc up front and the 230-mm disc at the rear are up to the task of tackling a kerb weight of 161 kg and the surplus speed that the extra 50cc and 5 bhp bring.

IN CLOSING: FRESH AND SWEET ORANGE

At Rs 1.73 lakh (ex-showroom, Delhi), the 250 Duke slots in neatly between the 200 Duke and the 390 Duke. Is it worth that price, though? I think it is, especially when you consider the increased overall capability that it offers over the 200 Duke; it’s not all that much faster than its smaller brother, but it’s surely a whole lot more grown up and that will definitely attract the people who get turned off by the Dukes’ usual no-compromise approach to things. I expect it to end up in a lot of garages that seek a sporty naked bike that does everything you ask of it. A real-world ride awaits at a later date, but I expect my initial impressions to be confirmed. Until we ride the new 390 Duke, the 250 Duke is the softie that neither of its siblings can be. Trust the middle child to be the voice of reason.