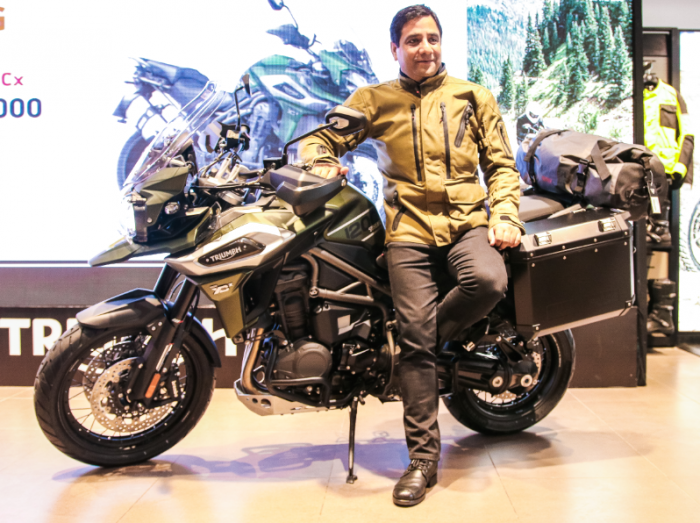 Triumph Motorcycles India has launched its range-topping adventure-tourer motorcycle, the Tiger 1200. In its XCx guise, it’s claimed to be the most advanced Tiger ever and, at Rs 17 lakh onwards, sits atop the current Tiger range.

Like the all-new Triumph Tiger 800 range that was launched in India recently, the Tiger 1200 is also new. Aesthetic improvements include new bits like the bodywork, graphics, wheels, badge and side panels, and even colours.

The engine has been updated for better power delivery, which combined with up to 10 kilos of weight loss over the previous generation, is said to make the Tiger 1200 more manoeuvrable both on and off the road.

The 1215 cc triple-cylinder engine makes 139 bhp, sends power through a shaft drive, making itself the most powerful shaft-driven motorcycle in the segment, claims Triumph. The touring capabilities are further enhanced with features like an electrically adjustable windscreen, cornering ABS and traction control, heated grips and seat, and even power sockets. The cruise control has been updated on the new Tiger 1200, while the handlebar switches continue to be backlit.

MD, Triumph Motorcycles India, Vimal Sumbly said, “As the pioneer in this category, the remarkable Tiger 1200 series with its state-of- the-art features and rider focussed technology is suited for both on and off-road riding, ensuring superb stability and control. It is a bike that allows riders to gratify their desired adventure, to go anywhere and everywhere, be it in a daily commute to an adventure on difficult terrains spreading the corners of the Earth. These developments compliment the Tiger’s agility, its easy riding style, as well as its existing distinctive Tiger poise — the new 1200 is built for an advanced level of adventure and maximum dominance. The new Tiger 1200 is so advanced it has taken a full four years to develop, and today we’re proud to launch the most advanced adventure motorcycle that boasts of significant class-leading engine characteristics, rider-focused technological innovations and premium styling. These are by far the most adventure-ready Tiger ever built.”