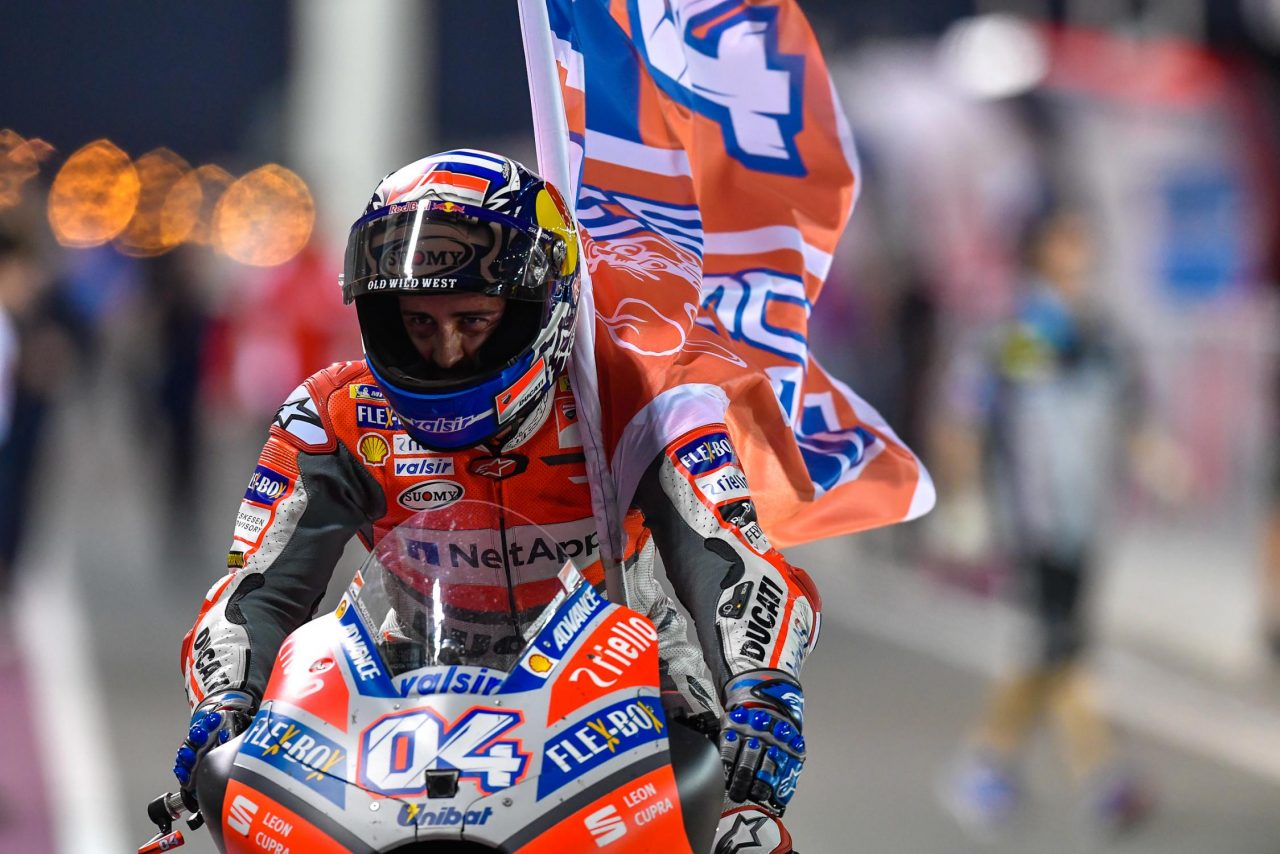 It wasn’t a typical Moto3 end,but this time around only two riders battled it out for the first place. After missing the pole position by a fraction of a second to Niccolò Antonelli, Jorge Martin took the holeshot along with Antonelli when the lights went off for the first time in the 2018 MotoGP season. Later, the fight for the first place narrowed down between Enea Bastianini, Martin and Aron Canet. But the Leopard racing rider fell a victim for a front end slide at Turn 6, and after that it was just Martin and Canet who fought all the way till the finish line. In the end it was Martin who won the Moto3 curtain raiser at Qatar. Notably, Martin had also won the last race of the 2017 season. Behind them it was a pack of riders fighting for third place, but eventually it was Lorenzo Dalla Porto of Leopard racing who completed the podium with a third place finish. And pole sitter Niccolò  Antonelli settled for fourth place. With a first place and sixth place finish, Del Conca Gresini Moto3 Team leads in the team championship points, and Honda heads with 24 points just 11 points ahead of KTM in the constructors championship.

As the sun set, Alex Marquez started from pole along with Francesco Bagnaia and Lorenzo Baldassarri taking a good start from the front row of the grid. But, it was Bagnaia who took the lead while Marquez and Miguel Oliveira had a slight contact, forcing the KTM rider to run wide. After that it was the Italian who took charge from his fellow countryman Lorenzo and the younger Marquez. But in the latter part of the race Alex had a rear brake problem forcing him to slow down, while Lorenzo took advantage of it and pulled away from the Spaniard. Even though Bagnaia had complete control over the field — and his rear extra hard tyre giving him an edge to push harder —  his consistent performance around the 5.3-kilometre-long Losail International didn’t stay peerless for the whole race. In the final few laps Lorenzo started to close the gap on the 21 year old. He pushed harder only to dismiss Bagnaia’s supremacy with two corners left for the chequered flag, but the VR46 rider fought back immediately and thus took his first win in the Moto2 class. The much expected KTMs piloted by Miguel Oliveira and Brad Binder settled for fifth and sixth, while Mattia Pasini gave it all to take control over third place from Marquez but the Spaniard recovered from his mechanical issue and sealed off the podium. With that SKY Racing Team VR46 leads the team championship with a first and ninth place finish, while Kalex leads the constructors’ championship.

The Moto2 and Moto3 races might have not been as nail-biting, MotoGP turned out made up for that. The Frenchman Johann Zarco made one of his best starts from the pole. He put his M1 clearly ahead of the pack. After that it was the Tech 3 bike number ‘5’ topping the list lap after lap, until he came under a serious threat from Andrea Dovizioso who blasted his Ducati across the straight line to overtake the Frenchman. Meanwhile, Marc Marquez also made his move on Zarco and in no time he was taken down by Valentino Rossi’s factory Yamaha. After that, it was all over for Zarco as he started to drop down the order.

Following it was a two-way battle between Dovizioso and Marquez. It went all the way till the last lap, and in the last corner Marquez made an aggressive move on the Italian, but only ended up running wide giving room for the factory Ducati to take the first win of the 2018 season. Marquez, finished just .027 seconds behind the Ducati, while the 39-year old Valentino Rossi clinched a lonely third place. With his contract being renewed, ‘The Doctor’ still proves to be a serious threat for the championship title.

The teams will now head to the Argentine GP.