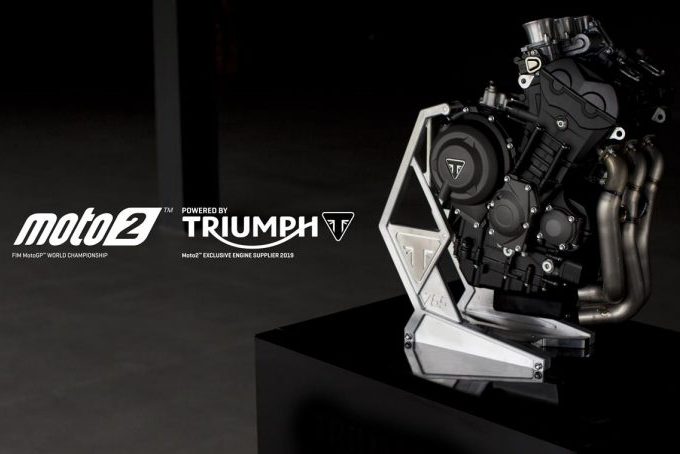 If you, as a proud Triumph owner, have had enough of your fellow biker friends flaunting their favourite bike-maker’s achievements in MotoGP or WSBK, here’s a respite. From the 2019 season onwards, the British bike brand will be an exclusive supplier of engines for the Moto2 category.

The engine in question is a 765 cc triple unit, a derivative of the one used in the current Street Triple, having done successful motorsport stints in the Daytona 675R in the past. For use in Moto2, it will have a fair bit of modifications, including a different cylinder head, tuneable slipper clutch, new sump, race ECU, among other things. There will also be a taller 1st gear ratio on the Moto2 unit, and an overall hike in performance, thanks to an ability to rev more.

You can have a look at the engine in the video:

Dorna’s CEO Carmelo Ezpeleta, said, “We are very excited to be working with one of the world’s most iconic motorcycle brands. The Triumph triple engines are renowned for their strong, linear power and torque delivery and have achieved many successes on the track making them the ideal choice for the Moto2TM Championship. We are looking forward to the 2019 season and the beginning of a new generation of Moto2TM in partnership with Triumph.”

Triumph India’s MD, Vimal Sumbly, said, “Triumph has grown at a significant pace in India in the luxury motorcycle segment providing a complete riding experience. In fact, we have received an overwhelming response from our consumers and partners on our association with CSS (California Superbike School) and JK Tyre Racing Championship. Triumph’s exciting partnership in Moto-2 will not only boost brand awareness among motor-sports enthusiasts in India, but will also give riders a chance to own a piece of Moto 2 engine technology with the new Street Triple range.”