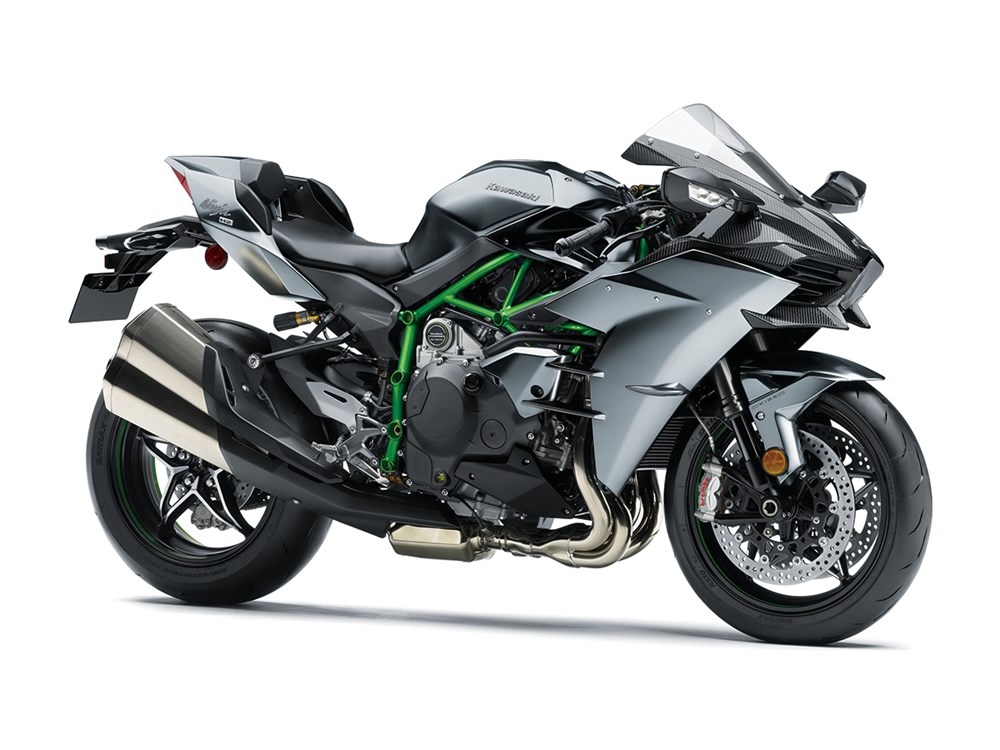 Here’s the round-up of all that is new and exciting from Intermot, the biennial motorcycling fair held at Cologne, Germany. The good part is, all of the bikes listed here are likely to be coming to India by this or next year.

As with a number of other new launches this year, the 2017 S1000RR is now Euro4 complaint, and thankfully, it has not robbed the engine of any horses. The cycle parts are more or less the same, but there are key software updates. The optional seven level banking-sensitive DTC traction control is now standard, and ABS Pro gets added to its suite of electronic assistance tools. Also, S1000RRs are going to come with a single seat as the default option from now on. However, a pillion seat and rear footrests are available as a no cost option.

While the tastefully done RnineT Racer was the talk of the show, the other RnineT – the Pure – was quite interesting too. Shorn of all the expensive cycle parts of the original RnineT Roadster, the Pure is expected to act as a blank canvas on which the hundreds of options that BMW offers, can be fitted onto. The suspension is quite basic, with a non-adjustable 43mm front fork and simple monoshock, with traction control only available as an option. The all-black frame houses the 110 bhp Boxer motor – which is now Euro4 complaint – while the 17-litre fuel tank is now finished in steel. Only the fuel tank and the front mudgaurd is painted in the sole color choice – Catalano Grey – while rest of the surfaces are finished in anodised aluminium or brushed stainless steel.

Suzuki finally comes around and reveals a 125cc version of its GSX-R ( Yamaha has been making the YZF-R125 since 2008). While Suzuki has not released any numbers, it has claimed that the R125 will have the best power-to-weight, torque-to-weight, acceleration and fuel economy among the other 125cc competitors. To give it some perspective, the YZF-R125 produces 14.7 bhp and the Aprilia Tuonu 125, which was also showcased at Intermot, produces 14.7 bhp. Aimed at learner riders in Europe, the GSX-R125 gets  some nifty technology, like, keyless ignition, LED headlamps and a wide LCD screen for the instrument console. However, this 125 is a long way away, since it expected to be available in Europe in the middle of 2017. Expect the GSX-R250 to reach our shores before that.

A few lines cannot do justice to what is an all-new Suzuki GSX-R1000, something everyone has been praying and waiting for years now. So, just the quick, juicy details for now. The engine is a marvel in itself because it is the first litre class bike with variable valve technology, with the actuating mechanism entirely mechanical and not hydraulics or using solenoids. The new shorter and narrower engine produces 199.2 bhp and 12 kgm, with a 10 bhp boost above 10,000 rpm thanks to variable valve tech. While the new GSX is going to stick with a conventional passive suspension system, it gets all the electronic aids – a 10 level traction control system, riding modes, a six-axis Intertial Measurement Unit, launch control and a brake sensitive ABS, which has become the norm in this segment.

Suzuki’s big adventure bike, the V-Strom 1000 has got some minor updates for 2017. The range has been simplified with just two models, the standard V-Strom which suited for more on-road use, and the wire-spoke-rims XT, the off-road version. Changes to the bikes include a new windscreen design which is 49 mm taller than the old one, and can now be set in three different positions. Also new is a five-axis Inertial Measuring Unit, which can determine the relative position of the bike against the road, in a corner, and therefore allowing the cornering ABS to work better.

Yamaha has added a bit of crazy to the MT-09. Not as crazy as the press release though (“The Dark Side of Japan never sleeps. Hidden by the infinite darkness, a dynamic force has evolved”). Yamaha’s best selling triple gets the LED-insect-eye-headlights from the MT-10 and a new LED tail lamp. Other than aesthetics, the MT-09 also gets the Assist & Slip clutch, which, in other words, is a slipper clutch and the Quick Shift System. The front upside-down forks have been uprated to 41mm, with adjustable compression damping in the left fork with rebound damping on the right. Although, like others, Yamaha has made the MT-09 engine Euro4 complaint, but, unlike others, there is no loss of power.

The sinfully fast H2 gets a couple of mechanical and software updates, and a new upper cowl made of carbon-reinforced plastic (which explains the ‘Carbon’). This year, you are a nobody if you dont have a six-axis Inertial Measuring Unit in your bike, and so Kawasaki has fitted one of these Bosch units on the H2. Positional data from the IMU is used by the H2’s other electronic aids to work  more accurately together to help in every riding condition. Other changes are the addition of cornering ABS, an auto blip function, a redesigned exhaust to help the engine be Euro4 complaint, and a new Ohlins TTX shock for the rear for better high speed reliability. However, the most talked about new feature is a lean-angle calculator which is displayed on the instrument console.

Restricted to only 500 examples, the Kawasaki ZX-10RR is a homologation special with improved cycle parts to help it cope with track racing. The stock wheels and tyres have been ditched for lighter Marchesini wheels and a stickier Pirelli Supercorsa SP tyres, tyre sizes remaining the same. The crankcase is reinforced and the cylinder head is modified to accept high-lift cams (although not offered as standard), along with DLC coated tappets to cut down on friction. The RR also gets Kawasaki’s new bidirectional quickshifter and a six-axis Inertial Measuring Unit, who’s data is used to allow the other electronic aids to step in more effectively and accurately. The only color choice is black, the same one from the ZX-10R Winter Edition.

Among the more important India-related news, is the Ninja 650 update for 2017. Gone is the side-mounted rear shock, with it being now more conventionally positioned above the rear swing-arm. Although power is down by 3 bhp, in order to make the engine Euro4 compliant, the bike is also an impressive 19 kg lighter, thanks mostly to the new trellis frame. It gets an assist and slip clutch, new Nissin calipers and an updated Bosch ABS system. The biggest change is the styling: it is sharper, drawing inspiration from its bigger brother, the ZX-6R, while the instrument console gets a new digital display with a analogue tachometer in the centre.

In Ducati’s words, the SuperSport is aimed at riders who are looking for ‘a good looking sportsbike that is fun to ride and can be used everyday’. This 113 bhp entry-level Ducati sportsbike shares the same 937cc Testastretta engine with the Hypermotard, and true to its everyday riding credentials, 80 percent of the 9.8 kgm of torque is available below 3000rpm. The SuperSport has been developed from scratch by Ducati, with the trellis frame that uses the engine as a stressed-member. The single-sided swingarm is also unique to the SuperSport. It shares it suite of electronic riding aids with the Hypermotard, but gets some good stuff from the range-topping Panigale too, like the bidirectional quickshifter and a suspension geometry that allows a 48 degree lean. And yeah, that headlight cluster also doubles up the air scoop. The SuperSport is also Euro4 complaint, as is the new 1299 Panigale, Diavel, Multistrada 1200 and Monster 821.

This is it, the new Fireblade. This is not the standard version though, but a more track focused SP variant (With an even hotter SP2 version also unveiled at Intermot). The inline-4’s power is up by 11 bhp to 189 bhp and peak torque is now 11.3 kgm, while there are three riding modes which vary from providing full power, to restricting power through first to fourth gears. The biggest change is Honda’s adoption of an adaptive suspension system: in this case the Ohlins S-EC, which changes the damping and the rebound force depending on the mode chosen, speed, brake input and the roll rate, yaw rate and lean angle from the five-axis inertial measuring unit.

Triumph took the Street Twin and gave it some cafe racer touches to make it the Street Cup. The new touches are a two-tone paint scheme with hand painted coach lining, a higher seat, a rear seat cowl, lower handlebars and a fly screen. While the 900cc engine is mechanically unchanged, the upswept exhausts get a satin black finish. The tail is a bit higher than a normal Street Twin, which results in a slightly more aggressive seating posture. The sporty nature of the bike augmented with the addition of new twin-piston Nissin calipers for the front brakes. It also gets (what our resident Street Twin owner ruefully admits), a tachometer, set in a beautiful twin-pod cluster design.

KTM has cleaned up its big adventure bike range into just the 1090 and 1290 families. The 1090 is going to be further divided into the Adventure and the Adventure R, with the later designed for proper off-road use. The 1090 range is powered by a 125 bhp V-Twin, passed over from the older 1050, with all that power regulated by the latest in off-road electronic riding aids. Wire spoke rims, fully adjustable WP suspension, slipper clutch, Continental Twinduro tyres and 320mm Brembo brakes are the hardware bits. On the software side, there is multi-mode traction control, multi-mode ABS control and four riding modes.