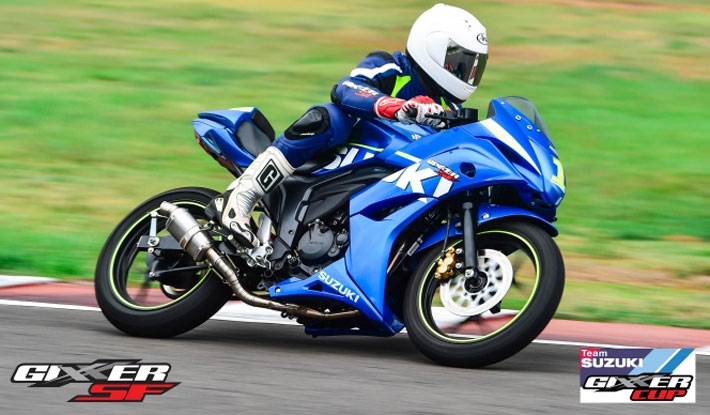 If you thought Suzuki’s re-entry into MotoGP was the end of its motorsport aspirations, you may have been wrong. Suzuki Motorcycle India has announced the launch of its ‘Gixxer Cup’ racing championship, its maiden attempt at hosting a one-make racing series in the country. The Gixxer Cup will run alongside the MMSC FMSCI Indian National Motorcycle Racing Championship, like other one-make series’ of its kind.

The bike Suzuki has prepared for this series is based on the newly-launched Gixxer SF, a full-faired version of its popular naked 150 cc motorcycle, the Gixxer, which also won our Bike Of The Year award this year. The Gixxer SF has been worked upon massively, making it a thoroughbred race-spec machine. It makes do without the road-spec accessories and in terms of weight alone, the race Gixxer is nearly 20 kg lighter. It features, prominently, a clip-on handlebar, rear-seat footpegs and also a performance exhaust which is around 3 kg lighter than on the stock bike. This bike will also produce approximately 18 bhp, making the overall tally rather appealing for aspiring Indian racers. Oh, and it looks hot, right?

The Gixxer Cup will run two separate championship series – Novice and Open. The former will be for competitors with limited or no experience while the latter will include racers who have spent time honing their racing skills on-board similar racing machinery previously. A total of 5 rounds of the Gixxer Cup will be held this year (refer calendar below) and Suzuki will provide a full grid of 20 motorcycles throughout the season.

On the occassion of this important announcement, Atul Gupta, Executive Vice President, Suzuki Motorcycle India Private Ltd stated ‘Suzuki is a legendary name in the racing world, and Suzuki motorcycles are among the fastest and most finely crafted racing machines in the world. Apart from showcasing the real potential of the Gixxer SF to Indian motorsport enthusiasts, this championship will double up as an opportunity for local racers to hone their skills by providing them an affordable platform to gain valuable racing experience and exposure to the dynamic sport of motorcycle racing’.

Apart from Suzuki, Honda, Yamaha and TVS run their own one-make championships in India and while the motorsport future of a few of these names is uncertain, it certain has given Indian racers a fulfilling platform and a definite boost. All the best, Suzuki India!