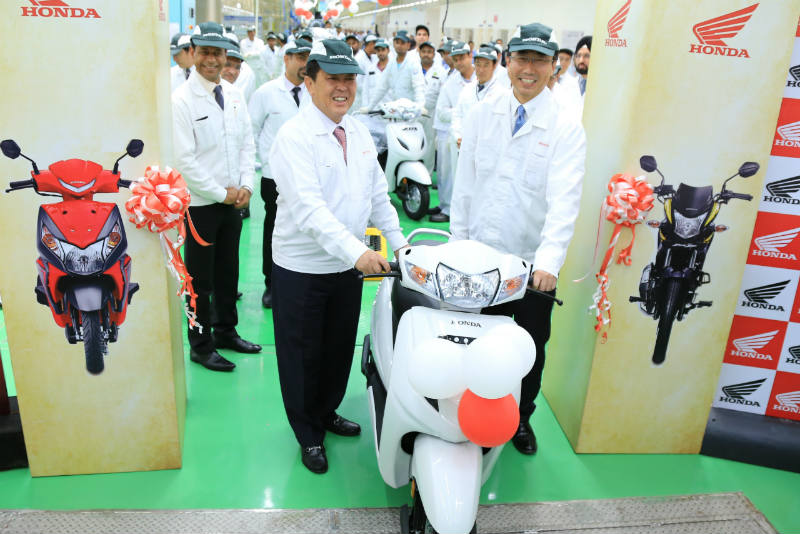 Honda Motorcycle & Scooter India Pvt. Ltd. (HMSI) has inaugurated its fourth assembly line at its third two-wheeler Narsapura plant in Karnataka. With this expansion, the combined annual production from Honda’s two-wheeler plants has gone up from 5.8 million to 6.4 million thus making India the company’s biggest global production base for the first time. Also, with the new assembly line, the Narsapura plant is now the largest two-wheeler plant for Honda in the world, with the capability to manufacture 2.4 million units annually.

Honda 2Wheelers has invested over Rs 2600 crore at its third plant in the country, and an amount of Rs 2800 has been spent by 26 suppliers for the same. The new assembly line is now responsible for over 7000 direct employment opportunities, with another 15,000 jobs created by the suppliers.

Speaking on the occasion, President and CEO of HMSI, Minoru Kato, said, “In the first quarter of FY’2017-18, Honda Wheelers India aggressive growth led the industry momentum. Growing double the speed of industry at 19 per cent, Honda alone contributed 68 per cent to industry’s new volumes resulting in 3 per cent market share gain to ever highest of 30 per cent. While expanding leadership in scooter segment (59 per cent market share), Honda is now also the new No. 2 motorcycle brand of India.”

Honda has incorporated many innovations and manufacturing firsts at the Narsapura plant which have in turn contributed to making it Honda’s highest productivity plant globally. The assembly lines consist of 14 robotic processes which were previously done manually for operations such as paint shop, welding, and material handling. The facility also happens to be the first of its kind (by Honda) to have a fully automated paint-booth air-balancing system. In addition, manufacturing is done with automated processes — with the help of 78 robots.

The company has also invested substantially in CSR, and the plant also boasts 100 per cent rainwater harvesting and zero liquid waste discharge. By October this year, Honda is looking at extensive use of solar power (80 per cent of the energy requirements  to be fulfilled with that), and reduction of carbon footprint (by 50,000 tonnes of CO2 emission).