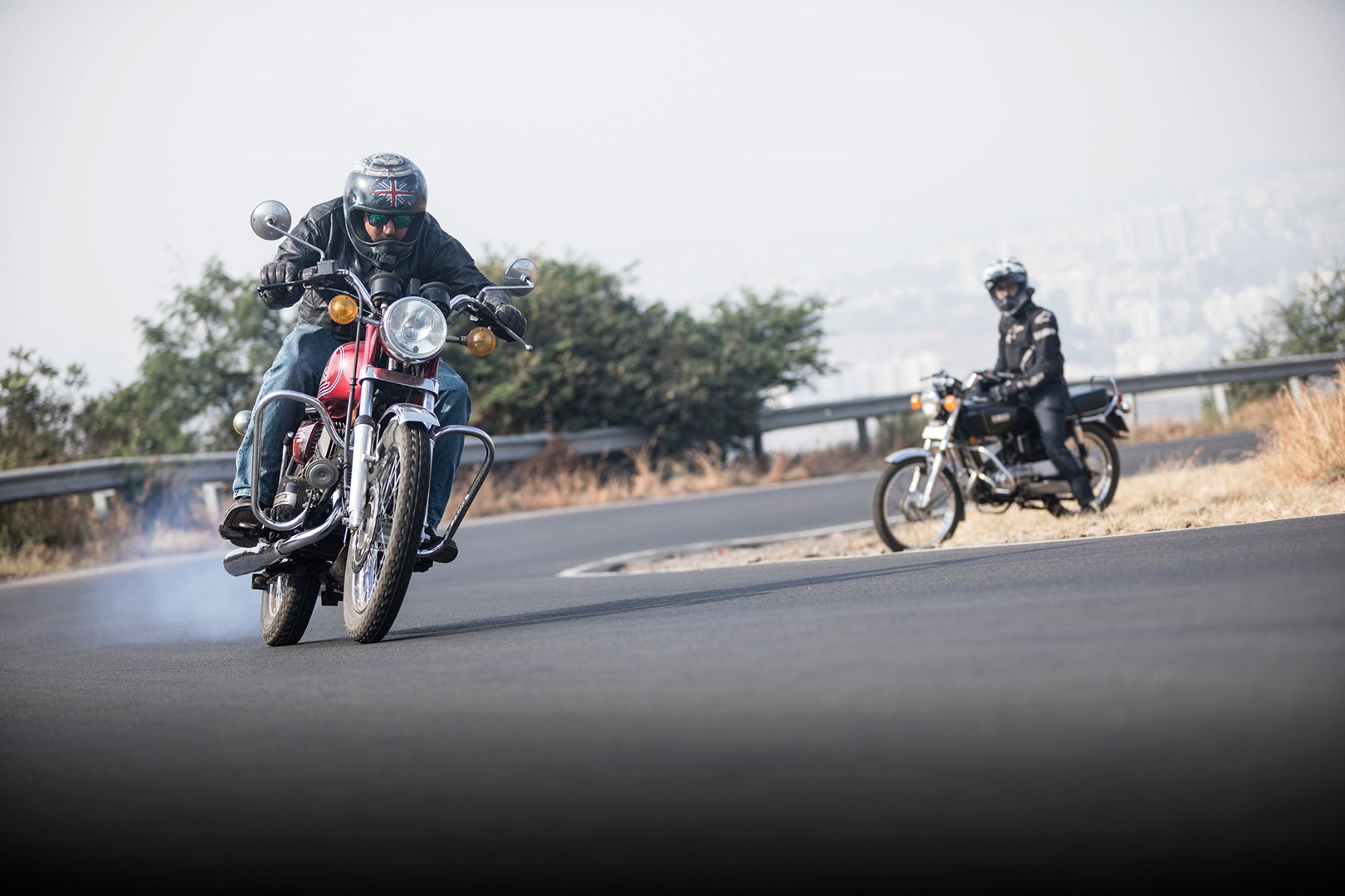 A lot has changed in the decade just gone by. There are now dedicated adjectives for the new generation, people known as ‘millennials’. Back in the day, if our generation demanded a motorcycle or a mobile-phone, it was unanimously referred to as ‘spoiled’ in all available languages. This was mostly accompanied by the physical application of ‘slap’ followed by a stern instruction ‘go study!’ 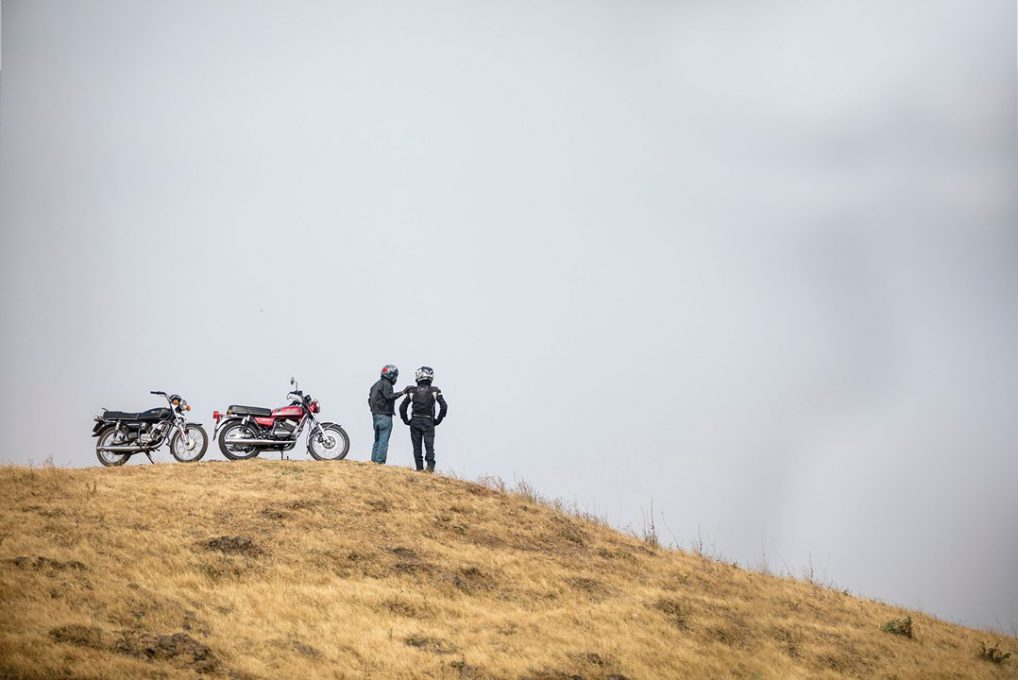 Anyway, as we’re now into a new year in a new decade, it felt ideal to introduce our in-house millennial, Aadil (1992 born!), to some gems of the bygone era of motorcycling in India, right before he takes the big leap, leaving us and going seven seas away to the snowy pastures of Canada for further studies (by the way, no motorcycle riding for six months of the year there, Aadil. Just saying). So here we found ourselves, Aadil and I, standing next to two pristinely kept motorcycles — a 1984 Yamaha RD 350 and a 1987 Yamaha RX 100. No prizes for guessing who got the keys to which. 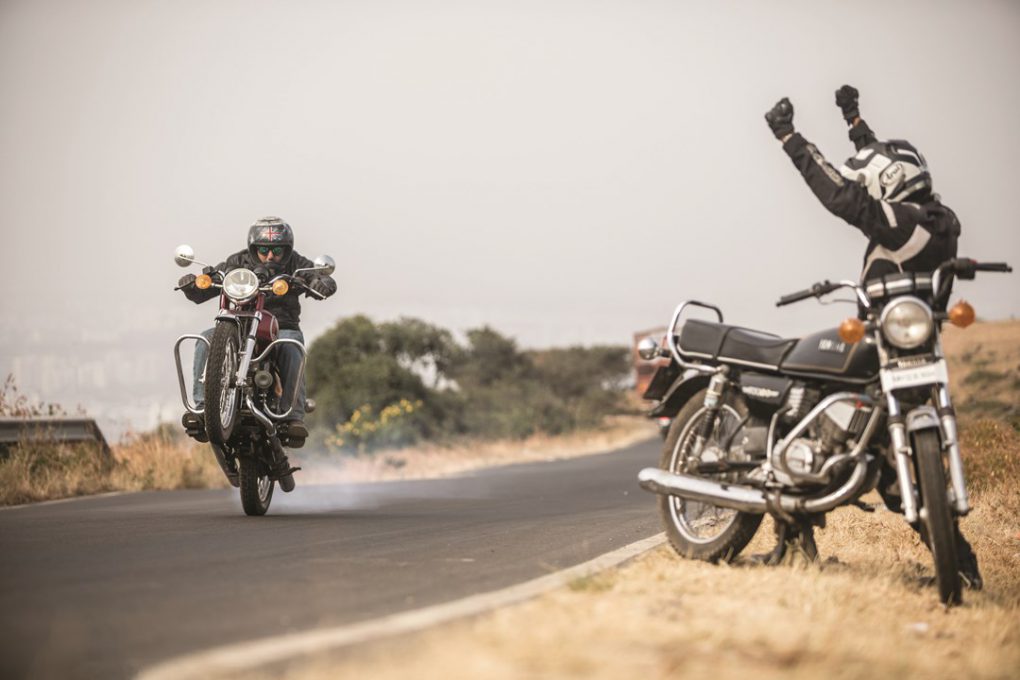 Thankfully, Aadil has spent enough time around our in-house grease monkey, Kyle, and he knew that filling petrol in a two-stroke motor had something to do with oil-mixing. The oil reservoir on the RX 100 was already tanked up and it only needed petrol. The RD 350 needed 2T premix. Aadil intently watched as I poured in the mix and gave the remaining 2T oil back to the owner of these two beautiful machines. Basic etiquette.

Tanked up and ready to head to one of the mountain roads near Pune, it was a long way through crowded roads before we could experience the true-blue two-stroke symphony. Through city streets, I let Aadil be ahead and watched him zip past traffic, leaving a cloud of thick blue smoke and choking everyone behind him. At one point, I saw this lovely elderly couple at a traffic light hurriedly covering their faces with a scarf and a handkerchief to avoid the smoke. Cute.

Once out on an open stretch of road and away from traffic, we couldn’t help but let our right wrists do the talking, belting down winding roads and dancing to the melodic two-stroke roars. Well, amidst all the enthusiasm, our lad did manage to flood the poor RX a couple of times, while I sat there patiently throttling the RD on idle watching Aadil make furious-yet-futile attempts to kick the RX to life. And then he threw occasional embarrassed glances at me, expecting help. Such fun! Pure evil, you say? Nah. Just letting the millennial get a taste of what ’80s motorcycling comprised.

After a while, I could see Aadil secretly wanting to swap to the RD, but I wasn’t going to let that happen. It’s been a long time since I found myself on a blue-smoking hell-wrecking two-stroke. Over a decade, to be precise, back when I had the patience to spend countless hours trying to get both the cylinders firing, and the endless pursuit of perfectly tuning the twin carburettors of an RD, one that I’d managed to leech off a friend who was moving abroad. So this time when I got myself a properly running RD with both cylinders working and letting out a magical lilt through its twin pipes, I was going to revel in it till the end.

Despite Aadil’s countless tries, it was evident to him that he had a long way to go up Indian two-stroke hierarchy before landing on the big daddy of them all. The millennials are into the fast lifestyle — fast food, fast fashion, left-swiping and swap-parts for motorcycles. But the two-stroke regime follows a decorum and sanctity in its functioning; time to be invested; knowledge to be gained and shared; money to be saved and spent. It’s an endless cycle, over and over again, framed only with determination and a consistently diminishing bank balance. 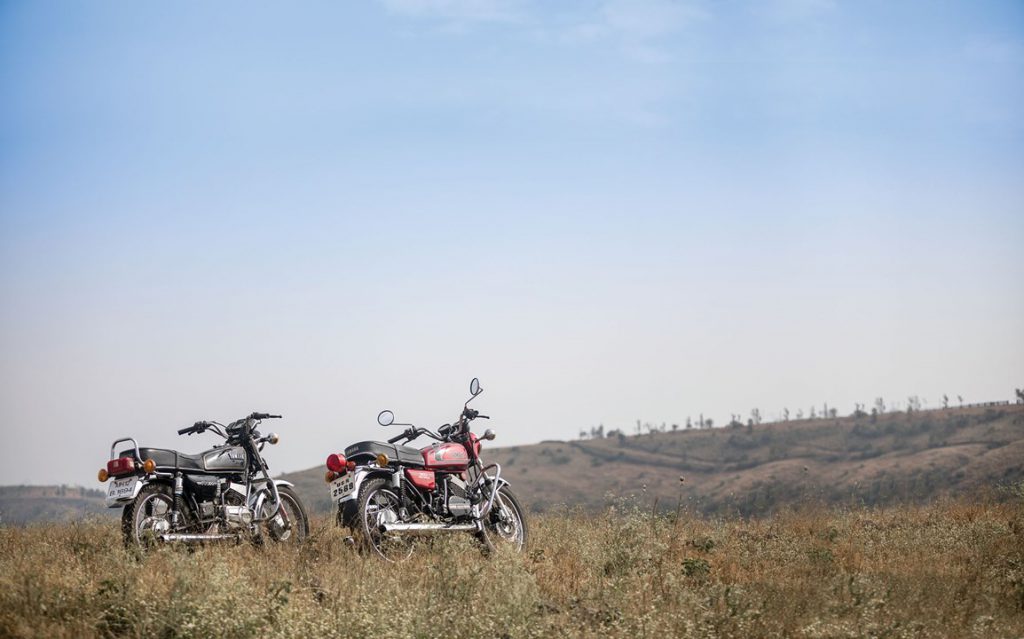 And then, of course, developing and mastering the skill set for handling and stopping a 350cc 30-bhp twin-cylinder two-stroke monstrosity weighing 155 kg (wet), with motorcycle technology that was developed ten years before the millennial was born. The smaller yet extremely rewarding RX was what Aadil had to comply with before he could graduate to the RD. But watching him blast across some of the dirt trails on the slim and peppy RX100 was a poignant reminder of why the RD saw an early demise in just about eight years, while the RX series continued to be on sale for a decade and a half, until the sale of two-strokes was officially banned in the country.

Certainly ahead of its time and way quicker than anything most Indians had ever handled before, the RD 350 was a handful. There have been countless stories of riders ending up in a hospital or worse, and the RD attracting the label of ‘widow maker’. A bit harsh, but for its time, when general public sensibilities went with safe choices, bank savings and family planning, here was a motorcycle that defied logic and common sense. And that is what it built its legacy on, one that still stands today.

A pristine RD fetches a price that is five to six times greater than its original price tag! How many motorcycles can boast that, eh? The RX, on the other hand, was easier to control, gave far better efficiency in an era of ‘Fill It, Shut It, Forget It!’, and came as a worthy successor to the RD. And it also continues to sell at a hefty premium to its original price tag — that is, if you find someone willing to part with it. A true son to its father, then. And two stonking lessons for a millennial.