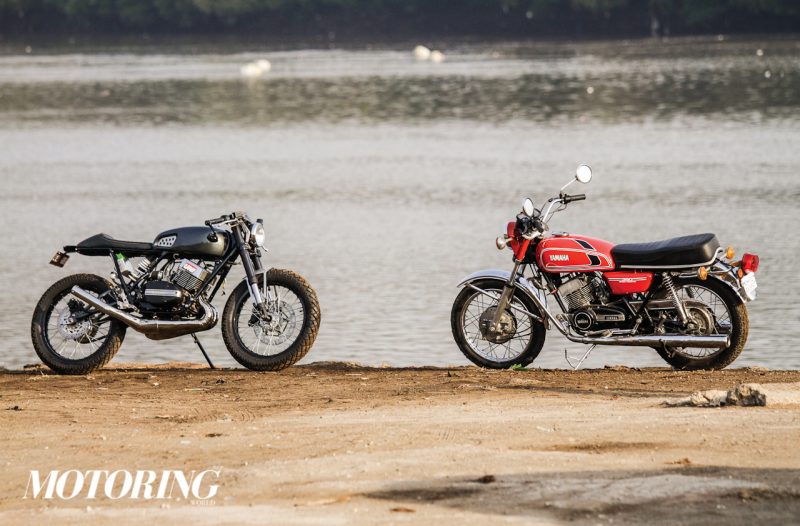 One of the fundamental motorcycling experiences everyone should undergo is to ride a Yamaha RD350 at full clip. It’s overwhelming to be, or trying to be, rather, in control of such temperamental power, especially when the future is always absolutely uncertain. Anything, from an exploding engine to brake failure can happen on an RD350 but until that happens, an RD’s powerband is the most fulfilling place to be on Earth. I was in exactly this very spot of satisfaction until another RD350 pulled up elbow-close. And it looked nothing like the candy red motorcycle I was riding.

This offensive (well, to my moment of sensory overload, at least) motorcycle, owned by Milind Patil, whom I was quick and clever to befriend, is Moto Exotica’s idea of the perfect simplistic café racer. Remember the Moto Exotica Eight from one of our 2015 issues? Yes, this bike has been built by those venerable chaps tucked away in Dehradun, Uttarakhand, and anyone with even the slightest recollection of this outfit will know that nobody builds custom RD350s anywhere in the country the way Moto Exotica does. Arjun Raina, the man behind the stellar custom company, knows a thing or two (or twelve) about making a bike go fast and handle, and this RD350 Café Racer wasn’t spared his engineering brilliance either.

The pristine red RD you see here is also very special and that’s not just because it’s owned by one Bijoy Kumar Y, who founded this very magazine, among other extra-ordinary automotive experiments. It’s one of the high torque models and has been meticulously maintained in bone-stock guise. You’d struggle to find a more complete-looking RD350 today and, best of all, it has the performance to match its legacy. It’s a regular runner, mind you, and it never fails to brighten up Bijoy’s Sunday mornings, as well as of whoever is left in its wake. An RD350 that fires up in half a kick in today’s times is a gem,  all right?

But that’s hardly the most redeeming quality of either of these RDs. What is, is the staggering performance they can spit out of their collective tail pipes, despite them being more or less three decades old. It takes a high degree of commitment to ride motorcycles like these fast and if you ever want lessons in faith and trust, it’s best you look for someone who owns an RD350. This became particularly apparent when, both, Milind (that’s him riding the Café Racer) and I started building up speeds on this morning of a devilish congregation. Even if an RD isn’t fast, it feels like it’s on the limit and that, coupled with the menacing two-stroke wail, amplifies the sensation of speed like nothing else can. It hammers the fear right back into you. And it’s addictive.

This is something Moto Exotica has taken care of, however, by lending the RD agility, grace and manners. Firstly, the Café Racer is massively lighter than the stock RD, which itself improves its responses but that’s hardly where it ended. That the Café Racer was going to be fast was obvious, but something too flickable would probably be a recipe for disaster given how snappy the 347cc parallel-twin can get and so, a pair of 19-inch wire-spoke wheels and tyres were ushered in for the sake of stability. Next came the KTM-sourced USD fork, but that, too, was set-up to allow for more travel than in its stock guise on the Duke range. A custom swingarm, along with an aftermarket-sourced monoshock, was designed in sync with the characteristics of the front-end and this was the final and most exhaustive contribution to chassis setup. The rest of the motorcycle was stripped bare, its side panels were chucked straight into the bin and so were its fenders, footpegs and accessory mounts. Any worthy café racer must be minimalistic and fast, and Moto Exotica’s is both of these with perfection. The masterpiece on the Café Racer is not, however, its toned-down tank or even the delicious, quilted solo seat. It’s the tailpipes. Two independent expansion chambers, designed completely in-house and engineered to extract maximum performance without compromising on reliability, are the only shiny bits on this otherwise understated motorcycle and I can say with conviction that the Café Racer would have been incomplete without them.

If riding an RD350 is fulfilling, riding the Moto Exotica Café Racer is sinful. It’s so crisp, so sharp in its responses, that it will make you want to ride it fast, all the time. The aggressive stance itself plays a major part in influencing your riding style but once you take the ‘Racer past 4000 rpm, you’ve tasted blood and you’re most certainly not going to let off until you graduate from the powerband into the perimeter of fear. It’ll happily hoist its front-end in the first two gears but the added stability ensures it puts the power down where it matters and there on, you’re in for a display of gripping acceleration. The best part is, unlike most other RD350s of similar vintage, you can actually, predictably bring the Café Racer to a full stop. The disc brakes at either end, coupled with the fantastic USD fork/monoshock combination mean serious business.

So, which one of the two would I rather have? Tricky question but since I’m asking, I’d say both. The stock RD350 is sacred to not just the Indian motorcycle enthusiast but also to a huge spectrum of motorcyclists around the world. It’s a living, breathing legend and they simply don’t make motorcycles like it anymore. I want one just so I can give Pulsar-riding yuppies a hard time. It’s got this ‘sleeper’ appeal, don’t you think? As for the Moto Exotica Café Racer, sure, I’ll have that, too! Because the only substitute for a fast motorcycle is one that’s even faster.