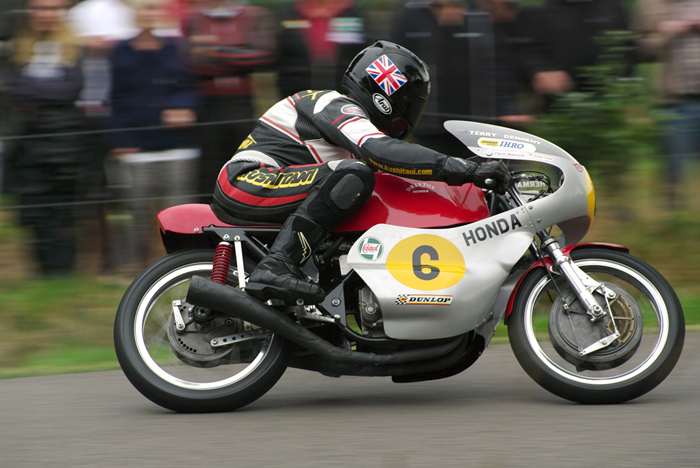 It’s highly unlikely that any other Classic era road racer has been replicated as frequently around the world as the twin-cylinder Drixton Honda. Created back in 1968 by Aussie Terry Dennehy and his mechanic mate Ralph Hannan to go 500GP racing affordably in the heyday of the Continental Circus, this privateer concoction entailed their tuning up a stretched twin-cylinder CB450 Honda K4 motor, and wrapping it in a frame made in Italy by Swiss man-of-many-parts, Othmar ‘Marly’ Drixl. A rider himself of no mean ability, Marly is best remembered for the small series of Drixton frames which he produced in the late 1960s for Aermacchi and Honda engines, originally under the aegis of the then British Aermacchi importer and former Norton works rider, the late Syd Lawton.

‘Marly was one of those people who always made it his business to know what was going on,’ recalled Lawton in an interview we made together before he passed away in 1997. ‘But in spite of this, and the fact that he always seemed to have some deal or other on the go, he was also just about permanently broke! I first came across him in 1964, not long after I began importing Aermacchis. Marly was working on the production line at their factory, and living with his wife and young child in a van parked up by the nearby lake. He turned out to be the perfect intermediary for me in dealing with the people there, since I didn’t speak Italian and he did, as well as English and practically everything else – even though it soon became obvious he was mainly interested in getting me to sponsor him to go racing!’

After their meeting, Drixl did indeed race quite a bit in Britain on an Aermacchi with some help from Lawton, and it was on one of his visits to the UK in the mid-1960s that the two discussed a problem which had recently arisen. The manufacturers of Avon tyres had pulled out of racing and the new triangular Dunlop tyres which were a Hobson’s choice replacement for them proved quite unsuited to the already fingertip handling of the standard Aermacchi frame. ‘Marly said he could make an Aermacchi chassis that would be much better suited to the Dunlops,’ says Lawton, ‘if only I would provide him with the necessary materials. Well, I knew that if I gave him the money to buy enough steel tube to make a dozen frames, he’d probably end up only making one! Marly wasn’t dishonest, but cash burnt a hole in his pocket, which was why he was usually broke. Anyway, I staked him enough to build the first three frames, which he did in the Baroni workshop in Milan, then he sold them through me as Drixtons – standing for Drixl and Lawton chassis.’

Around 25 Drixton Aermacchi frames were built from 1965-69, some of which were snapped up by leading GP privateers such as John Hartle and Kel Carruthers, who finished third in the 1968 350cc World Championship on such a bike behind the MV Agusta and Benelli fours. Not bad for a pushrod single – but the assured handling of the Drixton frame was a key element in this success. Many of the Drixton Aermacchis built back then are still around today, thanks perhaps to their sturdy but somewhat agricultural construction.

The chance to ride the genuine original ex-Terry Dennehy 500cc Drixton Honda now once again owned by Herman Timman, the man who won the 1972 Dutch 500cc Championship on the bike, came on the 2.5-km public-roads circuit laid out on the edge of Basse, a village just 100 km northeast of Amsterdam, which for the past 22 years has staged the annual Basse TT Historic racing event held annually in September.

Being asked to open the course for the day’s events via a three-lap dash in solitary splendour aboard the Drixton Honda meant I had to combine course-learning with understanding how to ride the bike, all very much in public under the eyes of the hundreds of fans lining the track. I needn’t have worried, though – because the Drixton Honda proved uncannily similar to ride to one of its closest rivals to be best of the rest behind Ago’s MV in the 1969/70 GP seasons, the ex-Billie Nelson 500 Paton I owned and raced in the early days of IHRO’s Historic GPs more than a quarter of a century ago.

Like the Paton, the Honda is a 180º parallel-twin (so, one-up/one-down) with a patch of megaphonitis from its twin exhausts between 5000-5500 rpm that you have to work the clutch to try and avoid. But it pulls pretty strongly from 3000 rpm upwards, so drove well down low out of the trio of hairpins on the Basse circuit. However, Herman Timman had the bike still geared for his previous outing on it at the annual Bikers Classic meeting on the big Spa-Francorchamps GP circuit, and while Basse has a pretty fast high-speed section past the finish line, followed by some swoopy but satisfying high-speed curves, it took me until the last of my three sessions on the bike to manage to pull a genuine top gear (fifth) there on the Spa gearing.

Being overgeared meant using bottom gear three times per lap at the hairpins, exploiting the tuned Honda engine’s low down pull to drive hard out of each of them, short-shifting into second, then fingering the clutch lever to coax it through the five grand hurdle in the power delivery, before running it up to the 9000-rpm limit in the gears that Herman uses on the bike today; 10,500 rpm was the redline in the old days, 100 revs more than the Paton whose 73.5 x 57.5 mm dimensions were essentially the same as the 74 x 57.8 mm Honda, but whereas on the green Italian bike it was really critical to use the last 1000 revs because of the extra dollop of top-end power available there, the Drixton’s Honda engine is more torquey, with a stronger mid-range pull in its 7000-9000 rpm happy zone – and yes, I did rev it to ten grand once. Sorry, Herman!

However, although there’s quite a big gap between bottom gear and second and another to third, neutral was extremely hard to find. After stalling the Drixton a couple of times, I realised you have to find it on the move – there’s no chance of doing so once you come to a stop, as Herman confirmed. But races began with a dead engine start back when he won his Dutch title with the Honda, so stalling it because I couldn’t find neutral meant I ended up getting a good grounding in the required push-start technique, which is just as tricky on the Drixton Honda as on the hard-to-start Paton.

Even with the long Spa gearing fitted it’s better to use second gear, then catch the engine as the 180º crank fires on one cylinder and the other one joins in, leap aboard, hit bottom gear, and then go for it. You need lightning reflexes to catch the engine on the clutch as it fires, and then heaps of clutch to pull away in second on the long gearing, abuse of which Herman says leads to problems, so don’t be tempted. I wasn’t. Push-starting the bike in a crowded grid must have been pretty tricky, and the Kawasaki/Suzuki two-stroke opposition would have been shifting into third gear by the time you’d have got the Honda fired up, used the clutch to head for the promised land above 5500 rpm where the engine pulls hardest, and were then ready for action.

When it catches fire the Honda engine sounds gloriously angry, as expressed via the loud roar emitted by its pair of open meggas. It has a superb exhaust note that you’re aware of all the time you’re aboard it – deep, meaty, powerful and fruity. But then I don’t think I’ve ever come across a racing Honda engine which didn’t sound great, so no wonder Herman Timman admits this was one of the things that turned him on to buying the bike when first offered it. The throttle action is very light, thanks to the car-type butterflies in the twin-choke Weber carb, which betrays its automotive origins by the way it doesn’t much like part-throttle openings. There’s a strong pickup out of a turn if you crack it wide open, but feed the throttle in gradually transiting a tighter bend and it hunts slightly, then splutters before clearing itself and coming on strong as you ease the throttles open. Using the Honda engine hard is an acquired skill compared to the Paton fitted with twin cylindrical-slide Dell’Ortos.

But the biggest asset of the Drixton Honda is the excellent handling bordering on the superb delivered by Marly Drixl’s duplex chassis, which I well remember from when I rode the ex-Brennigan bike 30 years ago was literally a revelation. I never expected it to handle as well as it did when I first tested it at Brands Hatch, then when Pete Johnson kindly allowed me to race it at Daytona in 1988 as a thank-you for sourcing him the bike, I was seriously impressed both by its stability on the banking and its infield agility as I raced it to fourth place in the Premier 500 event.

The Drixton frame delivers literally the best of both worlds – it’s planted in the fast turns that predominate at big GP circuits like Monza or Spa, nimble in tighter tracks like Opatija or the Italian street races. On the Basse TT public roads course Herman Timman’s ex-Denehy motherlode motorcycle displayed these very characteristics. Its Ceriani suspension was the benchmark kit of the late 1960s, and the way the bike goes round corners as if on rails is extremely confidence-inspiring; it feels safe, steady and sure, with neutral steering and predictable handling. Another thing the Drixton frame shares with the not dissimilar-design Paton is the superb confidence-inspiring braking delivered by its pair of Fontana drums, the big 250 mm four leading-shoe version fitted up front hauling the Honda down hard for the Basse circuit’s trio of slow turns with lots of feedback and not the slightest instability, backed up by its 210 mm 2LS rear.

The Drixton frame’s riding position is very ’60s, with high footrests and a fairly long stretch over the fuel tank to the steeply dropped clip-ons. It feels pretty short and relatively porky, though, which with a 1340-mm wheelbase it indeed is, plus the low seat back aids throwing a leg over it as you hop aboard after push-starting it, and the bulges in the lower fairing are good for tucking your toes behind. By the time Herman acquired it the Honda had been fitted with the Kröber electronic ignition it now carries, matched by the same company’s tacho with a red reminder strip at 9000 rpm, and a yellow one at 10500 revs standing for $$$$!

Compared to the ex-Ray Brennigan Drixton Honda I rode 30 years ago before it headed Stateside to win AHRMA titles with Pete Johnson, this ex-Dennehy original is infinitely smoother-running, albeit with some low down vibration which smooths out the harder you rev the motor, exactly the same as on the Paton and typical of a bike running a 180º crank, whereas the two-up 360º variety tend to vibrate harder as revs rise. The Drixton Honda ran sweet as a nut down the Basse main straight, and I can imagine it must have been a good bike for the hour-long GP races that were commonplace back then.

Marly Drixl may have been a flamboyant character, but judging by my ride on Herman Timman’s ex-Terry Dennehy Drixton-Honda 500, he also knew a lot about building motorcycle frames. What a pity he didn’t stick at it – although many others around the world have done so for him. They chose a good bike to copy.