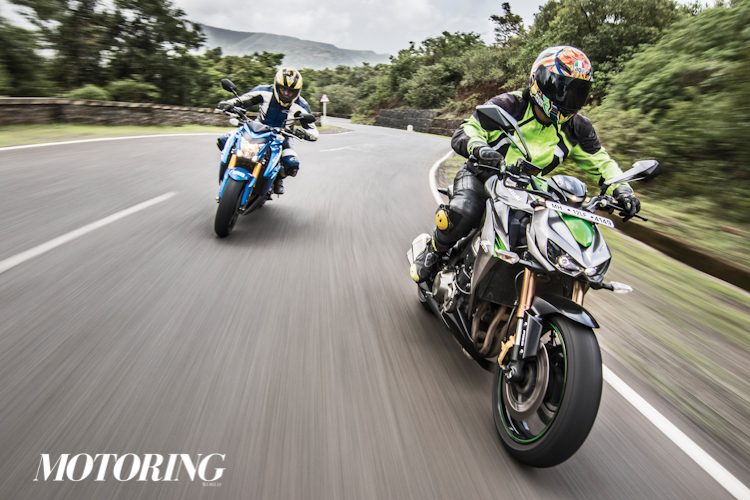 The Kawasaki Z1000 is one of my favourite motorcycles ever. Yeah, quite an ominous start to the story for the new Suzuki GSX-S1000, right? Not quite. You see, right now, on our favourite stretch of twisty road, the Z and S are two litre-class ping pong rackets that are whacking my brain between them until it’s a disoriented ball. I forget one when I’m on the other, and forget the other when I’m on one. I don’t remember the last time I was this happy to be  this confused.
Both of these motorcycles come from the land of the rising sun, home of the inline-four. And they’re both howling tributes to the fact that no one does four-pot motors better than the Japanese. Yet, they couldn’t be more different. One careful look at them is enough to tell.

Both the Z and S assume traditional and purposeful streetfighter stances, with densely-packed fronts leading sparse tail ends into whatever trouble the rider is looking for. However, park these two next to each other and I bet most people will find themselves at the Z. On the greenie, every part — the brake rotors, the seat, the front brake fluid reservoir, the body, the motor, the exhausts, the mirrors — has been designed with certain aesthetic impact in mind. And for a guy who likes two pipes, the Z has four, so you can imagine what that does to me. Overall, the Z simply makes the Suzuki look like it belongs to a previous generation.

Indeed, even though the S is the newest bike of its kind, it really does look like it was benchmarked against the older Honda CB1000R and not the Z. Consequently, it comes out of the box not looking as wild as the Z, though I quite like the S in this striking blue colour. And though the Suzuki may not possess the outright design flair of the Kawasaki, it’s an even match between the two in terms of quality. Nothing seems like it’ll fall off after a few enthusiastic rides… unless you run into something, of course. And the running is where it gets interesting.

The Z is one hell of a troublemaker, its short-geared ‘box relentlessly banging the 1043cc motor’s head into the redline. However, it’s this short-geared nature that also gives the Z immense flexibility around town — slot it into sixth gear and it’ll pull from as low as 35 kph without complaint. Given the way it looks, it might sound ridiculous, but the truth is that the Z is probably one of the friendliest motorcycles to ride around at low speeds. However, show it an open road and it changes into a green monster and goes on a rampage before you can say ‘Bruce Banner’.

What was a docile motorcycle humming along the road a few moments ago, turns into a howling creature with a few downward prods on the gear lever. And a quick twist of the throttle sends us hurtling down the road, front wheel skimming over the tarmac despite all of my weight being over the ‘bar. The riding position puts the rider headlong into the wind and I have to look down at the meter under my chin to see how fast I’m going. The intake roar is great, while the motor sounds awesome when you’re off the throttle. And the best thing is, even when you’re going fast, you’re never afraid of the motor turning around and biting your head off; it remains on your side throughout the ride.

The suspension is a bit stiffer than the Suzuki’s, though it isn’t harsh or anything like that. However, the quick turn-in and short-geared enthusiasm does mean that you’ve to be careful in corners — it is a lot more effort than the S on a twisty road, if you’re going hell for leather. And then you have to live with the fact that anywhere above 4000 rpm, sixth gear always feels like fourth. The Z has many talents, but subtlety is certainly not one of them.

Quite on the contrary, the S is a very accommodating motorcycle. It never feels anything but reassuring, no matter where it finds itself. This is the blue bike’s biggest strength and it allows its rider to go fast with little effort. Surprisingly, the intake roar is louder than that of the Z and that’s always a good thing. The S gets a detuned motor from the GSX-R1000 from 2005. Why 2005? Because the K5, as it was called, has a longer-stroke motor than the current Gixxer 1000, and that’s better suited for road-riding purposes.

The S also gets a very important advantage over the Z — traction control. And that’s something even the current Gixxer 1000 doesn’t get! Anyway, this single feature is worth a lot when you’re going fast on a twisty road. It’s got three levels of intervention and it can be switched off, but setting it to level one or two handles all overenthusiastic throttle inputs. However, it isn’t this that sets the S apart from the Z as far as dynamics are concerned. There’s more to it.

The Suzuki has a 4-bhp advantage over the Kawasaki, but more importantly, it’s 12 kg lighter. And that combined with the more relaxed yet sporty riding position, makes the Suzuki easier to get along with everywhere. The suspension is on the softer side which allows you to get more comfortable on the bike, though it does tend to wallow ever so slightly if you’re braking hard into a corner. The standout aspect of the Suzuki’s handling is the way you can point it wherever you want and it goes exactly there.

As I round a tight left hander that leads onto a short straight followed by another tight left, I find myself far more relaxed on the blue bike than on the green one. I’m able to pick a line and change it if need be far more easily than on the Z1000, and I’m impressed. Both bikes have ABS, so you’re unlikely to redesign the scenery around your favourite riding road. However, the Suzuki’s traction control is a big plus for riding hard. However, when I’m on the Z, I forget all about the S. And so it goes, back and forth, hour after hour.

I don’t think there is a better motorcycle here. These two motorcycles complement each other; each does something that the other can’t, and therein lies the dilemma. Given that the Suzuki with traction control is ` 62,000 cheaper than the Kawasaki with its style is a big factor. If you think so too, then go for the Suzuki and I assure you complete happiness. The Suzuki, honestly, is the better buy. However, there is more to it.

These are both 140-bhp motorcycles with excellent brakes — but for different moods. Around town, there’s not much difference between the two. However, up the speed and the Z keeps you on your toes, while the S is just that much more easier to ride which means you can go faster for longer. To get into the Kawasaki’s mood, you’ll need a few shots of espresso chased down with a couple of cans of Monster. With the Suzuki, a cup of decaf will do just fine. And that’s exactly why the Z1000 is still one of my favourite motorcycles ever with the GSX-S1000 a close second.