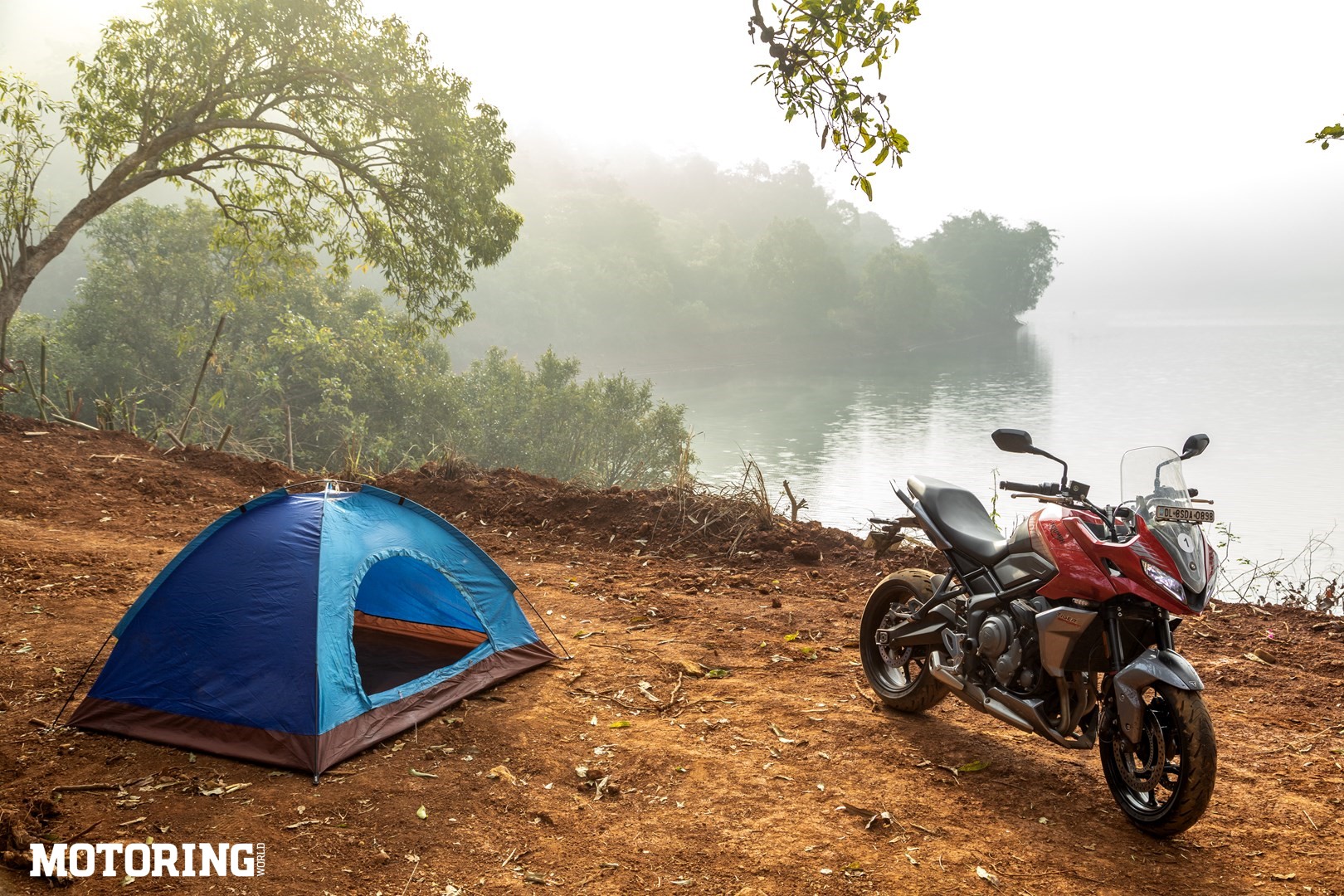 Have you ever looked at something and thought, ‘Hey, what if I took that and did something totally ridiculous with it? It looks like it should hold up fine, I guess.’ That was the thought running through our minds when we decided to take this Tiger and hit the trails on a weekend at Adventure Maval in Panshet, the same venue that hosted the Pune Off-Road Expedition (POE). 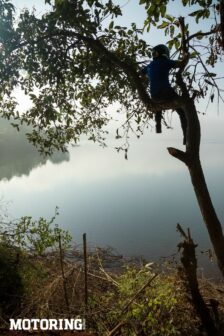 Now, before we get into the gory details of our small trip with the Tiger Sport 660, I would like to make it clear that the ADV-styled sport-touring bike is a true beast on tarmac. The handling is on point, and the riding ergonomics are fairly relaxed. It takes corners with such finesse and confidence, courtesy the 17-inch wheels shod with Michelin Road 5 tyres. The ride quality is plush, with the Showa USD forks up front and the monoshock at the rear taking care of most undulations in the road.

The Tiger Sport 660 is a very sleek-looking machine, with a slim profile and great weight distribution. It also gets an adjustable windscreen that can be conveniently put into the desired position, while riding, by using only one hand. The seat is nice and plush and serves well on long journeys as far as comfort goes. The large 17.2-litre fuel tank adds nicely to the sport-touring aspect of the bike. 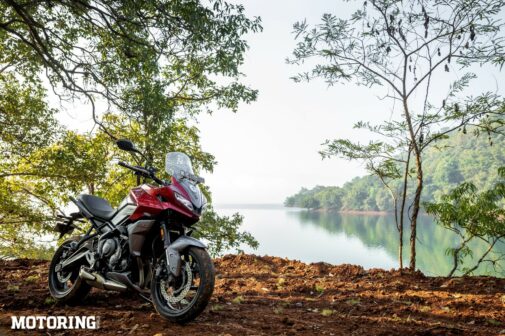 The Tiger Sport 660 carries the exact same powertrain as the Trident 660, with the same power and torque figures, too. This three-cylinder mill comes with a short ratio gearbox, ensuring an ample supply of torque across the rev range. It gets two riding modes, ABS, and all the other standard bells and whistles expected from a motorcycle in its range. All this works really well on the tarmac, and I had quite a bit of fun with it on the highways, but that is not what this story is about.

Now for a quick flashback, the last time I had been to Panshet was in September, for the POE, and there was this particular part of the trail that led down to the water, which I had skipped because a few people had gotten stranded, owing, of course, to the treacherous nature of the trail. I was told that the place was beautiful, and the trail had now been modified for easier access, so I decided why not? I mean, what’s the worst that could happen?

So we gathered our stuff, grabbed a tent, and made our way down on the Tiger Sport to the water’s edge. The bike kept its composure all the way down, and even seemed pretty nimble on the trail. The brakes were very responsive and that was quite confidence-inducing, considering that we were hitting the trail with road tyres. Not my brightest idea, but that’s the whole point of this exercise. 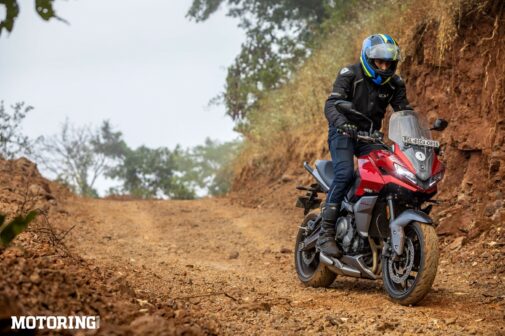 Upon reaching the bottom, we set up camp and took in all the sights and sounds. The morning mist was just starting to lift as the slight warmth from the rising sun fell upon us. Looking at the Tiger Sport with that backdrop, something just clicked, like it was meant to be there — it looked like it was in its element. I managed to clamber up a nearby tree for a better view across the calm waters, and the scenery didn’t disappoint in the least (reminder to self; climb trees more often, the view is always better).

Once we had our fill of the fresh air, and the peace and quiet of our campsite, we decided that it was time to pack up and head back. Now, came the true test of the Tiger Sport’s capabilities, as well as mine. As easy as it was coming down, getting back up was going to be a real task. All the torque from the three-cylinder engine was to be called upon to get us out of there. So, we lowered the tyre pressures a little bit, and slowly made our way upwards. 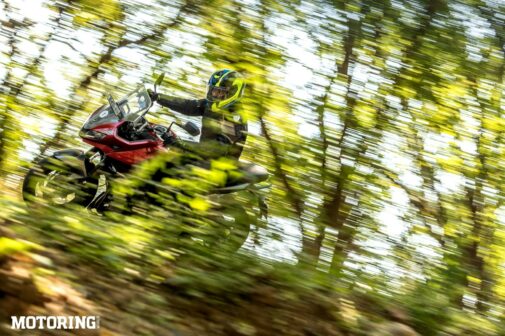 The route had quite a few steep inclines and patches of loose earth where traction seemed to be a scarce commodity. Nevertheless, we doubled down and pushed forward since there actually was nowhere else to go but up. Oddly enough, there were certain instances where I felt the power die out, and there was only minimal response from the throttle. This happened a few times before it went back to its fierce, butch nature, and it finally managed to secure just enough traction to get us out of there. 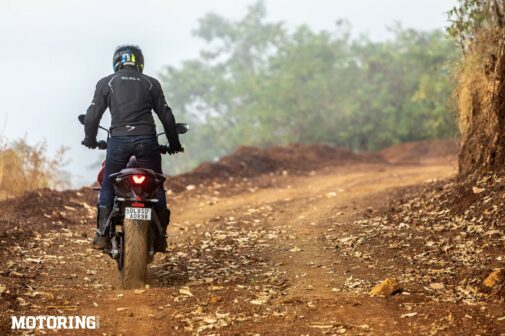 Upon reaching the top of the trail, I realised that there were a few things that I learned from this exercise. The first is that the Tiger Sport 660 is a very capable vehicle, and can fare very well off the beaten track, too. Secondly, while the Michelin Road 5 tyres are great on tarmac, it would be wise to invest in a good pair of dual-purpose tyres, if the plan is to take it off-road on a regular basis. The last thing is that sometimes all it takes is a wild idea and a whole lot of commitment to pull it off. At the end of the day, the Tiger Sport 660 managed to meet our expectations and is reassuringly more than capable of a little monkey business from time to time.