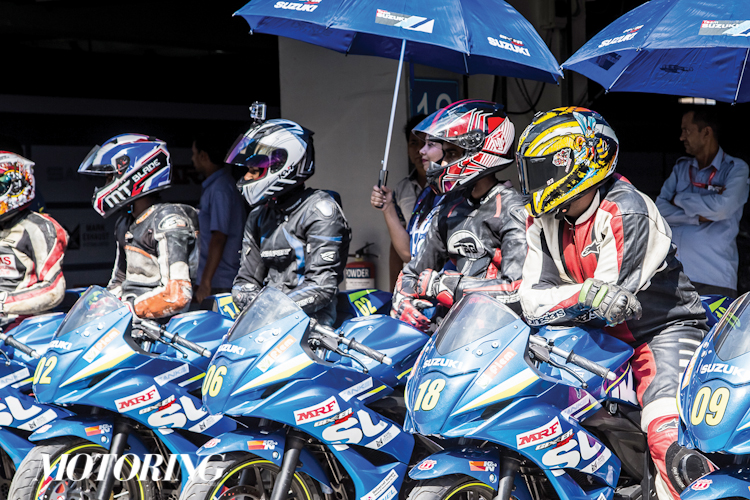 What is it about racing that is so human? Why is competition so instinctive to us? Why is speed an insatiable quest? I never seem to be able to answer these questions no matter how hard I try. It’s something that escapes my limited vocabulary despite having lived and experienced it, to howsoever small an extent. It’s something my body performs to, on call, but I just cannot put it to words. On that ‘number 18’ motorcycle, all I could tell myself to do was, ‘Push. Stay on it. Don’t crash.’ It’s beyond explanation — or justification, at least — but it just has to be done.

WHY DO IT AT ALL?
You, the reader, deserve better than to hear from someone who finds his ground towards the tail end of the starting grid (and the finishing order, I must add). However, there is one common thread that links everyone across the grid positions — that of wanting to outdo, excel, go faster. Every single time. The neck struggles to hold up, eyeballs strain to look any further. The rear tyre does things you don’t want it to and it only gets worse when the front starts doing the same. Between the motorcycle ahead and you, however, lies a desire. You want to do everything to reach out to it, to be like your heroes. Those men hailed by millions of fans. Things you are not capable of. Things you think you are not capable of.

‘Racing is all about a clash of egos. You want to win and you just want to be better than everyone else around you’

IS IT WORTH IT?
It’s in the chase for this very spectacular emotion that I found myself back in the Suzuki Gixxer Cup pits, having missed all of this year’s races except the first. The venue for the sixth and final round is the Buddh International Circuit — no less — and the odds, as ever, are against me. I’m used to it by now, but not any less offended or guilty. Peculiar choice of words, you think? Well, the former is simply because this is an unfamiliar track and also because I’m just not a dedicated racer like most of the others on the grid. The latter, because I’ve done absolutely nothing about getting fit, despite the writing having been on the wall for the longest time. All I can do is be mentally strong and try. It’s worth it, I suppose.

‘You’re constantly competing with yourself. You have to be physically, mentally fit to do it. But more than that, you have to want to do it  badly enough’

Nineteen riders head out of the Suzuki paddock as the Friday afternoon sun hangs around overhead, providing hardly any respite. We’re to lap the short loop of the BIC over the next thirty minutes of practice — that’s half an hour of figuring the bike out, trying to analyse the best settings and, of course, memorising braking reference markers and entry points for six corners. Easier said than done, but the bike seems to make it easy. I remember my way around the gearbox and the bike’s instantly flickable, too. It’s just a matter of getting the lines right — and not cooking it, more importantly. Thirty minutes of trying to find the lines later, the session’s over. I’ve clocked a 1.52.095 — eighteenth fastest. Or second last, if that sounds better.

The first three laps are a mess — I’ve entered C1 way too hot and run off the track, barely managing to stay on the bike. I’ve only got a few more runs left and I have to do all I can to make it work. I feel more tired than usual even though it’s a really short session and manage to put in just about one decent lap. It’s no good. I’ve qualified last, having gone slower than in practice even: 1.52.592. Do I even belong here?

‘Being here is good for the Indian racer because he’s directly under the umbrella of a manufacturer. It’s the best way to get noticed and picked up. It worked for me when I started racing’

Eyes focusing hard on the lights — I remember having messed up a start from my first outing this season — I dump the clutch. Everyone’s going ahead much quicker than I am and before I even cross the start line, I know this isn’t going to be easy. I crouch like I’ve never crouched before and dare to brake later than I’ve dared so far. It’s a chance I’m willing to take and it pays off. Knee firmly down on the tarmac, I’ve made it past C1 and — thankfully — I’m still with the bunch. It’s a bit chaotic at C3 since the ideal racing line is no longer available, having been occupied by five other riders, but I make my first pass here. It’s a  good feeling.

I carry a 7-kph disadvantage over other riders down the back straight, but if I brake later, much later, than them (and not wipe out!), I might be able to pass another one. The front tyre squirms under the force, rear lightening up, my right leg way off the pegs trying to shed speed. It works. Two overtakes within the first two laps is not such a bad thing and there are eight more to go. A couple of riders crash out over the next few laps and this means I’m up to 15th. There’s nowhere to go from here, unfortunately, as the bunch ahead has shot off way too much into the distance. I’m out of time and talent to do anything about it. Fifteenth it is, with one more race to go the next day.

I’m always fascinated by things the mind is capable of. The little things we tell ourselves to serve as the crutches of motivation. Even in a sea of despair, the mind finds trick after trick to keep you going and that only amplifies on a racetrack. I’ve lost a dear friend in a motorcycle accident this very morning and heading to the racetrack seems outrageous, but something tells me to go ahead. I feel restless and calm, all at once. Fear lingers around, but I make it a point to not say it out aloud. Submission is half the battle lost, no? The insides of my helmet are a lot quieter today, but I seem less affected, less intimidated, by the others around me.

If I could do it yesterday, I can do it today and just as this thought settles in, the lights go off. The start isn’t even my best yet (which is saying something), but by now I’ve figured my way around the track a little bit better so I can try sillier things. Somehow, it works in my favour. I’ve made the due passes, this time a bit wilder, but I just want to get ahead very, very badly. I indulge myself in a fight for 14th but make a big mistake and lose that opportunity. Still, I’m comfortably 15th — for the first time ever — and I’ve gone faster than ever before around this track. Counts for something, I suppose, especially since I made every attempt to push, stay on it and not crash.

‘To be the best, look where you’re going. Get a sense of space around yourself. Be fast, be disciplined, but enjoy it, more than anything else’

IN HINDSIGHT
The results may have been less than appealing, but I think I got what I wanted out of this experience. It’s healthy to keep reminding yourself that competition – as human a quality as anything else – is something you are capable of, no matter what the odds may be. Meeting Kevin Schwantz, 1993 500cc world champion, and from whom I’ve borrowed the above quotes, only reaffirmed my faith in the fact that racing is the stuff of legends. As long as you’re on a motorcycle, you have every chance of doing something extraordinary. Doing something you can’t do. Doing something you think you can’t do.