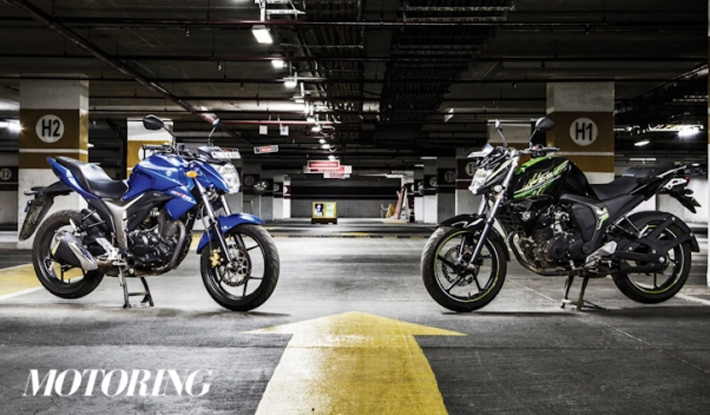 They say you can never have too much of a good thing. But you can have two much of a good thing – which is never a bad thing. The Yamaha FZ has pretty much been the class act of the air-cooled 150cc school of thought in India since it arrived six years ago, and this year’s fuel-injected refresh aims to give second wind to Yamaha’s best-selling motorcycle. However, there is now a bright blue spanner in the tuning forks’ works in the form of the Suzuki Gixxer. And it’s a pretty big spanner, too.

These two motorcycles are two sides of the same 150cc coin. A look at the spec sheets of both bikes could well convince you that you’re suffering from double vision. I had to check them twice which made it worse. The near-identical nature of these two motorcycles is evident by their similar front-fork diameters, identical tyre sizes, matching fuel-tank capacity, all wrapped in streetfighter-ised commuter packages. It’s like they’re twins separated at birth, one brought up in Iwata, the other raised in Hamamatsu. Both cities house the respective headquarters of Yamaha and Suzuki, and happen to find themselves placed in the Shizuoka prefecture in Japan. What’s that, now? Another similarity?

When these two meet for the first time, it’s like a moment from a cheesy twin-meeting movie scene. After the obligatory double take, they regard each other with heavy emotion, letting the sudden sense of similarity sink in. You almost miss the two halves of the cliched medallion.

The FZ, present here in the S version, has become much more busy-looking in its Version 2.0 avatar; some parts of it almost look a bit too contrived. Making matters worse is the fact that its wheels remain the same – come on, Yamaha, you could’ve made new wheels for it after six years! It gets a new meter console, yes, but it’s outdone in matters of the LCD by the unit on the Gixxer. The meter console (should be ‘meter screen’, actually) is the only place where bikes of this kind can have more ‘features’ than their peers, seeing as they’re all built with price tags in mind.

The Gixxer’s screen, in addition to being plain better looking than the FZ’s unit, tells you what gear you’re in, has two trip meters against the FZ’s singular one, and also features a clock to let me know exactly what time I stopped caring about time when I’m on a motorcycle. Another reason why I think the FZ looks a bit overdone is that the Gixxer looks so much smoother and wholesome. There’s not a thing on the bike (except the extra plastic on the rear splatter-guard that comes right off) that looks like it doesn’t belong there. Not very twin-like, eh?

The FZ, as mentioned earlier, gets fuel-injection, more for matters of fuel consumption that anything else. The Gixxer, as I neglected to mention earlier, gets a carburettor, more for matters of saving costs, I presume. Now, the Gixxer produces around 1.7 bhp more, but is also 3 kg heavier than the FZ according to the spec sheets. I suffer from terminal mathematical uselessness, so I can’t really tell you whether that difference should mean anything, but I can tell you one thing – the Gixxer is way quicker than the FZ.

The Gixxer has the quicker and faster motor here – there’s no way to beat more power, is there? It’s also smoother than the FZ’s motor which can be a bit buzzy at high rpm. Both have enough power to streak past traffic, just that the Gixxer will be ahead of the FZ all the time. Going down the same slope, the Gixxer will show you a nice-looking ‘125’ on the speedo, while the FZ can only manage a ‘115’. On a level road, though, both struggle to get past 110 kph. The sweet spot, seeing as these aren’t high-rpm, liquid-cooled motors, is between 80-90 kph, and both will sit between these numbers all day long. But we won’t.

Also, these are our everyday bikes, used for 80-km commutes, so fuel efficiency is something our wallets keep an eye on. And here’s where irony strikes again – the FI-enabled FZ returns around 45 kpl, while the carb-running Gixxer nudges the mid-50s. It’s as if the laws of physics and internal combustion don’t apply anymore, turning the FZ into the lesser of two equals.

Here’s what these two bikes are all about – handling. Both bikes feature riding positions that belong in the ‘sporty upright’ category, though I prefer the Suzuki’s marginally more natural reach to the ‘bars. Another similarity – as if we didn’t have enough already – is how your right heel rests on the exhaust can on both bikes, if you sit with your toes on the pegs. Kind of makes me wish there was another exhaust on the left side, too.

Anyway, both the FZ and the Gixxer are bikes that love to first gain as much momentum as they can – and then hang on to it with everything they’ve got. And what they’ve got is pretty similar cycle parts. When it comes to handling, there really isn’t much between the two, except that the Gixxer feels lighter than the FZ despite being heavier. Again, the irony. Both bikes attack corners much like piranhas would attack innocent toes dipped into their waters. Riding these two together on a twisting road is probably the most fun thing you can do in Indian 150cc motorcycling. But here again, it’s the Gixxer that has the edge.

I can’t quite put my finger on it, but the Gixxer feels friendlier than the FZ in corners which is saying something. Perhaps it’s because the FZ’s seat – though roomier than the Gixxer’s – is a bit on the harder side, as is its ride quality. The Gixxer is a bit more plush which makes you more comfortable, leaving your backside free to gauge cornering clearance rather than bothering with the next pothole. You see where this is going yet?

The Yamaha is still a great motorcycle and the Suzuki is more than just a copy/paste job. They’re similar in so many ways, yet as different as a blue apple and a black orange. But when it comes to delivering the goods of riding fun, the Gixxer is that little bit better. The Suzuki has a little more of everything – at around Rs 6000 less than the FZ-S or Rs 4000 less than the FZ FI. There’s no escaping the truth that while the FZ’s had a great run so far, it’s the Gixxer’s turn to take over as the best 150cc streetfighting commuter you can buy. That seals the deal in the Gixxer’s favour in anyone’s book – unless you’re a hardcore Yamaha fan, that is. The good thing is, there’s no evil twin here.