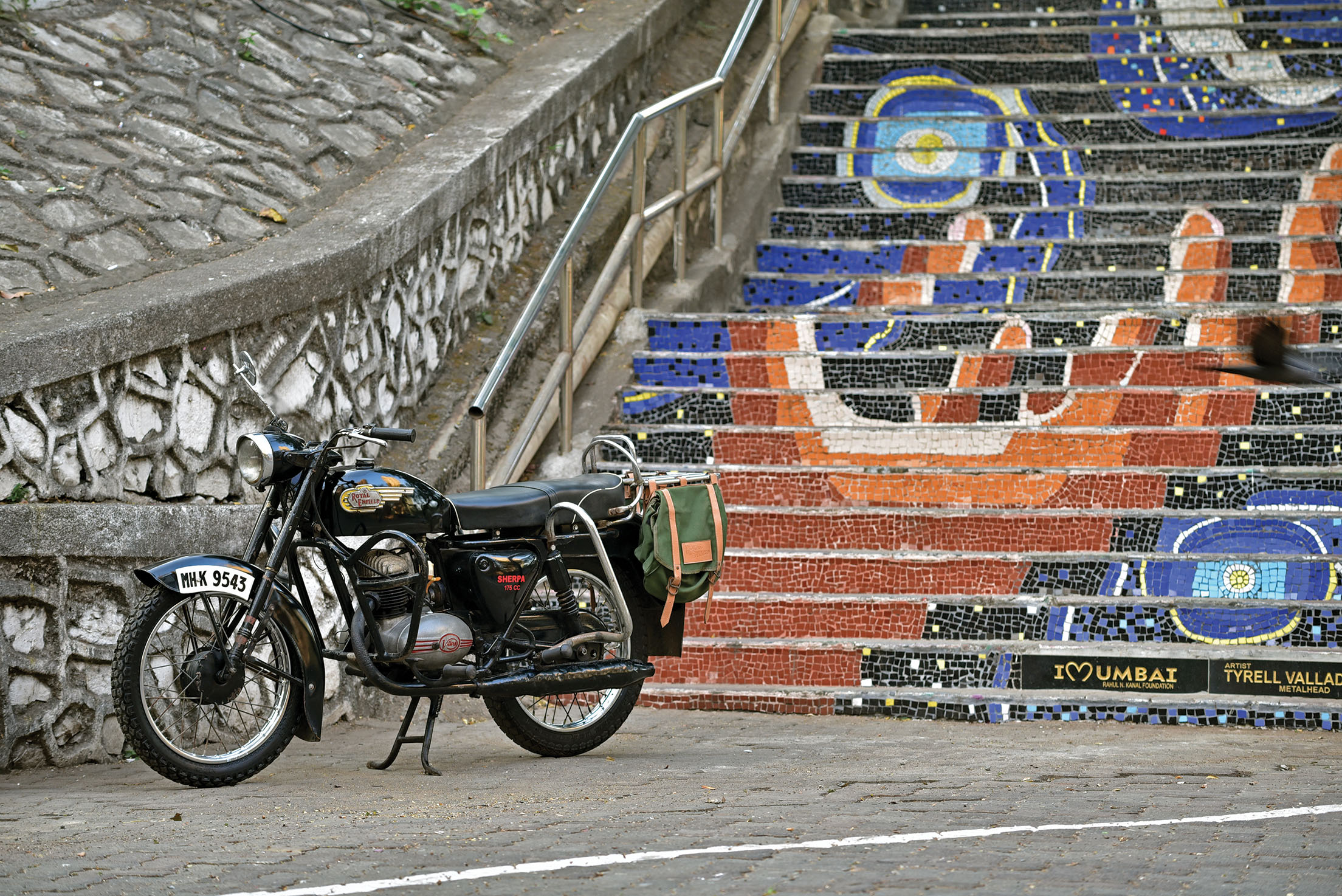 It’s six in the morning on a crisp Monday morning. Mumbai has woken up from its short yet deep slumber. The birds are chirping and men on bicycles are pedalling furiously this way and that, out to deliver milk, bread and the tripe that now passes for news in the papers. Suresh, our amazing photographer friend who seems to grow younger with age, and Yusuf, who very graciously got out of his cosy bed so early in the morning, wait for me to arrive.

I finally do roll up, late by a whole hour. All credit for my tardiness goes to a so-called reliable automatic scooter made by a Japanese company who I shall not name, which decided to come to a dead stop in the middle of the road at a point which was exactly equidistant from my house and the meeting point that the other two gentlemen were patiently awaiting my arrival.

After making a few calls, my friend and fellow old bike aficionado, Suraj comes to my rescue on my old Bullet which is absolutely filthy all thanks to standing out unattended for three months. Having towed the scooter back home, I head to the shoot, ferried by a motorcycle that has been labelled as ‘unreliable’ by every expert who hasn’t actually owned one. But I digress…

We chose the steepest hill we could find for this machine, simply because anything else would just a molehill for an old two stroke Royal Enfield with such a grand name. Yes, as corny as it may sound, we did a small hill climb with the Sherpa — this particular specimen having rolled off the production line in 1969 — and we were really amazed with how zesty this machine was!

We did a short recce before the shoot and the hill climb actually began. Although displacing twice the cc as the 175cc Sherpa, my Bullet, albeit ferrying me and Suresh, made it to the top in first gear. I turned green with envy as I saw Yusuf going through the gears on his Sherpa, leaving us behind lumbering along in a cloud of sweet smelling blue smoke.

Having owned a Crusader in the past and having regrettably sold it a few years ago, I was eager to ride the Sherpa and rekindle fond memories. Although the Crusader was launched after the Sherpa, it was essentially the same motorcycle with a few changes to the aesthetics. Power for both bikes comes from a 173cc Villiers two-stroke single 2L series motor. Unlike the other 175cc two-stroke — the Rajdoot — that was the competition at the time, the Sherpa boasted of four gears, one more than the Earls forked Polish clone.

I kick the Sherpa and the motor comes to life immediately. As with most British motorcycles, the gearshifter of this unit constructed motor is on the right side and jabbing it upwards engages the first cog. I release the clutch and the Sherpa jolts forward, as if eager to flatten this hill.

I keep the throttle wound back all the way, and each of the four gearshifts are positive and butter smooth. Heck, they’d put a lot of modern motorcycles to shame. The engine pulls strongly and despite the gradient of the road we’re on, the Sherpa is shuffling the both of us along at quite the pace. Period literature from the company claims that the Sherpa is good for 95 kph and with the way this one is pulling up the steep gradient, I’d say that figure is pretty much in the ball park.

By now, pretty much everybody in the area is awake, and if they weren’t, they certainly would have been roused from their slumber by the staccato two-stroke beat that the Sherpa is letting loose as we keep going. The first corner approaches rather rapidly, and I drop a gear and pick a line. The tyres, brand new and hardly scuffed off of their sheen, begin to wash out on the pathetic paver block surface of the road. I gas it all the way, remembering in blind panic what someone once told me about winding the throttle all the way to the stop when in doubt. In retrospect, that advice was probably in relation to something completely unrelated, but somehow, the tyres suddenly grip the road, the bike shimmies back in line and we’re both out of the corner safe and sound.

By now, I’m getting used to the motorcycle. The chassis is nice and taut, light in weight as it may be. Front forks are Dowty numbers from the preceding Ensign and the rear shocks are from the Bullet. The tool boxes and the mudguards look disproportionately large for the otherwise petite Sherpa, but that’s only because they are in fact from the Bullet as well. This isn’t surprising when one realises that the Sherpa was in fact a parts bin special and that was because it was built to a price with minimal investment.

You see, Royal Enfield was eager to bag young riders with lower displacement two-stroke motorcycles and retain them as they progressed to bigger machines. Till they culminated with the Bullet, which was for the longest time, the most expensive motorcycle manufactured in the country. The company launched a plethora of 150cc two-strokers like the Ensign and the Prince with varying success. When the Sherpa was launched, it was basically a motorcycle for riders who wanted more power than what the 150s provided but couldn’t afford the higher displacement motorcycles, or may be even found them to be a tad too intimidating.

The Sherpa was supposed to be the steed for the working man, with this particular one having been used for several years by a doctor to do his rounds on. Yusuf was lucky to get it into his own garage ten years ago and he reckons that he hasn’t spent more than six thousand rupees for its up keep in all that time. And most of that amount was spent to get it painted and dolled up. Despite its age and the low up keep costs, the Sherpa still sings its swan song every time its kick lever is prodded and it goes about doing whatever is asked of it without any protest or drama.

Which is more than what I can say for that so-called reliable modern automatic scooter from Japan. 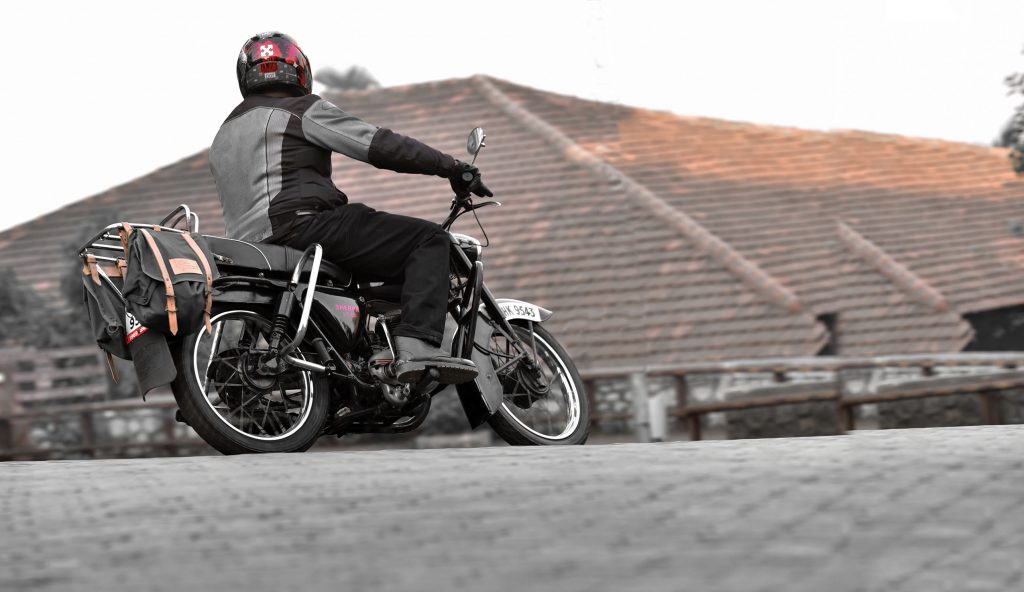