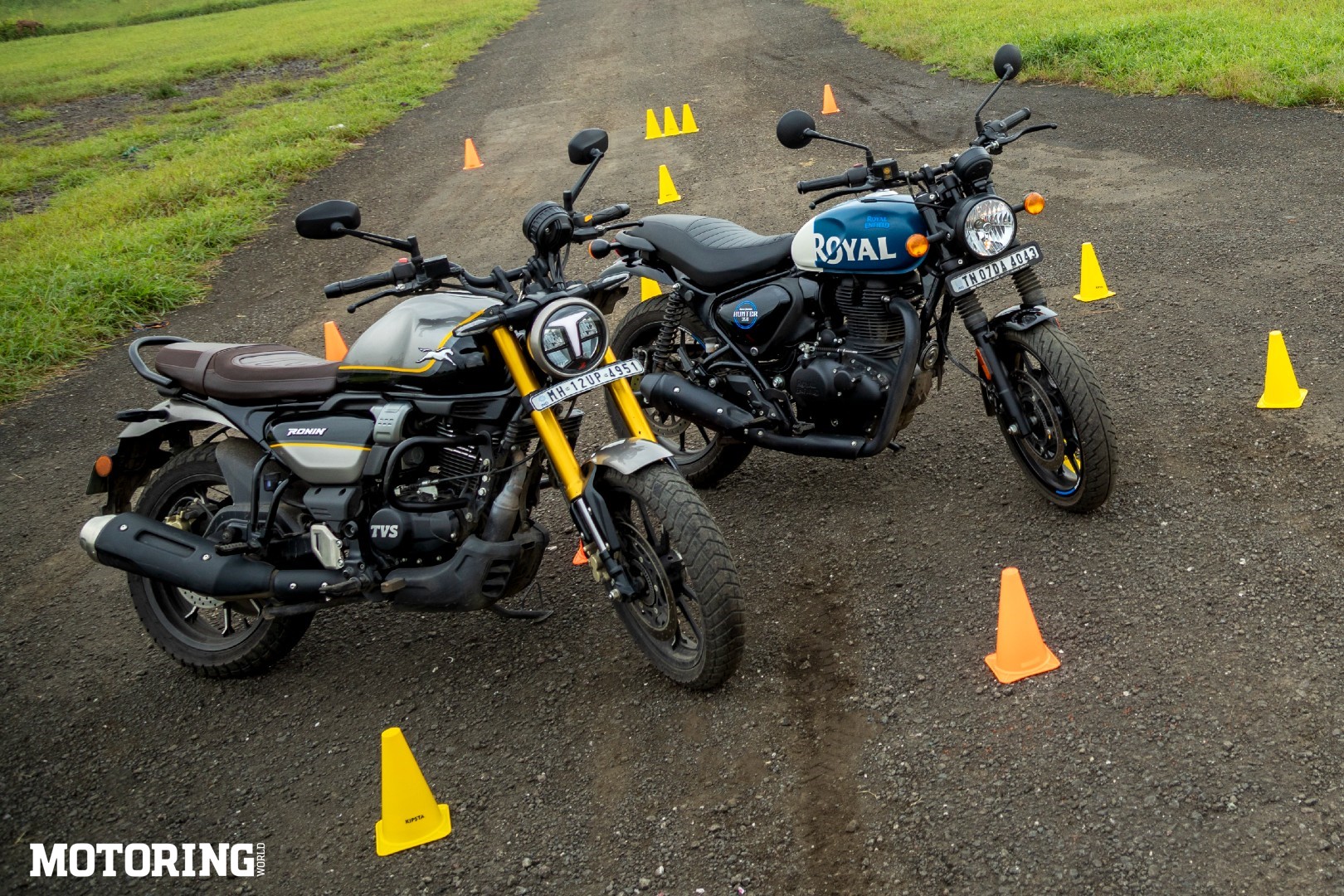 For those unfamiliar with the world of moto gymkhana, let me assure you, it isn’t that complicated or hard to follow. It is a time-trial sport in which riders compete to manoeuvre through a fairly technical course outlined by cones, to test an individual’s riding skills, as well as control over their motorcycle. Originating in Japan around 50 years ago, the sport of moto gymkhana has slowly, but steadily, been spreading across the world. 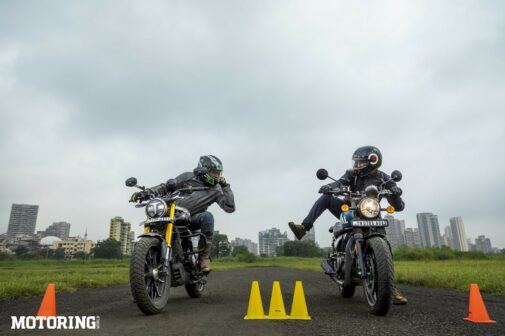 Generally, all it takes is an empty parking lot, a few marking cones, a motorcycle, and a decently skilled rider. Sure, it helps to have a motorcycle that is well-balanced and capable of sure, sharp manoeuvring. And how does one go about finding out how capable a motorcycle is? By putting it to the test, of course.

That is exactly what we did with the Royal Enfield Hunter and the TVS Ronin, as Janak and I went head-to-head on the course. The layout of the course was fairly straightforward, consisting of a slalom, tight circles along the way, a precision pass, and a figure of eight. We also had to include a 100-metre dash, as well as a slow race for full effect. Time penalties were also set for putting a foot down, knocking down a cone, or stalling the vehicle. 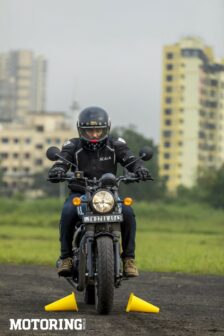 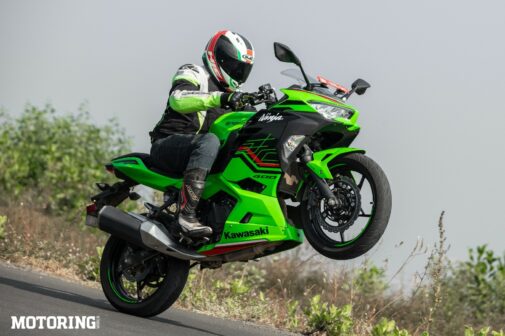 Coming to the decision of who got to ride what, I proposed that it would only be fair to toss a coin, the winner being awarded the choice. Janak won, and chose to ride the Ronin, leaving me astride the Hunter. One would think Janak’s choice to be the smarter one, given the smoother short-geared engine, but I knew that ultimately, the winner would be decided not by the machine, but by skill (pause for dramatic effect).

The Hunter sure is a handsome vehicle, living up to the standards of Royal Enfield. The roadster setup, and a comfortably aggressive riding triangle, make for a pretty decent ride. The 349cc air-cooled engine that is shared with the Classic and the Meteor is peppy, and has loads of low-end torque. And while the suspension may be on the stiffer side, it feels pretty well sorted. 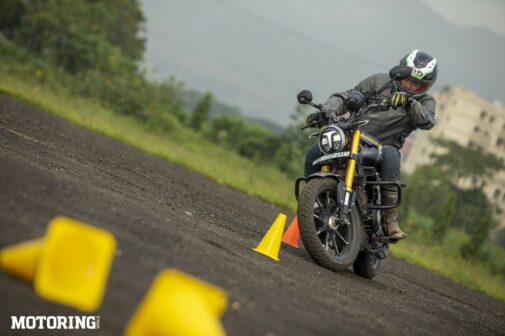 The Ronin on the other hand does look a bit confused, with maybe a bit of an identity crisis on its hands, but it does have a premium appeal to it. The 225cc engine is pretty refined and manages to deliver quite a bit of power to the rear wheel. The riding ergonomics are slightly more relaxed, and it does have the added factor of a lighter slip/assist clutch rendering the bike very wheelie-happy.

In terms of specifications, both the Hunter and the Ronin match up pretty decently, with a few exceptions here and there. Both motorcycles excel within urban confines, and have engines that offer ample amounts of low-end performance. Going by what was just stated, they both should fare pretty well on the course, so let’s get down to business (loosely translated into fun). 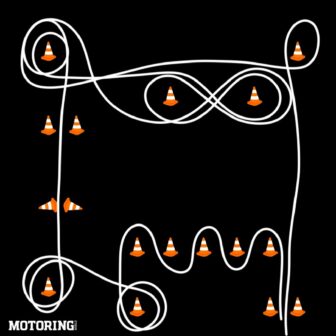 THE OGRE
Upon finalising the course layout, I realised that the outline resembled that of an ogre’s mug, and now that picture is all that comes to mind. One starts at the Ogre’s chin and progresses to weave through its teeth at the Floss zone. Then comes the Beast’s Warts, where one has to make two tight concentric turns on each cone to test the turning radius, before shooting through a precision pass onto the next set of concentric turns, at what I call the Windmill. The rider then moves on to the Cross-eyed Stare, which is a figure of eight, twice round before returning for one more swivel around the Windmill. The next part is where one gets a feel for the vehicle’s acceleration and braking efficiency, before going into the Slingshot. From this point, one can basically pin the throttle to hurtle past the finish line.

I was the first to have a crack at the course with the hopes of setting a decent time to beat, lest it become too easy for my more experienced colleague. I shot off the start line and made a neat job of weaving through the Floss zone, onto the left-handed turn. The Hunter seemed planted and confident, so I pushed it a bit more. A quick dash through the precision pass just went to prove how sure-footed this machine was.

I must say, the turning radius on the Hunter is quite impressive, given the many tight concentric circles on the course, followed by the Crosseyed Stare. One does manage to get a proper feel for the motorcycle and its capabilities, to an extent. The Hunter breezed through the rest of the course and I ended up with quite a decent time of 01:30.09. 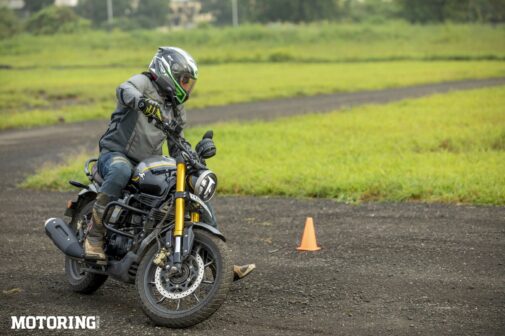 Janak set off next, with a very promising start and managed to weave through the Floss zone, but in a slight bout of over-enthusiasm, he leaned the bike a bit too eagerly into the Beast’s Warts. In an effort to keep the bike upright, he put a foot down, and even managed to stall the bike. A five-second penalty for each meant that he was now at a loss of 10 seconds.

My high-school maths teacher used to remark, ‘talented yes, but Keshav’s careless mistakes will be his downfall’. I am pretty happy that only applied to my maths, and didn’t carry over to my riding. The Ronin seemed at a slight disadvantage, owing to the wider rake angle on the front end. Learning from his mistakes, Janak proceeded to complete the course in a very dainty fashion. With no evident effort to make up for the lost time, he finished the course with a total time of 01:48.38. It was almost like he knew he would get an opportunity at redemption soon. 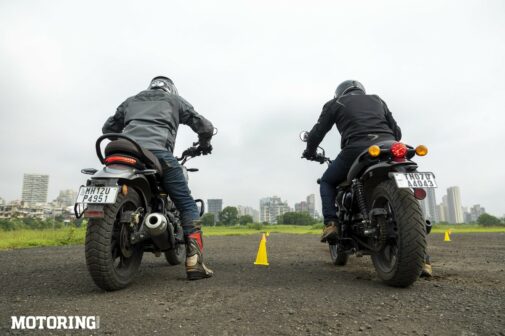 Up next was the 100-metre dash, and I saw a glint of mischief in Janak’s eyes as he revved his engine at the starting line and as we took off, I saw exactly why. The Ronin with its shorter gearing seemed more eager than the Hunter in terms of acceleration. We crossed the finish line with nearly a bike length difference between us. The scores were now even and Janak was back to his haughty self, eager for the next challenge. 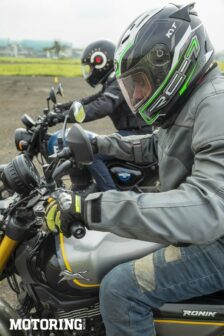 Now, the tie-breaker was a 9-metre slow race through a zigzagged path and putting a foot down or stalling the vehicle would result in an immediate win for the other party. Both of us were equally determined to beat the other (for bragging rights, of course) and one could feel the tension building up. A quick inspection of the track to see that both had a fair shot, and we were set for the final showdown.

Upon Kaizad’s mark, the both of us set off, gingerly applying the brakes and modulating the clutch with just enough throttle action to keep us from tumbling over. Time seemed to stand still as the bikes crawled across the winding path, each of us quickly monitoring the other’s progress lest one go further than the other. Luck was in my favour, as Janak lost balance not too far from the finish line, while I was still inching away to glory.

And just like that, the Hunter and I stood victorious as my less fortunate colleague astride the Ronin quietly bowed out. It was quite a fun experience and something I would look forward to bettering my skills at, considering that the whole idea behind it is to help develop one’s riding capabilities. 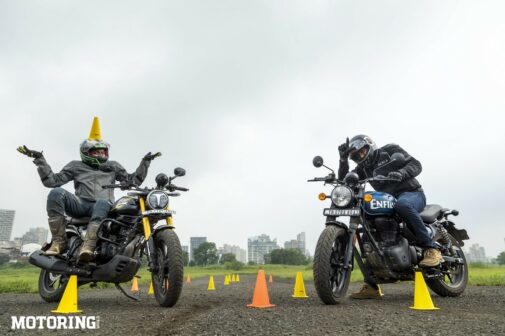 Taking the two motorcycles that we pitted against each other for this showdown, I am amazed at the individual capabilities of both. While the Ronin may look slightly outlandish, it tends to grow on you with that smooth engine from TVS. The Hunter itself sure seems to be living up to Royal Enfield’s new legacy of well-refined motorcycles. The two motorcycles fit into the same price bracket and are very good products, each with its own strength and character. Looking at both in that light, it all comes down to individual preferences as you cannot go wrong in choosing either one over the other. 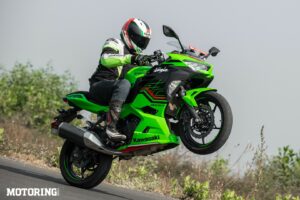