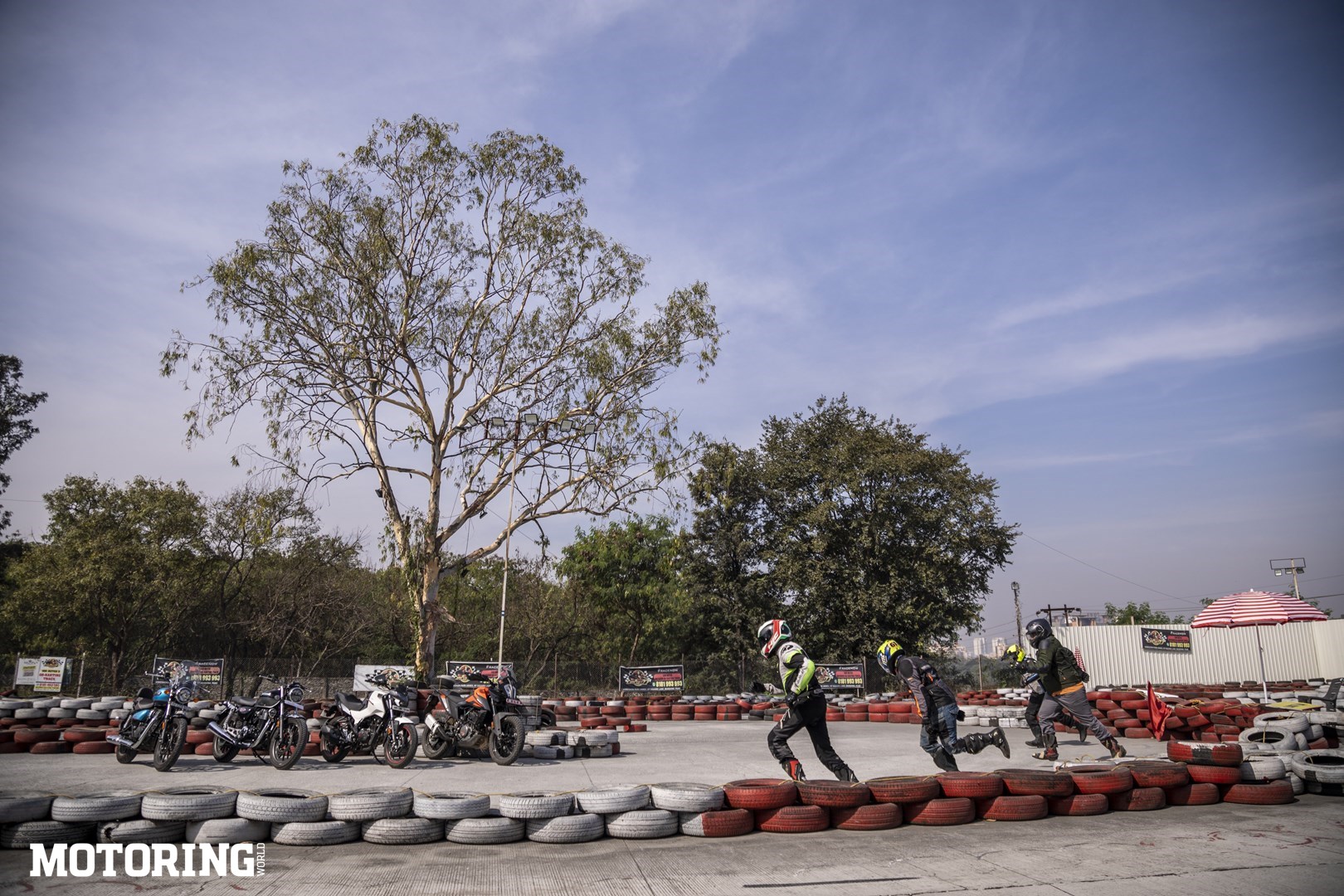 It does not matter which brand’s dealership you walk into, you will always find the newest motorcycle parked in a prominent spot, waiting to be bought and taken home. Given the variety of options, we’re spoilt for choice. So, we handpicked five of the hottest motorcycles of 2020 — each one the newest in its segment — for a day of scraping footpegs and scrubbing rubber around a go-kart track. If you haven’t noticed yet, I mentioned five motorcycles, but only four are present as the Husqvarna Svartpilen didn’t show up for the party. We didn’t have any less fun, though.

THE MACHINES
As much as we would have loved a bunch of supermotos here, something that we’ve been craving for as long as we can remember, we did end up with a good bunch of motorcycles. Each one has nothing to do with a track, of course. Starting with the Meteor, it’s the newest member of the RE family and the genesis of the brand’s future line of bikes. Next, we have with us her H’ness herself, the CB350 from the Honda, a steadfast regent marching against the rest. Then we’ve got the Xtreme 160R from Hero, the closest scion to the original CBZ and probably also the most capable one in this situation. And lastly, completing the quartet, is KTM’s 390 Adventure, a 390 Duke on stilts, and also the closest that we could come to having a supermoto. All the motorcycles you see here are bone stock. No modifications were allowed, which means each of these machines ran factory suspension and, most worryingly, road-spec tyres. However, the only thing that was decided was to lose the mirrors as they would only come in the way while cornering and slow us down. Yes, being optimistic is what we’ve been taught. 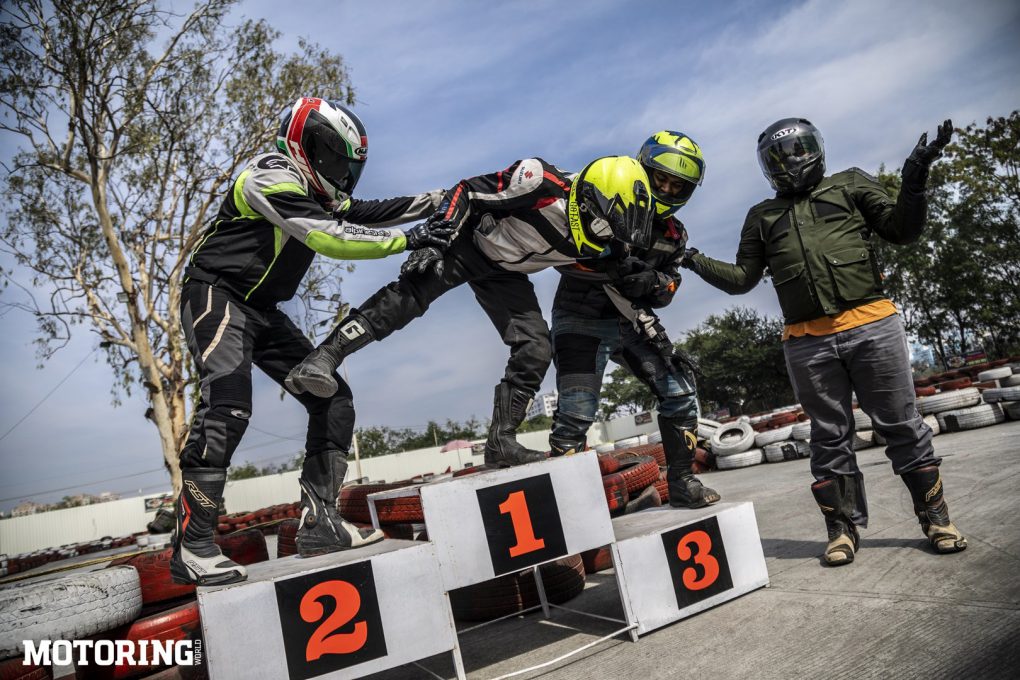 THE CREW
Given the limited availability of heads to ride these motorcycles around the corners of the track, it was all hands on deck. Varad, our go-fast guy, was quick to claim the KTM for himself. I guess it had something to do with the scooter that Kartik had enforced on him during the bike Slush Fest in 2020. Up next was Sangram, Varad’s sidekick and partner in crime, who had obliged to swap his usual adventure gear for a riding jacket and pants. He was handed the keys to the H’ness. Why? Some say he’s a descendant of a family of crowned heads. Aditya, our in-house car guy, who hadn’t been riding motorcycles for the longest time, was swiftly provided with the keys to the Xtreme 160R. Usually seen sporting a tee and shorts, he traded those for protective gear which he somehow managed to squeeze into for the day. As for me, I found myself thumbing the retro-styled starter knob on the Meteor. Being an RE, it was the heaviest of the four, which I accepted as my curse.

MAIN COURSE
The plan was simple — the fastest lap wins. But before that, here’s a quick run-down of the circuit. It was a 500-metre course, comprising 11 corners in total, seven right turns and four lefts. With five hairpins, it was quite a technical affair that demanded precision. Also, unlike other tracks that are paved using tarmac, this one was concrete, which meant the parting lines between two slabs had to be taken into consideration. While some intersected the corners perpendicularly, the others ran along the intended fast line. As the track was built for driving go-karts, the partings only added to the difficulty of the final target.

GET SET, GO!
After a couple of practice laps, it was time to get the stopwatch out. Saurabh, our web guy, had doubled as the timekeeper for the day. First up was the Xtreme 160R. Being re-acquainted with bikes after a long gap, Aditya had resorted to taking it easy. With a rather relaxed launch from the start-finish line, the Xtreme showed off its streetfighter eagerness and agility with its 17-inch wheels and short turning radius. It stuck to its lines and was brisk around apexes. Notably, the front brake line on the Hero probably had a bit of air left behind which made the brake bite soft. To compensate, a slight dabbing the rear brake was needed to not overshoot the corner. Being a coarse cement surface and the limited experience in riding overall, Aditya unintentionally ended up locking the rear around two corners which added a couple of ticks to his overall time of 1 minute 1 second.

Up next was the H’ness 350 on which Sangram seemed to be determined to clock a handsome time. Unfortunately, he mistook the pit lane exit for a corner and turned into it. A restart was called for, and this time the Honda could be seen tipping hard into the corners, while its significantly loud exhaust note made it feel even faster. The time clocked was 51.02 seconds, putting it above Hero’s streetfighter.

Next, it was the Meteor’s turn to carve its way through this maze of corners. With revs held at 2000-2500 rpm, I dumped the clutch which catapulted the RE ahead with enthusiasm. Although it is the heaviest, the majority of the Meteor’s weight is concentrated in the bottom half of the motorcycle. This meant flicking the bike around turns and scraping the feelers of the ’pegs at apexes. Having ridden on racetracks before probably helped me get around faster as by the time I crossed the finish line, I had managed to bag a healthy three-second lead over the Honda by clocking 47.56 seconds.

However, my joy for clocking the fastest time was short-lived. Before I could cherish my achievement, Varad was already lining up at the start line, dialling traction control off and switching the ABS to off-road mode; in other terms, this can be considered a supermoto mode. He was off to a blistering start and the KTM seemed to have forgotten that it was an adventure bike. Instead, all we could hear were power-sliding tyre-screeching sounds as Varad went ballistic on it. He even managed to lift the front wheel cementing his victory as he crossed the chequered flag. The time clocked was 45.69 seconds, a good two seconds faster than mine. 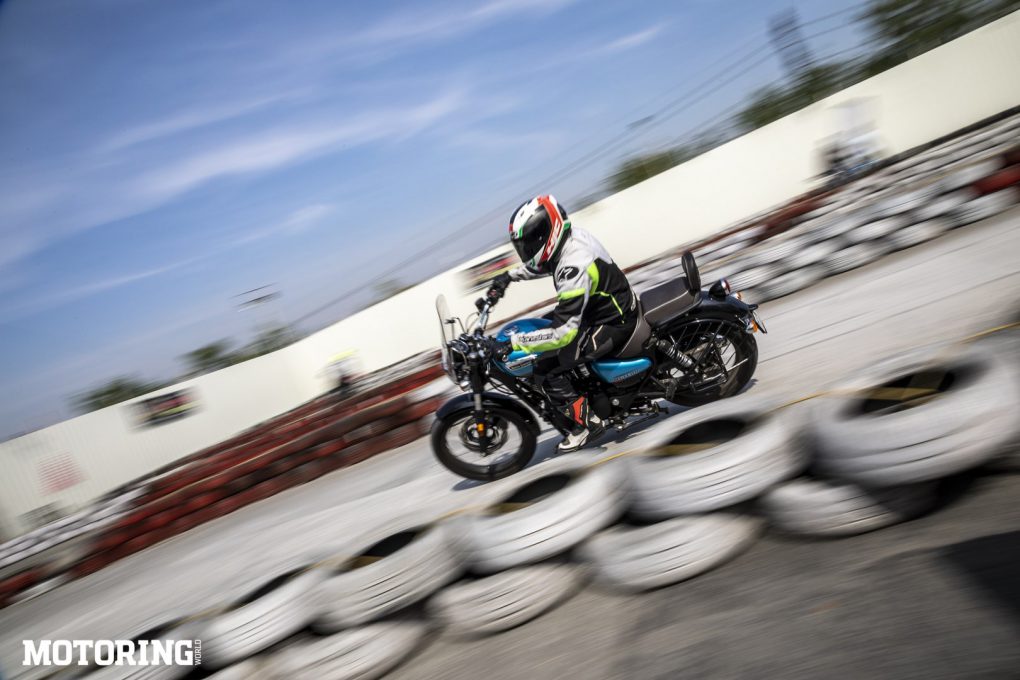 Jump To Conclusion
Looking at the time clocked by the competitors, the Adventure-focused KTM displayed its racing lineage well, even when it was out of its element. Varad celebrated his victory by popping a couple of wheelies and some stoppies, too. The Meteor turned out to be a surprise, with full marks for its manoeuvrability. The H’ness CB350 trailed slightly, but it’s no less of a capable motorcycle. While the Xtreme 160R might have finished last, knowing what that bike is capable of, I am sure in skilled hands, it would top the ranks, and if nothing else, give the KTM a run for its money. All in all, what mattered were the good laughs and the fun that can be had with these motorcycles. From a few close calls to near washouts, it only made everyone a better rider by the end. The way I see it, this event could very much be another annual subject of the Motoring curriculum. 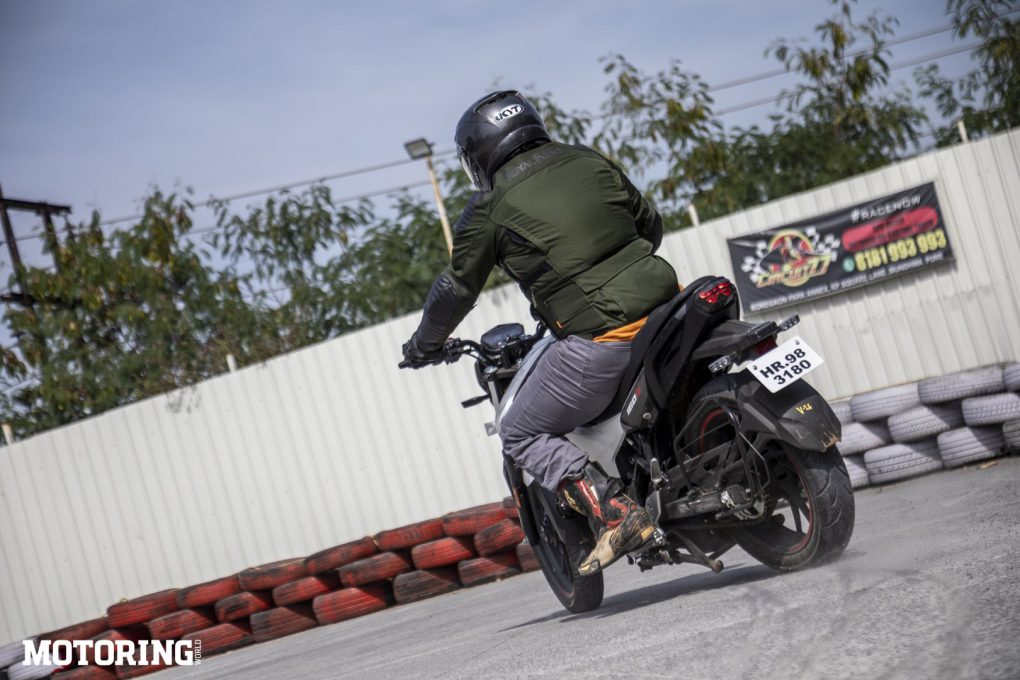 Misfits Parade
Before the morning of the race, I had never worn riding boots, so you can guess why I was feeling a little out of place in this group of riders. And standing among the other heavyweights, the svelte Xtreme 160R was definitely the odd one out as well. It makes sense, then, that we were paired together. On this narrow and twisty circuit, the Xtreme was the best companion I could have asked for. It was nimble and allowed me to make quick directional changes, which came in handy when I missed my braking point for a corner. It may be last on the timing charts because of my inexperience, but truth be told, the Xtreme might have topped the timing charts in the hands of anyone else.
– Aditya 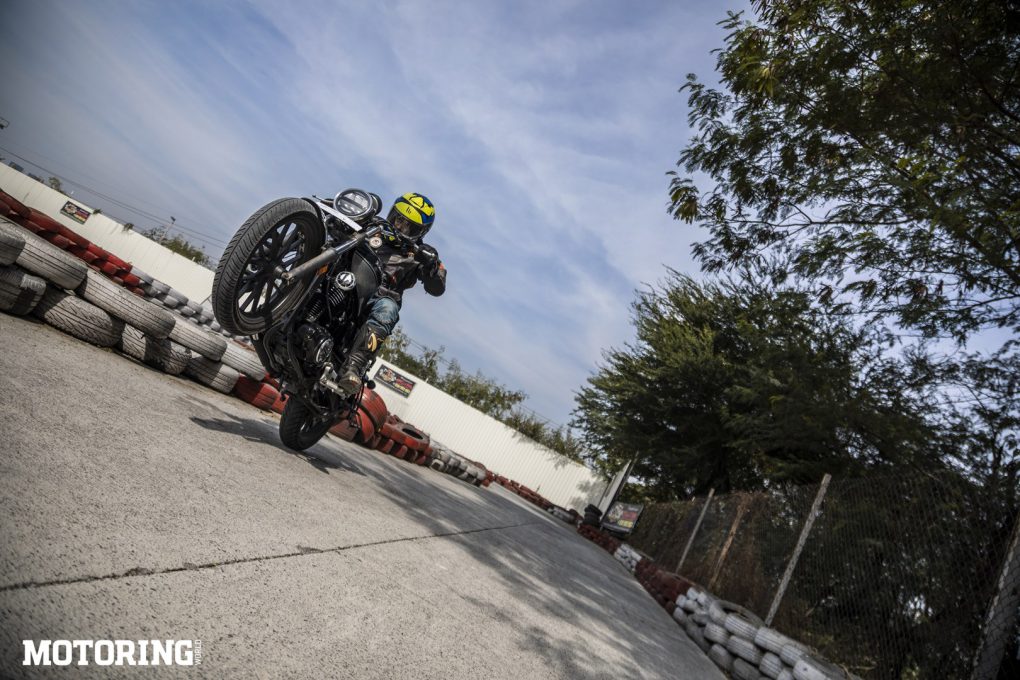 More like Lz’ness
Never expected to find my rear end lodged on the Honda H’ness on a go-kart track when the other options included a KTM 390 Adventure and the Hero Xtreme 160. But then as a guest rider, you’ve got to ride what you get the keys to. Also, it’s not exactly a dialogue with Varad when one tries to get on the KTM. Never mind. A few laps on the H’ness and I was convinced this is probably the most unlikely machine for the small track that we were riding on. The motor is super refined, but too easy-going for any kind of fun on corners. Of course, there’s a lot of peg-scraping fun that you can indulge in courtesy the supple chassis and suspension dynamics working in sync. I wish the Honda had a little more low-end grunt and slicker gearbox, for then I would be considerably ahead on the time sheets — from the top.
– Sangram 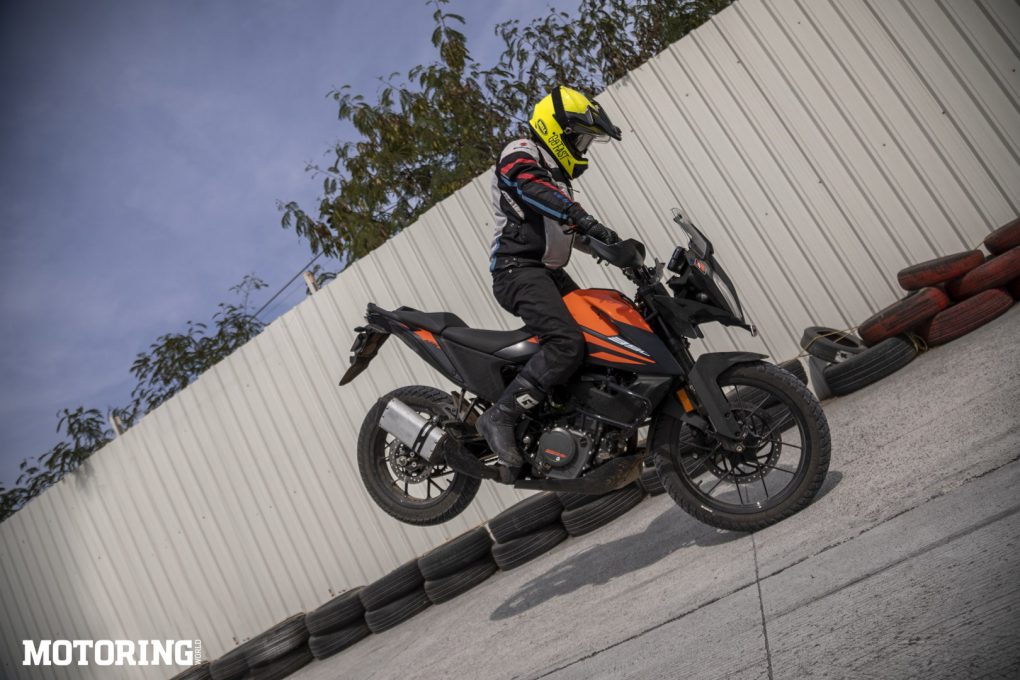 Supermoto Powers
Extra suspension travel, a punchy motor and a wide ’bar epitomise hooliganism like nothing else ever will. And the KTM 390 Adventure easily transforms from a do-it-all adventure machine to a track-focused supermoto monkey. All you have to do is change your seating posture from the conventional stand-up-and-ride to sitting down and going motocross style with the inside leg dangling out. The 390 Adventure drops into the tight bends and holds clean lines, pointing straight at the exit. It feels natural to slide into the corner and pop those (unintentional) wheelies. And the new MRF rubber only makes it easier to go sideways on a concrete go-kart track. Silver linings, we must have.
– Varad 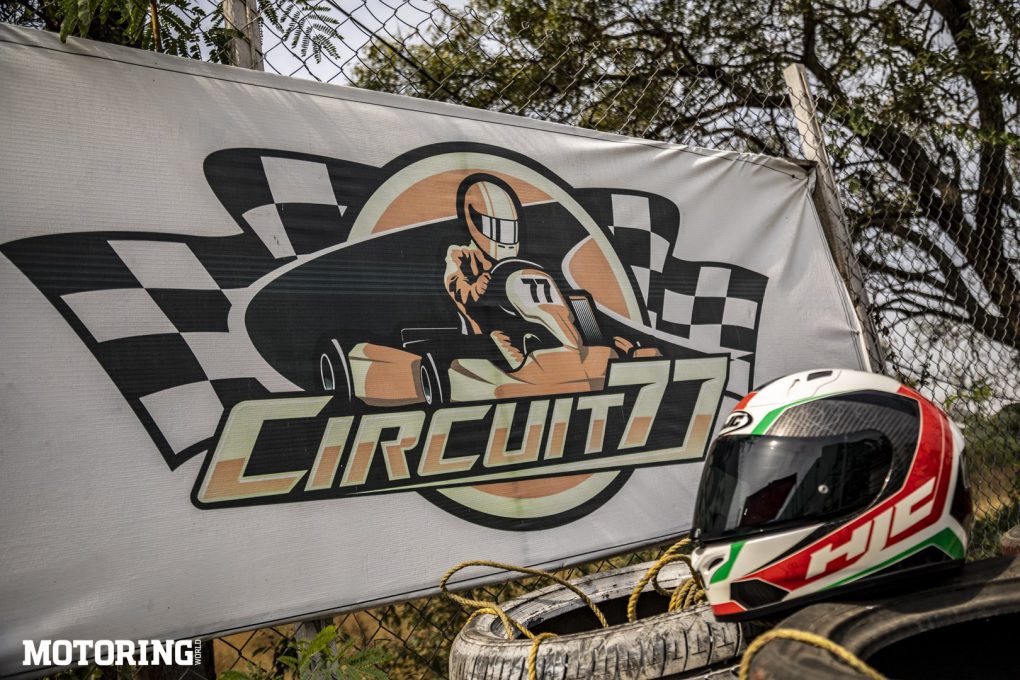