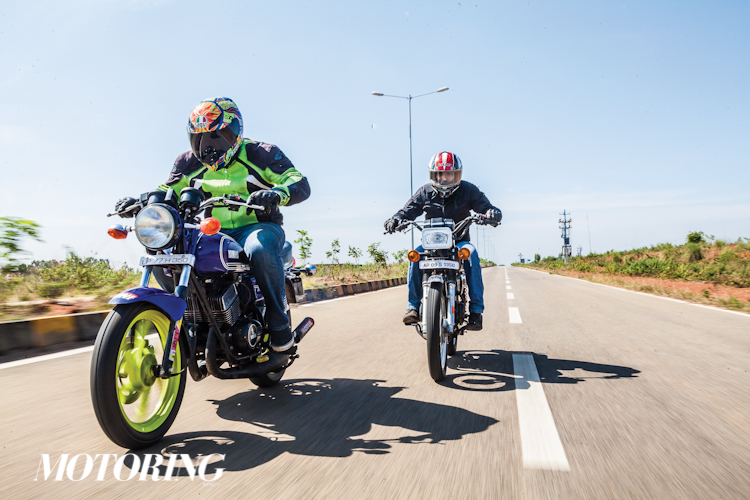 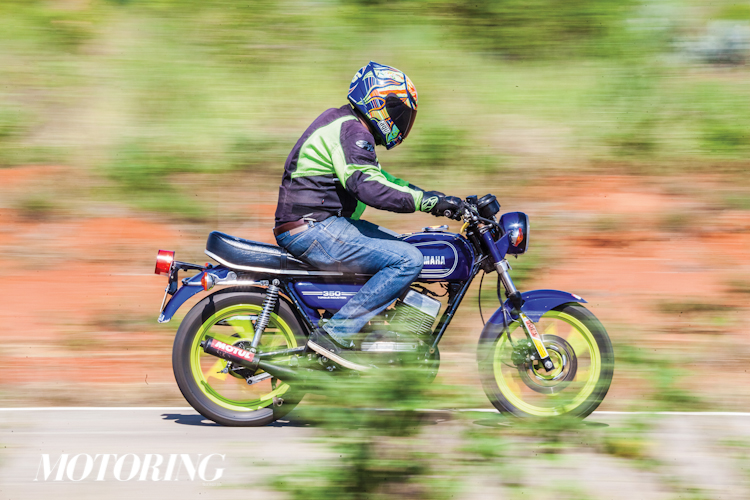 That which is dead can no longer evolve. It is the rule of nature. No man, vegetation or soap opera has escaped this ultimate truth except, going by recent sightings in the city of Bengaluru, two motorcycles born well before the advent of the new millennium. Keywords common to popular reports are ‘blue smoke’, ‘a loud shriek’ and ‘blurry visuals’. Cases of these sightings have been documented in other parts of the country, too. They’re rare and not easy to find, but the important thing is they’re still alive. Typical two-stroke behaviour, this. So quick, even time couldn’t catch up  with them. 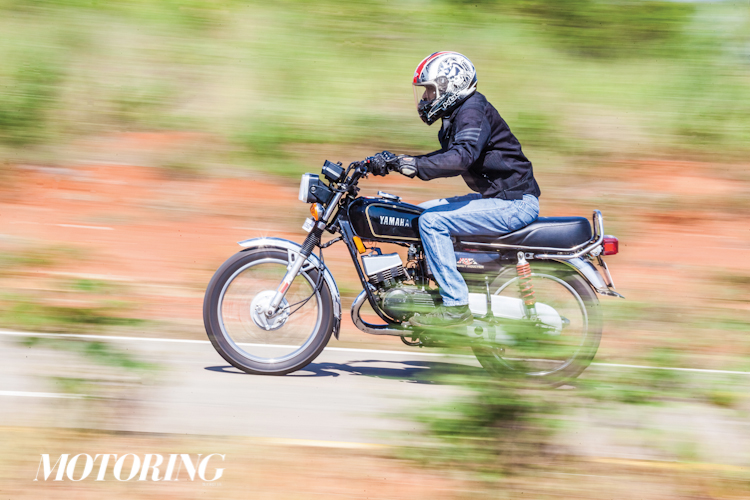 WAIT, WHAT?
While the four-stroke onslaught spelt the apocalypse for the two-stroke motorcycle, a small family of Yamahas planned a meticulous escape. They went into hiding for long, until legend lit a fire strong enough to bring about their revival. The men in suits who made them choose to look away today, but there does exist a noble class which, armed with tools, expertise and a quest for speed, has kept icons such as the Yamaha RD350 and RX135 alive and ticking. The RD and RX have been absolute icons around the world and more so in India which has spent an unreasonable number of winters deprived of motorcycling thrills. They were quick, they were not easy to tame and in the wrong hands, they proved disastrous. The good thing is, nothing has changed. 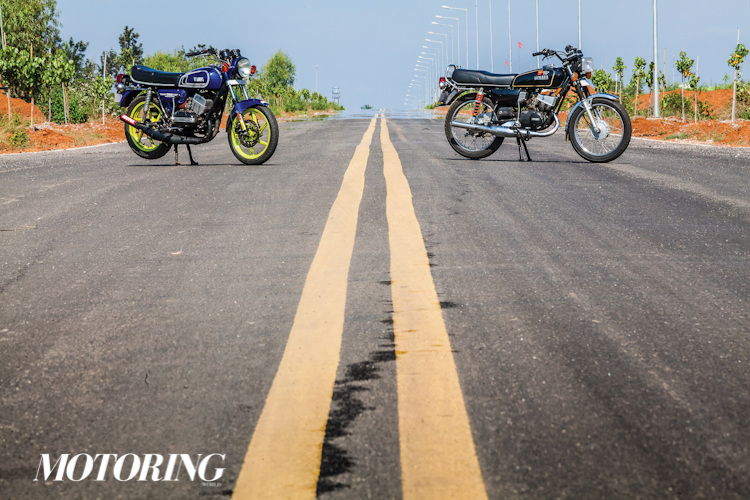 THEY MUST BE MOD!
Oh, you bet! The Yamaha RD350 you see here is a High Torque model, with all the goodness of the original number but with helpful modern bits to translate its thrills to a new generation of rider. A front end sourced from a Bajaj Pulsar, complete with a well-sprung fork and a disc brake, lightweight alloy wheels painted just the right shade of fluorescent yellow and meaty rubber that does full justice to the 40 or so horses that 349cc parallel-twin two-stroke produces. It also has a pair of perfectly crafted expansion chambers which act like amplifiers, not just in terms of sound effects but also in optimally channelising the flow of its power output. The FZ16-sourced handlebar is the last of the modern touches and the rest is  more or less the same iconic silhouette  of the ’80s.

The RX135, perhaps less revered than the RD, is more of a special number today. What it lacked in sheer horsepower, it made up for in the way of nimble handling, a peppy single-cylinder motor, an ability to wheelie into the horizon and, of course, its featherweight properties. This one’s more or less a sleeper, with the only visual giveaways being that chromed expansion chamber that wears its battle scars proudly. It’s the engine which is most insightfully tuned, however. Lots of power low down thanks to the black arts of carburetion and porting, a genuinely well-engineered respiratory (inlet and exhaust, in other words) setup and a lot of trials and errors have gone into making this RX135 more involving than any other single-cylinder motorcycle on sale in the country is.

ARE THEY QUICK, THEN?
These are the motorcycles that define the term ‘quick’, so your question is unnecessary. The RD350 is phenomenal right from the start in the way it accelerates. All right, so it takes a few thousand revs low down until it clears its throat, but once it does, it accelerates like nothing else can. It’s not so much the rate of acceleration than the sheer sensation of it. I’ve been lucky enough to ride superbikes that have been way, way quicker from, say, 0 to 100 kph, but none — not even that Brutale from last month — have felt as intimidating, as potent. The RD’s gearbox isn’t the slickest, but if you manage to go up the gears all the way to sixth with the throttle wide open, you will learn a few lessons of the importance of life along the way. No wonder we still speak of it in hushed tones.

You’d expect the RX to be some sort of watered-down RD, but no, it isn’t. It is, in this state of tune, scarier, but not in an isolating sort of way. It urges you to be silly, to break the law. Now, I really like to wheelie (on motorcycles, that is), but even if I didn’t, this RX leaves you with no choice — and I’m not exaggerating even a wee bit. In the first three gears, all this RX does is wheelie. No baby monos either, by the way — properly scary ones! You can try what you like, but you just can’t escape a wheelie if you ask for manic acceleration and boy, this thing is quick. Like the RD, the RX’s brilliance, too, is beyond its output figures. It’s all about the sensation, the emotion of unfiltered, unabashed speed. It revs clean to the top, the exhaust emitting a loud but musical note, but above all, there is a sense of mechanical motion to it that the motorcycles of today, howsoever well-engineered, simply can’t match.

AND FUN?
Think of the RD as a mafia boss and the RX as a street thug, and you’ll get the picture. The RD is linear, more grown-up in its mannerisms and extremely powerful, and while it doesn’t wield a pocket knife, it is the master of intimidation through simply its intent. The RX, on the other hand, tries all sorts of ridiculous things to frighten you, but it’s a form of friendly bullying than a murderous plot. When a machine does things in all its mechanical capacity to establish a connection with its human counterpart, in the process defying a few laws of physics, we sum it up as ‘fun’. In that sense, either of these Yamahas is more than just fun. These are motorcycles built with soul, a sense of keeping things simple and an honest intention of unadulterated speed. It’s no wonder that they beat evolution at its own game, no?

We’d like to thank Karan Lokhande and Sufyan Ahmed for letting us have a ball with their prized motorcycles. Hope we can have another go, chaps? 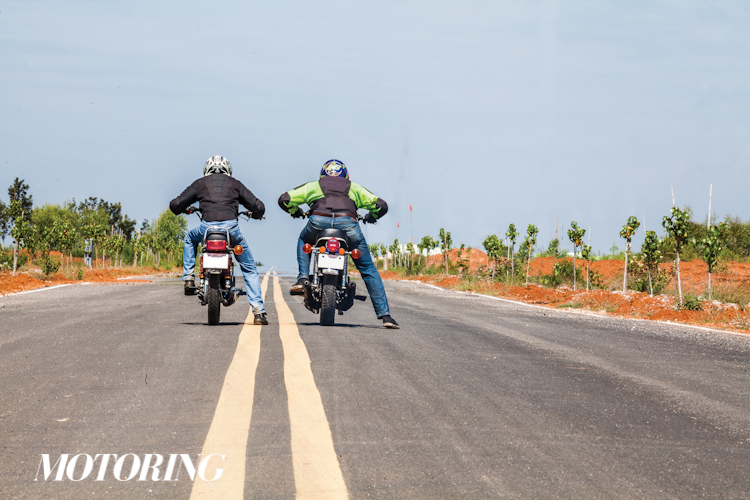