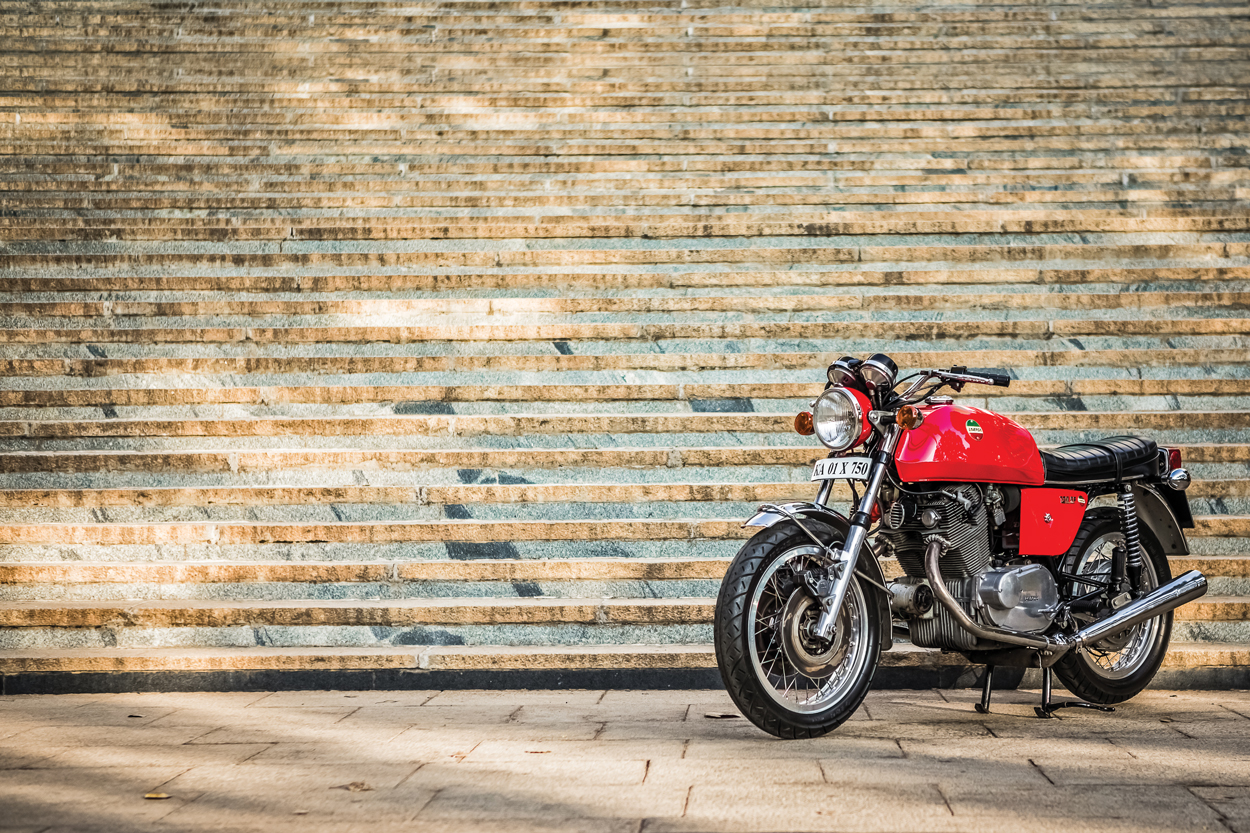 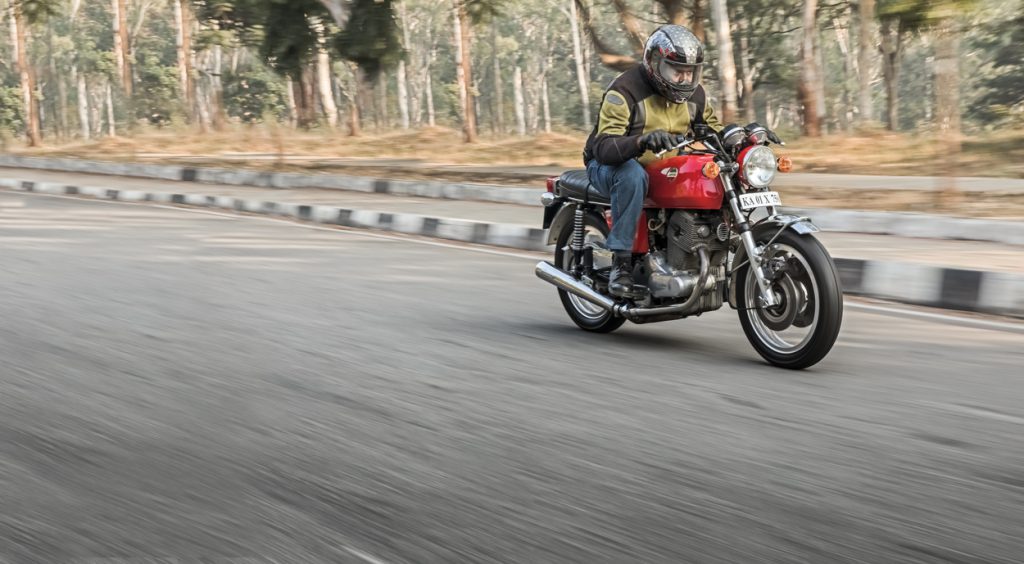 Feminists, be warned. What I am about to say might rub you the wrong way, but it is pure fact, nonetheless. Besides, the maker of this motorcycle, honestly, could not be bothered because it obviously catered to a different market. In a different era.

So what do I have to say? Well, for one, this motorcycle was built to be ridden by men. Not the metrosexual wimps who hang around in their skinny jeans borrowed from their girlfriend’s closets. Real men; the sort with hairy chests, gunny sacks to hold their marbles and hands that could retire a stone crusher.

Ladies (the few that have still hung around to read this far) and gentlemen, I have ridden few motorcycles that exude more testosterone than this one. It takes a vice to pull in that clutch lever and with the sheer heft of it, it’s like pushing a house around when it’s not going ahead under its own steam. The Laverda SF2 750 is a bloody handful, and by George, I love it!

You see, the legacy of the brutish Laverdas was born in 1964 when Massimo Laverda, son of the marque’s founder, Francesco Laverda, visited the US of A to check out what was at the time the biggest motorcycle market in the world. Everybody worth their nuts and bolts were vying for a share in the US motorcycle market for obvious reasons and Laverda, for the fear of missing out (or FOMO to you hipster types), was desperate to get into the melee too. But the US market, with its expansive highway system, was different and large capacity motorcycles ruled the roost, something that the small displacement motorcycles that filled Laverda’s portfolio simply were not.

The next year, Massimo managed to convince his father that big bikes were the ticket into the US market and by 1966, a 650cc parallel twin prototype was unveiled to the motorcycling world. Many onlookers remarked at the uncanny resemblance this motorcycle had to the Honda Hawk, and that according to motorcycle folklore, was simply because Massimo had looked towards the Japanese twin for, er, ideas. A couple of years later, this prototype finally went into production and Laverda’s reputation of manufacturing big-bore brutes was conceived.

From this 650cc was born the protagonist of this action flick which gained 100cc and was the model that finally made Laverda’s debut into the US market, and was marketed with the American Eagle brand name. It would seem the powers that be felt ‘Laverda’ didn’t seem Yank enough, and it was imperative that the country’s name and national bird would be together put to work to make folk feel like letting go of their dollars.

Unfortunately, the American Eagle didn’t fly to the lofty heights it was intended to, and by 1970, Laverda was selling its big twins as er, Laverda twins. Meanwhile, Laverda launched a tweaked 750 twin the very next year and it was christened the ‘SF’. The SF was an acronym for ‘Super Freni’ (Italian for Super Brakes), which was a hint to the new huge 9-inch twin leading shoe drums – of Laverda’s own design – that had replaced the Grimecas of the outgoing model. This motorcycle, however, was much more than the same bike with new drums.

The model kept evolving and by the time the SF1 was launched, noise emission norms had grown more stringent. To get by these and yet retain optimum back pressure for performance, Laverda put in a collector box between the two pipes that managed to do what it was intended to do. Unfortunately, it also did something else as well, which was not a good thing. Spirited riding caused the collector to kiss the ground, much to the chagrin of the rider.

The SF1 gave way to the SF2 which, apart from now having twin discs at the front, also got new Nippon Denso instrumentation and switch gear and Ceriani forks. Although some specimens were dispatched with a drum at the rear, most were sold with a new aft disc. It was just the small matter of clearing the accumulated old inventory in the factory before moving on to the new stock, I suppose.

The SF series culminated with the SF3 which was launched in 1976. The bike got shod with cast alloy wheels and the gear shifter — till this time on the right (wrong!) side like those quirky Brit bikes — was moved to the ‘right’ side, which was on the left! But the SF was soon put to rest as Laverda was moving on to bigger things, and its attention was now on the 1000cc triples; but that tale is for some other time, for we are to concern ourselves with the SF2 for now, of which a pristine specimen, dating back to 1974, was unearthed here in our very own country. 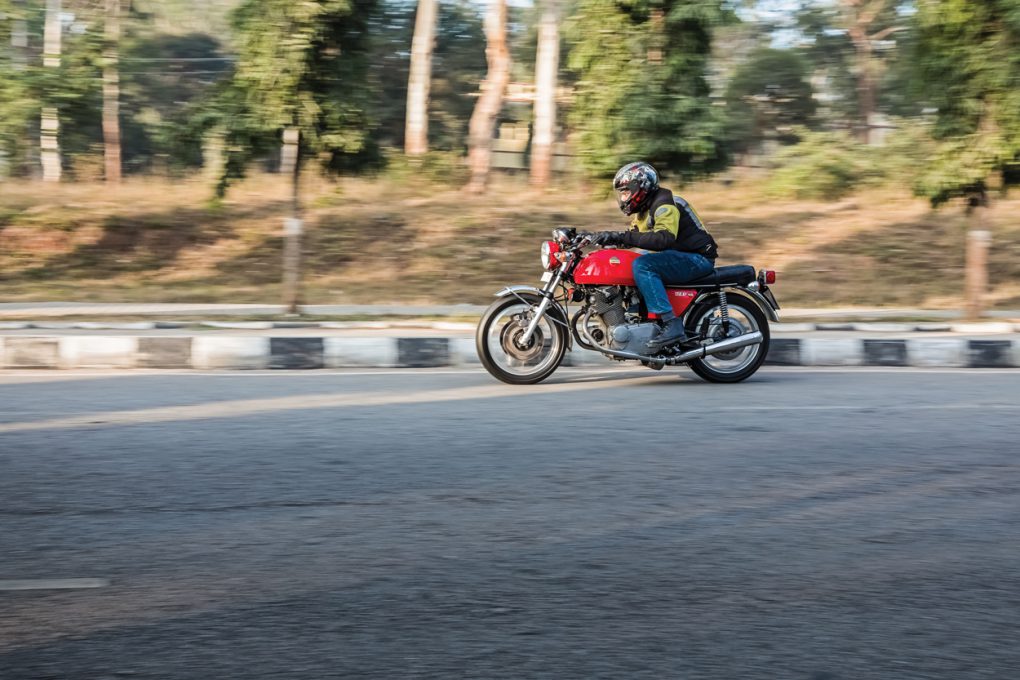 Jeevan Joy is a Bangalore boy who is heavily into classic VW air-cooled bugs and the like. But motorcycles too have a special place in his heart, especially ones that are as far away from the norm as a rabid dog is to water. So when this motorcycle, which was part of a well-known eclectic collection, came up for sale some 10 years ago, he just had to have it. And he has had it ever since.

Now having done with the customary history of the model and the provenance of the specific bike, I’ll get into the part I like best – the riding! And what better way to get with it than with the starting ritual of the motorcycle!

The 750cc parallel twin motor is fed through a duet of 36 mm round-slide Dellorto pumper carbs. To get that hulking lump of engine going from cold, the throttle must be rotated a few times to get some neat fuel squirted by the accelerator pumps of the carbs. By the way, this particular bike likes it pumped exactly five times when dead cold, and twice when warm, according to Jeevan. I followed his advice and it started every single time, so he obviously knows his bike inside out.

Coming back to the starting ritual… once the throttle is pumped, the choke is engaged, the ignition is turned on and with a gentle prod on the starter button, the mighty twin is woken from its slumber. The motor sounds a bit off when cold, but gradually sorts its mood out as it warms up. The clanking mechanical sounds gradually go quiet and before we know it, the engine is up to running temperature and we are ready to roll.

Jeevan is a tad concerned about me trying to come to terms with the right-hand shifter of his beloved Laverda, but I assure him that years of me riding old British machines should come into use some day, and today was it! But before I engage the first cog in the Laverda’s 4-speed gearbox, pulling in the clutch lever feels like I’m trying to bend a railroad track with my pinkie. I have read about how hard Laverda clutches can be but even then, I wasn’t quite prepared for it. Apparently, re-routing the cables and utilising a longer lever for better leverage alleviate this well-known Laverda facet, but Jeevan likes keeping things genuine. And real. When I first met him, I couldn’t help but notice that his left wrist is pronouncedly thicker than that of his right, and I now know why! Okay, I just made that up, but with a clutch like this, I wouldn’t be surprised if it were actually true.

The first gear engages flawlessly and I give it some gas. The motor pulls strongly, and it is time to get into second. The Laverda keeps picking up pace, and I keep putting it through the gears. The engine’s soundtrack is strong and guttural, with the intake roar coming in through the seat and seemingly utilising my torso as a resonating chamber so much so that I can feel the boom in my chest. The original airbox has been tossed because it would let water in, said Jeevan later, and in its place are two individual pods that the carbs inhale through.

The Laverda’s crank phasing of 360 degrees, pushing both pistons up or down simultaneously in their respective cylinders, is generally regarded as just the right thing to induce vibrations and the old Brit twins are proper validations of this theory. However, with the SF2, this does not seem to hold true. I pushed the motor close to its 6500 rpm redline, but neither my teeth fillings nor anything bolted on to the motorcycle shook loose. The reason for this is because the motor is heavily over engineered, with the crank supported with not less than five bearings when about three was the norm. The solid tree trunk-like frame is also why the Laverda does not vibrate itself into self-destruction – it simply is so robust that it prevents anything from moving.

But all this liberal slathering of metal comes at a price. The Laverda tips the scales at a portly 215 kg. The consolation, however, is the fact that once you get this show on the road, the weight simply does not bother you anymore. Although the SF is quite a tall bike, it seems to carry its weight not as high as its styling would imply, and that is a great thing.

Before I know it, an rickshaw has decided to come to a dead halt in the middle of the road. And I summon the brakes. Well, the SF in its name might have stood for ‘Super Braking’ back in the ‘70s, but the only superlatives to make themselves known that sunny morning in Bangalore were the expletives pouring out of my mouth. 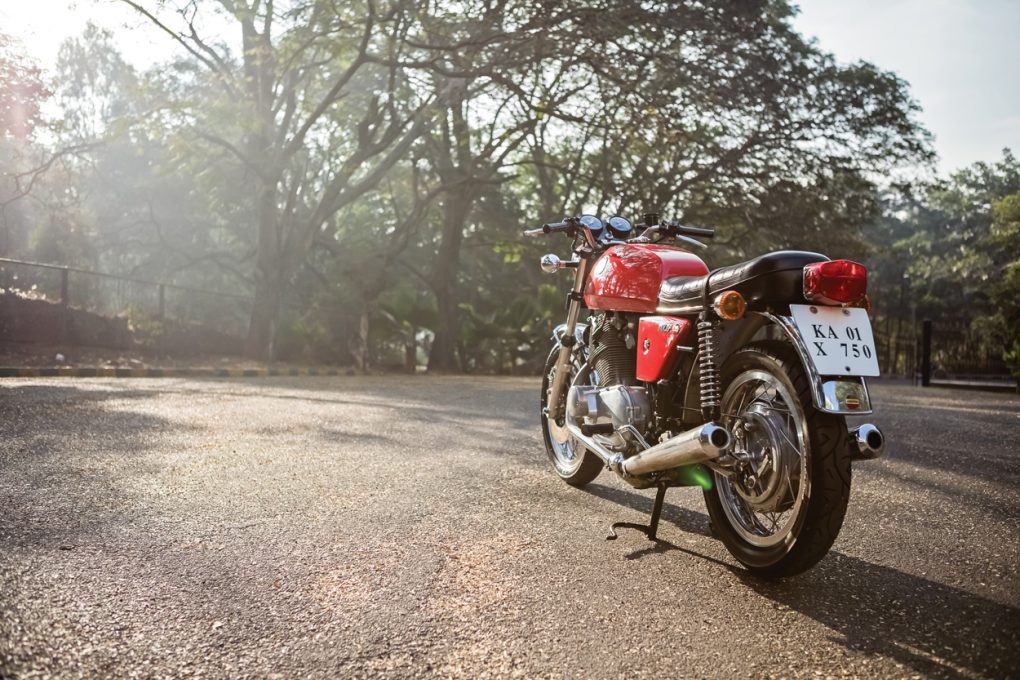 When one sees a disc brake on a motorcycle today, it tends to exude a sense of foolhardiness from within the beholder because of the performance, and subsequent confidence, that modern stoppers provide. These forty-year-old discs, however, are something else altogether. They might have been great back in the day, but in the current scenario, it took me standing on the rear brake pedal and my by now white knuckles pawing at the front brake lever to shave off enough speed to manoeuvre around that blasted three-wheeler. On later narrating the hairy episode to Jeevan, I was informed that the discs weren’t set up right and the master cylinder and callipers needed an overhaul. So, in all fairness, they might actually be way better when they are working right.

There’s a reason why these big Laverdas have such an ardent fan following and I saw it first-hand with this machine. These are motorcycles that were built to do one or two things perfectly and everything else could be damned. There was no such word as ‘compromising’ in their vocabulary; it was always all or nothing. You either manned up or shipped out. Yeah, this is a real man’s bike, all right!