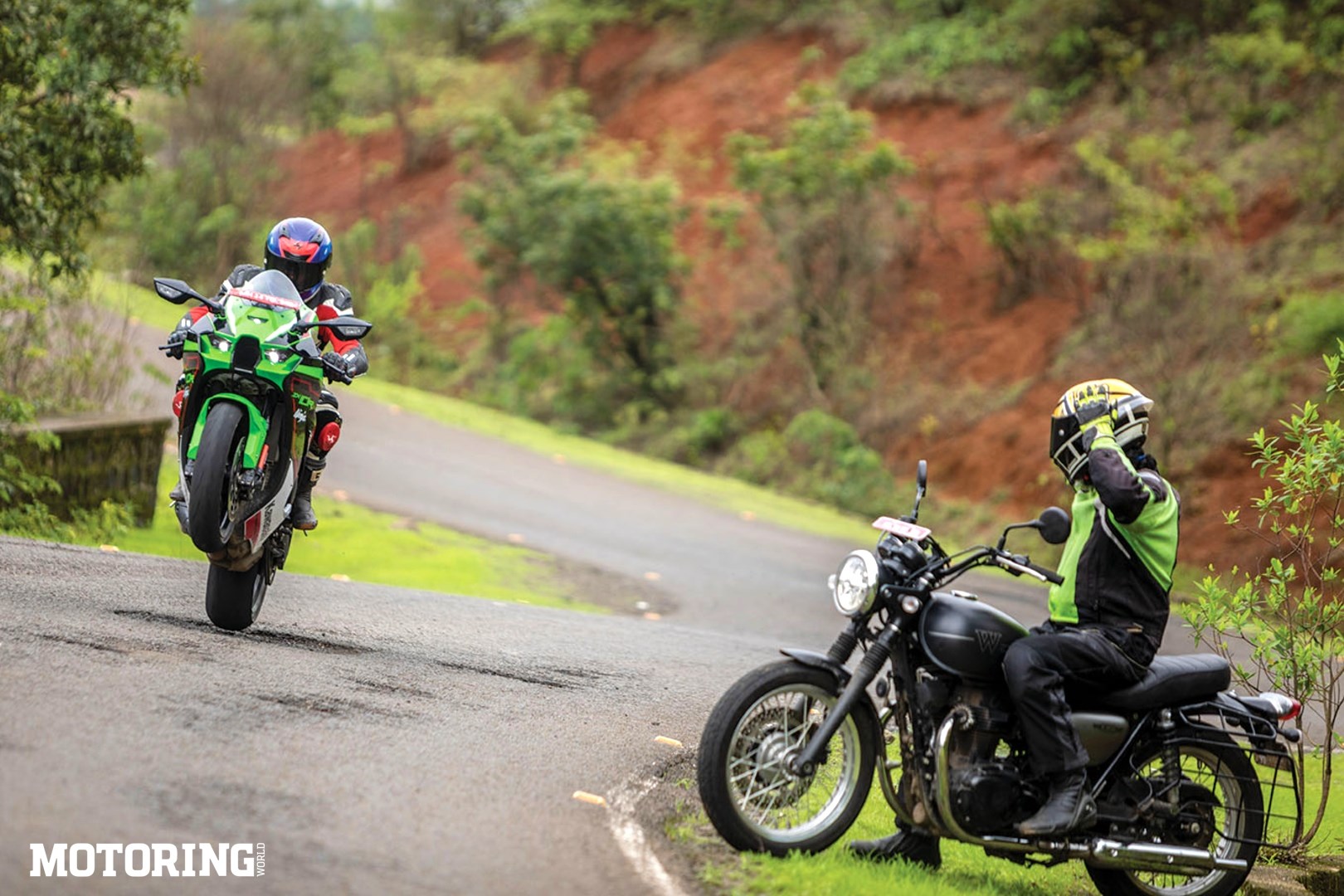 I envy motorcycle manufacturers. If you imagine being able to build virtually any bike you wanted to, you’ll see where I’m coming from. And few manufacturers are as prolifically adventurous as Kawasaki. Dirt bikes, retro bikes, V-twin cruisers, adventure tourers, sportsbikes — every genre and size of motorcycle rolls out of Team Green’s factory in Akashi, Japan. And I doubt any other motorcycle maker today is compelled to make a bevel-driven gem of a motor alongside a superbike of historic WSBK-title credentials. Obviously, the W800 and the Ninja ZX-10R are two ends of the motorcycling rainbow, with nothing in common except the name on their flanks. Only, said rainbow is all green.

With roots that go back to a British design from the 1960s, it’s the W800 that comes across as the family heirloom, while the Ninja is destined to keep sharpening itself for its purpose until it disappears one day. It’s inevitable, really; litre-class superbikes were already hilariously politically incorrect a couple of decades ago, so it’s only a matter of time until 1000cc inline-fours are replaced by 1000cc parallel-twins in the quest to save money for everyone, from makers to buyers to racers. It may well come to pass that the W800’s motor proves itself to be the more evergreen idea of the pair. 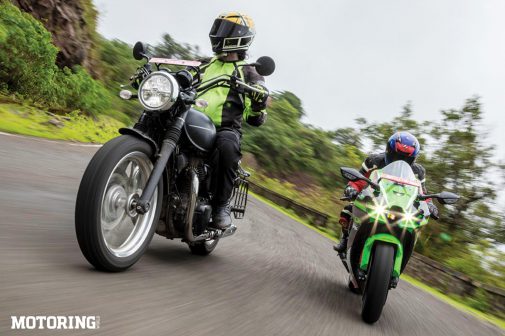 From somewhere up the road, the Ninja’s inline-four scream echoed back in my direction. At least today, there was no taming the 200-bhp work of art on a stretch of tarmac gliding along hillsides and making all the shapes that leave tyres with a good workout. But not on the W800. This laidback machine’s footpeg feeler bolts were lower than Bollywood’s standards, and dug violently into the tarmac with even halfway enthusiastic cornering. But I did like the super-wide handlebar; flat track bikes would’ve approved of it, though I couldn’t shake the feeling that the W would be far better off with a pair of low ’bars and rearsets. Maybe that would’ve given the 51-bhp twin a better chance of hanging with its racer sibling on that racer road.

Frowning at that number from a 773cc twin? There’s no need to — if there ever was a motor that was all about character, and not spec-sheet bluster, this is it. Of course, I fully expected to be blown away by the Ninja’s 998cc motor, to the point of giddy anticipation, and I was. It has always been impossible to resist the call of an inline-four howling its song of speed into the wind, and that’s where the ZX-10R was at its hypnotic best. A bike is always built around its engine, and nothing shows that better than a superbike. Every nudge, every tuck, every click, every shape — all of them transpire so the Ninja can live its life at the redline. There’s nothing in this world better than a superbike engine. And yet, it was the W800 that took me down with a near-perfect parallel-twin tackle.

Obviously, I didn’t expect it, which made it only doubly surprising. I walked towards the W800 grumbling sentences that held words like ‘Royal Enfield 650 twins’, ‘why bother’, ‘irrelevant’, in no particular order. And then the W’s motor roared to life, its 360-degree firing order silencing all my doubts. From naysaying to ‘All parallel-twins should sound like this!’, my mind changed directions like the ZX-10R in a chicane. In a world full of 270-degree parallel-twins, the W800 was a reassuringly genuine heartbeat, loud and proud.

So I thought, ‘Sure, this’ll be a chilled-out ride,’ and it was, too, for the most part. After the Ninja’s headbanging ways, the W800 was a blues day out. It rumbled along at low revs, as the wide ’bar and low seat made it feel like the easiest thing to ride. It was smooth and unassuming, with a lovely sound on the overrun that made me wish for a studio to record it in. It just had this disarmingly honest nature below 4000 rpm that I fell for. And which later pulled the carpet from under my feet.

I expected the W800 to be a bit ‘gentle’ all across its rev range, but post-4000 rpm, it became an entirely different animal. The first time I opened it up on a long and empty stretch, the W800’s change of sound suddenly made me wonder if Kawasaki had somehow managed to fit two extra cylinders in the P-twin. From then on, I rode the W as I never imagined I would, redlining it in each of its five speeds, my first-gear surprise culminating in fifth-gear disbelief. I don’t remember the last time an unassuming motor had this effect on me, except perhaps on an actual old British bike. Though I bet this Kawasaki will run forever and that old Brit bike won’t. Oh, and I wish Kawasaki brings the shiny W800 to India, not just this blacked-out tedium.

The word ‘soul’ gets thrown around a lot, but it certainly lives in the W800’s engine. The Japanese may have killed the British bike industry, but Kawasaki has kept a part of it alive, perhaps as penance. Or maybe it was just too much for the Japs to resist making an ultimate British twin with all the right materials and tolerances. Whatever the reason, we must all be thankful for it because this is a truly special engine.

However, the rest of the W800 is pretty much exactly the opposite. With decidedly average suspension and brakes, the W800’s price  (Rs 7.19 lakh, ex-showroom) is hard to stomach. But you know what? I’d take it. And then set about making it into the tight café racer it needs to be. As it stands, though, you do have a comfortable ride quality, though the seat is soft and will have you squirming well within an hour. The front end wobbles at anything above 120 kph, presumably due to the classic-tread 18-inch tyres. And the brakes are like government offices, making do with the bare minimum each passing day. 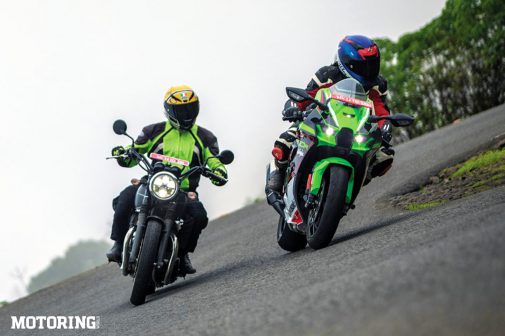 No such fuss, of course, with the Ninja. It remains a master of motorcycle martial arts. It was so easy to ride fast, the real world was too slow a place for it. And yet, it handled the dullness of the daily grind far better than a superbike has any right to. Sure, it will give you better lap times than ever, but I was more thankful for its compact dimensions and easy handling in traffic. One day, if I ever get to ride it on a track, we shall see just how much Ninja I can handle. And yet, it was the W800 that stole the show today. To do that next to a superbike, well, that’s quite something. 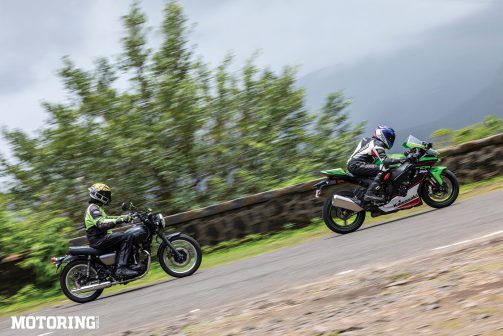 Between these two, there are entire worlds of riding feel and stories. One harks to the past, the other bellows against the future. Both are contrasting studies of Kawasaki’s  and Japan’s engineering capabilities — just that one wants to stand the test of time, while the other wants to leave time behind. Wanna guess which is which?