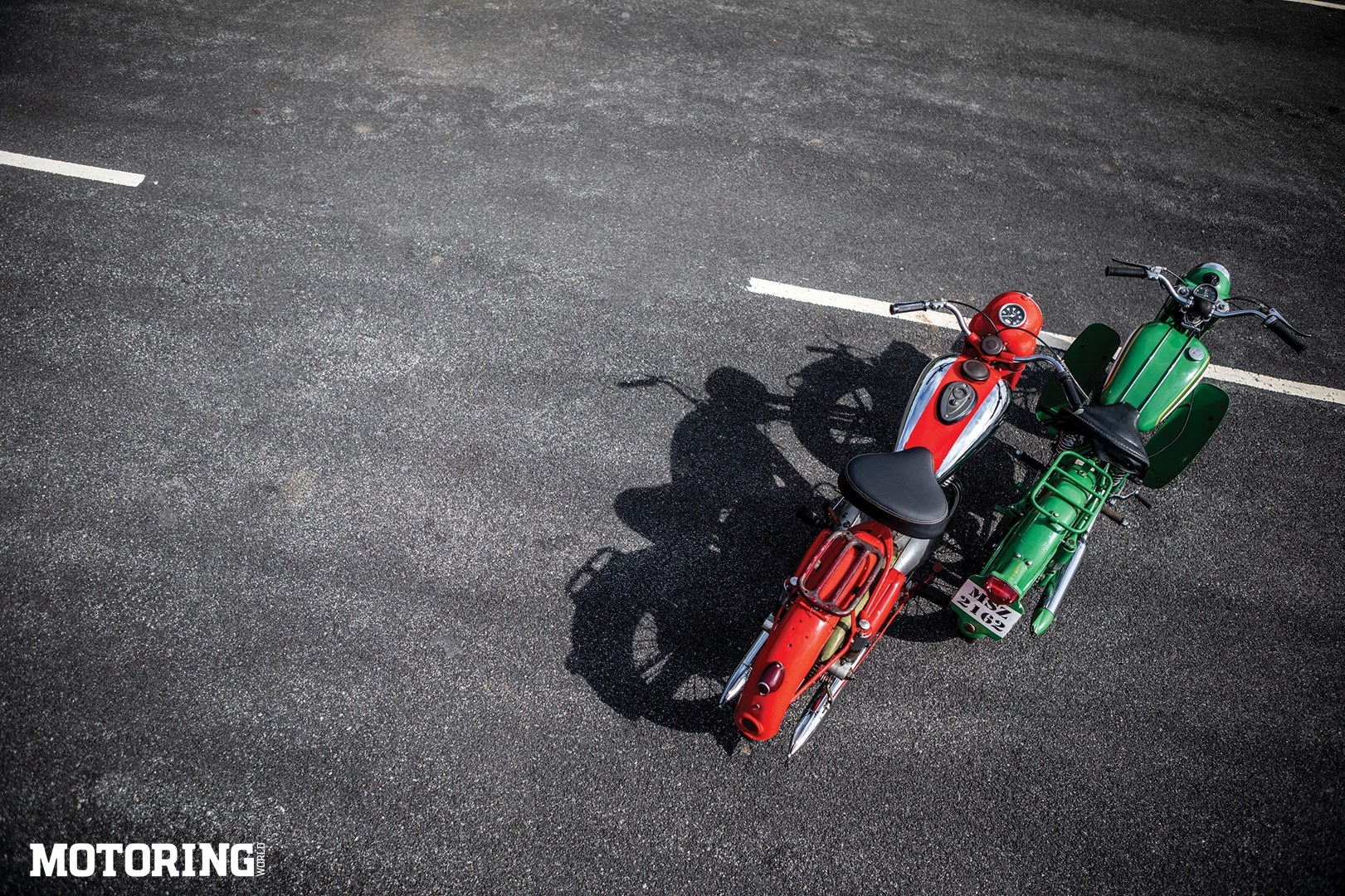 If this two-wheeled duo were to come to life, it’d be as Simon & Garfunkel. I can’t think of better motorcycles with which to call on Mrs Robinson. Never mind that their combined age is well over 120 years, and that quick getaways from adulterous encounters will only end in a hilariously slow game of ‘Who Gets Caught First’. Most assuredly, the BSA Bantam will be captured before the Jawa Perak. However, if no one’s giving chase, they’ll both likely keep droning along as they have for roughly 60 years apiece, outlasting all the irate husbands they escape. Not bad for a couple of old codgers. 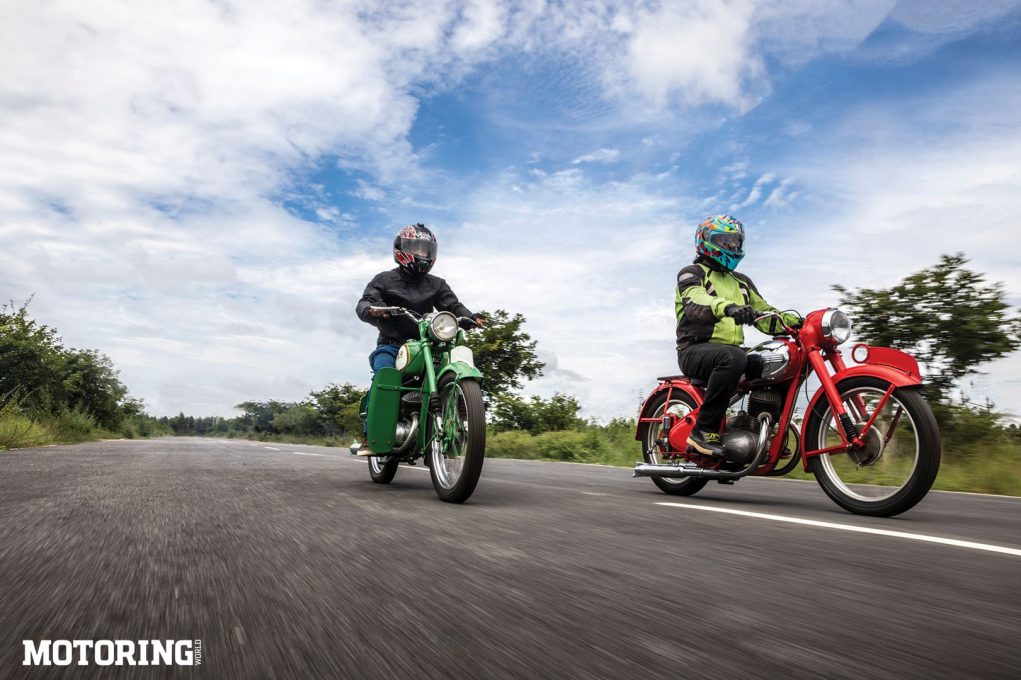 The Bantam and the Perak have a whopping number of common ideas: 19-inch wheels, swooping shapes, teardrop tanks, curvy handlebars, single seats, carriers on their rear mudguards, telescopic forks, plunger rear suspensions, fishtail exhausts, and two-stroke motors. I suppose that’s understandable since they come from the same troubled times; the Perak was introduced at the Paris Motor Show in 1946 after being developed and tested in secret, right under the noses of Nazi patrols in German-occupied Czechoslovakia; the Bantam came along in 1948, copied from the 1939 DKW RT 125 as part of war reparations after everyone was done thrashing Germany.

And as the Bantam came into its own after the war, the Perak got smothered when its country became part of the Eastern Bloc. And even a motorcycle as hardy as the Jawa couldn’t ride through the Iron Curtain. As I looked at the two, I wondered if the two-wheeled world would’ve been a different place if Jawa had been afforded the freedom that BSA got at the time. There was also the small matter of the 250cc Perak being a better fit for my not-so-Bantam body, and was exactly twice the displacement of the BSA. The Jawa also had the edge when it came to design flair; the Perak’s cabling and wiring was hidden away as much as possible, and even if both bikes featured sprung seats, the Perak’s arrangement was a far more elegant one and it gave the impression of a floating seat. These are small but crucial details that shone a light on the motorcycle-design talent in that part of the world at the time. When it comes to Jawa, the what-ifs never seem to end.

‘Perak’ is Czech for ‘spring’, not the season, but a reference to the springs it features. It was also the name of the Spring Man of Prague, an urban legend famous for his unbelievable leaps. The BSA shouldn’t feel left out, though, because a similar weirdo is found in British history from 1837 called Spring-heeled Jack. If you ever wondered how people entertained themselves before motorcycles were invented, there you go. However, it is thought that the Czech legend was probably borrowed from the British one, though I cannot say for certain if Jawa’s founder was ever aware of that.

However, it is reasonable to assume that František Janecˇ ek directly intended the Perak’s twin-port motor to be an improvement over the Bantam’s borrowed one, given his and his compatriots’ tendency to stick it to the Germans. And the Jawa certainly feels like it. In fact, the same basic design endured for decades, long after the bike died in 1954, reaching into the Jawas and Yezdis that sold in India. However, if you think the Perak felt like any of those, I assure you that it didn’t. And despite its half-size motor, the Bantam ran the Perak close in an outright decibel duel. Kind of like Paul and Art, even if the former was probably better like the Jawa. I’m sure that’s up for debate the moment someone reads this.

What was beyond doubt, though, was that neither the BSA’s nor the Jawa’s seat springs would support my weight. Forget metal, they flattened as if I’d sat on noodles. As I mentioned earlier, this was not a problem on the Perak since it was a roomier bike to be uncomfortable on. On the Bantam, though, I was like a bolt on a nut that’s two sizes smaller. Nonetheless, for the purpose of puttering around, I grinned through gritted teeth and carried on, much like Simon & Garfunkel did at concerts after their break up. The 4.5-bhp 82-kg Bantam blatted its way to 45 kph, a bit short of the 45 mph (around 72 kph) that its brochures promised back in the day. And it did so with 3-speed determination, too, until the Perak overtook it.

Maybe Europe of the 1940s didn’t let the Perak beat the Bantam, but the India of 2020 certainly did. Again, the Jawa’s double displacement produced exactly twice the Bantam’s horsepower at 9 bhp, and its own period brochures claimed a top speed of 100 kph at the end of its 4-speed gearbox. At 115 kg, it was heavier than the Bantam, but still a lightweight on its own. However, there was an overall refinement to the Perak that the Bantam could not aspire to. The Jawa felt closer to a modern motorcycle than the BSA, and that’s saying something for a design from the 1940s. And of course, unlike their four-stroke counterparts of the era, being two-stroke light ensured that their brakes had quite a bit of say in matters of arresting speed. Okay, only the rear ones, but those were enough to get their tyres screeching.

With 19-inch wheels, both bikes are refresher courses of the gyroscopic effect. They lope along, stable and assured, and ride quality on these decades-old bikes is still shockingly good. I couldn’t really corner these machines anywhere, but they performed flawless foot-up U-turns whenever required. The Bantam was easier to throw around, but not by much. If anything, the Perak’s added stability was welcome on bikes as light as these. But for all practical purposes — which for bikes like these largely includes being parked for months and the occasional show-off ride — they can handle everything you can throw at them. Pity, since they are capable of so much more, though their rarity prevents tossing them into the deep end of any adventure. 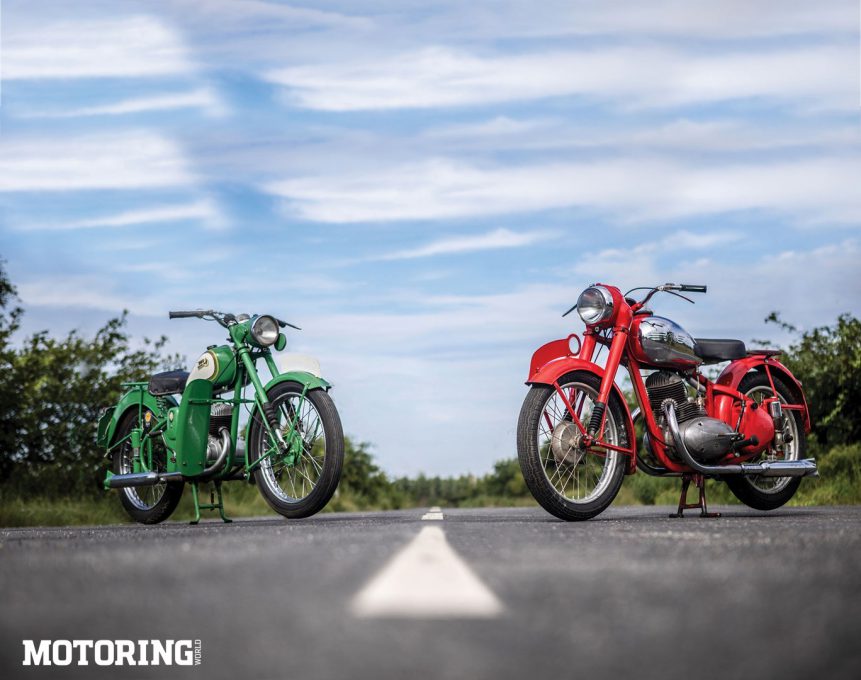 Years ago, the same world politics that propagated the Bantam and its clones all around the world also amputated the Perak’s reach. Communism didn’t like the idea of sharing its motorcycles, it would seem. Nonetheless, I bet the Bantam and the Perak have met again and again on roads across time and space, and will do so for decades more to come. After all, connections like this one aren’t easily broken. Wonder what Mr Robinson would’ve thought of that.