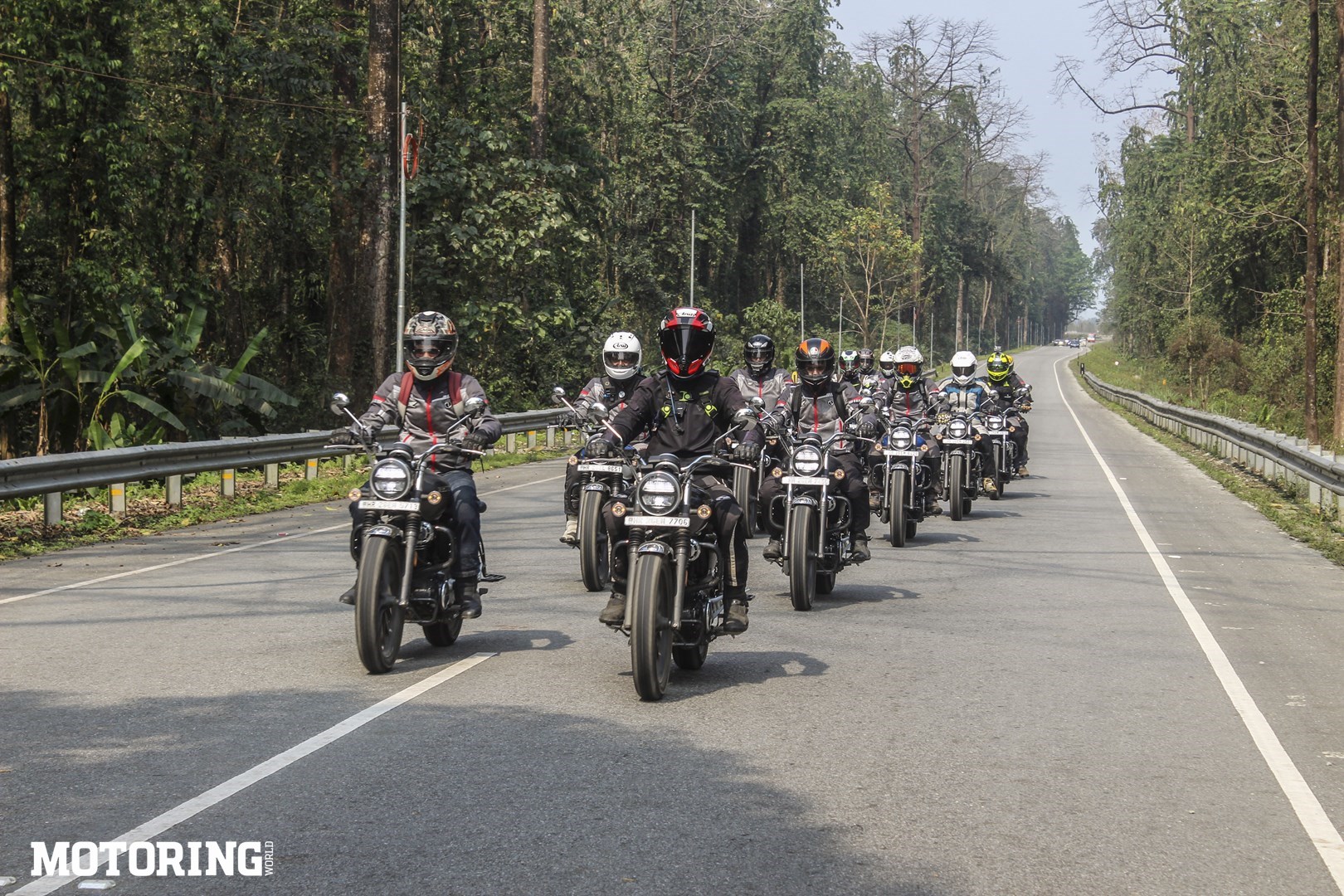 Ping! An email from Kartik appeared in my inbox which, little did I know, would turn out to be the highlight of my year. It was an invite for a quest to the ‘land of the dawn-lit mountains,’ which is what Arunachal Pradesh means in Sanskrit. I had once visited this state before, but only for a short period, though even that was enough for me to fall helplessly in love with it. That is exactly what this experience has been all about.

Before I begin with my journey, let me bring you up to speed about Arunachal Pradesh. It was earlier known as the North East Frontier Agency (imagine living in a state with that name!) and shares its international border with three countries, Bhutan, China, and Myanmar. Being the largest northeastern state it is inhabited by 26 major tribes and around 100 sub-tribes. This oxygen-rich state has a forest cover of over 82 per cent and is also home to four big cats — tigers, leopards, clouded leopards, and snow leopards — all in one protected habitat. Yes, we did spend a night in the very same national park, but more on that later.

DAY 1: Hello, North East!
I have this habit of checking flight paths during my travels. On this occasion, it paid off because after the layover in Delhi, I picked the window seat on the port side to get a good view of the Himalayas and I wasn’t disappointed. Gazing at the snow-capped mountains from a height of approximately 30,000 feet, the captain’s announcement told me that it was none other than Mt. Everest that I was staring at. On landing in Dibrugarh, my thoughts moved to the motorcycle that I was going to be riding for the next few days, the Honda H’ness CB350. Having ridden it back home, I didn’t have any complaints about it. But being a motorcycle designed for the urban environment, I was sceptical about how it would perform in mountainous topography.

DAY 2: Jinxed Already?
(215 km)
My alarm was set to 5:30 am, a good two and a half hours before the roll-out time, but I quite literally jumped out of bed because of the daylight outside. India has only one time zone, and this far to the east the sun rises at around 4:30 am and sets by 5:30-6 pm. This took some getting used to. Soon I was all geared up, done with loading by luggage in the truck and breakfast, ready to get on the saddle of the CB350. I let the bike idle to get to operating temperature, took it off the stand and slotted it in first — and the motor died. I tried again and the same thing happened. The kickstand safety switch had malfunctioned. Luckily, it was a quick fix and I soon lined up at the back of the convoy which was led by motorsport veteran Vijay Parmar and his team.

We were headed for the Bomjir bridge, with our first stop in Ruksin which lies on the border of Assam and Arunachal Pradesh, for the ceremonial flag-off of the SunChasers ride. After a short performance by a tribal group  and a press conference, we were back on our bikes, riding on smooth tarmac that seemed to have been paved only for us. The reason  behind this can be attributed to  the rift between India and China at the international borders. Improving the infrastructure is one of the  best ways to keep a foreign country from encroaching.

Halfway through the day, we turned off from the tarmac to a  soft silt path which led to the riverbank of the Brahmaputra where we had lunch. The next half of the day’s ride was spent traversing canyon roads where I, along with the others, scraped the ’pegs of the CB350 around twisties. We arrived at Bomjir where we were to spend the next two nights in wooden  huts with the view of a large river body that converges with the  mighty Brahmaputra. 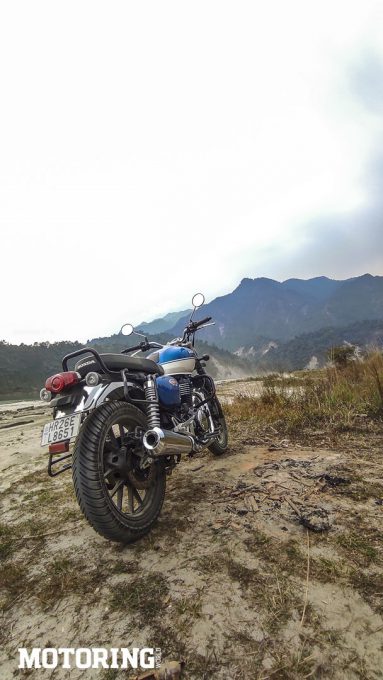 DAY 3: Mountain Pass
(190 km)
The next morning we were back on the road headed for Tezu and then Lohit View for lunch, and then back to Bomjir. The landscape around us was constantly changing from flat plains to densely forested sections to long bridge crossings over multiple tributaries. Even the weather would change without warning. The day started overcast, which later changed to rainfall, and then again overcast by the time we crossed Tezu. Soon after Tezu, we turned off the highway towards a road that narrowed to a single-lane ghat leading to Hawa Camp. We savoured a tasty lunch with the view of the Lohit river flowing down below. It is said that delays are sometimes God’s plan to give something better.

Arun and Jobo, journalists from other publications, had to wait for lunch while the rest of the convoy had to head back to Bomjir. I elected to stay back so that I could ride back with them, and my patience was rewarded with straight, empty roads with long sweeping corners. It was like the gods of speed wanted to see the CB350 at full clip. The three of us spent the ride back out-dragging each other for kilometres at a stretch. What fun! It was a blessing in disguise, and truth be told, the CB350 held on well without showing any signs of any drop in power. I was thoroughly impressed!

DAY 4: Roads? What’s that?
(150 km)
The next day had plans for us. We were to head to Namdapha National Park while passing through the town of Miao. And no, as much as I wanted, it wasn’t crawling with cats. The first 100 km from Bomjir to Miao were all paved, however, it was the last 50 km that none of us had prepared for. With 50-foot tall trees becoming a common sight, soon the road that we were riding on ceased to exist. What lay ahead was a river crossing followed by kilometres of slush and muck with patches of loose gravel. This is exactly what I was worried about with the H’ness.

However, to my surprise, once I had the traction control switched off, I was standing on the ’pegs and having a ball of a time, gunning the bike along. From ruts to jumps to slippery patches, the H’ness held on well. After the last patch proper off-roading, we were tired and called it an early night to get as much rest as possible. 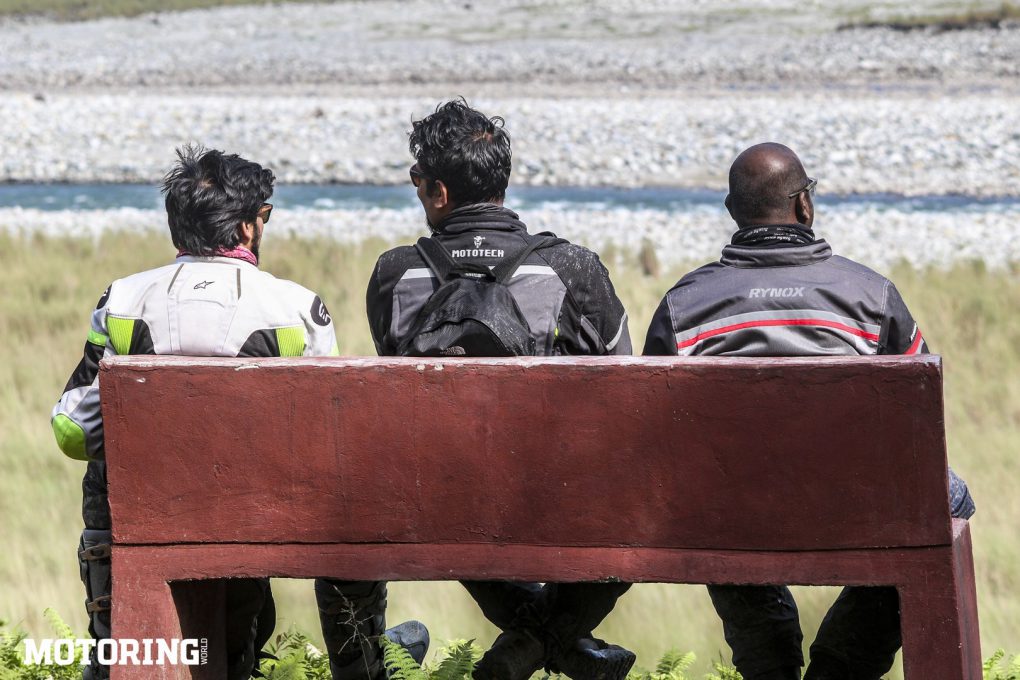 DAY 5: Don’t I need a passport for that?
(140 km)
The crew had told us that the fifth day of the ride was going to be an eventful one. And they were right! We had silky tarmac for the most part, thanks to the Border Roads Organisation, and very few mountains to go through. It all changed when we were led by an army vehicle up a twisting road that barely had regular traffic passing through it. It was the Pangsau Pass that lies on the crest of the Patkai Hills on the India-Burma (Myanmar) border. The pass has historical significance as the Stillwell Road, built during World War II to allow Western Allies to deliver supplies to China and to aid the war effort against Japan.

Day 6 & 7: The Final Frontier
(80 km & 160 km)
The sixth day of the ride consisted of visiting the Golden Pagoda as we headed back from Miao to Namsai. Our convoy went through acres of tea plantations and vast expanses of flat land meeting the horizon. The day ended with a grand celebration that went on till late at night, thankfully because the roll out on the next morning wasn’t an early one. The seventh and final day of the ride was about heading back from Namsai to Dibrugarh. As we were nearing the end of the journey, traffic had started to increase, which meant we had to reduce our pace.  The last 20 km were mostly spent riding through the city traffic before reaching the same hotel where we’d started from.

With that, the ride was officially over as we parked our bikes in the same parking lot where we had received them. Later that day, along with a bunch of other journos, I headed out to feed on authentic Arunachal food one last time. We also shared and laughed over the incidents that occurred during the journey. 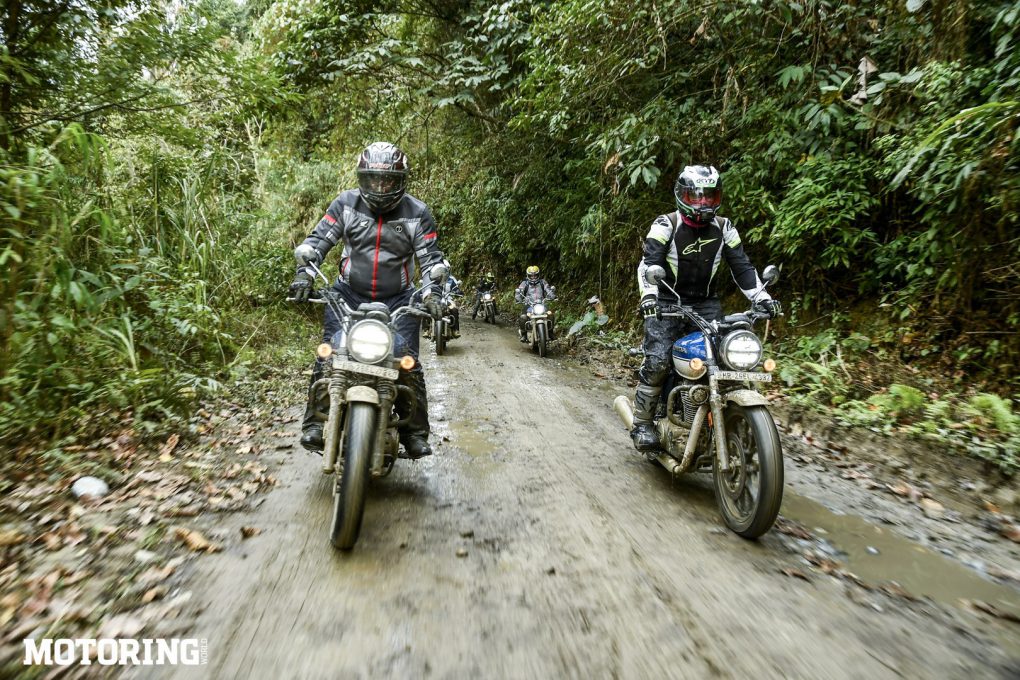 The Honda CB350 SunChasers ride will undoubtedly be one trip that I’ll never forget. It was a fantastic experience to explore the diverse beauty of Arunachal Pradesh, all from the seat of a motorcycle.