As a motorcyclist, it’s impossibly difficult to completely imagine all the thousands of interactions that take place within the engine while you ride. The parts come together in a symphony of metal, electricity, fuel and oil to produce thousands of controlled and perfectly timed explosions per minute. Energy is then harnessed and converted into a driving force through the crank and then the transmission, which is then sent to the rear wheel. This harmonious cycle is what fuels our lust for motorcycles, but it is a concept that is vaguely understood in the riding community, give for the engineers among us. It is a concept that has evolved drastically since the first true motorcycle was produced by Hildebrand & Wolfmuller way back  in 1894.

Harley-Davidson wasn’t far behind; it produced its first motorcycle a decade later in 1903, and its first twin-cylinder engine in 1914. Over a century and seven engines later, we now have the Miluwakee-Eight; a big-bore V-twin that comes in a 107 (1746cc) and 114 (1868cc) cubic inch form. And what better way to truly understand and appreciate the functioning of an engine, other than taking it apart and studying what it does. Well H-D has recently launched the Harley-Davidson University in Gurugram, Gurgaon; a place where you can do just that, under the guidance of experienced mechanics of course. We had the privilege of learning this process from none other than John McEnaney, the technical head of H-D South-East Asia, mechanical wizard, and all-round nice guy.

Despite the abundance of information on how to work on an engine on the internet, it remains to be in theory form. If you truly want to know how to work on an engine, then you must take it apart, bit by bit, which brings us to day one at the University. Now, the first rule to successfully working on an engine is having the right tools. H-D has provided highly specialised and high-quality tools for just this purpose. In fact, just the tools, tool cupboard, and hydraulic work bench cost about Rs 10 lakh for just one work station! And there’s eight of them. Harley doesn’t believe in cutting corners, and we respect them for that. 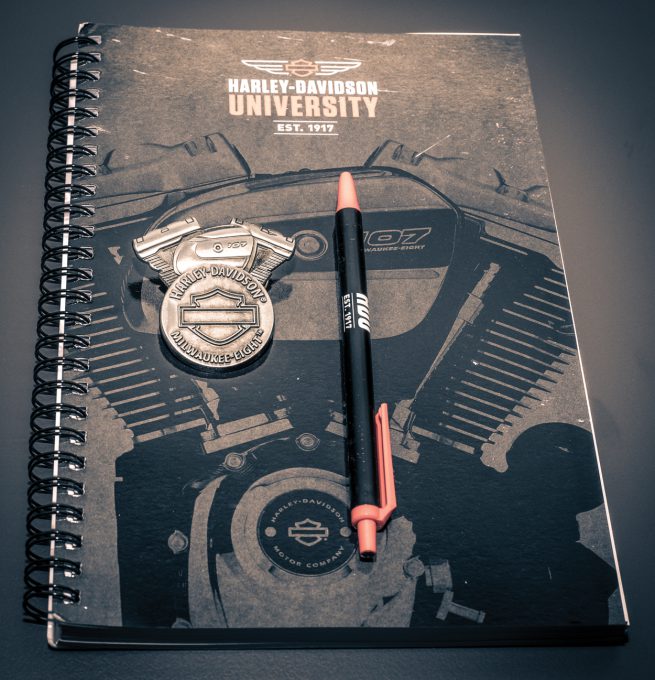 Right, so down to business. Now a workshop manual is indispensable; it has all the information you’ll ever need for that specific engine. But you must follow the process, something that is complete gibberish to the jugaad technique that is embedded so deeply in the Indian mindset. The engineers that designed this engine have reasons behind why these steps must be followed. Not only is the whole process streamlined, it allows you to troubleshoot for issues with the machine, and prevent any damage you may cause to the machine itself. There’s everything from torque wrenches to specialised heads to crank guards. You must know when to use the right tool for the right job.

The best way to disassemble an engine is to start from the head and work your way down. A process that took us a whole day, despite the overzealous efforts of one of our teammates. Four-stroke engines do have a lot of moving parts, and they must be removed in the described manner to avoid damaging some other part. And the parts need to individually labelled, too. Given that this is a twin-cylinder engine, certain moving parts mate with the part they connect to. By the end of the day, the tools were slipping from our oily hands, and the work bench was a bit of a mess. But it was quite intriguing to see the engine laid out before us, the dismantled sum of all our efforts.

Day two promised to be a bit trickier. If you’ve ever taken something apart, then you already know that things just don’t go back the same way. The same rule applies to engines. Aside from having to apply sealant on the designated areas and checking the gaskets for signs of damage, every single screw, nut and bolt had to be tightened to an exact measure of torque to ensure smooth running of the engine and ease the process of reopening the engine. Understanding how the timing of the engine works and getting the piston to the correct position is another critical step in reassembling the engine. Get this step wrong and you could damage anything from the piston itself, to the pushrods, to the rocker arms, to the hydraulic cam lifters.

Well, a lot of hairy moments, and another whole day gone by and the engine was finally reassembled. Despite our team taking a tad longer to finish than the others, we managed to wrangle all the parts together without breaking anything or leaving something out. I can’t exactly say the same for some of the other teams on the floor. ‘For God’s sake, it’s a simple process of just following the damn manual’ — I can still hear those words in John’s voice. The man does make complete sense, of course. So if you’d like to get to know your engine better, or just engines in general, then the Harley-Davidson University is the perfect first step to getting you there. After all, engines are fascinating things, and if you aren’t an engineer or a mechanic, it’s about time you get those veal-like hands a few scars to show off.