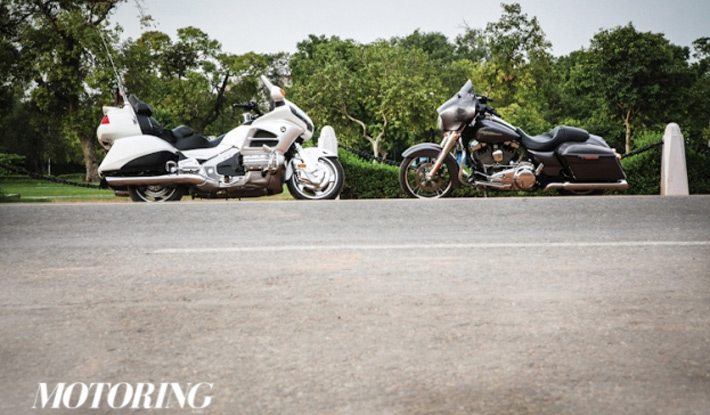 If you are under 15 years of age, you will be familiar with the term ‘swag’. Swag is not a physical entity, in that you cannot point at particular areas of an individual to determine whether or not it may be present. Swag is more a personality trait — flamboyance, a care-a-damn attitude and the ability to wear garden furniture as clothing. Understandably, then, I do not qualify as someone with swag. Jaspreet, however, does.

He, turbaned and large by any measure, rolls into view at 6 am on what looks like a spaceship, with a Punjabi Pop number blaring through the speakers. The spaceship turns out to be a Honda Gold Wing, and mild tremors are felt through the ground as he leans it over on its side stand. I feel under-muscled, almost inconsequential, in the presence of the Honda Gold Wing, its owner and the Harley that’s dragged me along to the shoot. Not to mention we’re in the capital city of India, where everything exists with a sense of absolute importance, amongst sprawling villas that belong to people who have an astonishing ability to make contradicting statements on live television.

Why have we decided to bring these two together? Well, isn’t it obvious? These are two of the largest mass production motorcycles in the world. Largest not in terms of engine displacement, perhaps, but more in terms of sheer magnitude. Each has more presence than most respectable SUVs out there and their ability to turn heads often ends in painful sounds of necks snapping like twigs. But they haven’t been created solely for the sake of proportions. These are two very functional motorcycles with a purpose to serve — that of fulfilling the touring aspirations of the wealthy and generously built.

The Harley-Davidson Street Glide is now the American icon’s flagship in India (until the new Electra Glide arrives, that is) and it’s got everything to justify that tag. No, wait, it’s probably got a whole lot more than you can imagine. So, apart from the touring essentials — a massive, torquey engine, handlebars as wide as Africa, humungous seats, hard luggage cases and much chrome — it’s got a rather comprehensive infotainment unit, high-output speakers, an iPhone charge dock, in-built navigation and a device that has phone numbers of every Playboy cover girl for the last ten years. Okay, not the last bit.

The Gold Wing is Honda’s flagship as well (though it’s yet to be launched in India, but soon will be) and has been in the business for a few decades now. It’s even larger than the Harley, in fact, and it weighs as much as a fully grown elephant. Well, almost. The Gold Wing, too, has a massive, torquey engine which is butter-smooth and many smartly designed hard luggage bins and cases. The seats have been designed by someone who would call the business-class seats on an Emirates A380 ‘austere’, and the dash layout was designed by another man, who must have been a complete control freak.

Here’s why. First, there are the regular buttons for various media functions, which is great. But it starts to get serious, because there are buttons for the cruise control and, well, the reverse gear. There are jog dials, too, and even a button that says ‘Pop Culture’ (what on Earth was he thinking?!). You will also find, an hour later, switches that adjust suspension preload, set navigation and, for absolutely no reason, a button that simply bears the letter ‘U’. I have no idea what it does, in the same way that I have no idea what most of the buttons on the Gold Wing do. Such as the ones that say ‘TA’ or ‘AF’ or, weirdly, ‘News’. It probably is an anagram of sorts, and because decoding it will mean taking your eyes of the road and ultimately riding head-on into an oncoming truck (smashing the truck to pieces), there is even a tank-mounted airbag. The Gold Wing, then, fits the image of the stereotypical American single male. Lounge around the house, own every gadget and chug copious amounts of Bud Light (almost forgot, there’s a bottle/can holder, too, but use it responsibly).

All of this makes for good bar talk, but what about that functionality and purpose we talked about? I’ll start with the Street Glide. Now, I quite like big Harleys (my favourite still being the Heritage Softail) and the ‘Glide qualifies as one with distinct ease. I must disclose my initial nervousness at the prospect of riding it in Delhi, but two hours of limb-roasting 1-2-N-1-N-1-2 riding in peak hour traffic later, I was exceptionally amazed with the ‘Glide’s rideability and equally dehydrated, too, if I may add. Within the first 10 minutes, the animosity evaporates, and thereon, you’re the most badass thing in town. The torquey motor means you can stay in higher gears even at low speeds and I particularly love the exhaust note at the mid-range point — a characteristic Harley feature, if I may add.

The ‘Glide’s suspension is a tad thrashy at low speeds but evens out as speeds rise. The riding position is spot-on, the seat, ample, and it’s the kind of motorcycle that gives you aspirational visions of riding past abandoned Chevrolets and neon-lit signboards on long winding American highways, only to stop, time and again, for Coke, cigarettes and gas. If a Harley-Davidson is your kind of bike, you will make beautiful memories out of riding the Street Glide. I would buy one if I could.

The Gold Wing, of course, adds more drama to the picture. Once you get past the Herculean task of lifting it off the side stand, that is. The straight-six fires up in the most refined manner and once Jaspreet was reasonably convinced that I would, indeed, return with his prized possession, I snuck it into first and wobbled out of sight. I’m intimidated at first, but the Gold Wing was quick to break the ice. Minutes later, I wobbled into a feet-up U-turn, and then wobbled into a corner and out of it. I’m sorry about all that wobbling but, hey, this motorcycle is as large as most apartments in Monaco, and about as expensive, too.

But as much of a giant the Gold Wing is, it’s gentle and mild-mannered. Everything happens in hushed tones and with as much precision as possible. The fully-adjustable suspension is extremely supple and will take the worst of our roads in its stride. It is also supremely comfortable, but that is where things get a bit controversial. You see, it’s so refined and soft, it feels like an SUV, which is a type of overgrown car. Yes, on that long American highway, it’s the Gold Wing that’s less likely to break down and if you run broke and want a trade-in, the ‘Glide will fetch you a pack of Marlboros, while the ‘Wing might get you that and half a donkey, which will serve you no purpose, much like all those buttons you were used to anyway. But still, all the gizmos and electro-wizardry (and an over-refined engine) somewhat take away the mechanical feel that is so important to most motorcycle enthusiasts. Still, it’s not without reason that the Gold Wing is so popular in all of America and the Middle East, so to each his own, I’d say.

Is there really a better motorcycle between these two? No. Each, as I hope to have established, has its own charm and strength, but it would be hard to pick a winner. However, let’s just say that on a thousand-mile ride, I’d choose the Street Glide over the Gold Wing, in the same way that I would choose to eat animals over grains and choose to wear blue jeans over coloured trousers. Then again, I don’t have swag, so who am I to judge?