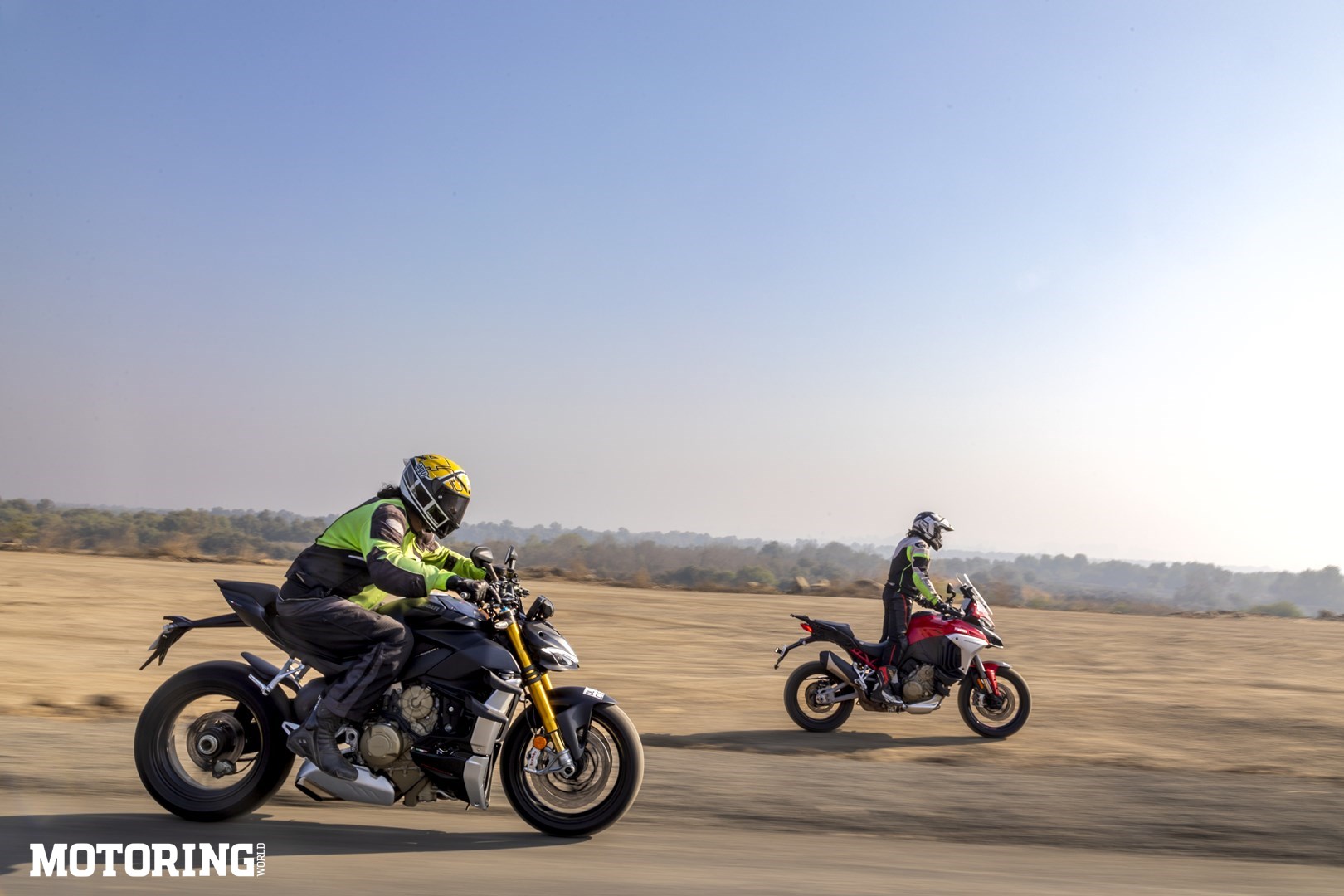 The sun’s already up and there is not even a cloud in sight. As time passes, the temperature is rising and it is getting hotter and hotter. I can feel the sweat forming on my forehead and my back while I am all kitted up. But that is the least of my concerns, because there’s an engine buzzing between my legs which is also doing exactly the same thing. In a scenario like this, the only correct way to beat the heat is to go faster and faster. And that, my friend, is the Summer of Speed.

We at Motoring love machines that are fast and loud, but more importantly, the ones that are soulful in delivering the very emotion of speed. While Japanese bikes are superbly efficient and clinical in the way they run, the Italians are also gifted with an eye for design and emotion. It is where form takes over function. With those lines, I couldn’t think of anything else but Ducatis. Besides being a formidable championship winner in MotoGP, Ducati is an old motorcycle brand that has come a long way in building motorcycles. It is a name that has been responsible for offering us some of the most iconic motorcycles ever created that have been the ultimate pinup girls of nearly every motorcyclist’s boyhood. Hailing from the northern part of Italy from the city of Bologna with two machines, one draped in red and the other in black, it was time to play a game of checkers with them.

While one simply means many roads, the other’s name is self-explanatory as a tough belligerent motorcycle ready to pick a fight with anyone who dares cross its path. I give you the Multistrada V4 S, an extremely versatile motorcycle that I like to refer to as a chameleon, able to adapt to almost any road condition or environment. The second one is the Streetfighter V4 S, a sibling of Ducati’s flagship Panigale V4 S minus the aerodynamic fairing and is an absolute mayhem of a machine. These are the kind of machines that you simply don’t just buy, sell and then upgrade further. They are the ones that hold the top tier, and it is more of a sense of pride and validation to have in your garage. Once you go Italian, you never go back. 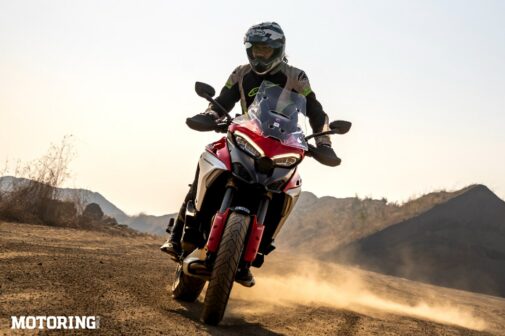 These behemoths have a lot in common besides their characters. The most obvious one is the V4 motor that powers these machines. Introduced with the Panigale, the V4 mill dictates Ducati’s new arsenal offering a wide spectrum of applications. On the Streetfighter V4 S, the motor carries the Desmosedici Stradale badge like the one seen on its faired sibling. Over here, the motor is tuned to deliver 208 bhp that sits in the aluminium monocoque making it one of the most powerful naked production bikes in the world. One can feel that power right from the time you thumb that starter. While I have no clue how Ducati managed to clear the exhaust note with authorities, I am glad that they managed to do so. The bike is not only immensely potent but also more muscular here.

The Multistrada V4 S, surprisingly, used the same motor but has undergone a few changes to meet the requirement it is expected to deliver. The same V4 motor over here has a displacement of 1158cc which is the second largest after the XDiavel in Ducati’s current portfolio. The motor is rated to produce 167 bhp which is achieved at a much lower rev band compared to the Streetfighter. The badge on the Multistrada’s engine cover says V4 Grantourismo which denotes the versatility of the motor to perform at its best on multiple road surfaces while maintaining optimum performance at all times. 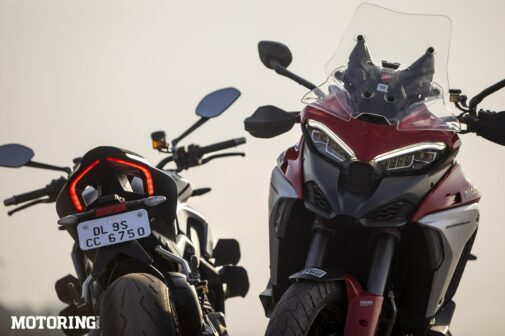 Both motorcycles are packed to the brim with electronic aids that can completely transform the nature and intensity of power delivery. While the Streetfighter comes with three riding modes (Street, Sport and Race), each can be configured individually for multiple parameters. Additionally, since the model here is the top of the line S variant, it comes with semi-active suspension wherein the damping and compression can be adjusted by clicking a few buttons. While the Streetfighter has all the possible rider aids to let the rider keep all of that power in control, what it also has is a function called Ducati Slide Control, which with the help of the 6D IMU allows a level of slide every time you go hard on that throttle, while exiting out from a corner. Furthermore, if you have noticed, the Streetfighter comes with winglets that have been derived from MotoGP bikes that help keep the bike planted when chasing speeds beyond the 200-kph mark. The downforce generated by the wings not only helps stabilise the bike at high speed but also contributes to improving stability while braking at the turn-in point and through the corner.

In the case of the Multistrada, it pretty much gets most of the bells and whistles that are offered on the Streetfighter. But over here, the rider aids program is slightly extensive with a total of four riding modes (Urban, Touring, Sport and Enduro), again individually configurable. Next is the top-spec Skyhook semi-active suspension which has 400 possible configurations to deliver the best riding experience as it calculates the rider and pillion load and the luggage that is being mounted on the motorcycle. In addition to that, the Multistrada V4 comes with a front and rear radar system, the first of its kind to be offered on a production motorcycle. Long hauls on this motorcycle are now available with the convenience of adaptive cruise control along with blind-spot detection. Technically, for the kind of power they possess, these motorcycles should be untameable, but they are far from it. It’s important to put the rider in full control, now more than ever before, and these machines do a fantastic job of it.

Enough of the tech talk, it’s time to close that visor, strap on these gloves and see how these bikes perform off the line. It is no news, but the Streetfighter over here that head-butts ahead with maximum aggression and determination. It’s more frantic, more energetic right from the start and you can sense the electronic restraint it has been layered with. While the motorcycle is crazy fast in accelerating till the 10,000-rpm mark, it gets even more menacing in the journey from there till the redline at 14,000 rpm. It is where the Streetfighter lets you experience the true power of that V4 mill. And it is nothing less than an orgasmic experience to feel the rush and the sensation of immense power at your command. The high-decibel exhaust gives away your rate of speed (apart from the speedometer, of course), but in terms of stress levels, the Streetfighter feels disturbingly at ease. It’s amazing how a naked motorcycle with superbike levels of power feels so sorted. 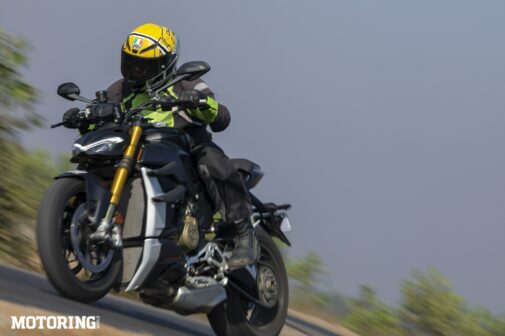 The Multistrada, on the other hand, is relatively more conservative in the way it lays down power. Or at least that’s what it wants you to think when you let out the clutch in first gear. It feels all calm and composed through all the cogs, provided you are riding it below the 6000-rpm mark. Because all you need is to be fully committed to being ham-fisted on the throttle and you will be greeted with a spectacular experience. The tall and broad dimensions of the Multistrada suddenly appear to have shrunken somehow as the bike flows through gaps with absolutely no qualms whatsoever. That said, either motorcycle will accelerate from 0 to 100 kph in a shade over 3 seconds and with top speeds limited to 250 kph on the sports tourer and 299 kph on the street naked. 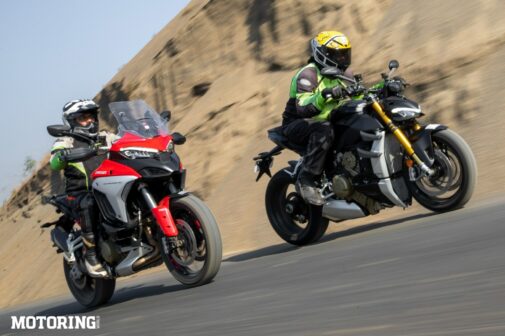 Despite the different styles, both motorcycles ace it in terms of handling. While the Streetfighter feels all-natural around corners asking to push harder and faster every time, the experience of doing so gets better with more and more time spent riding it. In the case of the Multistrada, it is simply mindboggling how a motorcycle of this size manages to corner so well and changes lanes in a snap. Also, to shed speeds both bikes are equipped with the best braking hardware from Brembo. And to compliment them are the Pirelli rubber that does nothing but an excellent job of keeping the sticky side well in contact with the surface below. 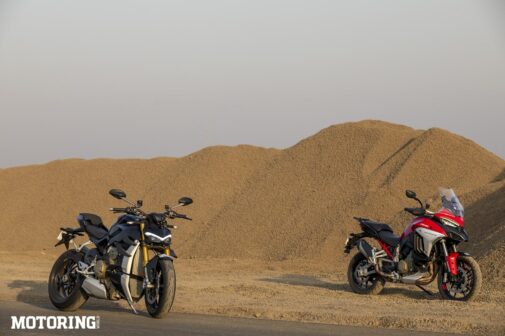 So, between the two, is there a better one that one should consider to pick, then? If you were to solely go by the specification sheet, the Streetfighter has the bigger numbers which makes it undoubtedly the quicker, faster and more exotic one. But, in the real world, the Multistrada is more versatile, friendlier, and will let you cover a few more miles and with energy in store at the end of the day. That said, it all comes down to what kind of riding you intend to do and the environment you plan to ride a motorcycle in. Because in terms of sticker price there is hardly a difference of a lakh between them. No matter which one you pick, in the end, the sun will continue to shine on top of your head and the only way to beat the heat is by going faster and faster. And that can never be a problem, can it?