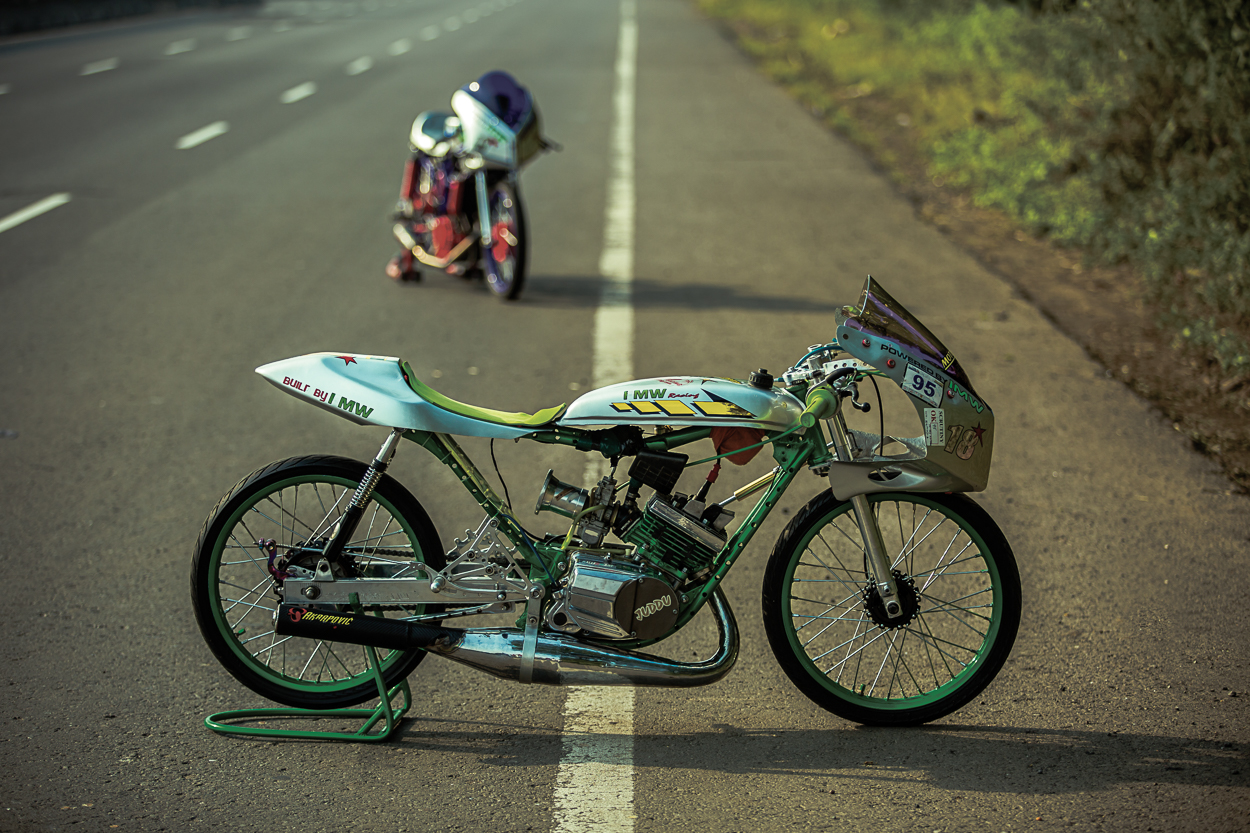 It’s evening time and there are several motorcycles parked besides each other just outside the IMW Racing workshop. While most them were parked for display, some were being worked upon. A few steps inside the workshop, a mechanic was carefully installing different parts onto the freshly painted red frame. It had a Pulsar 220 engine and that was about all that I could recognise looking at the machine. All the other components like the wheels, swingarm and suspension were unlike what you’d expect on a Bajaj. It was the assembly of a drag-spec motorcycle in progress. The reason to be there was because in just two days I would be riding two custom-built drag-spec bikes for the very first time. What better reason can one think of to not head to a workshop like this? 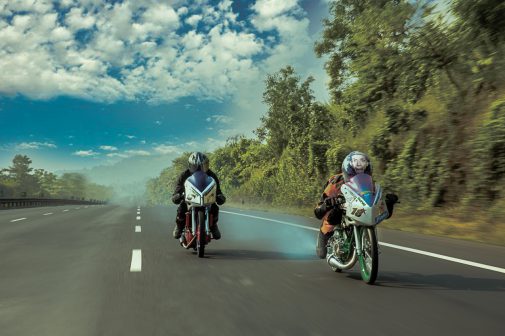 As I was observing the other bikes in the workshop, Iqbal Shaikh, the man behind building all the drag bikes under the IMW Racing name comes out of his office. Behind him, stacked on shelves are several trophies from his wins in drag racing championships. While I was already impressed by the workmanship on the upcoming red drag bike, he invited me into his office to see a bike standing in a corner, sporting a blue trellis frame with silver body panels and red highlights. It is only after I got close enough that I realised it was a Duke 200 engine mounted onto a drag chassis. The attention to detail was fantastic as even the thin brackets holding the delicate fairing were buffed to a sparkling shine. After being engrossed for some time observing the details of this motorcycle, Iqbal informs me about the other drag-spec bike, an RX-135 weighing only 54 kg and with even skinnier tyres. It was ready, but was kept at his house since it is his prized possession.

Fast-forwarding to the day of the shoot, I finally got to see both bikes, especially the RX-135. The Yamaha can easily be called a gleaming piece of art just like Iqbal had described the other day. As I was in the process of being awestruck by the detailing on the bike, Iqbal got on the Duke for a warm-up run, only to return with a missing brake pedal that fell off halfway through the run. It’s a part and parcel of building these bikes which he says is necessary after every build. After quickly fixing it with a makeshift brake pedal using two nuts and a bolt, the bike was back in action.

First up was the Duke 200, standing little less than three feet above the ground, getting accustomed to the riding posture itself was a task. After adjusting myself to the seat which had absolutely no cushioning, I cranked the engine up with the ignition button located beside the meter. The motor came to life with a deep exhaust note that got louder every time I revved it. After getting familiar with the clutch via a few runs, I crouched and got ready to launch a bike for the very first time. I held the rpm close to 3000 revs and let the clutch go. The front lifted slightly, but was quickly back down, and the bike shot ahead with every gear change to build more speed like a predator going for the kill. Within seconds I was already over 100 kph with one more gear left. I upshifted to the last cog and rolled off the throttle as the sudden rush of speed was completely unexpected.

After recovering from the sudden rush of adrenaline it was time for another run but this time on the RX. Two-strokes are known for their infamous powerbands, so I had to muster a bit more courage to get on it. This one was even lower to the ground than the Duke and had an even more committed riding position. So much is the attention given to weight loss, it doesn’t even have a kick starter; you always have to bump start it. After stalling it a number of times, I finally got the hang of the clutch and braced myself for what I knew was coming. With an empty road ahead of me, I lined up with my chest resting on the fuel tank, gearbox engaged in first and working the throttle to hold a constant rpm.

A bit scared already, I let go of the clutch and in an instant, there was a sudden blast of raw power that almost threw me off the bike. The front end of the bike luckily remained straight thanks to the steering damper, but it was still light as all the weight had shifted to the rear. There was no speedometer to know what speed I was doing, just the view of the thin front wheel keeping the bike in a straight line. The feeling was very scary, but also something out of the realms of the normal world that I live in. While this run was without opening the throttle completely, I could only imagine what would happen if given the full whack. No, there was no way I was going to try that.

As I stood wondering about what had just happened, I couldn’t help but be amazed by the potential both these machines were capable of. While the KTM was notably faster once it gained momentum, the Yamaha seemed like it ran on 2T mixed with sheer madness. It came across as hard to control with every single gearshift. It is still impressive to see first-hand that in spite of two-stroke technology being much older than four-stroke machinery, it still outperforms the latter clearly in terms of sheer power and speed. The emotion and fun factor involved in riding a two-stroke is something that cannot be replicated with a four-stroke machine. On that note, Iqbal started up the Yamaha, revving it up for his fix of 2T-infused speed. 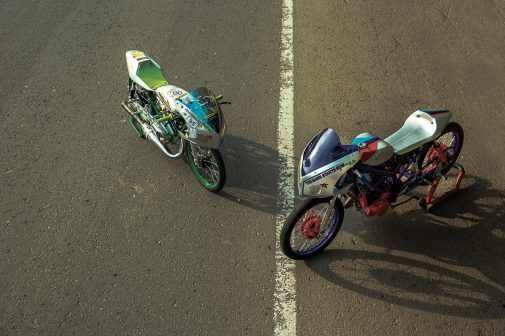 We would like to thank Iqbal Shaikh and his team at IMW Racing for building such unbelievably fast machines on two wheels. If you want the motorcycle of your dreams, call them on +91 9819441818.