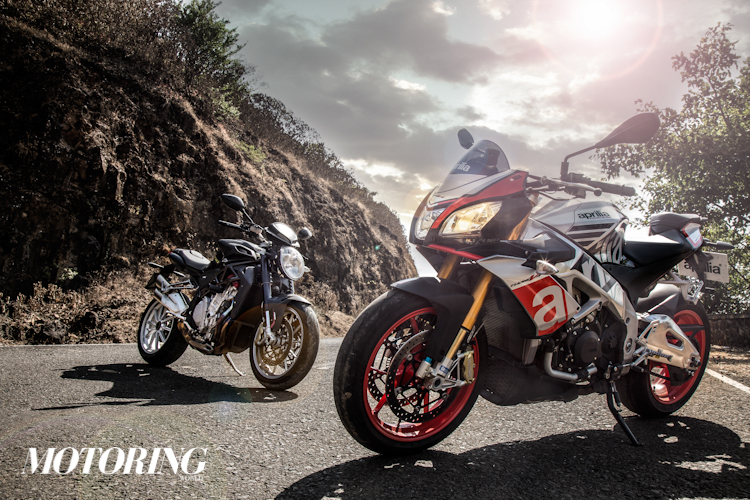 The sun’s blazing down on us at an unforgiving 44 degrees Celsius. There’s hardly a cloud in sight and I’m pretty much roasting in my leathers. This sort of heat is inhuman. And there’s an engine buzzing between my legs which is only generating more of that stuff. The only way to keep cool is to simulate a breeze, to go faster and faster. This is, quite literally, a summer of speed.

Days like these are pretty surreal. Yes, big-displacement motorcycles are no longer the rarity they once used to be, but to have the ignition keys to two of the world’s most exotic naked streetfighters on the same day creates an emotion that I cannot articulate in print. It’s too overwhelming, too unbelievable. The two motorcycles you see here have been the ultimate pin-up girls of nearly every motorcyclist’s boyhood and therefore objectivity might have to take the backseat this one time. It’s time to celebrate two machines that hail from a country infamous for speed – Italy.

Named after thunder and brutality – guess why? – the two motorcycles you see here are extremely special. One, the Aprilia Tuono V4 1100 Factory, is nearly a race bike in a bikini while the other, the MV Agusta Brutale 1090, is the motorcycle equivalent of pornography. These aren’t motorcycles you buy, sell and upgrade from. You attain them. It’s a validation of your superiority. It’s what sets you apart from everything else. Once you go Italian, you have nowhere else to go. It’s just so futile to even try.

The four-cylinder engine has given us enthusiasts much to rejoice about, but it never gets as extreme and yet as equally irresistible as it does with the motors on these two motorcycles. The Aprilia lays its four in the shape of a ‘V’, a format that has brought it much success in motorsport circles courtesy the RSV4 superbike, and the Tuono, naturally, is not too dissimilar from its race-winning sibling. A rather vocal herd of 175 horses live within that twin-spar frame and with 12.3 kgm of torque being churned out, it’s not only immensely potent but also the more muscular of the two. Sorry to give it away so soon!

The MV, contrastingly, uses its four-cylinder motor in a more conventional inline format – the most proven of them all. The 1090cc motor is the largest in the MV Agusta stable – larger than even the delectable F4’s – but it’s not as fearsome as you’d imagine it to be. With 142 bhp (at the crank) coming into play at 10,300 rpm and also a very generous 11.4 kgm on offer, the Brutale’s motor is not as intimidating as the Tuono’s – on paper, at least – but it kind of makes up for it in terms of linearity and refinement. Can’t go wrong with an inline-four, can you?

While the fight is lopsided on paper, this is (thankfully) not how it translates into the real world. With motorcycles like these, engineering accounts for a lot in terms of performance, which is more than merely a by-product of output figures. Look at it this way, and the Tuono and Brutale are almost evenly matched. With similar electronic rider assists – riding modes, eight levels of traction control and ABS (plus wheelie control and a rear-wheel anti-lift function for the Aprilia) – you can tell these machines are pushing the limits of usable performance. Technically, motorcycles like these should be untameable, but they aren’t. It’s important to put the rider in full control, now more than ever before, and these machines do a fantastic job of it.

It’s all rather apparent when you fire them up. The MV assumes a characteristically sweet, bassy inline-four note, its howl not very distinct yet intensely addictive. The Aprilia goes for a more dramatic tone, clearing its throat without an ounce of social etiquette – it really is like the sound of thunder. Both 6-speed transmissions are slick to a fault, but the Tuono has the added advantage of a quickshifter, definitely the best way to go on a rampage through a gearbox.

Off the line, then, it is the Tuono that head-butts the wind with more agility. It’s more frantic, more energetic right from the start and you can sense the electronic restrain it has been layered with. You will also be quick enough to be thankful for it, since the Tuono almost feels limitlessly fast. It’s only the high-decibel exhaust that gives away your rate of progress (apart from the speedometer, of course), but in terms of stress levels the Tuono is disturbingly at ease. It’s amazing how a naked motorcycle with superbike-levels of power feels so sorted.

The Brutale is relatively more conservative in the way it lays down power. Or at least that’s what you think when you let out the clutch in first gear. Maybe it’s the way it sounds or, perhaps, even the way it looks, but it just doesn’t feel as aggressive as the Tuono. That’s not to say it lacks a punch, mind you. You just need to be fully committed to being ham-fisted on the Brutale and thereafter, you’re treated to quite a spectacle. The Brutale is genuinely, frighteningly fast, although, thanks to its engine layout, it doesn’t feel as busy as the Tuono. That said, either motorcycle will accelerate from 0 to 100 kph in a shade over 3 seconds and with top speeds nearly in the 300 kph region (well, almost), there’s only one thing that will separate the two on very defined lines – the handling!

If you come from the more conventional school of naked motorcycles, you will find the Tuono a bit odd. It’s got a pretty flat handlebar which seats you in a rather pronounced crouch – a bit too race bike-y, to be honest – but you probably need it to do justice to its cornering potential. The aluminium dual-beam frame is definitely the most well-engineered in its class and that lends the Tuono such natural handling capability, you’ll outdo yourself without even trying. The fully-adjustable suspension works beautifully and manic changes in direction are dealt with absolute precision. With sharp (and lovably progressive) brakes and well-meaning rubber at either end, the Tuono is a dream to ride fast. A bit too good to be true, if I can be honest.

Despite opting for a steel tubular frame, the Brutale is the lighter of the two here, even if just by a kilo. This, however, doesn’t grant it any favours over the Tuono in terms of agility, something that’s undoubtedly down to MV’s lack of exposure to modern-day racing. While the Tuono is at the receiving end of telemetric data courtesy the RSV4, the Brutale has no such reference material and so, it’s more hands-on when it comes to cornering. It’s in no way limiting, whatever your riding style, but you have work just a wee bit harder to stick to the your line. I find it easier to ride the Brutale harder – the Tuono is almost clinical – but that’s mostly down to my lack of skill and my un-racerlike physique. The Brutale also has the smaller brakes of the two, but thanks to the fantastic Pirelli rubber, it’s not a very threatening hindrance.

So, is there really a better of the two motorcycles here, then? If you go solely by what the specification sheet has to say, then the Aprilia is the one. It’s undoubtedly quicker, more agile and more sophisticated, but then objectivity is not what will compel you to shell out Rs 20 lakh for a motorcycle, right? The MV is definitely inferior on paper, but it has the advantage of a friendlier, less-busy motor and an overall package that’s easier to adapt to, keeping in mind the target buyer – not your everyday 20-something wannabe racer, that is. You may prefer one over the other and that’s bound to happen, but neither of you will be the loser. Far from it. On motorcycles like these, the sun will always shine bright above you and the only way to beat the heat will be to go faster and faster. It’s like riding in a 365-day summer of speed. And you just can’t have a problem with that, can you?